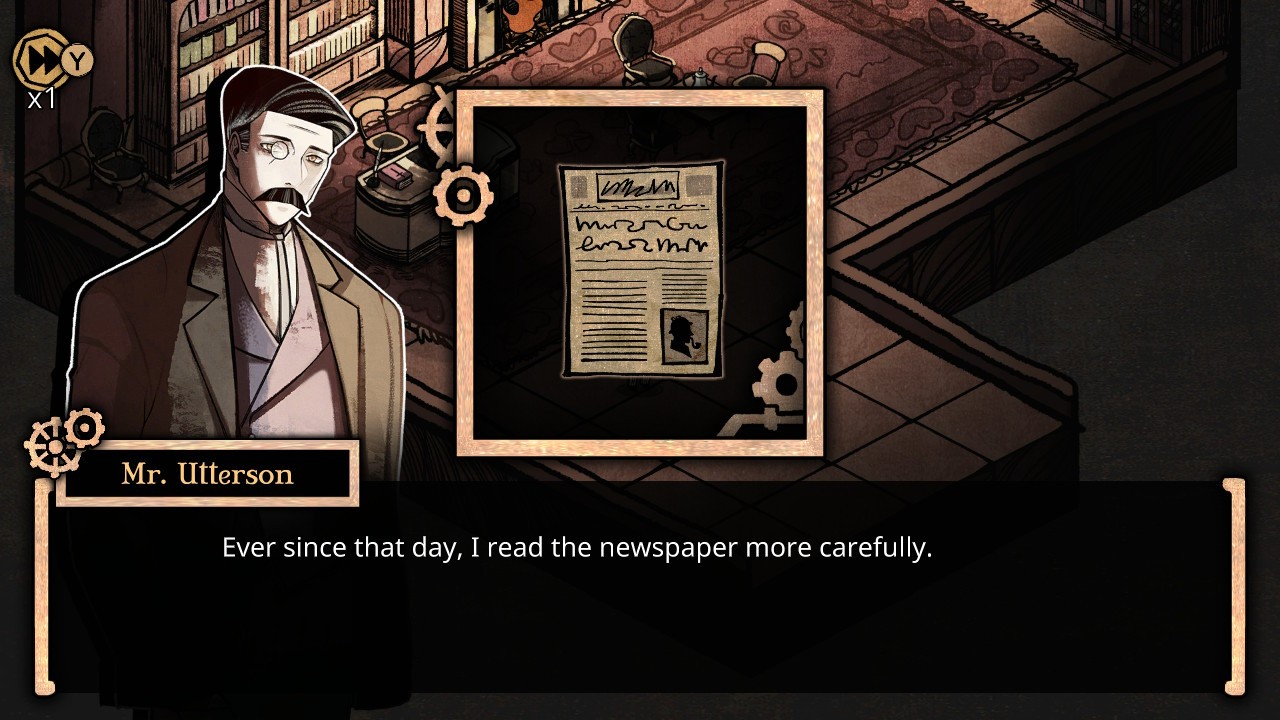 It’s not every day you get to play a literal classic, but the people at Growing Seeds Corp have their re-imagining of Robert Louis Stevenson’s 1886 infamous novel Strange Case of Dr. Jekyll and Mr. Hyde, released on the Switch in MazM: Jekyll and Hyde.

Arguably one of the greatest stories from the mystery genre, Jekyll and Hyde has been covered countless times by other mediums – whether it be plays, TV shows or even videogames, such as the NES in 1988 with Dr. Jekyll and Mr. Hyde. Already a successful series, the MazM collection covers a variety of well-known stories that include the Wizard of Oz and also the Phantom of the Opera. How the latter would translate as a game is interesting.

Before MazM: Jekyll and Hyde came out on the Switch, it was quite popular on mobiles – which seems appropriate at first, as the game does feel like a port, but dive a couple of hours in, and it’s fair to say that it’s quite a feat getting this game to fit on a smaller device.

MazM: Jekyll and Hyde is an RPG adventure split into various cases. Leading in from the tutorial, you complete multiple segments from the novel, piecing together clues as to who the perpetrator is of these vicious crimes etc. by interacting with various items and speaking with NPCs. All dialogue is conducted in a visual novel style, though the main game is a little like a point and click adventure. The visual style didn’t grab me at first. I wasn’t a fan of the dialogue characters (a.k.a. the static images of whichever character is talking). Still, the in-game models are quite charming with slightly oversized heads bearing a slight comparison to Don’t Starve – a decent compliment. 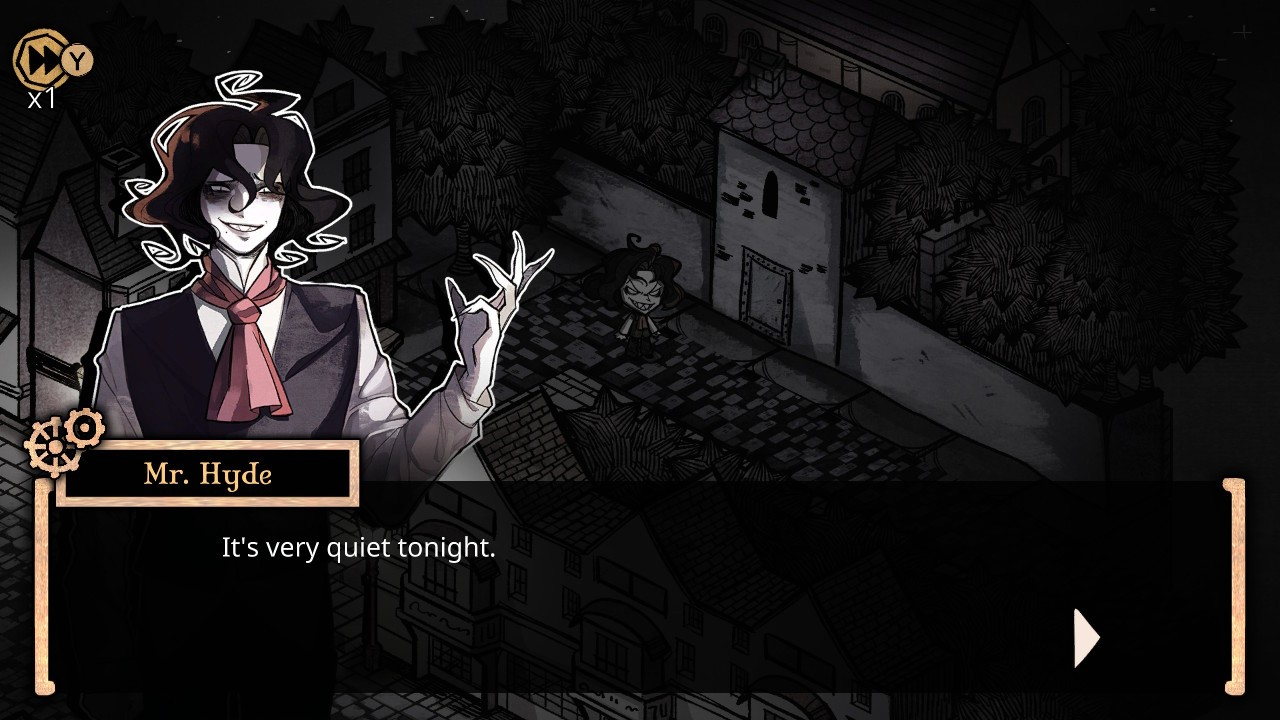 Controlling each character handles well – not that you need quick responses as due to the nature of the genre, you can comfortably take your time. Besides, you need to apply your detective work and uncover clues. When it comes to the menu systems, that’s when it started to slip almost immediately for me.

There are icons covering the screen indicating which button to press to bring up a list of clues, inventory and such. However, when you do bring up these menus, you can only really view one at a time without scrolling from one to another. What that means is you can look up clues, but need to press the B button to exit the said menu, then go back into the next menu for the inventory, and so on. When first getting accustomed to the game and also referring back to the notes on the evidence you have found, this happens a lot and to say it’s annoying is a bit of an understatement. As long as you don’t go into the menus, you’ll be ok. But, considering that you need to do this regularly is testament to how important it was to get this right.

Another thing I noted was the actual dialogue. As MazM: Jekyll and Hyde’s source material is a real masterpiece; it was quite unusual how erratic the conversations could be. It wasn’t that there were grammatical errors and spelling mistakes, more so, it felt unnatural and the characters speaking were a little inconsistent with what they said. When you think that these characters are already well established, it’s surprising to have quite a few continuity errors.

However, the world that has been created here is excellent. 19th-century material is always painted as bleak and desperate, but the character designs and environments have this certain charm to them and to some degree, are… cute. Even when (hardly a spoiler) Mr Hyde makes his appearance, this anti-hero is pretty likeable – like a Tim Burton creation, only with a bit more energy. The palette of the game is mostly greys and sepia but for some reason, have this particular vibe about them that you want to stay in the world solving puzzles. 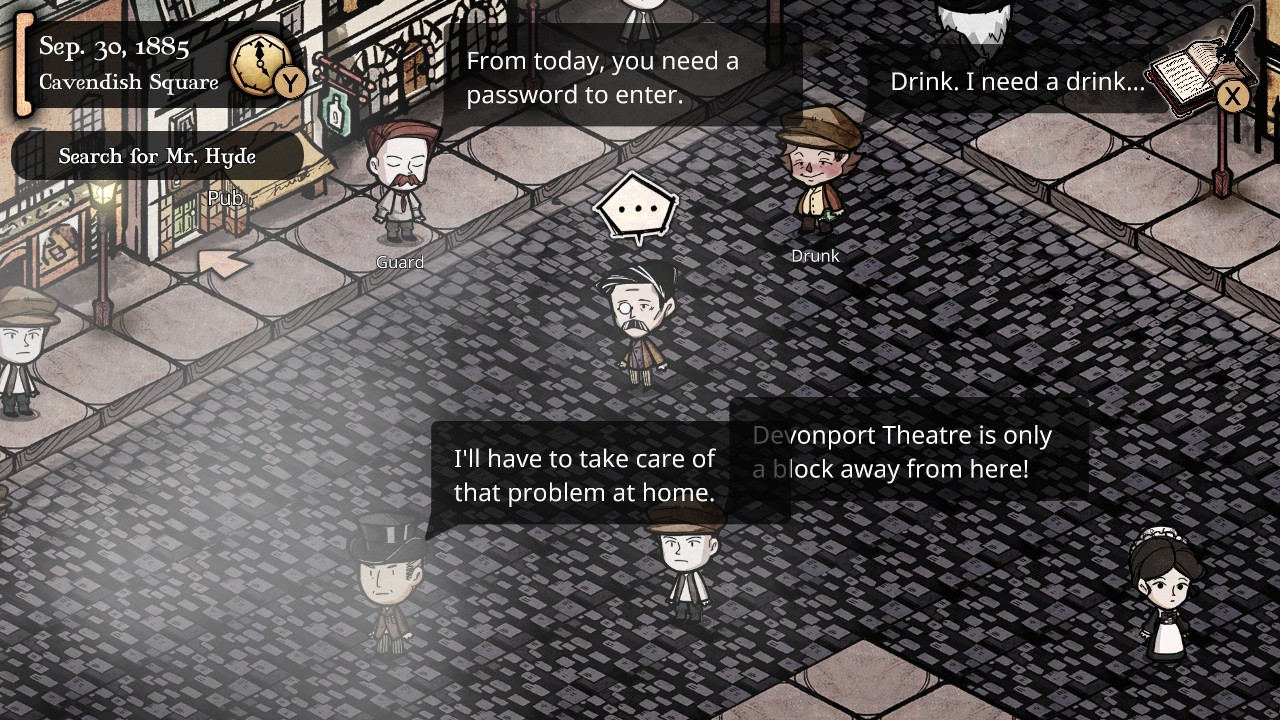 Several narrative paths take place from Mr Utterson – the person tracking down Hyde, to Hyde himself who seems to be a menace to society, smashing everything to bits that gets in his path, including people. I was quite surprised how many opportunities are being missed with interaction, as a lot of the time you’re in it for the ride. MazM: Jekyll and Hyde does resort back to that visual novel reference once more as you read dialogue box after dialogue box – if you’re not invested enough in the story, you’re probably going to have to give this one a miss.

For those that prefer a character-driven style of play, then there’s enough content to keep you engaged. I wouldn’t say that the game is as dark as it’s trying to portray – most likely because of the art style makes this seem like it’s aimed for a younger audience – it’s not! What makes this somewhat unique though, is the story told from different perspectives and even an ending which might not have been so evident from the start.

I’m a little on the fence with MazM: Jekyll and Hyde: on the one side it’s everything I look for in a game – character-driven, good story – even a point and click type adventure! Unfortunately, there’s also something that doesn’t quite sit right with me. Again, the game does feel like a mobile game. If I had this on my mobile, I’m sure I would get a lot more enjoyment out of it as a commuter-type scenario. But, to sit through on my Switch with the clunky control systems and unusual dialogue makes me keep thinking whether if this is a title I can recommend or not, without giving away the story. Even if you’ve read the book, expect the unexpected.

MazM: Jekyll and Hyde acknowledge the source material very well and has quite a unique approach to it. While the graphics are gorgeous and the music energetic, I wonder if it was the right approach for the feel in 1800s London. To reiterate, this game has me on the fence – a great story, but some of the game mechanics and design choices complicate it.

Great story and twist.
Charming graphics, if a little unusual for the theme.
A good deal of cases to uncover.