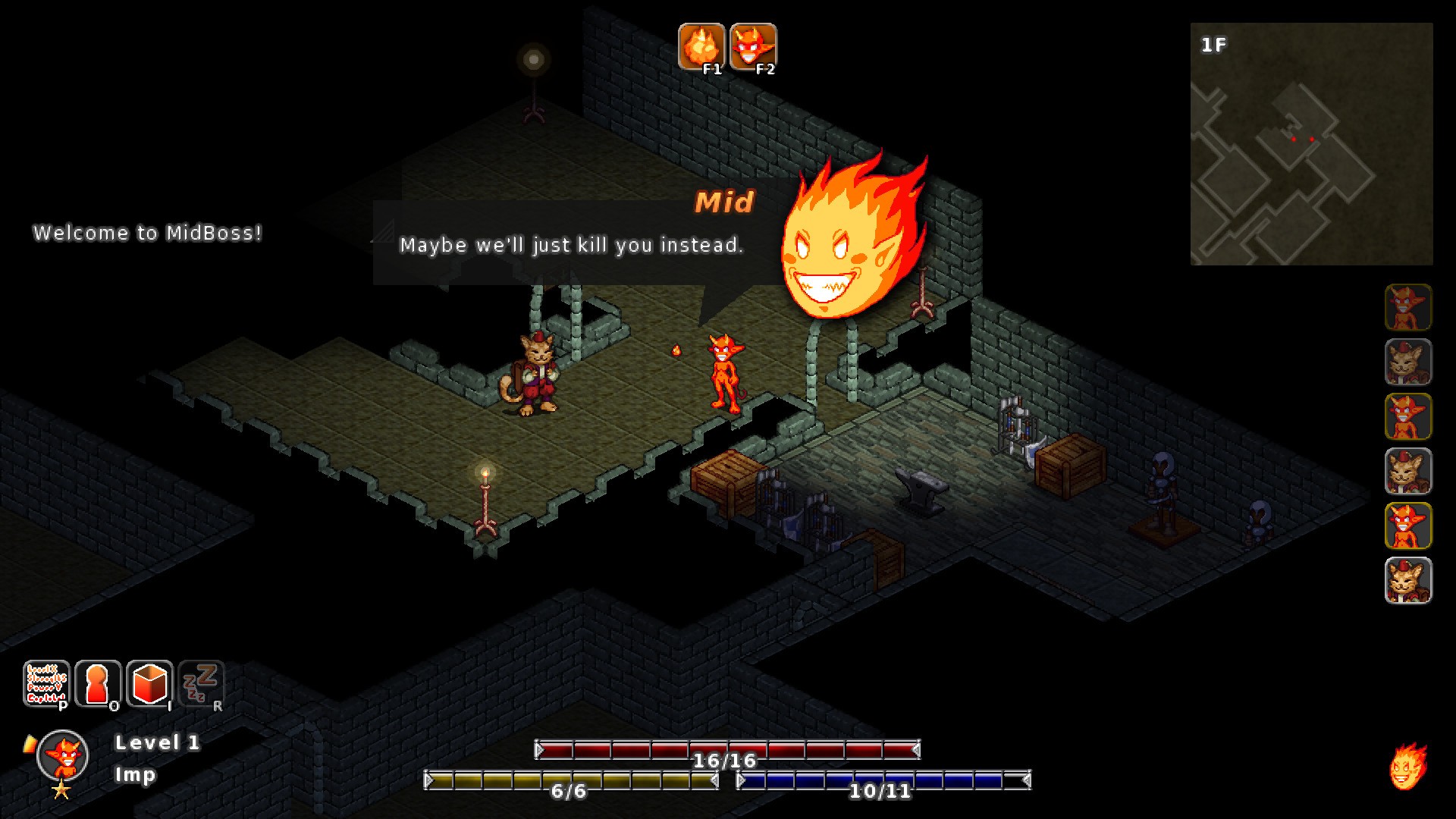 Indie games and experimentation go hand in hand; without being limited by higher-ups, indie devs can risk and try a new thing freely. Obviously this can go well or end up poorly, but a breath of fresh air is always welcome. MidBoss leans heavily on this idea, dealing with unique mechanics and design and pushing them as far as possible through a simple premise: taking over your foes’ bodies.

In MidBoss players control a lowly imp by the name of Boss, bullied by everyone and living with the rats. Luckily, Boss is accompanied by a fireball named Mid (get it? Mid and Boss, MidBoss, heh), who promptly convinces them to show the bullies who’s the real deal. As expected from a roguelike, there’s not much more to the story than this, though all other dialogues are still filled with humour and bad jokes.

The game’s graphics are alright, mostly consisting in a very retro-style pixel art. While it may not be the best it feels nostalgic, especially with the hidden modes. Most different enemies are quite unique as well, though a few, such as the different types of bats, are just re-colours. The same can’t really be said about environments, though; being in a dungeon and all they look the same mostly. 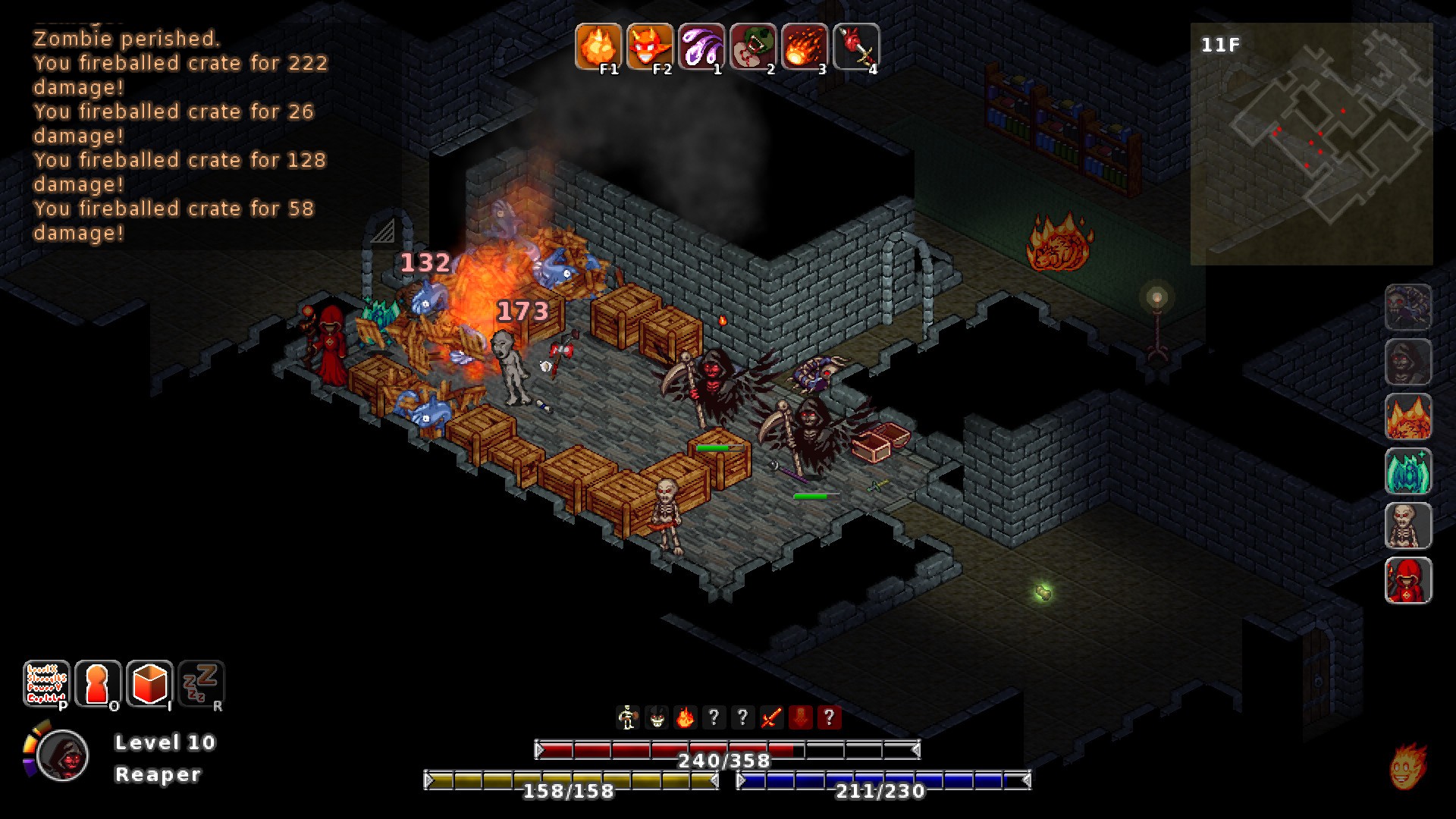 In contrast, sound is quite well covered; the game boasts an amazing soundtrack and good SFX. The soundtrack spans 16 different songs of varying length, with some lasting up to seven minutes and quite a good amount of variety. SFX are also quite well used to accompany attacks and add ambient sounds, without becoming annoying.

MidBoss’ gameplay is surprisingly deep, although most mechanics rely on the main one: possession. Boss’ main ability is a spell which, when cast on living (or simply undead) enemies, allows him to take possession of their body after their death. By doing so, the bodies acquire form points, used to master them and unlock new abilities. Once a body has been mastered, it is equipped as a sort of “passive” on Boss’ main form, granting them their abilities and some stats. These mastered forms can also be equipped on new ones, though anything further than one will temporarily decrease some stats.

After a few forms have been unlocked, the gameplay focuses on picking and mixing them depending on the build. Some abilities focus on damage, be it magical or physical, while others focus on defence, movement or ailments. The beauty of the game comes in allowing players to create their own build by combining forms, equipment and stat upgrades. These stats are quite simple to understand as well; there are four trees divided in max damage, minimum and critical damage, defence and last but not least, resources, aka health, mana, etc.

Equipment is also handled in the usual way; higher rarity equals higher stats and special effects, with other items such as potions or magic books appearing as well. Some equipable items can also be cursed, adding drawbacks to the granted stats. Luckily these curses can be purified with Holy Water, converting the malus into bonuses. 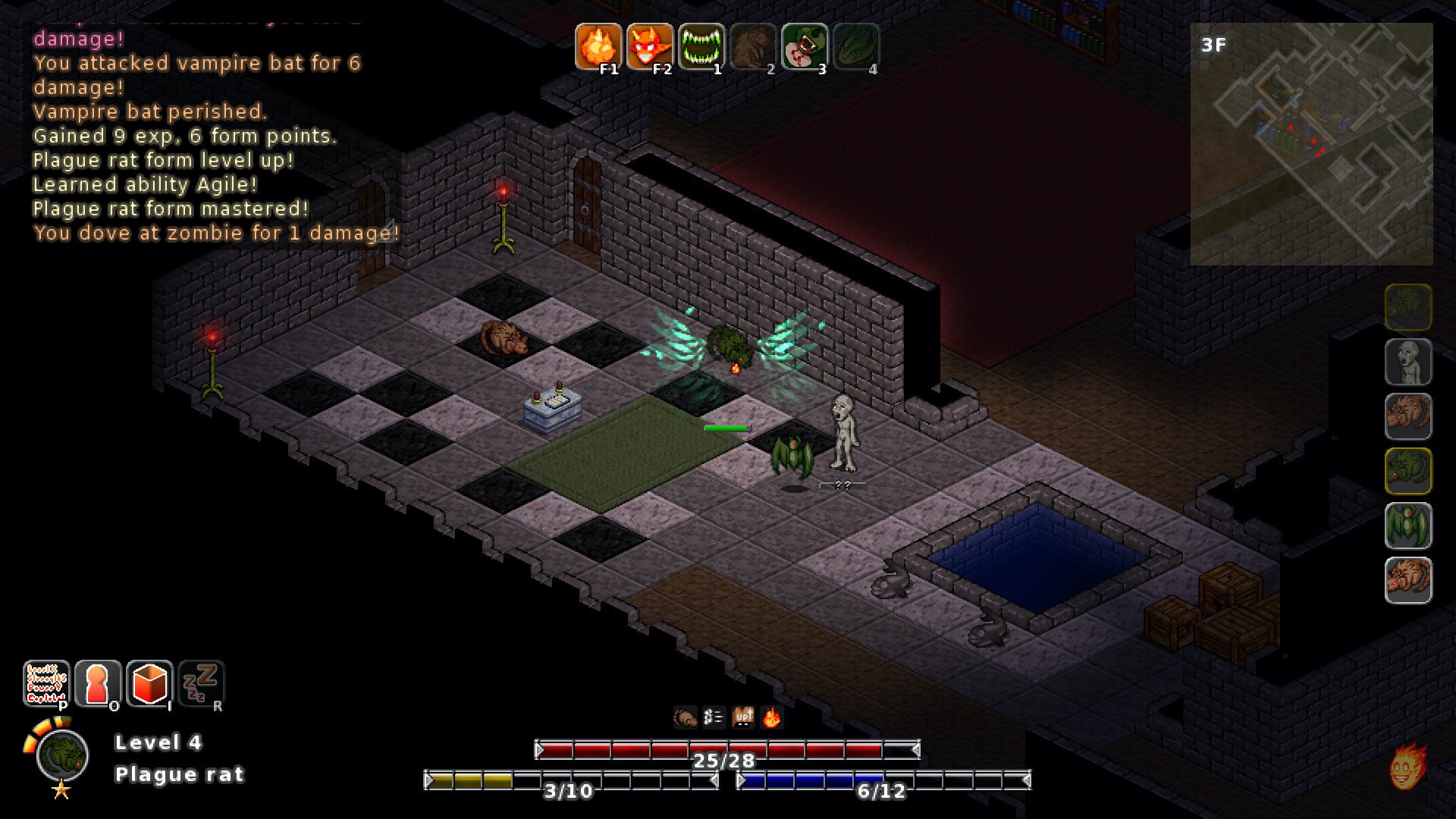 That said, certain builds don’t work really well; this particularly applies to debuff ones, such as affliction and fear. When combined with the sameyness of the first levels, it can make the game a tad repetitive. You see, once the main cycle has been mastered there isn’t much evolution; it boils down to: obtain a new form, master it for stats, repeat. It is also true the runs can be unbalanced, at times being reduced to the player completely dominating or being dominated.

MidBoss also offers several modes to play, from the classical “Hardcore” mode with permadeath, to one with collectable lives. These modes have their own difficulty settings, with even the possibility to completely customise a run. The game also includes a very interesting mechanic known as “grave goods”; thanks to it, players can save a card picturing their run after death, which will then let them choose one item from it on subsequent runs. This is completely optional, but also allows importing other runs and seeding them, adding a whole new level of control.

Overall, MidBoss is an entertaining and unique game, although far from a masterpiece; the general repetitiveness really detracts from an otherwise fun experience. Roguelike fans will most likely enjoy it as an occasional game, but not much more than that. It’s £10.99/ $14,99/€ price tag is also alright, though waiting for a sale would definitely not be a bad idea. That said, the soundtrack can be purchased independently at bandcamp or listened to on YouTube in the creator’s official channel.

Overall, MidBoss is an entertaining and unique game, although far from a masterpiece; roguelike fans will most likely enjoy it as an occasional game but not much more than that.