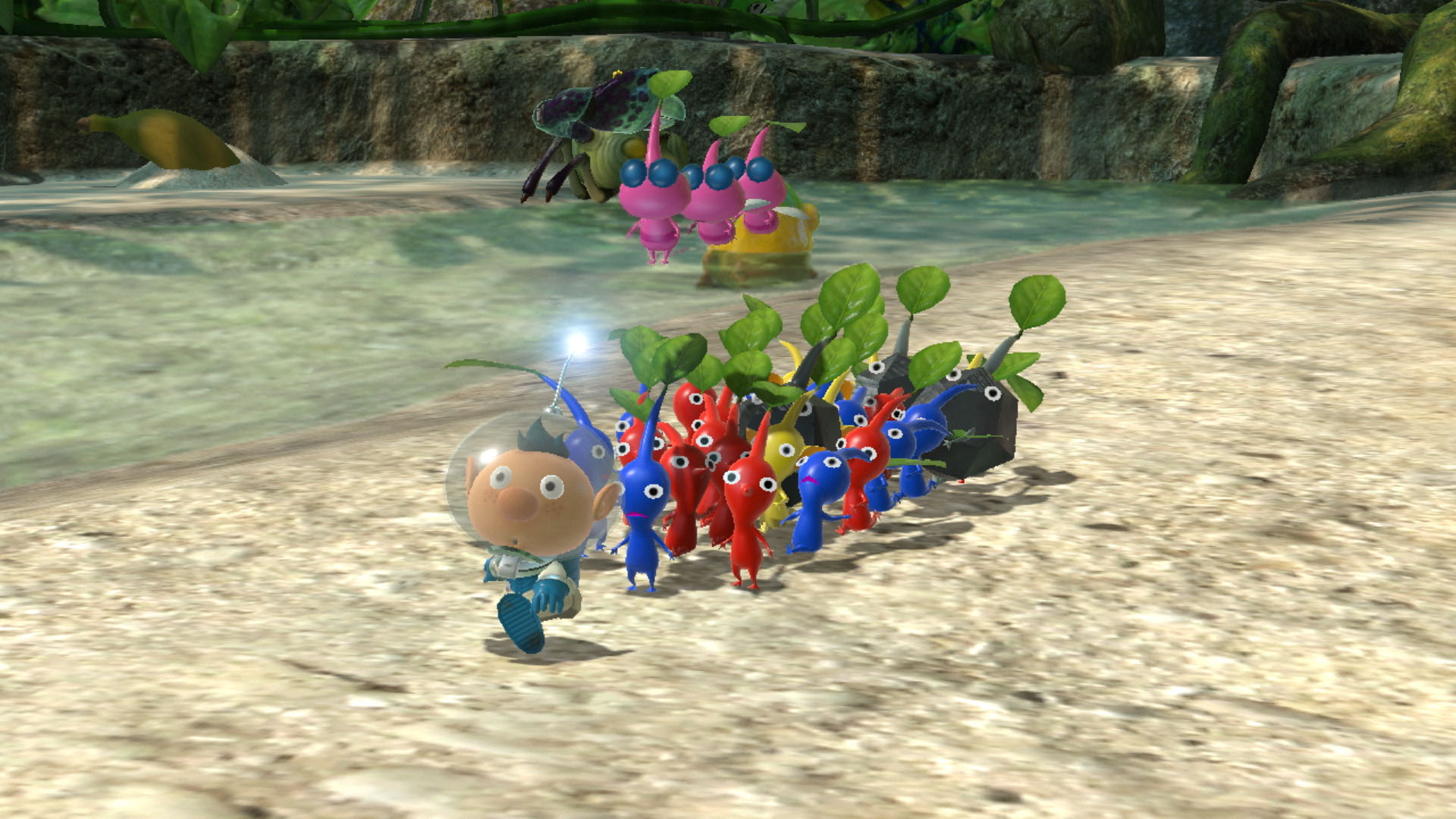 Pikmin is a series of games created in 2001 by the famous Shigeru Miyamoto, better known as Mario’s Creator. His universe talks about a species of small creatures called Pikmin, the fruit of Miyamoto’s creativity who had the brilliant idea of ​​creating the franchise by observing small ants in his yard taking objects from one place to another. Thus, his imagination began to devise the plot of a game in which small creatures would follow a leader and carry things around. Yes, the idea of ​​Pikmin has a direct connection with common everyday things, and this is brilliantly reflected in the gameplay.

The premise in Pikmin 3 Deluxe is quite simple, and speaks of a crew composed of 3 members who went to explore a planet in search of food to feed their people, who are in trouble because they’re almost in a severe hunger situation. These three are Alph, Brittany and Captain Charlie. In the first moments, we have the control of Charlie, who has just fallen unconscious on the mysterious planet and is faced with small yellow creatures that surround him, but who do not show any kind of hostility towards him. Upon discovering that small beings respond to his commands and perform actions such as removing obstacles and living threats, Charlie starts to receive help from his newest friends. Suddenly, an invisible creature appears and the captain disappears.

Then, as Alph, it is necessary to go after not only Charlie, but also Brittany, who was launched away when the ship of the three characters collided with the planet’s crust. Pikmin 3 Deluxe brings several types of Pikmin of the most varied colours that will be useful in your journey to solve puzzles, battle living enemies that try to eliminate the characters and devour the poor Pikmin – terrible scene, by the way -, besides helping our little explorers who are unable to perform any action without depending on these little creatures.

Pikmin 3 Deluxe is my first and only contact with the franchise, which was ignored by me for a long time for simply not understanding what it is all about just watching videos and images. I confess that it was love at first sight, since I consider myself a great lover of strategy games in real-time. Pikmin 3 is a mix of strategy with solving puzzles and squad management, making it possible to divide small groups of Pikmin between its three explorers in the story mode, each leading their own squad to unravel the locations of that world. Therefore, it’s necessary to plan well, since there are about 12 minutes to accomplish your mission within a stage and gather fruits enough to provide your crew some cups of juice to keep them away from starvation. After that, the day ends because the night begins to fall, and the Pikmin who are not together with our characters end up being left behind and die. 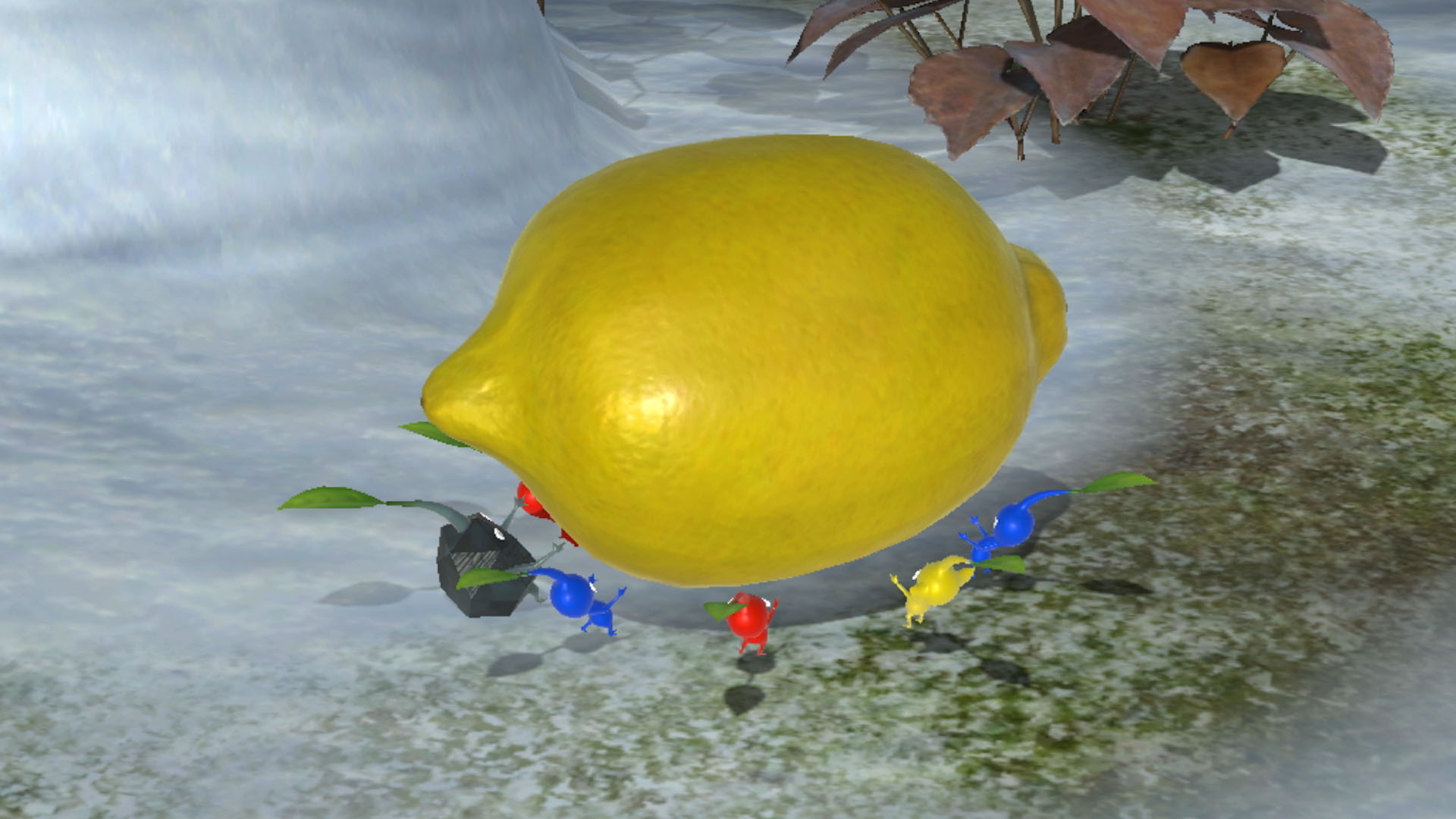 This is a great idea, but it often works better in the local co-op mode available here. The experience of double gameplay greatly increases the fun factor, and makes everything easier due to the shared strategy. Not to mention that the co-op mode does not require that both characters be together, since the screen is divided into two and each person has their individual camera. With this, it’s possible to solve the puzzles quicker, divide tasks required to advance the scenario and mainly expand your army of Pikmin in a much faster way.

Unfortunately, no online multiplayer is present, which I consider to be a terribly missed opportunity for Nintendo in such a bad situation in which we live currently, when people need to be confined to their homes to avoid contamination.

And I say more, the description of Pikmin 3 Deluxe on the Nintendo eShop gives a lot of dubious interpretation, since there is the tag “online features” available for the title and an indicator that it’s possible to play multiplayer without specifying that it’s only on the same console. Only those who really research more about the number of players offered will understand that the only real feature online that Pikmin 3 Deluxe offers is a leaderboard. Disappointing, I’d say.

There are five species of Pikmin available in the story mode: the red ones that are great warriors and resistant to fire; the yellow ones that are light and can be launched at higher places, in addition to being excellent conductors of electricity; the stoned ones that are resistant and destroy solid objects when they collide with them; the purple and winged ones that can pass key items over aquatic environments and lift objects that need to be lifted; and the blues that can breathe underwater.

Although they are all very useful at various points on the map and in the game’s progress, the Pikmin’s artificial intelligence does not prove to be so good at various times, when I noted many Pikmin walking against the wall and getting stuck in obstacles too simple to cause such locking. They also end up drowning if the player separates the squads very close to the water, as the Pikmin move away when they hear the character’s whistle. These are details, but people who are more likely to notice flaws in design are sure to complain. 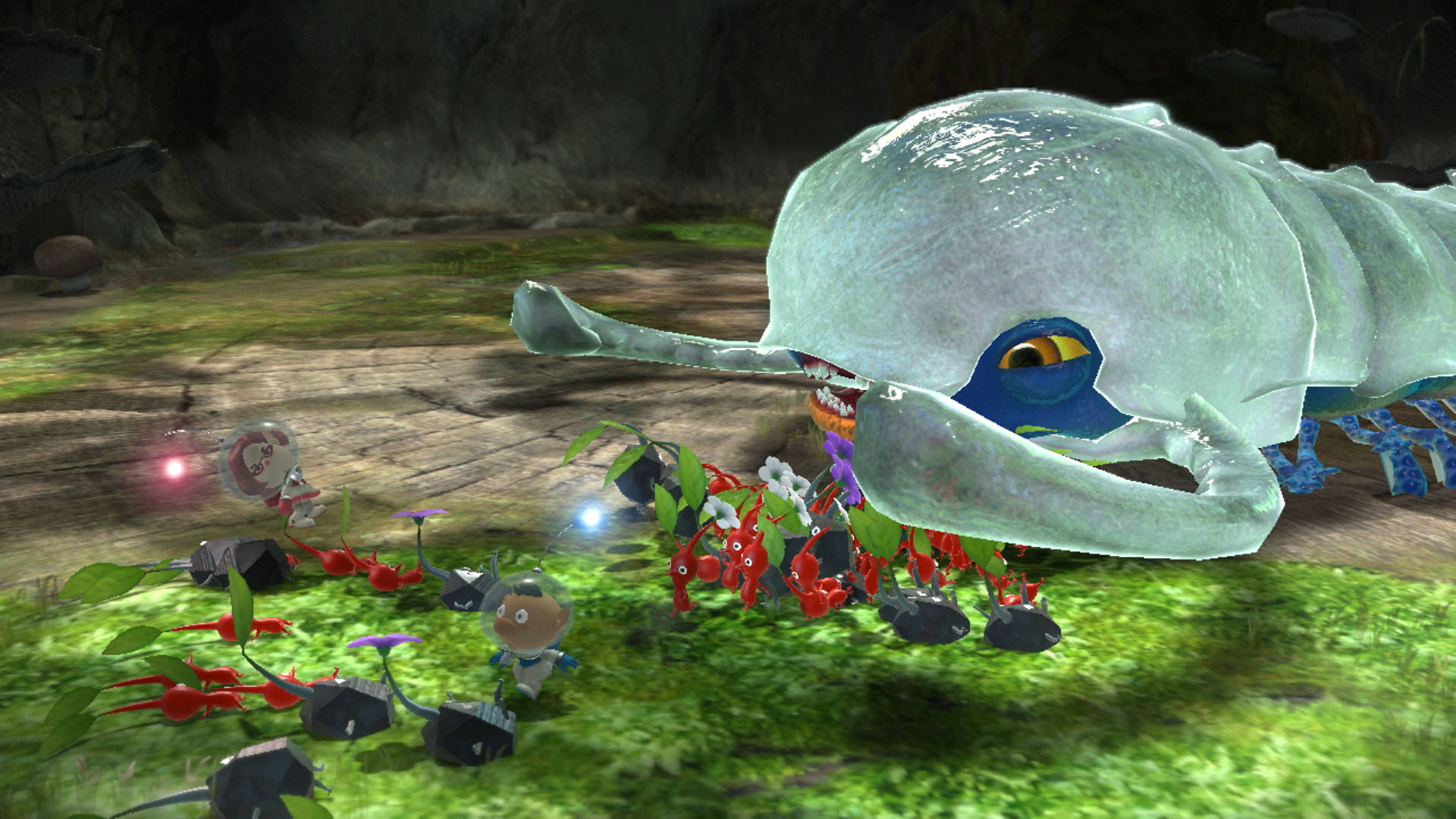 Apart from those mentioned, two extra types of Pikmin are available exclusively in the extra content, which deviates a little from the central proposal of the game and slightly changes the way of playing. The DLC lives up to the Deluxe name added to the title and brings up some characters from the previous games like Captain Olimar, but is a little out of tune compared to the mechanics of the story mode as it focuses much more on collecting Pikmin, destroying enemies, rematch bosses, collecting coins and offering a mini-game Bingo. Although fun, the extra content does not bring the feeling of progression existing in the main game, and I confess that I did not find it as exciting as the fun I had been having in the story. And speaking of the story mode, it takes about 6 hours to complete it, which ends up leaving a feeling of emptiness after there is no new game plus, although it’s possible to revisit the stages already completed to acquire extra fruits types, meet new enemies, explore places not yet visited using Pikmin previously undiscovered and the like.

As Pikmin 3 was actually created for the Nintendo Wii U, little is seen in terms of change compared to the original game of 2013. The visuals are a little bit sharper because of the improved resolution, but nothing was justifiable for charging a full price in the version brought to the Switch in 2020. I believe that if online multiplayer mode were included, many owners of Pikmin 3 for Wii U would feel fully convinced to migrate to a newer platform to have an experience that does not depend on people being together in the same room.

It is a pity that Nintendo did not have the kind of tact necessary to understand the needs of consumers, in addition to adding features that would encourage its players to purchase the same product again on a new console. It left me in doubt again regarding the ambiguous description already mentioned before, and I now have the impression that Mario 3D World will also come without online multiplayer as they made it seem in the last Nintendo Direct of 35th Mario’s Anniversary.

Other than that, motion controls have been added to assist the player in targeting, which can also be used in an automated way at various times. Still, it’s not a perfect solution for any newcomer. When I played with my wife, she had a hard time hitting the spot where she wanted to launch the Pikmin, and I confess that I also often spent moments of anger with the controls a little complicated in terms of aiming – even though I was quite insistent with controls being bad.

Despite some accessibility issues and extra content with little appeal, Pikmin 3 Deluxe is incredibly fun and unique in its proposal. The third game in the series made me want to know the previous ones, which I believe could come to the Switch later through a collection or even the Nintendo Switch Online service. Its gameplay is addictive, even with slightly weird aiming mechanics at first glance. You get used to it, but you feel that you are never 100% satisfied with what was presented. Even so, Pikmin 3 Deluxe is a very suitable product for fans of real-time strategy – even more so with the possibility of co-op -, but with a crazy gameplay that only Nintendo could have done. Finally, I’m again saddened by the absence of an online multiplayer.

Pikmin 3 Deluxe is a very suitable product for fans of real-time strategy – even more so with the possibility of co-op -, but with a crazy gameplay that only Nintendo could have done.