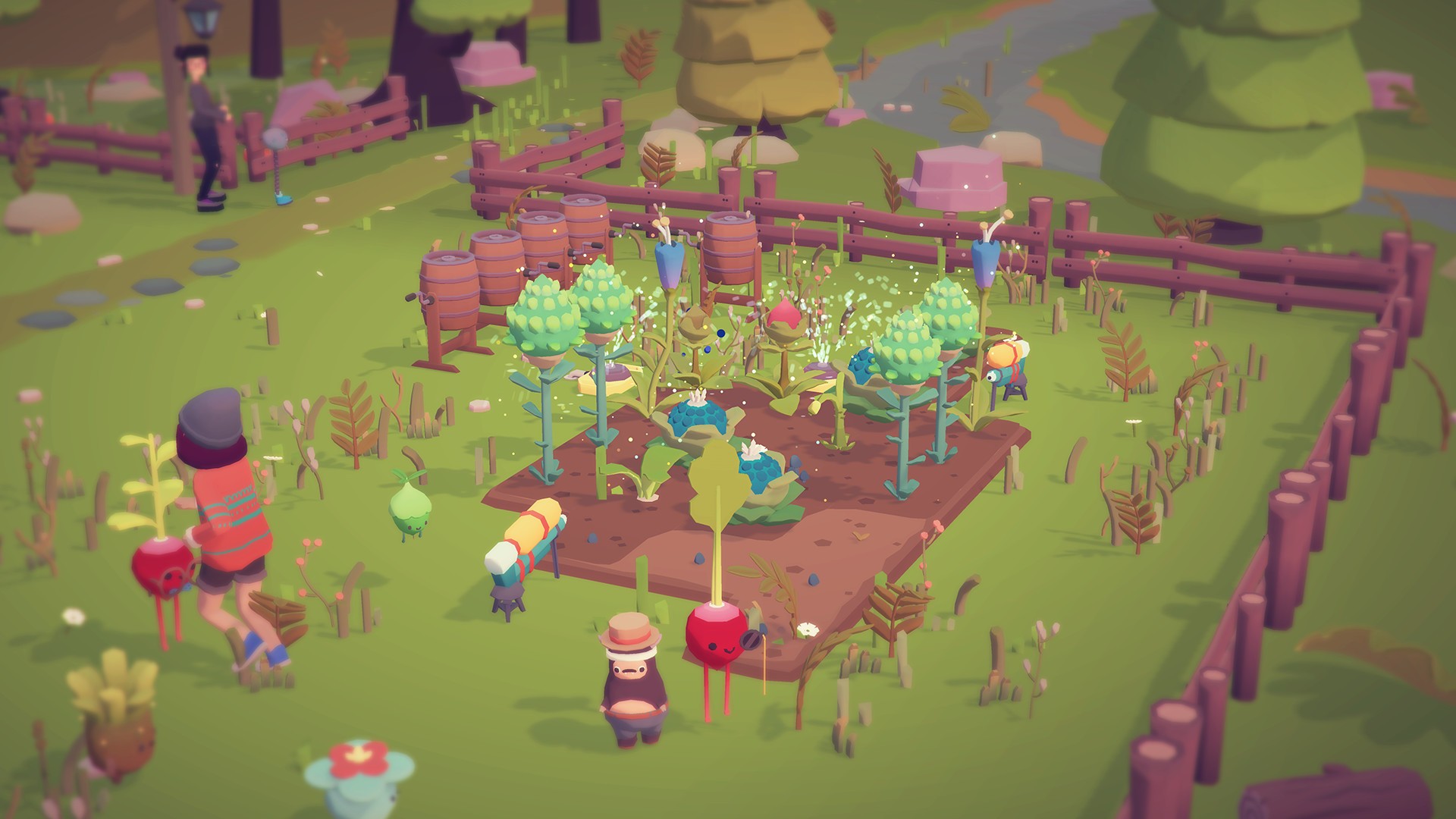 Life simulation games have been attracting gamers for decades. My first experience was the farming simulator Harvest Moon. There was something heartwarming about bringing a ruined farm back to life. You have to balance your own needs with that of the local villagers. It’s like a do gooders neighbourhood watch. The games have evolved as players’ tastes have developed. The genre is now flooded with titles, the latest AAA is Animal Crossing. What do you think would happen if Animal Crossing, Harvest Moon and Pokemon had a ménage à trois? The resulting baby would be Glumberland’s game Ooblets.

Ooblets is a sickly and charming game all about friendship, farming, and exploring. You start your adventure heading towards an island just off the Oob mainland. You leave your home as you crave a new start and excitement. You arrive and notice that everyone is friendly, and there is Ootblet’s running amuck. The Mayor welcomes you, and explains that you can have an old run-down farmhouse, if you will help her out. Now, where have I heard this before *Cough* Harvest Moon *Cough Cough*. In all fairness to the developers, its a tried and tested method, so they’d have been foolish not to use it. The Mayor is shocked that you do not have an Ooblet of your own. After a small tutorial, you meet the local club owners, go through the list, and select the one you fancy. I chose a Mushroom called Shrumbo, for no particular reason, and I’m not sure it matters either.

Now you will get the game underway. You will be given tasks to complete; repair your house, build relationships, and farm crops. Sound familiar, *Cough* Harvest Moon and Animal Crossing *Cough Cough*. The leading games in the genre do it, why wouldn’t you take inspiration from them. And from what I experienced, the developers have done a very good job of balancing the difficulty. Now, you may think “I’ve played the aimless life simulation genre to death! I want something to aim towards.” Ooblets has got that covered. This isn’t just about building a new life for yourself, but it’s also about exploration. Even in a cutesy world of growing living creatures, and dance-offs (more about that later). You must also reconnect the Oobnet. The people of the island have been without their internet for too long. The Mayor has had enough. Armed with your trusty followers you must connect all the towers to restore it.

So now we know what the game is about, let’s get into what you can expect from the game mechanics. First, this is still in Game Preview, so there were several glitches, and issues that need sorting out. Some elements I have seen may be altered or removed at full release. The title comprises many cogs working together to create this whimsical experience. You have the main character, and their followers the Ooblets. Building, decorating, and farming. Tasks and friendships. And finally you have exploring, dance-offs, and collecting of resources. Each of these elements is intertwined, and though you can ignore some of them, it’s best to keep on top of them all. 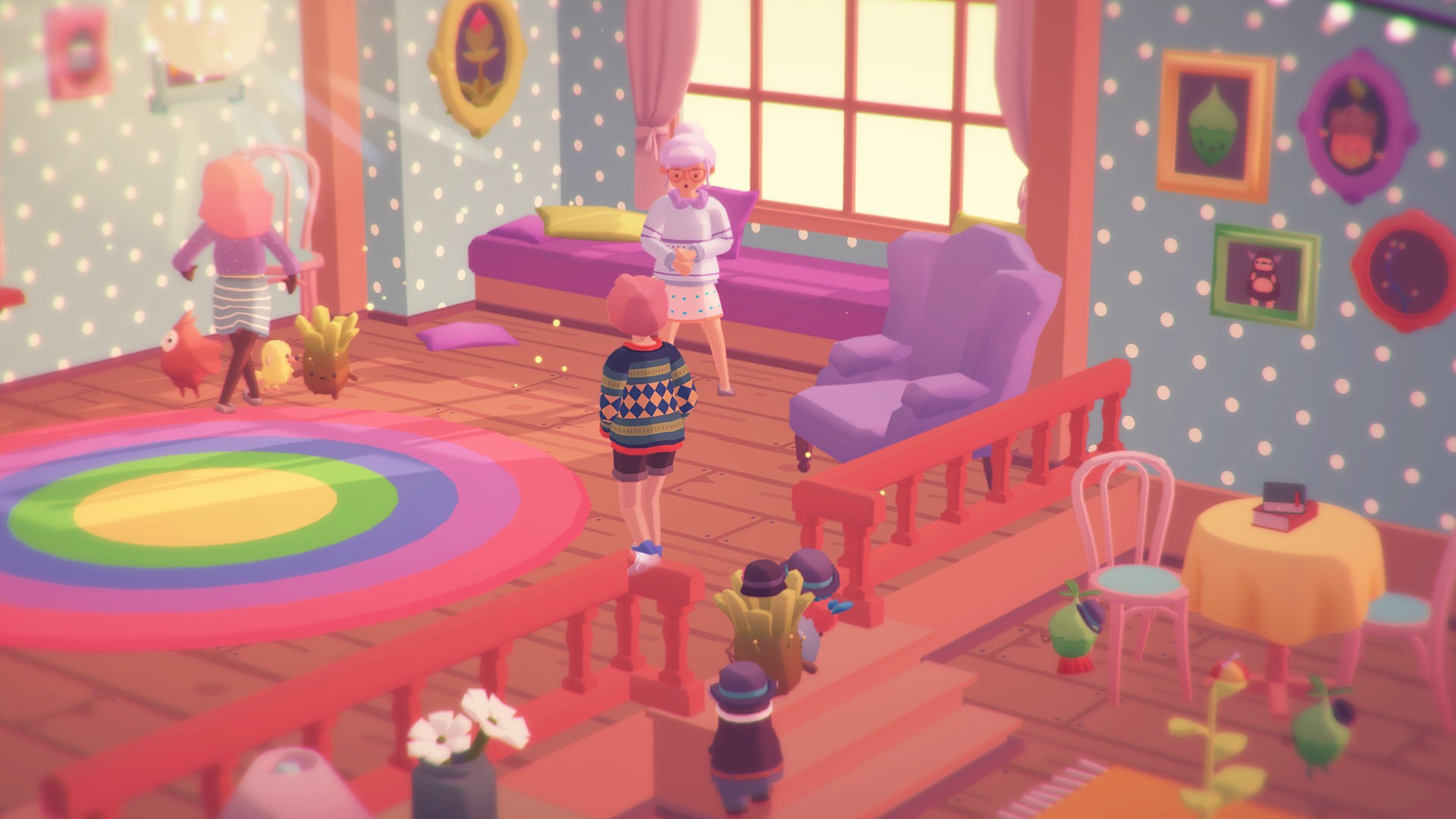 You, and the Ooblets gain experience from completing tasks. The Ooblets go up levels after successfully battling with other wild Ooblets. This isn’t your traditional RPG or turn-based simulation combat. Oh no, this is a dance-off. How very 80s of the developers. You line up your team of followers, and must use your turn to select the cards to gain points, hype, steal or freeze the enemy. A card-based dance-off sounds strange, right? Well, it was brilliant! Strategy and luck are required for victory, though, I didn’t come across a battle I couldn’t win. Once you wipe the dance floor with your opponents, you gain XP and a seed to plant your very own Ooblet. This premise was simple, fun, and funky. Gaining levels for your character took effort, and lots of grinding. XP is allocated at the end of the day. How many badges you’ve earned, items you’ve collected, the tasks you’ve completed, and so on. As you level up you don’t gain HP, or stamina, no, you gain access to locked items. You can get more blueprints to decorate your house, or more in-depth quests. This then increases your rewards, allowing you to buy bigger and better items.

Farming and clearing your land is a big part of this title. Buying crops with limited resources, then selling them for a small profit, only to have to do it all over again. This may seem a little mundane and repetitive, and I’m sure it would be, if you had to do it all yourself. You can buy sprinkler systems and water guns that keep your crops wet. Ooblets are split into two groups; ‘Followerbabies’ and ‘homebabies’. The ‘homebabies’ can be used to de-weed the land, pull crops, and keep everything in good working order. The only issue is that all the support tools cost a lot of resources, and resources can be scarce. So it’s a juggling act of what to spend your time on. Like with all these styles of games you find that comfortable place, it just takes time and effort.

The tasks were all a little samey. Collect this item, place it here, repair this building, and so on. Though they added a layer of interest to the gameplay, there wasn’t enough variety for my liking. I would have liked to see more missions that involved travelling to different areas. The cooking and crafting mechanic could have been used more. This would have enhanced the difficulty and made you plan your approach in more detail. This is an area that I’d like the developers to look at before release. The easy open tasks are good to get players set, but then it should be a lot tougher with much bigger rewards. Completing any of the jobs, rewards a mixture of the main consumables in the game; ‘Wishies and Gummies’. ‘Wishies’ are used to unlock blueprints and recipes, which can then be purchased in town. ‘Gummies’ are the main currency, and you never have enough of it. Upgrading items, buying seeds, completing certain tasks all cost ‘Gummies’. It’s a battle that gets frustrating, especially when you are juggling several jobs.

Ooblets is a charming and fun affair. It has a bright and vivid presentation with a cartoon art style. The islands that you visit each have their own unique style and environment. I loved the cutesy approach from Glumberland it formed the backbone of all the action. The character models were bold and matched their personalities. My favourite part was the dance-offs. The area would change from lush forest to a bright and garish arena. The two teams lined up while surrounded by a crowd of raucous Ooblets. It was loud, bold, and oh so wonderfully 80s. 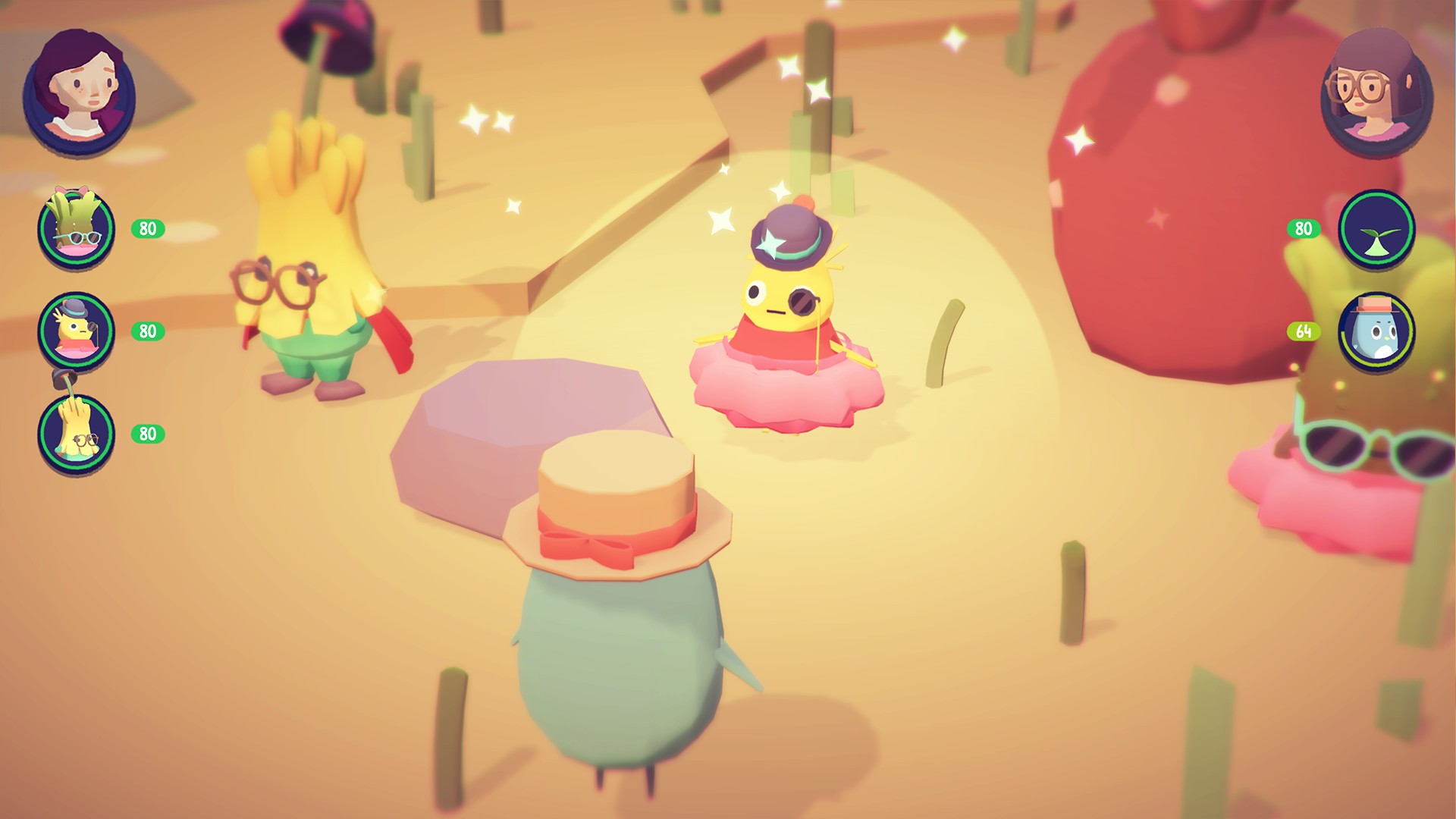 Audio is one of those elements that is usually overlooked by developers. I’m always impressed when an original score or unusual sound effects are used. Ooblets had me tapping my feet, and chuckling, its hearty beats and over the top dance-off music set the scene. The ambient music kept the atmosphere jovial, lighthearted, and was never a distraction. If you have ever played The Sims, frankly, who hasn’t? You will be familiar with the gibberish noises used to replace any of the dialogue. All emotion is delivered using tone and pitch. It was great and added to the whimsical nature of the theme. If I was to put everything else aside, the audio and visual elements were fantastic. As you’d expect, it was a little rough around the edges. Some animations were off, and the audio didn’t always match the action. With the developers asking for issues to be reported, these will be resolved ASAP.

With so many elements mixing, you may think the control system will be a nightmare. Concerns that there will be several radial menu’s and an untidy User Interface. I can put your mind at ease. The controls are straightforward. But the UI is busy. Mission requirements are placed in one corner, the time of day in another. Your inventory also gets pride of place. It should be simplified by removing the mission info. My main gripe with the controls revolves around the energy and food mechanism. You place food items in your shortcut bar, yet you cannot use it unless you go into the main menu. It’s a minor thing, but so very annoying. It made the gameplay stop, start, and needs to be rectified.

The life simulation genre has the biggest replay value by far. It has a way of getting under your skin and makes you want to return for more. If you have an addictive personality, you may find that you lose yourself to the world of Ooblets. Daily jobs, plenty of farming, a house to decorate, and friendships to nurture. You have plenty to explore, and oh so many dance-offs on the way. In the current build there are no achievements, but I imagine it will be fun and time consuming getting them all. I’ve invested around 10 hours so far, but I know I will lose many more hours before I’m finished.

I worry when picking up Early Access titles. Will it be unplayable, and a bug ridden mess? This small development team should be proud of what they have achieved. A fun, unusual and vivid world awaits you. You will lose yourself while trying to make a new life on this little island that you now call home. Lovers of Harvest Moon, Animal Crossing and Pokemon should pick up a copy of this. It has its issues, yet these fade into insignificance when balanced with the positives. Do I recommend that you try this? Yes! You get an awful lot of game for your money, and though there is a lot going on, you can play this casually. It’s time to grow your own Ooblet, go on an adventure and dance your heart out.

A colourful adventure awaits you in this new world that you now call home. Grow your Ooblet, claim your farm and help the villagers to make some new friends.