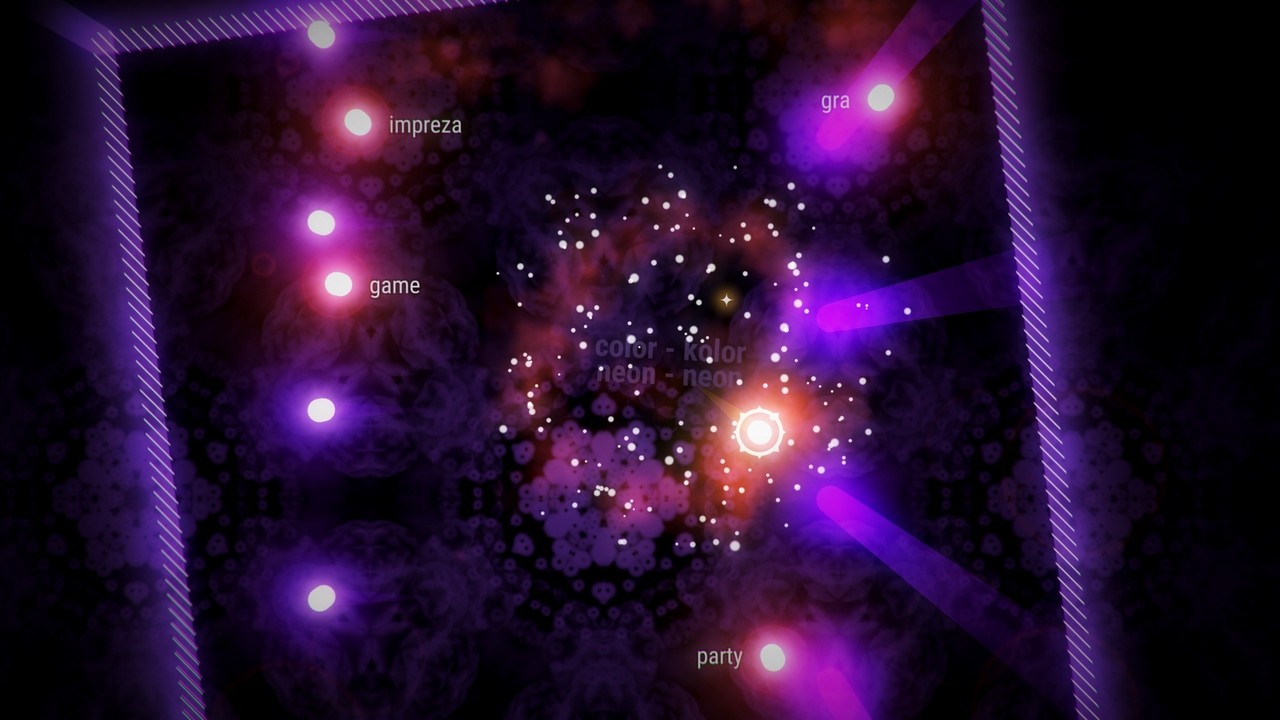 Did you know that there are approximately six thousand different languages spoken in the world today? I didn’t, although I did know that Mandarin Chinese is the most popular. It’s no wonder then, that learning new languages is never an easy prospect. However, if you’re looking to learn a range of languages including English, Polish, French, Spanish or even Chinese, then help may be at hand; especially if you love electronic dance music and arcade games as well. That’s because, thanks to Mythic Owl and Baltoro Games, you can learn new languages, listen to electronic trance music and play a shmup-like arcade game, all at the same time, with their new title, Trancelation as it beats a release onto the Nintendo Switch.

The way in which this title works, is by presenting a range of different languages; both in the languages you currently speak and those that you want to learn. These languages range from English to Polski, Espanol to francais and Deutsch and Chinese to Russian. Once you have instructed the languages you know and those you want to learn, you are then presented with the main screen which holds a wide range of game styles and activities with which to play. From here, you can select a list of vocabulary subjects that covers activities, adjectives, animals, food and drink, as well as more diverse ranges that cover numbers, IPA’s, the periodic table and even morse code.

Once your language and subject choices have been input, you then embark on a tutorial that offers a brief description of how the game plays. When this has been completed, you are then free to take a series of challenge modes that unlock through progression. These range from games that involve questions and answers, questions and letters and pairing groups. This is achieved through playing the core game within a variety of styles. For instance, with your languages set as English to French and your game set to questions and answers, the game presents a word or phrase in English which needs to be selected with an on-screen cursor. Once picked, the game then presents a choice of four French words or phrases that corresponds to the English word and using your cursor again, must select the correct translation. 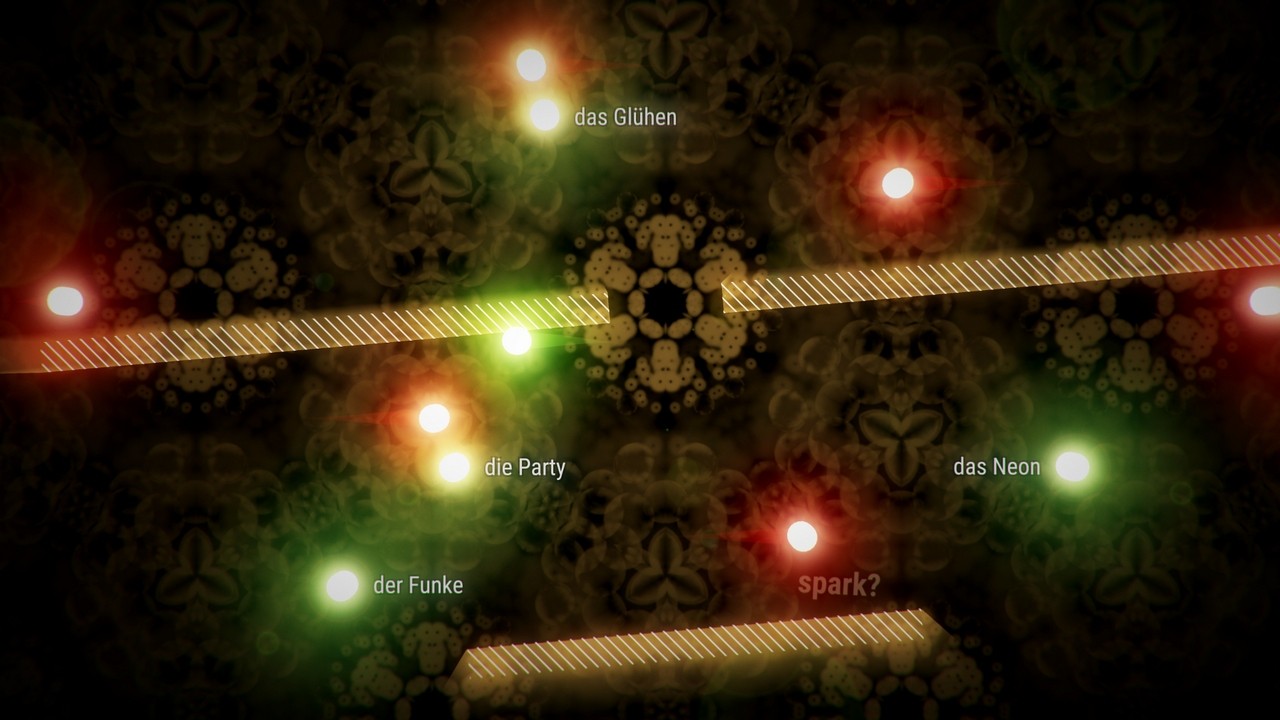 The main premise of the game involves guiding a neon-soaked cursor around a background of fractals, as you select phrases, meanings, letters and numbers and pick their corresponding translation. This is all fully complemented with a thumping soundtrack of trance techno. As you progress through the levels, you score multipliers for correct combo’s and picking up stars that are scattered by picking the correct answers. Should you pick the wrong phrase though, then the question resets and you lose a life heart; use up all of your hearts and it’s game over for that particular level. However, as you progress further into each level and amass scores and multipliers, the game introduces further hazards that fly around the screen in a hail of bullet-hell neons; similar to the mechanics of playing a shmup.

In order to advance within the game, each level also comes with a series of objectives, such as maintain a multiplier, string together a number of correct answers or achieve a specific score. By fulfilling these objectives, you are awarded stars which unlocks further levels and soundtracks. As you begin to unlock more levels, their play styles change with a variety of extra additions. These can range from rotating walls and barriers to warp points and black holes; something that brings more tension to selecting answers and bullet dodging. To help with your quest though, you can boost your cursor around the screen; collect hearts that appear randomly and shields to offer protection. Boosting also offers a good dodging mechanic, as you find yourself boosting to the bass beats of the level’s soundtracks. 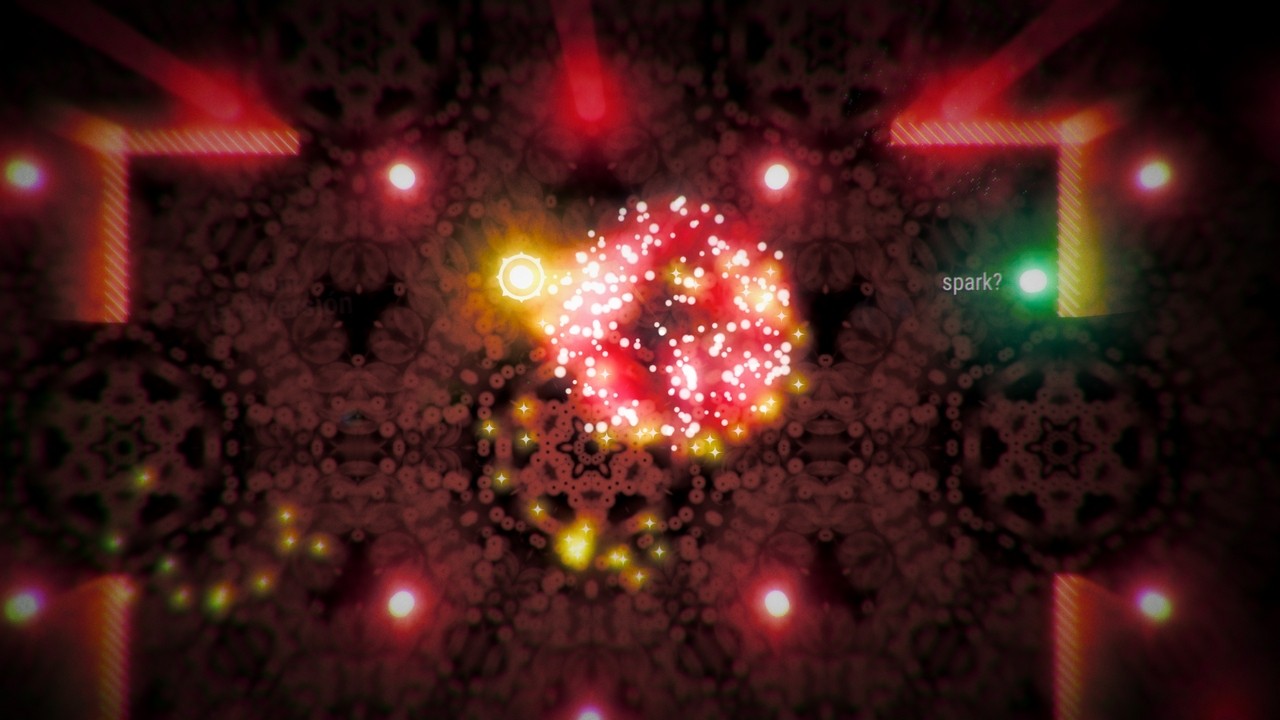 There are a variety of difficulty levels on which to play, although the game’s challenge can also be adjusted by selecting languages that aren’t familiar to you, as well as the subject matters. If you’re familiar with English and French, then you’ll have an easier time within each level. However, if you choose Chinese and Russian and don’t know these particular languages, then you’ll have a seemingly impossible task on your hands. The same can also be applied to subject materials, as playing with numbers was significantly easier than playing with morse code. This represents a wealth of options in how you can play the game and offers a near infinite form of longevity. Should you wish to simply play without the challenge of matching languages and phrases though, then the game also offers an arcade mode that simply involves selecting cursors and dodging bullets, whilst revelling in the toe-tapping beats of the soundtrack.

In terms of gameplay, its basic premise offers a sublimely easy game to get into to, yet is also one that is fiendishly difficult to master. It’s educational, it’s fun and it’s a head-bopping blast. If I had one real criticism with the game though, then it would be the omission of any online leaderboards. If the game had included these into each of the levels and play styles, then this would have been an arcade game from the realms of heaven; offering a real form of longevity and a competitive edge to the gameplay. Admittedly though, even without these, the game is still a lot of fun to play.

Overall, Trancelation presents a quirky and different style of gaming that can educate, as well as being a fun title to play. Its element of learning new phrases and words within a foreign language is a clever implementation; although I’m yet to be convinced that it truly works. I guess that only time will tell. However, despite that, this is still a blast to play, especially with its neon-soaked lighting, fractal backgrounds, level variations and thumping soundtrack throughout. As an added bonus, if you buy this game during its opening release weekend (13th until 16th March 2020), then you’ll also be able to download four other titles for free from Nintendo’s eShop: Freecell Solitaire DX, Pizza Bar Tycoon, 2048 Battles and Flowlines VS. For that offer alone, this is a game that’s well worth downloading, but even you miss this offer or the other games don’t appeal, this is still an arcade blast that’s well worth investing your time and money into; after all, you may learn a whole new language, but if not, then at least, like me, you’ll get a shiny new high score! And that’s Trés Bon indeed!

Trancelation presents a quirky and different style of gaming that can educate, as well as being a fun title to play.