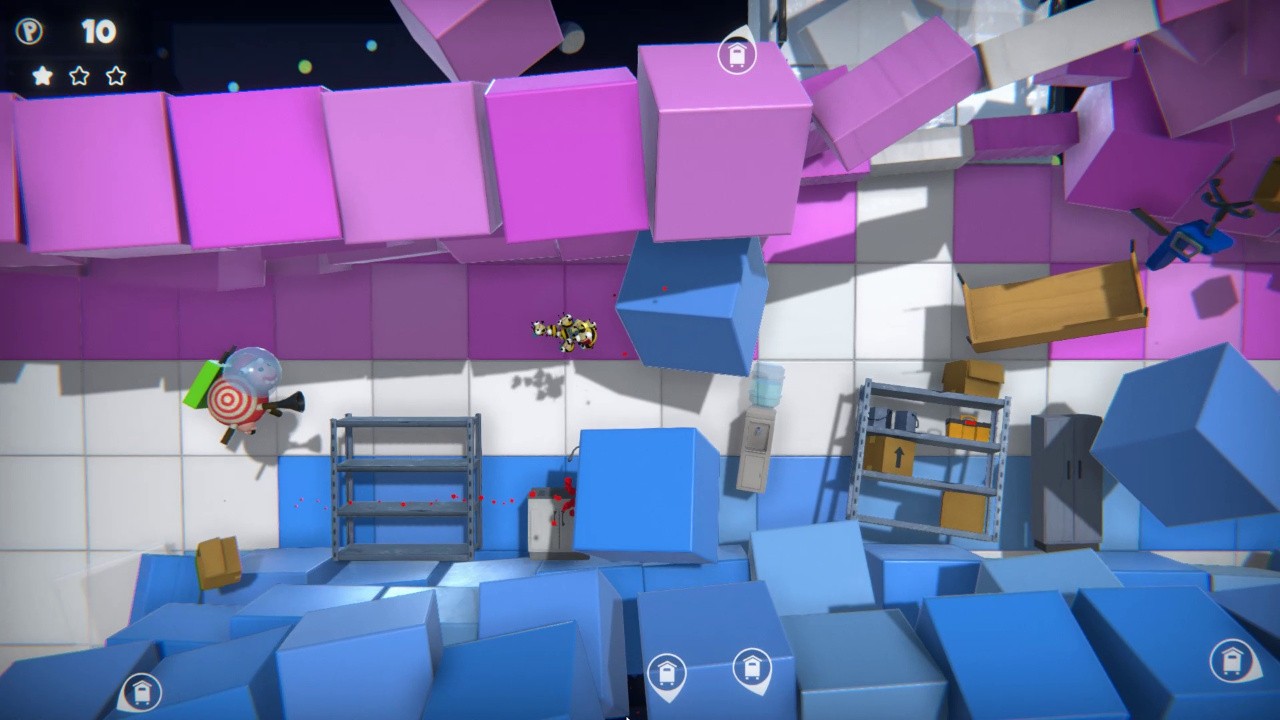 We all love to think we are brilliant at any game that we pick up. I came to the conclusion a long time ago that for me, this wasn’t the case. I know my limitations, and that’s why you won’t see me playing too many online competitive titles. Even though I have accepted my fate, this doesn’t take away the fact that I like to think I can be the best at something, and I love a good challenge. In my latest review game, my competitive streak was pushed to its limits, as I could see how my efforts compared with the global community. Mostly I did all right, though I think the amount of people playing it at this moment isn’t vast, so I expect my results to plummet faster than a stone through water. Bug Academy has been developed by Igrek Games and published by Ultimate Games. You take control of a vast array of different insects and bugs, and you must complete each of the lessons to graduate from Bug Academy.

This fast-paced arcade title combines several mini games, where you must; build towers, throw cows, complete mazes, put out fires, and so on. Each of the stages has a target of 3 stars, and this is achieved by finishing in a certain time, or scoring a set amount of points. It’s all high pressured and crazy fun. You will rue your luck repeatedly as you try, yet cannot gain that elusive maximum score. This can only be played as a single player game, but don’t let this stop you putting it on if you have friends around. Some of the funniest moments were when my wife and friends failed. I could see the frustration building, and the air turned blue with some choice language. It was all said in jest, after all, no one wants to be the loser of the group.

Each of the stages begins with you controlling a singular bug. You may be presented with the chance of making a swarm at the start of the level, or you might need to explore to awaken the other sleeping creatures. “Why do you want a swarm of creatures?” You ask. Simply put, the more bodies that you have, the heavier the item that you can lift, and the faster that you can move. In a game where time is of the essence, making a massive band of bugs is a big deal. Most of the mini games are short lived, around 3 minutes on average, so failing one isn’t the end of the world. Quickly hitting reset, and learning from your mistakes makes progressing easy, and you will hit the high scores in no time at all. 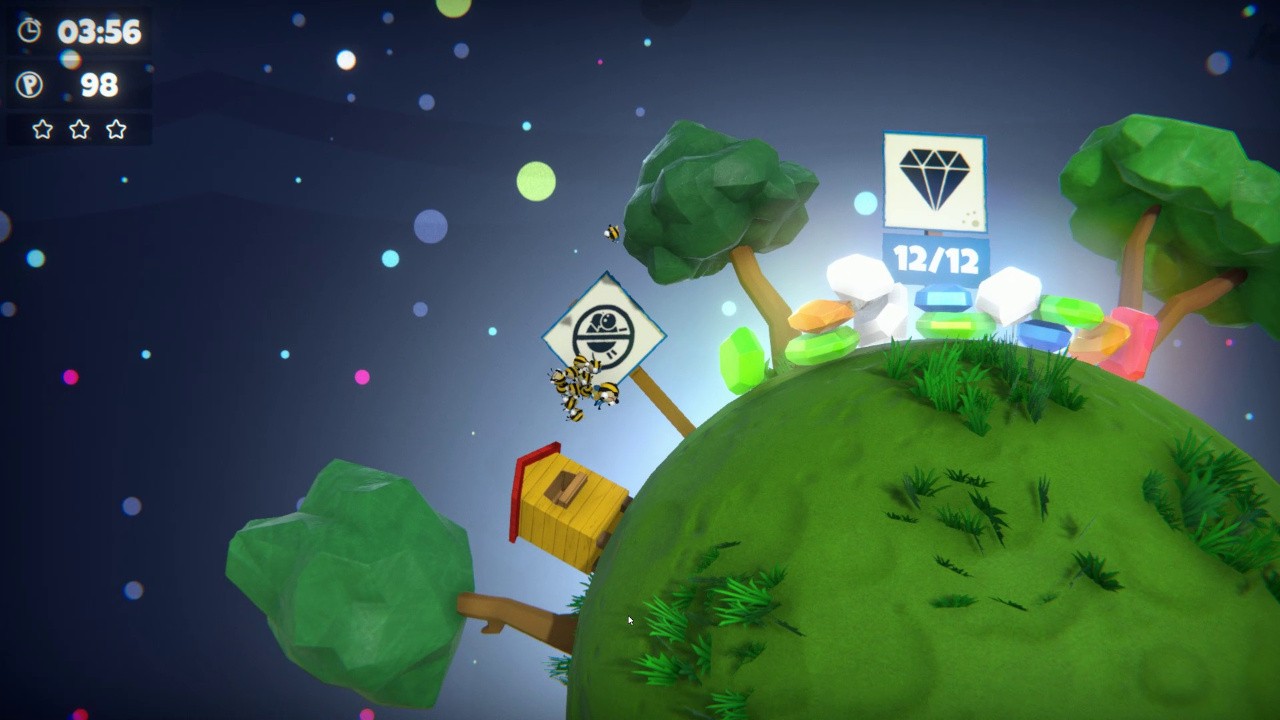 Each of the worlds has a set number of levels, if you wish to proceed, you must achieve a minimum number of stars. Once you have enough, you are free to move on, where you will begin your journey again, this time with a new animal. What the developers did well with this concept was to add a twist to each area based on specifics of the animal you were controlling. An example of this is the fireflies in the second world. You are asked to work your way through a darkened maze using nothing but the fireflies light to guide the way. The nature of each stage doesn’t change too much, and there are signs of repetition which some gamers may not like. For me, it was a good way to keep the action fresh, without having to learn too many new gameplay mechanics. It meant that I could spend my time enjoying myself rather than waste time learning how to beat each level.

For a small indie title, I was blown away with how good the graphics were. The art style is crisp, bright, and contains cartoon elements. It was great to look at, and the variation in each of the different worlds, and amongst the creatures you control, makes this one stand out from its peers. With the action moving so quickly, I was worried that there would be glitches, or the imagery would be blurry, and wouldn’t be able to keep up. I’m happy to report that this wasn’t the case. No matter how hectic the game got, it always looked fantastic.

Now, I’ve mentioned the dreaded word repetitive already. And I’m going to have to say it again for the audio. There isn’t a great deal of variation in the music that accompanies the action. The fun and upbeat tracks play repeatedly through every stage. It was repetitive, but I didn’t mind it. I caught myself on several occasions nodding my head to the beat and subconsciously enjoying every moment. Though it’s not out of this world good, it worked well with this title as its whacky nature matched the crazy theme. The sound effects on the other hand were great. The thwack of cows hitting buildings, the splosh of water flying from your mosquito, and the general buzz of the insects you controlled was brilliant to listen to. The developers have taken a simple approach with the audio, and the gamble has definitely paid off for them. 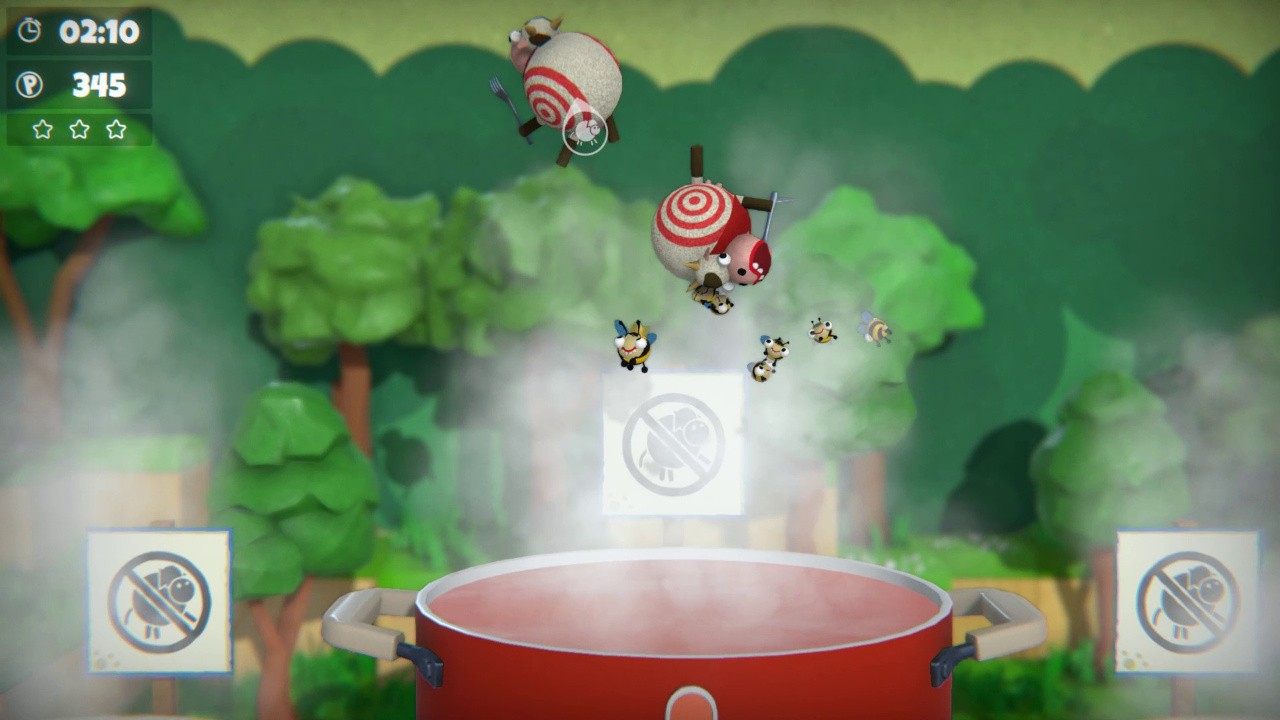 I had a love hate relationship with the controls, more importantly the sensitivity of them. If you weren’t careful, your bugs would fly around the place like they had consumed Speed. They were all off their rockers, and almost impossible to control. I have lost count of the number of stages I failed because of hitting walls, or dropping precious cargo en route to the final zone. Learning to control your creatures is a fine art, and one that takes practise and patience. If you are planning on trying this game, just be aware that this could be a problem for you, and spend some time learning how much you need to move the analogue stick. Other than this problem, Bug Academy is easy to play, and its buttons are well mapped out for use with a controller.

If I play a game in this genre, I have an expectation that it will have plenty of replay value. Fortunately, Igrek Games didn’t let me down. I sat and played a tower building level for 2.5 hours straight, my eyes were streaming, and my arms hurting. This is how much energy I put into trying to be the best at one particular level. You too will lose yourself to this one, especially if you are competitive. The global Leaderboard drives you to try just one more time, and that then turns into 10 times, and then 100. There is also a tough achievement list to work your way through. If you are a gamer who likes to hit 100%, then this isn’t one for the feint of heart. Completion will take practise, patience, and a whole lot of luck.

Bug Academy was a small indie title that could have easily slipped me by. Though it has received positive reviews, and feedback across the board, there doesn’t appear to be a massive following for it, which is a shame. This is one of those rare games that is simple in concept and design, but fantastic to play, tough to beat, and frustrating as hell. With all the elements working so well together, I can’t help but recommend that you give this a go. You will lose hours of your life to its maddening trials, and you will have to learn to stem your foul language, otherwise you may just get a reputation for having a “potty mouth”. I think you’ll be insane not to try this fast-paced arcade title! Build up your swarm of bugs, after all, even insects need to graduate from Bug Academy.

A fast-paced arcade game that is fun, frustrating, and infuriatingly good. Gather the stars, and head towards the final exam. Graduation is all but guaranteed.