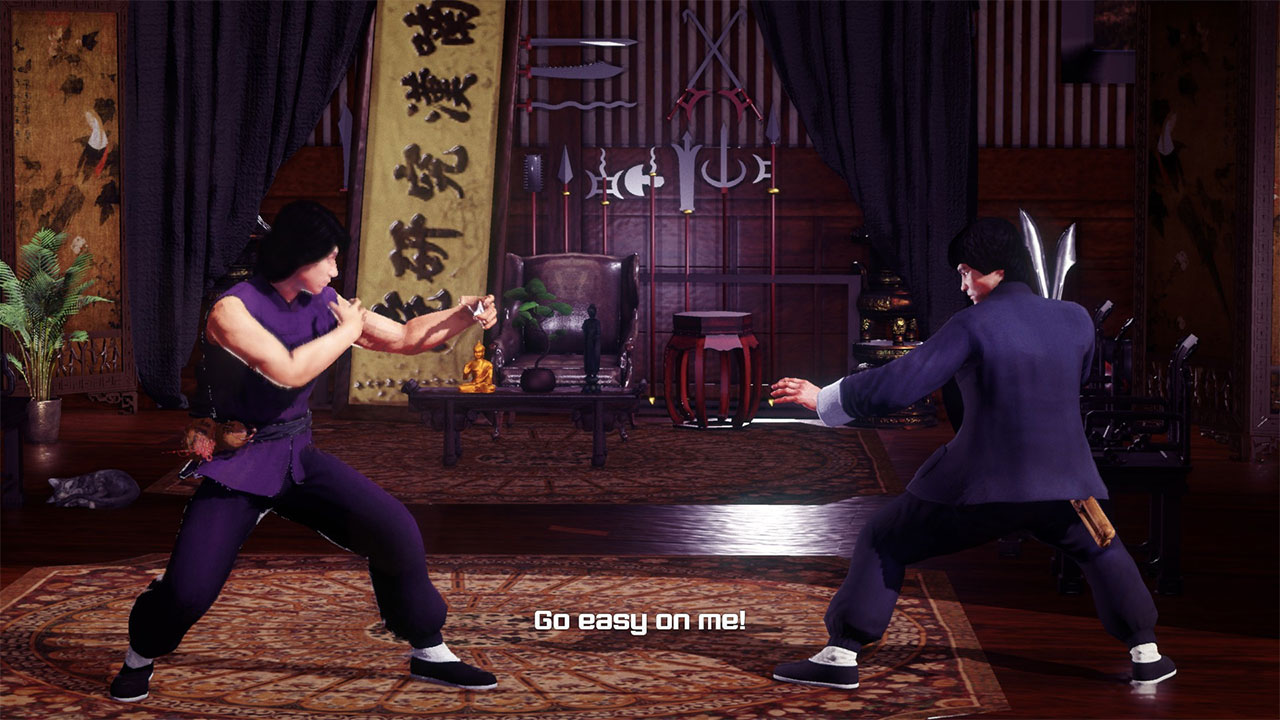 The era of the dubbed martial arts film is one that is completely lost to the current generation. I’m not saying that they wouldn’t get or wouldn’t enjoy it: I’m saying that the fantastic yet awful style of the times is long gone. Nowadays, the great movies that star Donnie Yen, Tony Jaa or Jon Valera (stunt men need recognition) are available in a variety of languages, both the original or the correctly translated, properly handled dubs that match the story and the characters. Back in the days of VHS tapes, you just had to assume the random English shoutings of revenge and violence that were absurdly out-of-sync with the actors’ mouths was remotely correct and not just the cocaine-fuelled ideas of what producers thought the plot would be. Still, there are many a people, young and old, who loved those movies that came out of Asia, inspired so many people to investigate martial arts in the West, and still create great films that cross hemispheres today.

Shaolin vs Wutang, from Jae Lee and published by Godspeed Games, is born out of a pure, unadulterated love for the fighting movies of the 70s and 80s. In a time where the plot was secondary to fighting and stunts, this game seeks to boil down all the essence that made those movies legendary camp and bring it to the forefront for players to beat each other, or just survive an onslaught of madness. Each character has no name, but, instead, is the embodiment of 27 actual types of martial arts. From Kung Fu to Ninjutsu, from Snake Fist to Armor of God (which is a real, Christian-based martial arts), each character comes with a weapon, a set of combos based on real martial arts, and a backstory that is usually only a single line (teacher killed by invading forces, hometown ransacked by evil empire) but is enough to justify them fighting everyone in the world. You need to really experiment and see what works best for you, similar to every fighting game, but more so because this game is hard as hell to figure out.

You need to quickly discard any notions you might have about powerful fireballs or crazy windmill kicks when it comes to Shaolin vs Wutang. The purpose here is to have actual character models, done up in decent computer graphic rendering, beat the hell out of each other with very real weapons and very real fighting combos. There’s an upside and a downside to this whole thing. The upside is that you can really feel good about both getting beaten and beating your fellow players when the fight goes well. There’s no amount of button mashing that translates to the action in this game: you’ll just throw hands in the air and then stand there like a fool while they deliver a spinning jump kick to your face, or throw you over their knee and drive both elbows into your abdomen. Take a moment and view the “moves” option from the pause menu to get the general idea of how the actions work, and you’ll have a significantly better time without flailing. Players who are patient and can approach the fights from a good perspective will ultimately have the upper hand, especially when you figure out incorporating the directional buttons with the attacks to change moves, or to move into combos that can paralyse the opponent for up to six hits. 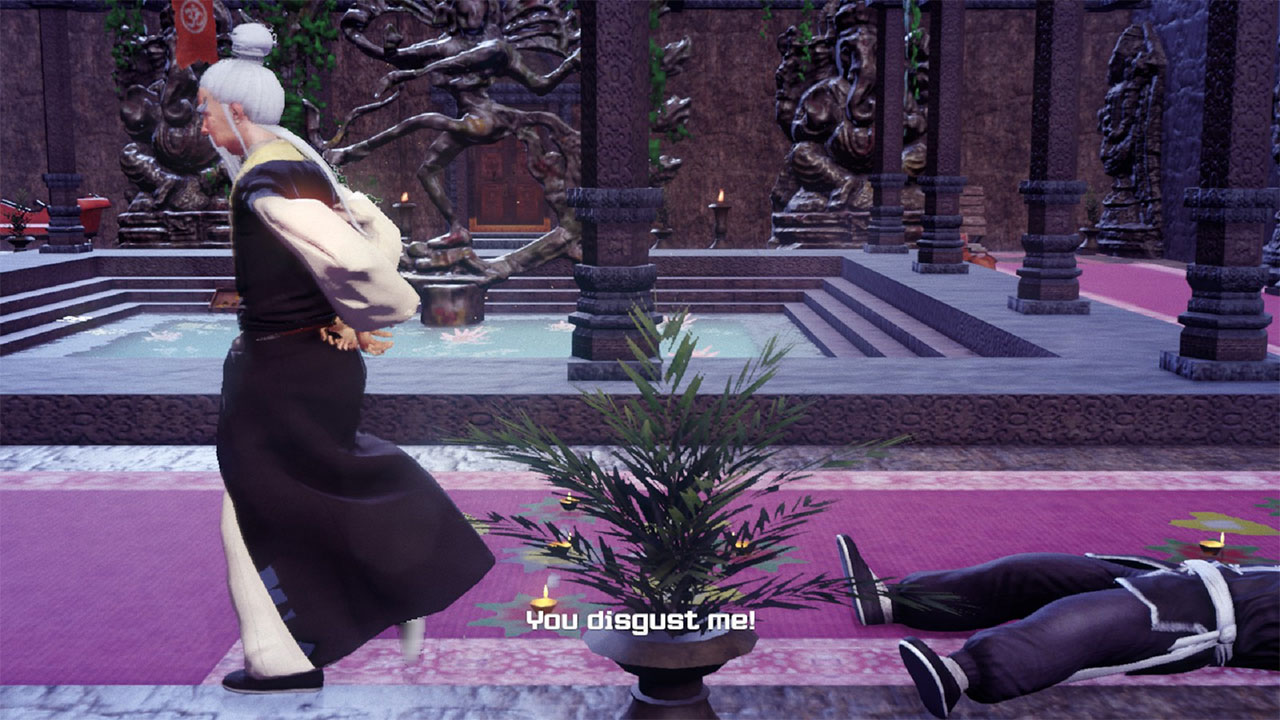 The downside is that the computer knows this right away, and you will be hurt badly for this transgression against nothing. Even on the easiest difficulty setting, Shaolin vs Wutang isn’t sending their throwaway foot soldiers to deal with your interloping ass. When someone recognizes your 8 Diagram Fist technique, they will adjust, and they will pound you into bloody hamburger. This sort of fighting game is one of those that will be best played against other people because there’s nothing fun about watching yourself get brutalized by a hyper intelligent user of USA Karate. Now, setting up two computer players on the highest difficulty to whack the hell out of each other, now that’s good old fashioned fun. Just keep in mind the CPU curve and be ready for it: you don’t want to waste a lot of time on normal getting beat up in the temples of White Beard when you could be merrily stabbing into people with your hook swords. Or, if you’re determined to be a badass with higher difficulty, at least take some time in the Training area first: the more sweat you have in training, the less blood on the battlefield.

Straight up, this is one of those titles who knows their audience and makes the game for their audience. Shaolin vs Wutang really wants to hook in the fans of the martial arts movies, and that’s who this is made for. The visual direction and soundscape are the clearest indicators, and the delivery is, well, it’s alright. Sound wise, everything is spot on. The announcer voice at the very beginning has the proper, minor distortion that makes it feel like it’s playing out a CRT television in my friend’s basement on a Saturday night. The music all is actually taken, legally, from classic kung fu movies, giving you the real feel of getting ready to beat up someone in flickering candlelight before a massive Buddha statue. There’s the right number of tinny horns, tense string notes and the occasional gong that really sells the magic, and I gotta give it up for Jae Lee: they positively killed it on this front. Couldn’t have asked for better. 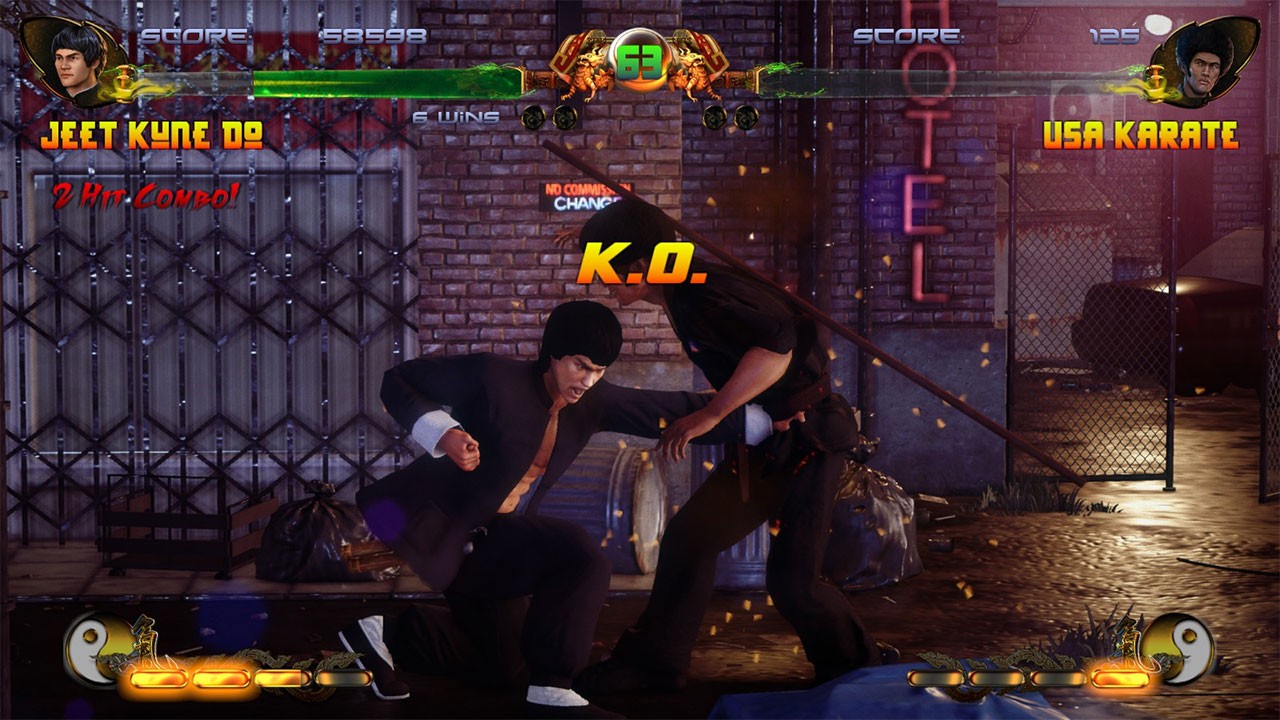 Visually, I feel, is a different story. Don’t get me wrong, the way the character models look is fantastic, capturing the style and movements of so many archetypes of the martial arts film era. Long while beards, grim faces, cut muscles, well designed gis and more. I do think they needed more than just two female characters: with 27 different styles, you’d think women would have learned beyond Crane Fist and Lotus Palm. Still, they look and perform well, so that’s not really an issue. No, my problem is with how clean everything is. I’ve played at least thirty games now that have filter options to slap onto a game and make it look like it has scan lines, is in sepia, convert to a 4:3 ratio, etc. Yet this game has only one visual state: clean and crisp as the day it came out of the presses. Why is there no option to make it look even just a tad grainy? That would have totally sold the magic, and also would have allowed me to overlook the suspiciously long load times. Starting up the game is almost a full minute wait, and you’ve got quite a few seconds to run and grab a snack when switching opponents in the arcade mode.

However, as such, Shaolin vs Wutang does deliver in a big way for potential fans. It’s incredibly easy to figure out compared to other fighting games, so you can probably get your uncle or father or aunt or whoever to join in on the fun without needing a lot of background in fighting games. The sound effects and music are spectacular, and it’s just good fun, straight up capturing the magic of the golden age of fighting movies. While I doubt we’ll see this title at EVO next year, I think it could be great to hook your Switch up to a projector and screen this on the side of a building, watching two massive beings prove, once and for all, that Jeet Kune Do is better than Longfist.

You have dishonored your master, and my father, and our dojo! We settle this now, by payments of blood!