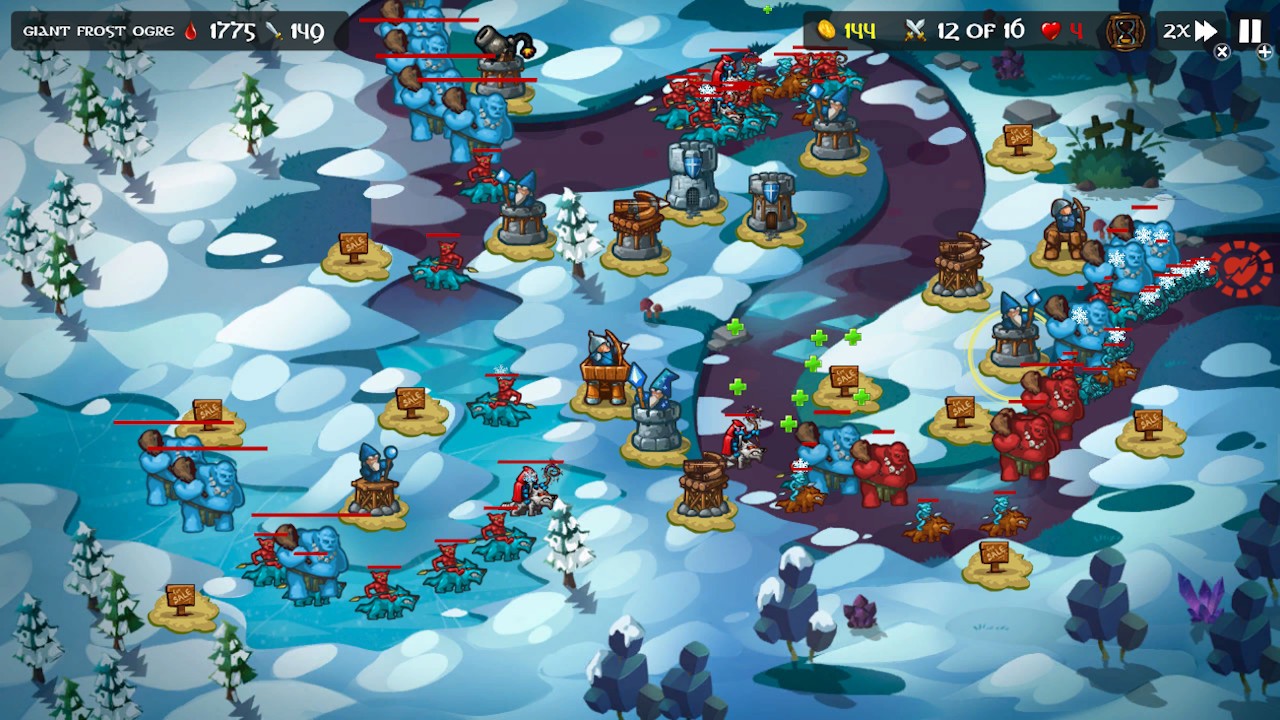 This could begin with a line that tower defence games have come a long way since being catapulted onto mobiles, but in fairness, they’re mostly the same. The only real standouts will be the types of buildings, units, introducing hero units and possibly something like a unique story or a series of challenges. As a fan of the genre, I know what to expect, or what not to expect, so I went into Fantasy Tower Defense with an open mind.

Looking at the visuals, you’ll see a standard setup of predetermined locations to place your buildings, with an art style pretty typical of the genre and set in a medieval setting. The graphics are of a cartoon-like style and passable, but tower defence titles aren’t supposed to wow you with the presentation. Instead, the infectious gameplay. Unfortunately, Fantasy Tower Defense lacks it.

The game immediately throws you into a menu that has the option of… ‘start’. Pressing the A button allows you to choose your level from a relatively linear line up that scrolls to the right as you unlock each one. On-screen are two icons that indicate a menu and a tick to proceed, but pressing the B button for the menu takes you back to the title. There are no options whatsoever. You won’t be needing subtitles or language options as there’s no dialogue in the game, no story and no hints or UI to speak of. The game is incredibly light. 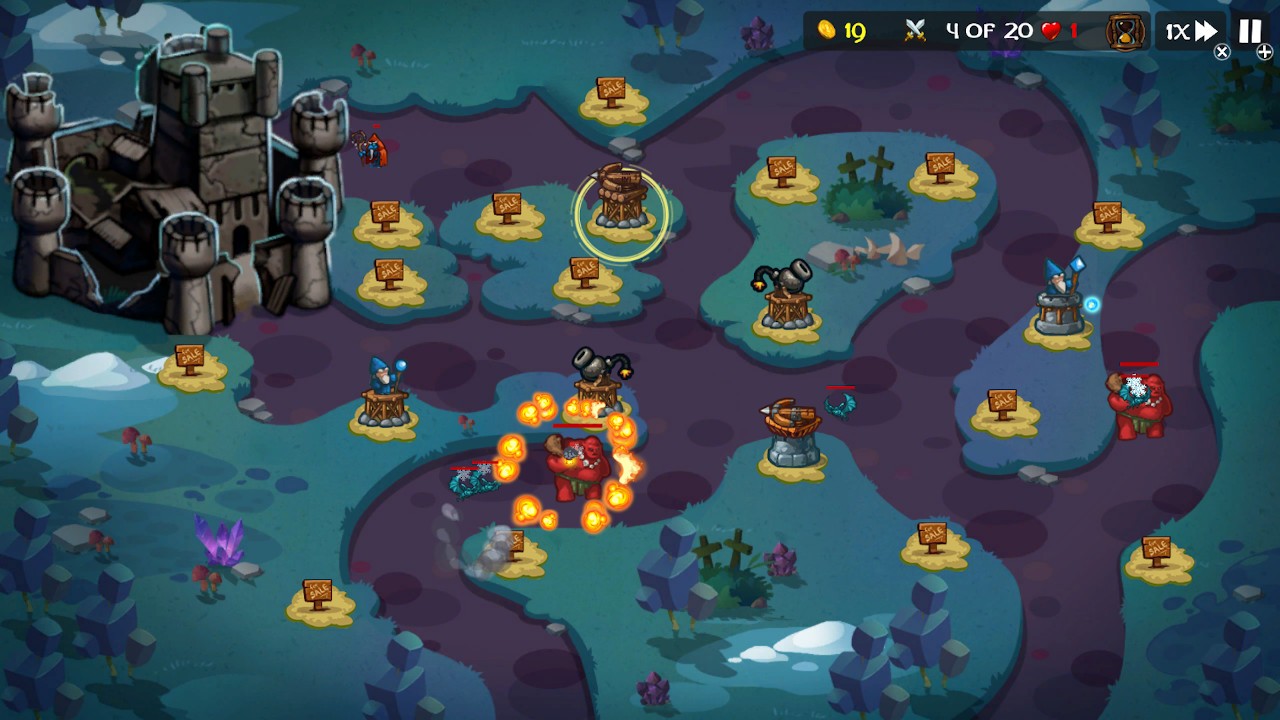 Once you start a level, you face a map with random points to place your towers. In a lot of these games, you get the chance to place them before the first wave, and while there’s a bit of time to do so, the enemies will come, ready or not. You start with a reasonable amount of gold to begin with, but you aren’t rewarded with much so can’t really place towers all over the place or upgrade very quickly. The buildings themselves are self-explanatory on face value, but there is zero feedback on the types of enemies; no bestiary, no advice whether an enemy is vulnerable to spread damage – you have to find out yourself. The problem is, there is such limited opportunity to experiment that it’s hard to find a strategy that works that isn’t boring.

In the first few stages were these wolf-like creatures that were still images that moved on the screen. Infantry is animated, but these cutouts were lifeless. I tried arrows, cannons, magic and eventually a crossbow? The latter did the most damage, but you could only build one every three or four waves and almost impossible to get a perfect on the level. Not that you need one. In the end, I spammed practically every level with arrows and upgraded them. They were the cheapest tower and when upgraded would mostly one-hit-kill anything, but this was such a boring strategy, and it wasn’t long until I realised that there was no incentive to do so. 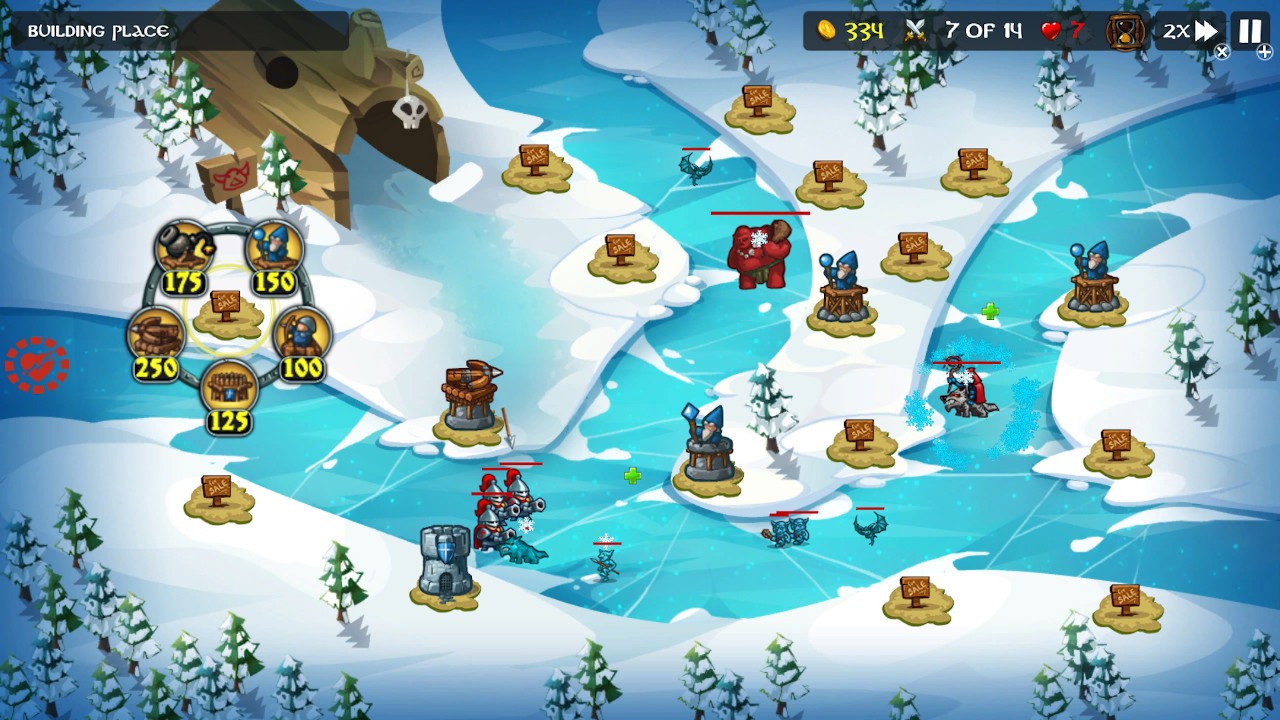 With most tower defence games, you’ll get a rating at the end in the form of stars – similar to the Angry Birds model. However, there isn’t anything. All you need to do is survive. You start with ten hearts, and each time a unit gets through, it takes off a heart; get to zero, and you have to restart. Every unit is worth one heart, so even the ogres/trolls (I don’t know what they are as there’s zero info) do one damage, so it doesn’t matter who your towers target, as long as you have one heart at the end, you’ll unlock the next stage.

The upgrades make a difference, but as mentioned, the game is quite frugal with awarding gold, so I found the game to be about quantity rather than quality. I lost count how many times I restarted a level – usually the case because I want a perfect score, but in this scenario, it was because each strategy I’d try didn’t work. Build a barracks to slow down a wave, and you get one man and have to upgrade to get more, but they only target ground units. Setting up the crossbow didn’t target air enemies, which surprised me, so it was back to installing arrow towers yet again and upgrading them, hoping for the best.

On later levels, I would fill the screen with arrow units, upgrade them, then gradually sell one-off at a time and make a canon – to give it a bit of variety, but it just became boring. With nothing to unlock other than a slow release of upgrades for your towers, no hero units, no explanation on enemy units or weaknesses, I lost interest, and I love this type of game. Despite not being a fan of Fantasy Tower Defense, I played this a lot, naïve in thinking it would get better, but it never did. Hopping back to the initial comment about no options came back to haunt me too, as every level plays the same soundtrack, and it’s incredibly monotonous. You can’t switch it off and muting the game because the music is dumb as you can’t hear the sound effects. Fantasy Tower Defense isn’t unplayable, but it’s also not got much going for it either.

If you’re a fan of tower defence games, you might come away disappointed with this title. It lacks any objectives, incentive and dare I say, fun, for this to be a game you’re likely to play for long. There’s plenty more in the genre out there that excel over this.