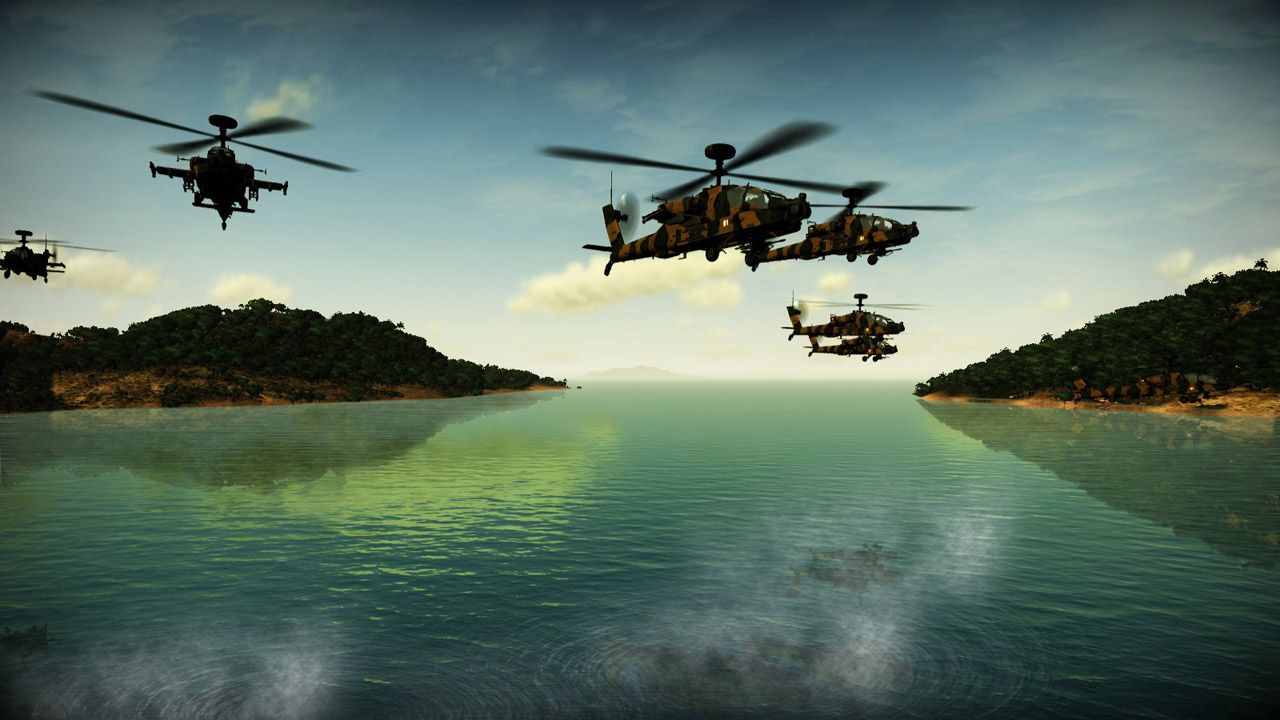 Simulation or arcade? I recently reviewed HAWX 2 and criticised it for not picking a side – that certainly isn’t a problem that Gaijin’s unapologetically sim-centric Apache: Air Assault suffers from. For those raised on the arcade sensibilities of the Ace Combat and HAWX franchises, Apache: Air Assault’s unforgiving controls and decidedly slower pace may be somewhat off-putting, but for those who have been waiting patiently for the first realistic, genuinely challenging air combat game of this generation, well, Apache: Air Assault is it and, you know what, it’s all the better for it.

Despite their history in the flight simulation genre, Gaijin Entertainment has never developed a video game based on helicopter air combat before – not that you’d know from Apache: Air Assault mind; it feels assured, technically solid and wholly authentic. It certainly doesn’t have the wow factor of the more arcade-friendly air combat games currently available and has little to no interest in telling a compelling story, but it does have some extremely challenging gameplay, a collection of painstakingly authentic Boeing built Apache helicopters and a handling model that caters to both the casual and the hardcore.

On its default difficulty setting of ‘Training’, Apache offers up a decent enough challenge, but will nonetheless be immediately playable to the majority of gamers. It delivers a reasonable level of control over the pitch and roll of the helicopter without ever letting the advanced physics get in the way of the core gameplay. Getting your reticule over targets isn’t too tricky and getting your Apache to go where you want feels like second nature pretty much right from the off. Bang it up to the ‘Realistic’ setting however and boy, do you have a very different game on your hands.

Even without enemies to deal with, Apache on the Realistic setting is still a challenge. While I’m sure veterans of flight simulators will call me out as something of a skirt, for the majority of gamers, just getting the Apache to go where you want will be difficult enough – the pitch, the roll, it’s all, well, it’s all very realistic funnily enough. Losing control is very easy and trying to line up a shot can be a very infuriating and even somewhat humbling experience to those accustomed to more forgiving control methods. The thing is, console gamers are used to jumping in head first – kicking ass and taking names and all that. Try that kind of approach in Apache though and you’re gonna get your ass handed to you quick fast.

Regardless of whether you’re playing on the Training or Realistic setting, Apache could have done with a few more tutorials. I know they’re not renowned for being exciting and in many of today’s console games, hand holding is actually a little too prevalent, but for a game as unforgiving and potentially technical as this, the decidedly brief tutorials never feel as in-depth as you would hope. Sure you get a quick run through of each weapon, but you get told once and only once…it’s like an episode of ‘Allo ‘Allo! 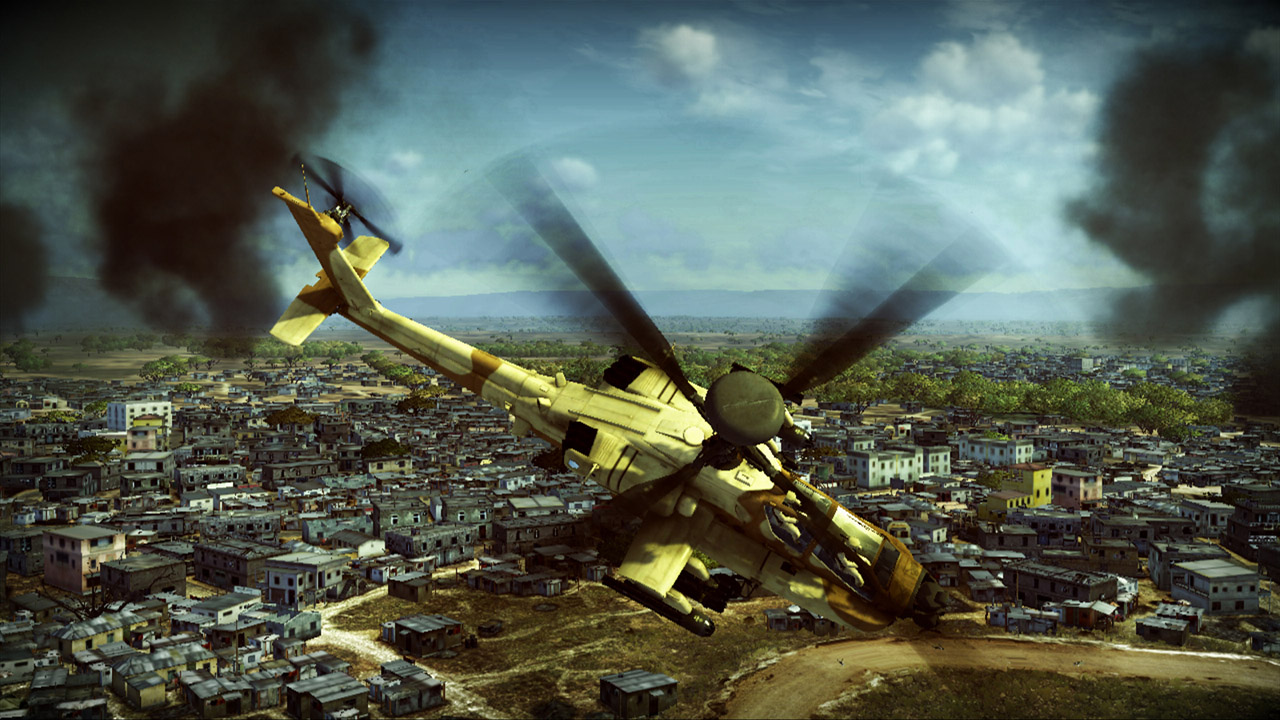 Once you do get to grips with the controls though, it becomes pretty clear the message that Gaijin are trying to convey – Apache’s are bad ass. With an array of deadly weaponry and the ability to perform some truly outrageous maneuvers, every one of the Boeing licensed Apache’s that the game has to offer are nothing short of killing machines. Be it specific ground troops, armored vehicles or aerial enemies, the Apache’s have more than enough technology and firepower to take them down en masse.

Although the majority of the gameplay boils down to little more than go there and blow up that, thanks to the games consistently satisfying combat, Apache: Air Assault remains entertaining for just about the entirety of its 16 single player campaign missions. When attacking in the traditional manner, the machinegun is handled automatically, leaving you free to rain down the thunder with an abundance of rockets and missiles. It may sound simplistic enough, but when combined with the somewhat tricky handling and potentially devastating AI, skirmishes tend to be tense, exciting affairs.

The enemy AI might throw up the occasional curveball (retreating enemies kind of circle rather than actually retreat) but you try charging in head first and chances are that they’re gonna blow you clean out of the sky. While tactics don’t play a huge part in the experience, it’s advisable to take into account the strengths and weaknesses of each of your weapons and attack each unique type of enemy in a specific manner. It’s no good charging into artillery and armored vehicles, you’re better off picking them off from a distance with long-range weaponry before moving in closer and taking out the remaining land units. It’s hardly hardcore tactical warfare, but you do need to deal with each individual situation accordingly.

Although the standard gameplay doesn’t stray too far from the genre fundamentals, Apache does give you numerous chances to mix things up by encouraging the use of Manual Gun Views. This is a bottom mounted camera fitted with thermal vision that can be used to take manual control of the turrets in order to take down ground troops. When being used, it plays out much like the enforced turret missions from HAWX 2, but the fact that you can dip into it when and where you like makes it a much more appealing and tactically integrated option.

The 16 campaign missions can also be somewhat awkwardly played in single screen local co-op. While I’m sure it sounded like a great idea on paper, with one player controlling flight and the other in control of weapons, it works only fleetingly as something of a unique novelty but doesn’t really deliver enough excitement to carry it through a full 16 missions. Online co-op, on the other hand, is a completely different kettle of fish. With 13 unique online co-op missions to play through, Apache really comes into its own when played with an equally enthusiastic pilot flying at your side. Tactically teaming up to pick off targets and coordinating large-scale attacks before watching on as an unholy hail of missiles and rockets lays waste to the enemy below is a sight to behold. 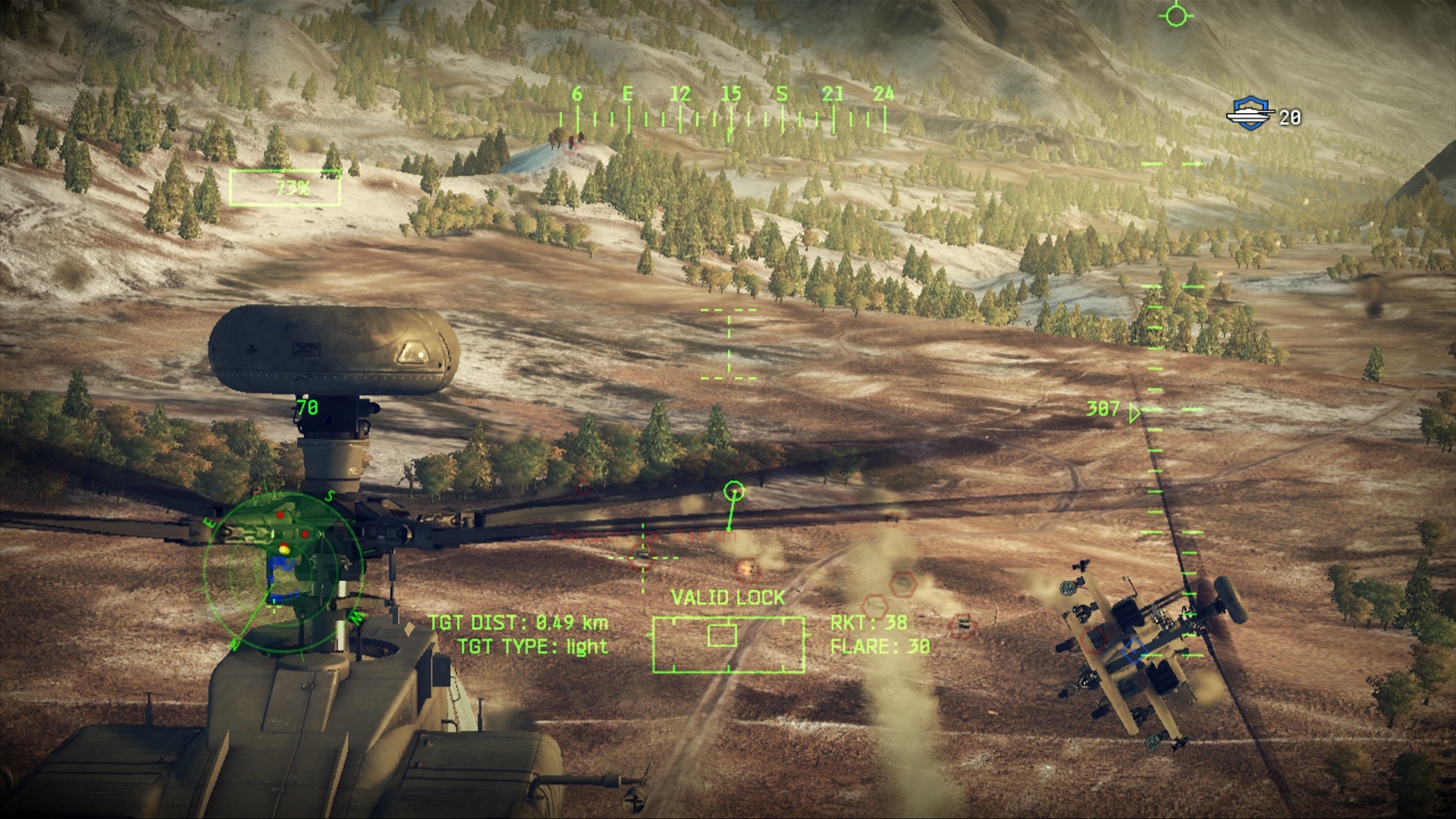 Another option adding to the game’s longevity is the surprisingly addictive Free Flight Mode. Although the name would suggest little more than an opportunity to take in the game’s scenery while you get to grips with the controls, it’s actually something of a customizable mission editor in which you can choose your specific Apache, level, and loadout before adding whatever enemies you see fit. While it’ll certainly prove a pleasing distraction for the majority of gamers, for the hardcore looking for a serious challenge, this is where they’ll find it.

I know I’ve left it late to mention the game’s story, but let’s just say it’s not one of Apache’s strong points. There are some minor radio chatter and a brief description of where you are and what you’re supposed to be doing before a mission, but honestly, if you’re looking for a compelling narrative, look elsewhere. It does progress as the game goes on but it’s really hard to care about and it’s clear that this isn’t where Gaijin’s priorities lay when developing the game.

Equally, if it’s cutting edge graphics you’re after, HAWX is further on the shelf. While each of the incredibly detailed Boeing Apache’s look fantastic from both the cockpit and third-person perspective, the world below simply hasn’t been blessed with the same level of attention and care. The landscapes are uninspiring and suffer from a strange washed out look while enemy units have the kind of animations you would expect from a video game circa 2002. Still, Apache: Air Assault is all about one thing: the Apache’s – they look great, they handle great and I’m sure for a large majority of flight simulation fans, that’ll be more than enough.

Apache: Air Assault certainly won’t be for everyone. Despite the Training difficulty setting aimed at making the game a viable option for casual players, this is first and foremost a title developed for a niche market that has been starved of a decent console flight sim for far too long. With little to no serious competition out there, I’m sure fans sick of the OTT aesthetic and handholding mentality of recent air combat releases will lap this up. For the rest, well, as long as you know what you’re getting yourself into, there is a lot to like here. The Training difficulty helps ease players into the experience and while presentation and variety may not be the games strong point, there is enough in the way of satisfying combat and content to make Apache: Air Assault well worth a look.