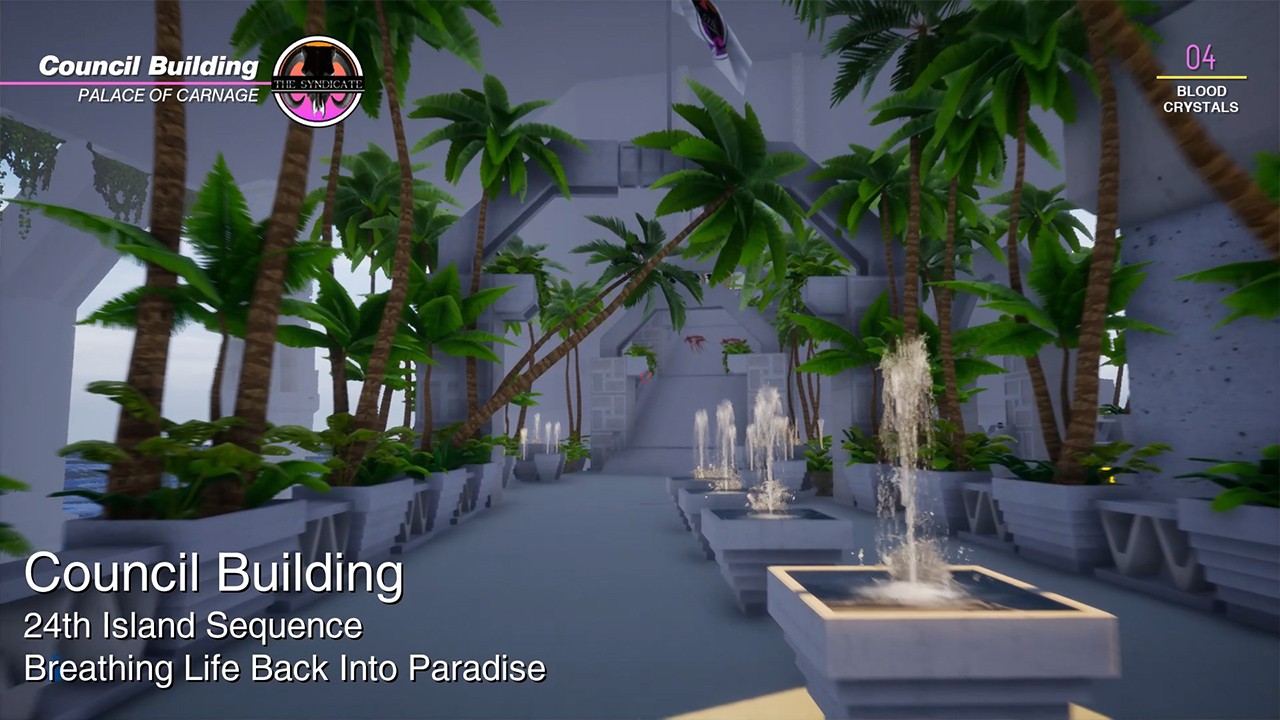 I’ll be honest – I hate visual novels. I’m not a philistine, I absolutely adore a good read, but I’ve always found games that rely so heavily on death-by-text tiresome. It’s part of the reason I’ve overlooked a lot of J-RPGs, even ones that have been a critical success – I’m just to put it simply, too lazy to soak in the literature. But Paradise Killer is intensely intoxicating – a strange, open-world Phoenix Wright played out in a Neon soaked nightmare. The island is full of secrets, packed with darkness underneath its strange, bright cityscapes and sprawling beaches. All in all, it makes for one of the most compelling games I’ve played in a long time.

Paradise Killer has, rather begrudgingly, convinced me that text-based gaming is worth investing time in. It takes place on Paradise 24, which, like all previous attempts, is less than perfect – a corrupt, demon-infested island not suitable to house the God’s it eventually wants to be home to. The island is ready to reboot, and this time, the Syndicate has promised 25 will achieve its goal of ultimate perfection. Unfortunately, the night before the rebirth is due to begin, the council is brutally murdered, halting any hopes of moving forward to the new, improved next step in the Syndicate’s Paradise project.

To solve the crime, the Syndicate has allowed Lady Love Dies to return from her exile to investigate the murders. She’s just one piece of a bizarre jigsaw, part of a collection of bizarre characters that make up the cast of Paradise Killer.

Your main task, as LLD, is to talk to this selection of freaks and determine who killed the council and why. Luckily, the narrative is so strong and well written that each character is instantly interesting to talk to. They’re deceptively deep, and while working out the killer is clearly your main aim, it’s almost as interesting to get lost in the rabbit hole that is these strange people, and the history of the Paradise islands they inhabit. 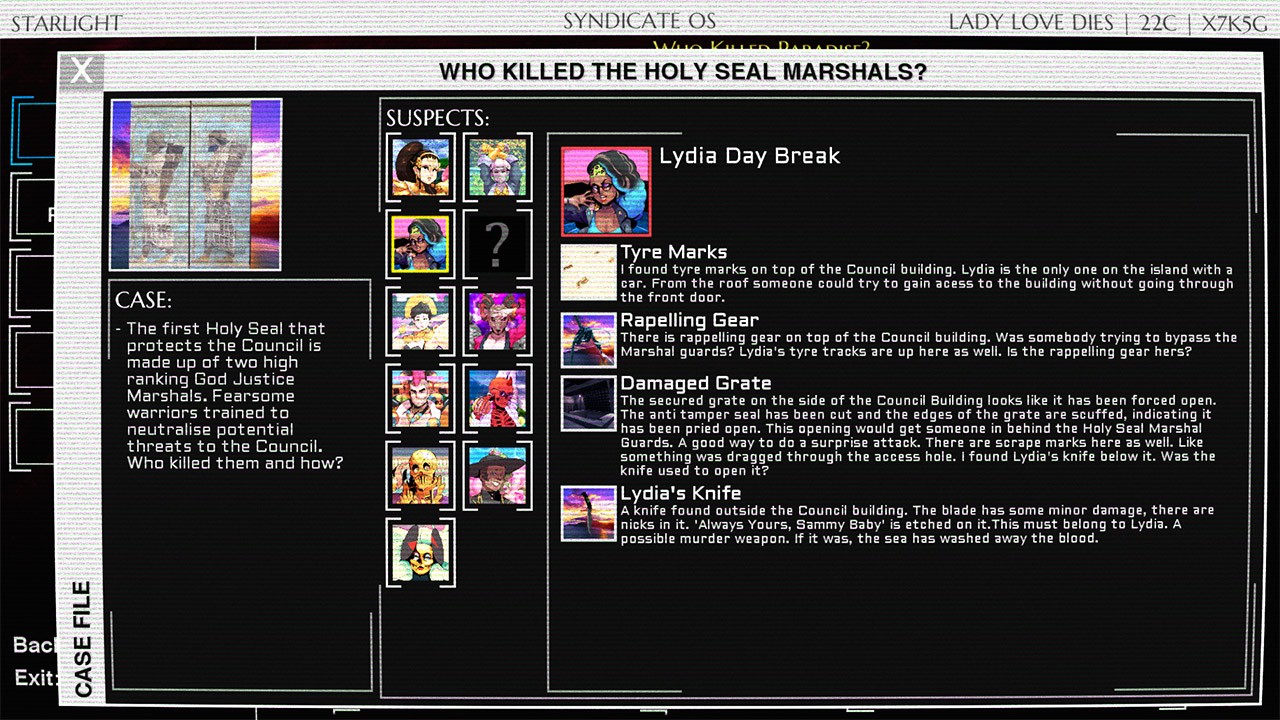 Meeting Doctor Doom Jazz (Paradise Killer has a penchant for names that sound randomly generated), for example, opened up a story arch involving his past relationship with Lady Love. The more I divulged in her old flame’s history, the more interested I became in discovering more about her relationships with the rest of the inhabitants. I became enveloped in an otherworldly Eastenders, and to be honest, I loved every second of it.

But perhaps the most compelling reason to give Paradise Killer a chance is its sprawling, interesting open world. Every bit boasts hidden relics, or at the very least, scattered currency in the shape of Blood Crystals, which you can spend on upgrades for your personal computer. Exploring the effigies to long-dead gods and the Neon-soaked high-rises is always interesting, and even if you find nothing to help push the investigation further, you’re bound to find something that sheds light on to this strange world.

Helping you get around is your personal computer, which you can use to find suspects and places of interest. It’s actually a bit of a jack-of-all-trades device – it can help you hack computer terminals, store’s any music you find and you can pick from a series of skins to give it your own edge.

Perhaps the most useful tool, however, is the computer’s storage of your investigation fact file. Rather than bunch everything together for you to sort through yourself, it handily compiles all information neatly in separate folders for each suspect. Whenever you discover any new evidence or rule anything out, you can easily review it under the suspects file. It makes the whole task much more palatable, especially for someone like myself that wants to focus on the story rather than re-reading suspects’ alibis. 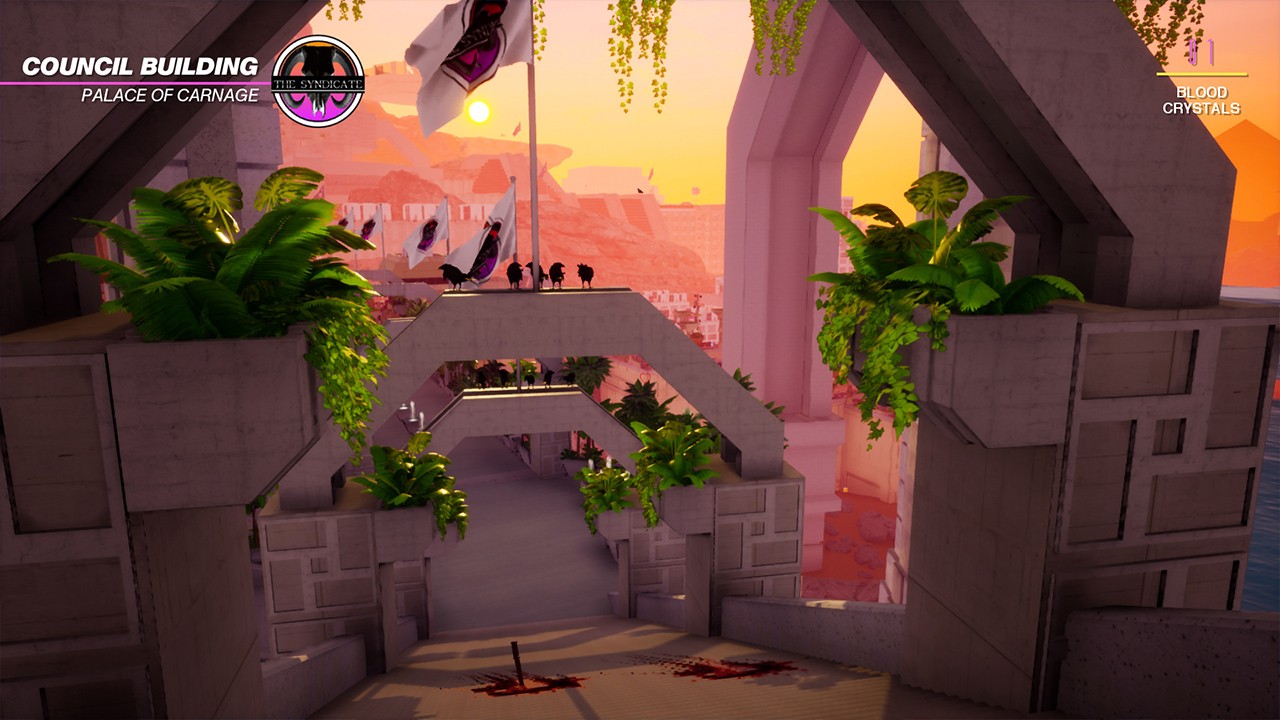 What’s so interesting about Paradise Killer is that you never feel restricted. It’s truly open, and you can investigate the murders at your own pace. If you want to soak in some history of the islands instead, that’s fine, you aren’t forced to take your case to court until you’re ready. You can also talk to anyone in whatever order you see fit – it never tried to force your hand.

It’s not without its issues, however, but they’re thankfully few and far between. I personally found the controls a little floaty, to begin with, and several times I dropped off cliffs I had no intentions of jumping from. You get used to it, but it’s not my favourite thing about Paradise Killer.

It’s safe to say that the art style won’t be to everyone’s taste (the character design is great, though) but the soundtrack is unarguably incredible. It’s a fantastic selection of vaporwave electronica, Cowboy Bebop-esc J-Jazz and summer sax pop, hitting some of the best beats in gaming memory.

Paradise Killer is easily one of the strangest games I’ve ever played. By the time I reached the end, took my case to the judge and entered the end-game trial, I was absolutely beat, but it was so satisfying to bring all these plot lines to an end. It’s incredibly intense, often confusing, but its memorable cast will stay with you long after the credits roll.