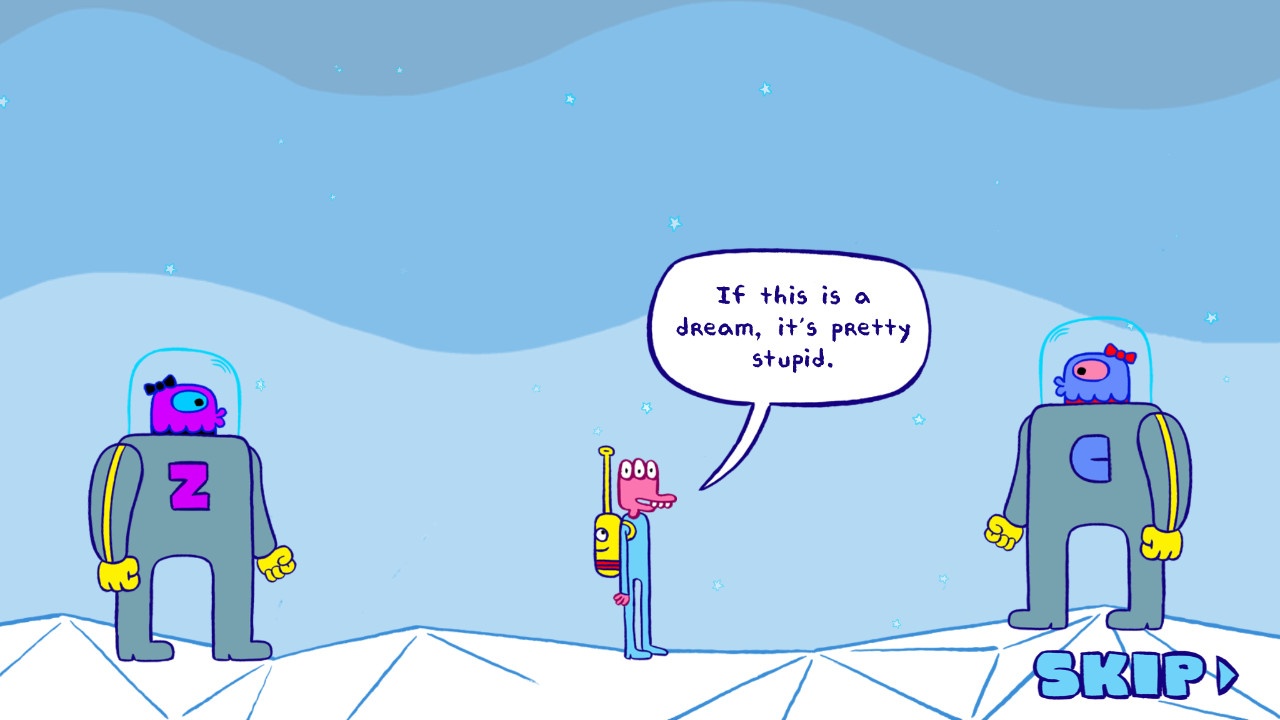 Do you like the humour of James Kochalka? Never heard of him? Me neither, but with most of his success in the USA that isn’t too surprising. He is however a multi-award winning comic writer (as well as a musician) specialising in bright, simple comics with a surreal sense of humour.  His series of graphic novels aimed at a younger audience, Glorkian Warrior, has now been turned into a video game in conjunction with Pixeljam and a successful Kickstarter campaign.

Glorkian Warrior is an especially goofy alien looking to protect his asteroid from swarms of aliens with help from his sentient backback ‘Super Backpack’ who shoots a constant stream of lasers skywards. Glorkian Warrior’s role is therefore to run left and right to direct Super Backpack’s firepower, and occasionally jump, fending off the aliens for as long as possible. That’s right, there’s no way to actually win the game so the objective is to constantly increase your high score, mainly by collecting Space Crackers (Glorkian Warrior is a big fan of Space Crackers). 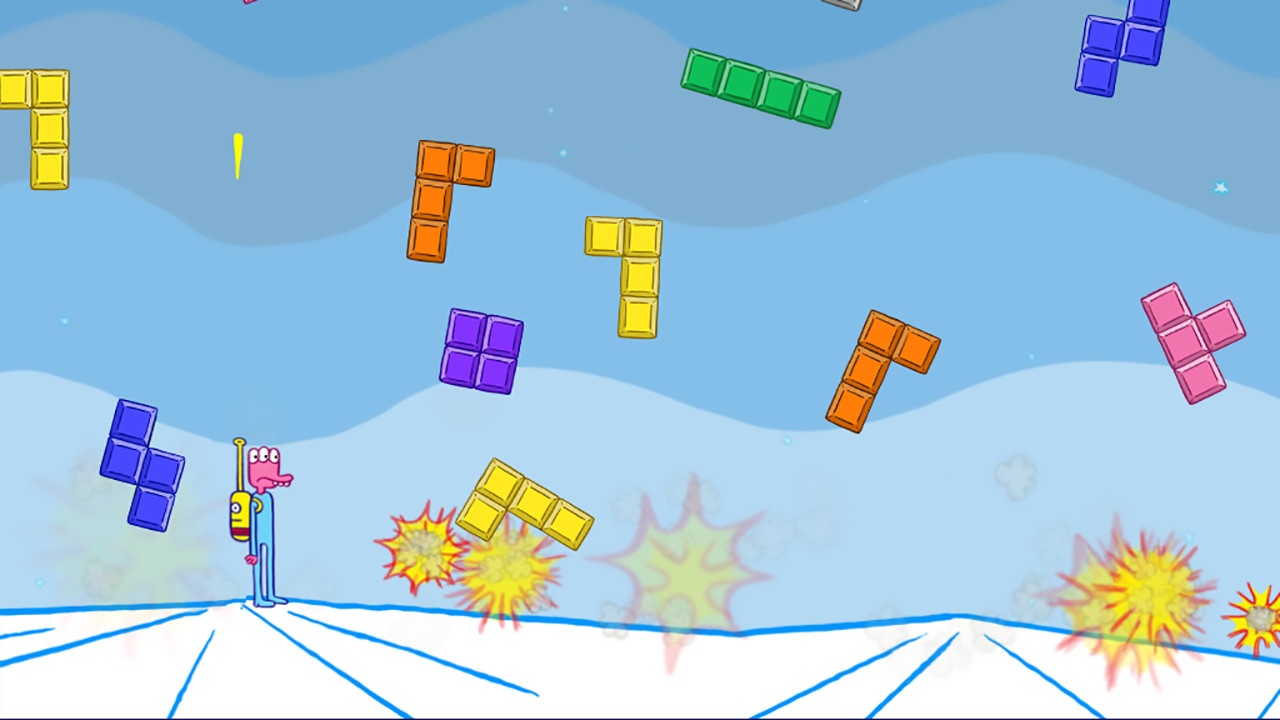 The game plays out like a particularly surreal version of Galaga as swarms of varied aliens buzz around the sky, occasionally flinging a projectile down at Glorkian Warrior himself. Occasionally a spitter alien wanders across the ground or a boss alien shows up to complicate matters but for the most part this is how the game goes, with periodical showers of meteors or Tetris blocks to avoid. However things are never dull with the randomly generated enemies (and their random attack patterns) spilling constant Space Crackers and a whole host of power-ups to collect.

The cute, hand-drawn 2D graphics are integral to the charm of the game – being especially colourful and attractive. However things can get confusing when there’s a lot going on in the screen and you can’t always make out all the enemy units and the slugs they’re spitting at you, it’s not a bullet-hell sort of game but it can occasionally feel like one. 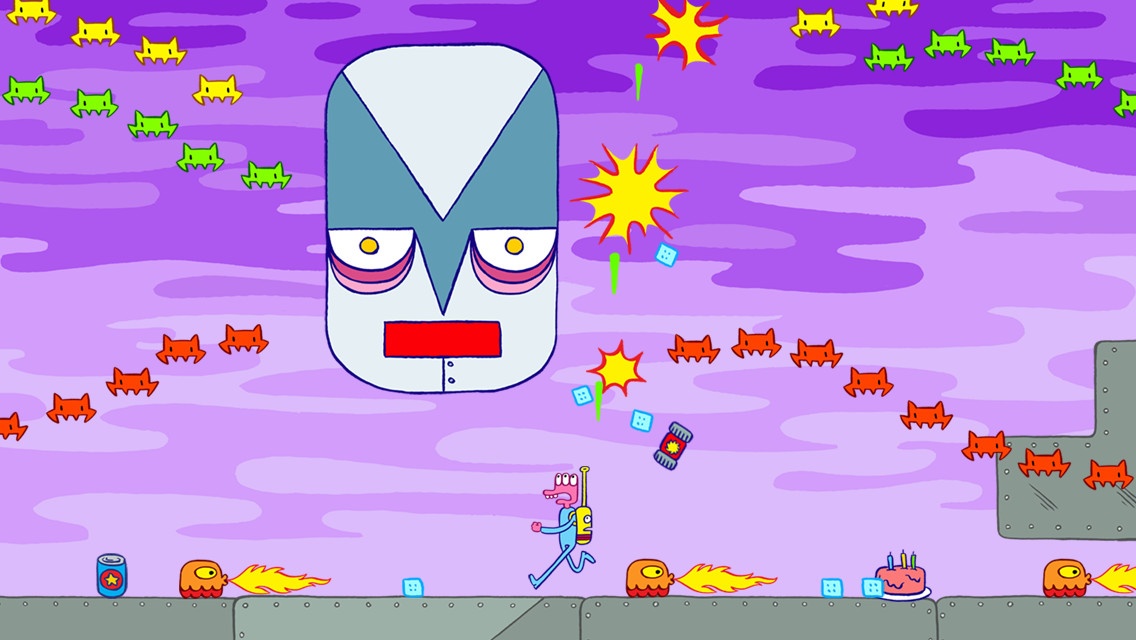 The other contributing factor is the silly sense of humour, as each game is starting with one of many bizarre conversations between Glorkian Warrior and Super Backpack – plus occasional contributions from sisters Zoe and Chloe who usually turn up to insult Glorkian Warrior. Character actually emit a series of strange beeps and whistles (imagine Pingu in space) with translations appearing in speech bubbles but if anything that makes the communications even funnier.

Beyond the random humour the gamplay as it’s core is still very engaging and does a good job as 2D shooter. Hardcore gamers may find it a bit basic but there is definitely a ‘one more go’ factor and compulsion to increase your score. A whole series of power-up unlocks and bonuses can be unlocked with your cumulative high score, including excerpts from the graphic novels, but once you reach 20,000 you’ll find there’s nothing more to unlock – you can either keep going or just reset your score. It’s easy to recommend Glorkian Warrior to anyone after a basic but fun shooter, it may be a bit lacking in long-term options but the humour more than makes up for it.