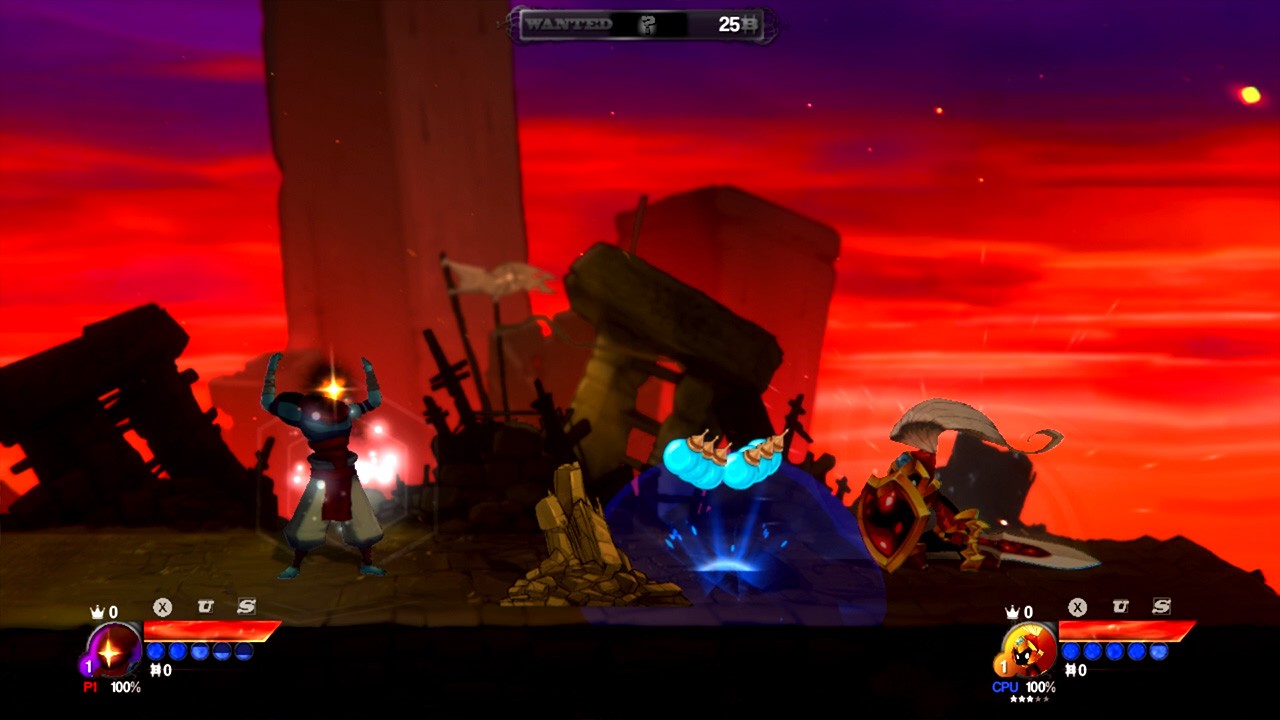 Super Smash Bros. has a huge legion of fans, and for a good reason; there’s a heap of fantastic, beloved characters on the roster, but most importantly, the gameplay is frantic, entertaining and requires a fair degree of skill to go far. Put in the time and it pays off big time and has a smug look on your face when your favourite character demolishes another. An excellent recipe for a fighting game and something I was hoping would translate well with Bounty Battle.

Bounty Battle has a roster that features loads of fan favourites from breakout indie titles such as Dead Cells, Oddmar – a favourite of mine reviewed on this very site, as well as some lesser-known but equally important characters. To have a relatively consistent look throughout, the characters, while definitely identifiable, have a similar look throughout so that the game doesn’t look too much like a scrapbook. It works pretty well, and that’s when everything else falls apart.

You can never judge a game on the tutorial – we all hate them, but running through the moves started raising alarm bells at the speed the game was moving. Sure, on the surface, the artwork was good and all, the moves a little basic, but in practice, probably effective. Unfortunately, the movement was so sluggish, it felt like playing the game underwater. Still, I stuck it out and fought a battle or two and cut my teeth in the arenas. 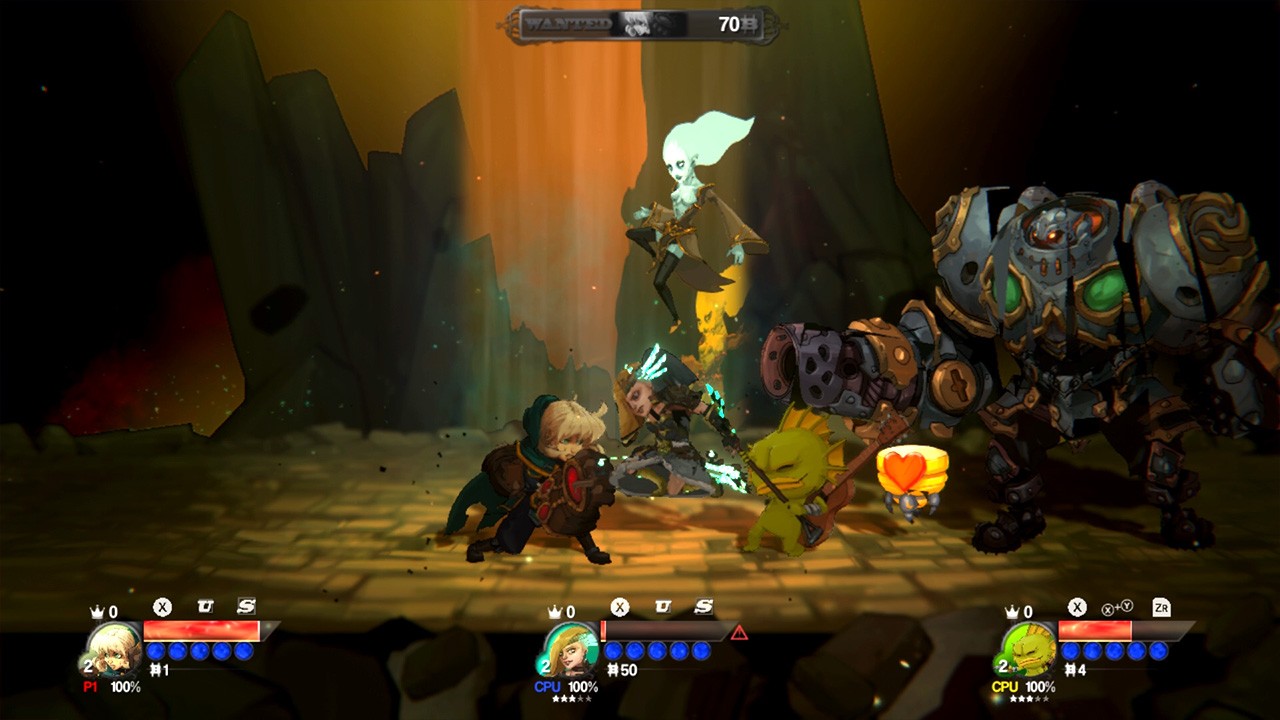 There’s a fair amount to choose from at the start. Though I was aware of most of the characters, I stuck with my favourites and wished I hadn’t bothered as all these franchises were destroyed round after round. Bear in mind that this wasn’t an endless list of fights. The gameplay was so poor that I had to take frequent breaks from it. Was it me? Have these great indie titles taken a massive hit in the face from an abysmal fighter? No, because the game often lagged that an opponent could move out of the way in time. Not that it happens as the AI in the game is pretty weak too.

It almost pains me to give such a negative critique of the game, but it wasn’t a positive experience. As a fan of beat ’em up games – whether one on one, side-scrolling – whatever, I’ve played my fair share of titles to separate the good from the bad and Bounty Battle falls in the latter category. This is such a shame as you’ll find such a broad list of characters not just from beloved indie titles but specifically for the game, and they’re interesting characters in themselves. Still, the game isn’t fun to play, nor are the rewards of completing a challenge worth sticking around for.

The biggest problem shouldn’t be solely with the speed of the game, quite possibly the slowest fighting game I’ve played in the last few decades, but the actual combat. The moves are separated by a light and heavy attack – the latter using up energy that needs to replenish, a special move performs with the bounties you collect, a two-button ‘combo’ and a jump command mapped to the A button. It feels counter-intuitive to play, and when the same controls apply to the somewhat 30 characters in the game, other than the visuals, there’s nothing really to separate them from one another. 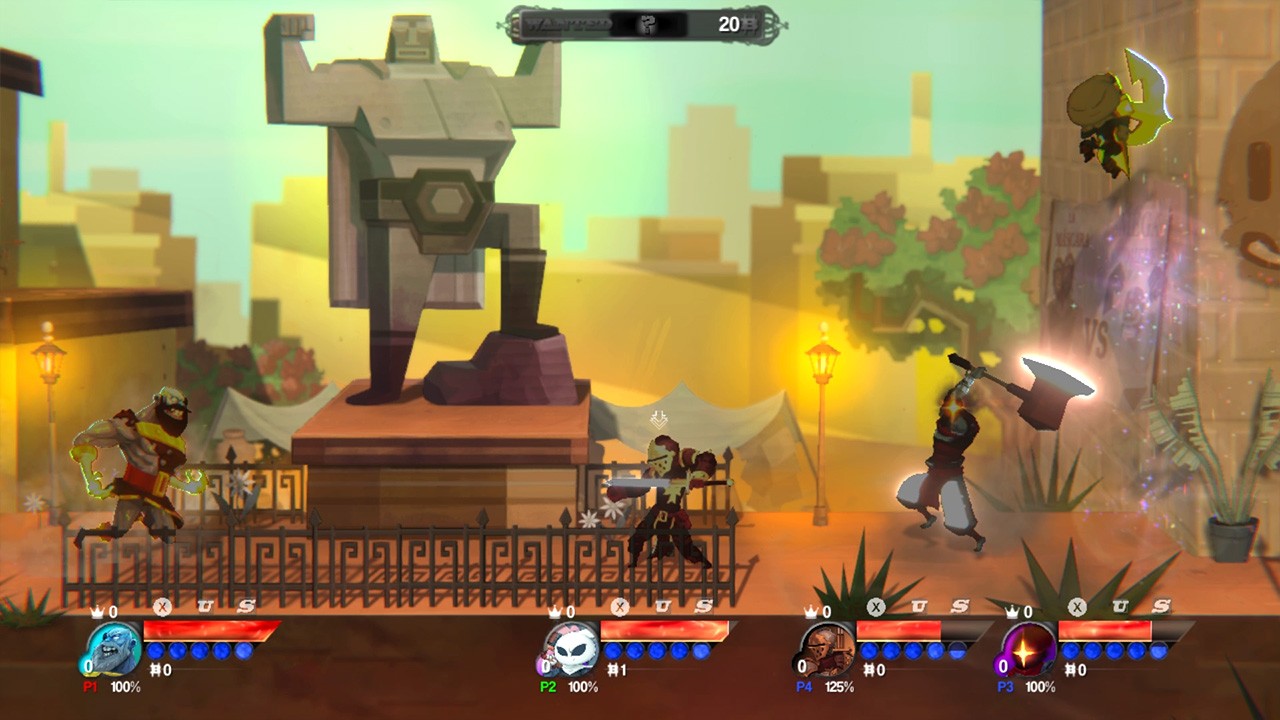 Side-scrolling beat ’em ups can be enjoyed as a solo effort or as a Co-op. With one-on-one fighting games, I think it’s fair to say that there’s an expectation of playing against other players – even for those that get a kick out of solo play would like to fight their mates and hide their star fighter for when things get hairy. Unless you can get someone from your social bubble to join you, you can forget about playing this online.

I’m not one for online play that offer, but it’s a given that there should be the option. Despite getting my arse handed to me on Mortal Kombat 11, I’d still play online just to pull off that three-hit combo until succumbing to another loss. Not in Bounty Battle, there’s not the option for it, and you can’t rely on the AI either – it’s just too predictable with jump attacks and monotony that it’s just worth skipping past.

Having seen the trailer a couple of months ago, I was looking forward to playing the game at some stage. I understand that it’s been on the horizon for some time, and perhaps there was an equal amount of buzz for it too. There’s an allegiance of fans that will be stoked to see their favourite indie characters here. Still, by the time you play it, the jump, hit, jump, hit tactic that was familiar in Mortal Kombat against Goro in the arcades gets so dull that it will test your patience. A big disappointment then.

As a handheld player when it comes to the Switch, I put this on the big screen but even with the introduction to the characters, something didn’t feel right. For once, I should have listened to my gut as regrettably. Bounty Battle is one to avoid.