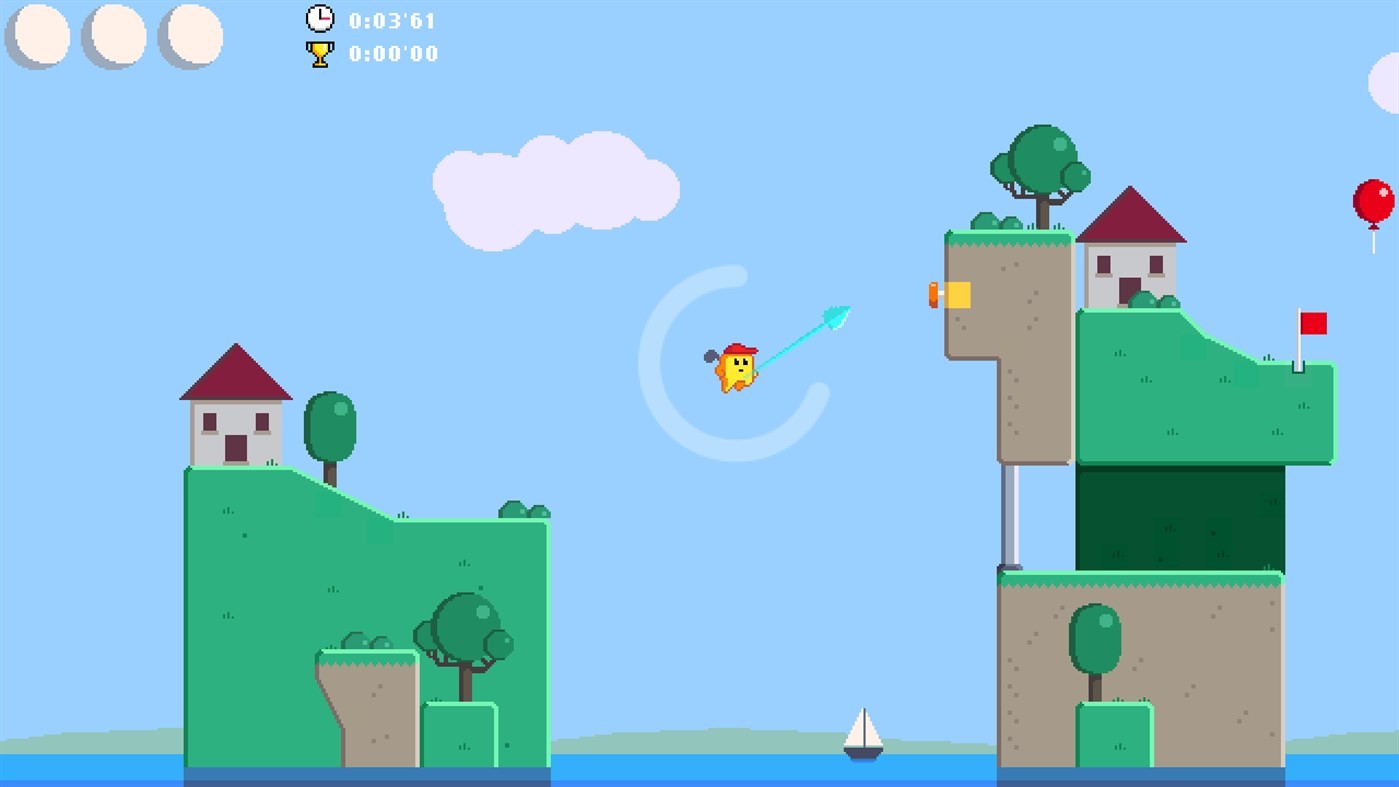 Never in my life have I thought, “I wonder what would happen if a developer mixed The Matrix with Tiger Woods Golf, to create a platform game. Well, obviously this has played on the minds of 2 developers Colin Lane and Brad Erkkila. They have worked with indie specialist publishers Ratalaika Games and made Golf Zero. This title asks you to control a small yellow peanut-shaped character whose only aim is to; jump, leap and avoid all the obstacles on its way to getting the ball in the hole.

This platform sport title spans 80+ levels across 2 different worlds. You will spend your time equally within; Grass Islands and Sunset Hills. You must avoid the fast-moving boulders, spinning saw blades, and flying bullets. Once you complete these tasks, you must time your swing perfectly and hit one of 3 of your balls in the hole. If you fail, then it’s game over, and you begin that stage again. Our peanut protagonist doesn’t have multiple lives, so if you collide with an obstacle, or get hit by an enemy, then you will die, and you’ve guessed it, start again.

The gameplay has been split into 2 distinct categories. The main story mode, which has already been touched upon, and the competitive speedrun. This pushes you to your limits of both skill and your friendship with those you take on. The main mode has a grading system that is highlighted once you get to the finish. You will be rewarded with either a silver or gold medal, 99% of the time, hitting the floating balloon will give you the top prize, but occasionally you must also get a hole in one. You may think, “That doesn’t sound particularly tough, a bit of platforming with some golf, should be easy.” Well, most of the time you must jump across chasms, avoid spikes, and hit your ball in midair as time passes slowly like a scene from The Matrix. If you misjudge your approach, or cannot hit the ball correctly, then frustration will build up, and you will scream obscenities at your TV screen. 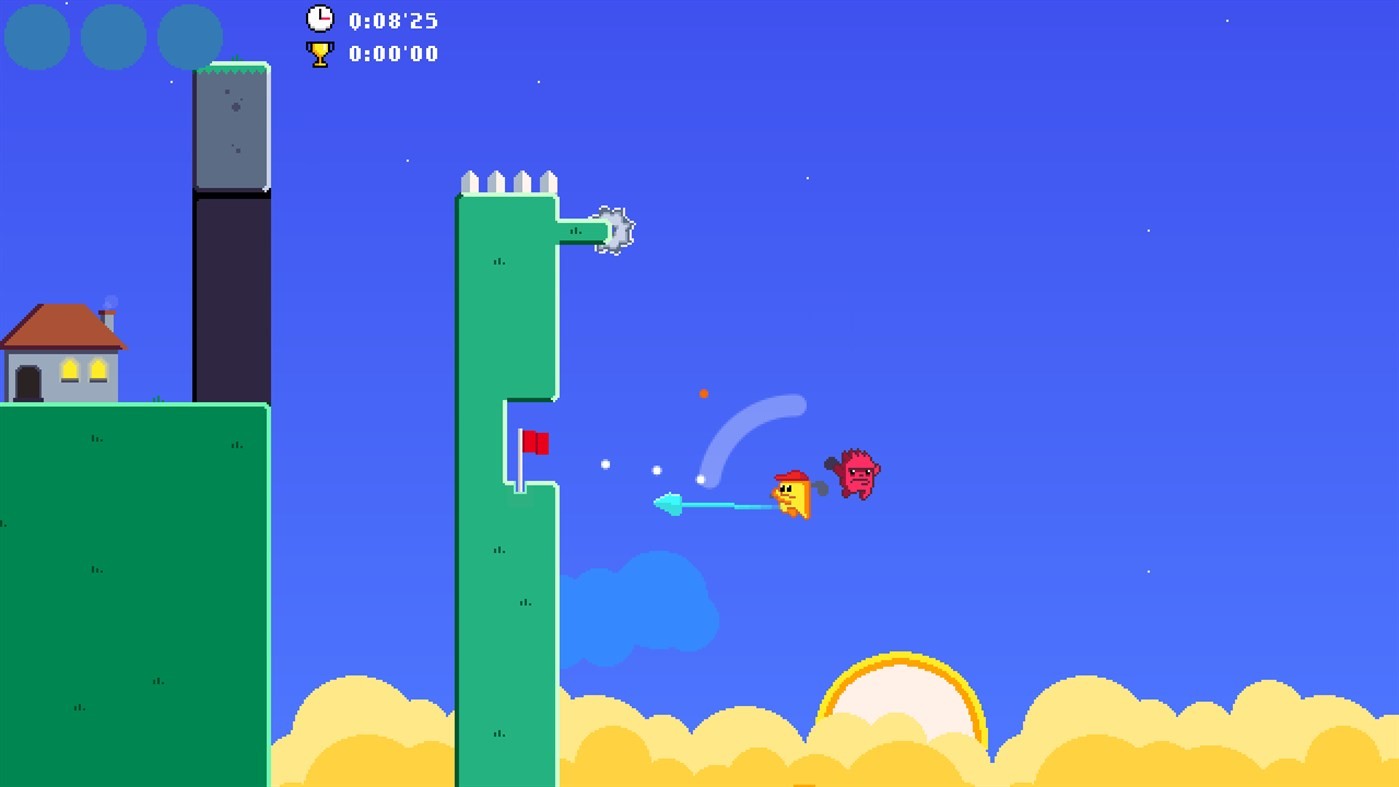 While playing the speedrun mode, the pressure to get the perfect run really adds up, and you will make silly mistakes. It was joyous watching friends try, and fail, only for me to follow suit, and stumble into the same traps and pitfalls. This additional mode made a basic gaming concept much more in-depth, and converted it from being a simple, albeit quirky platform title, to something that could be played on a Saturday night with friends.

Golf Zero plays out in a 2D perspective and uses a pixelated and cute art style. For fans of the old school Mario games, the graphics will feel very familiar, and you will enjoy how the developers have presented their ideas. Vivid colours and simple stage layouts await you as you take many a leap of faith on the way to hitting that ball in the hole. The contrasting colours and imagery make it very easy to identify the traps in each level. I liked how the 2 worlds took a unique approach, and this helped to keep the action fresh and less repetitive.

I wasn’t, however so taken with the audio approach for this title. It was a little too straightforward for my liking, and the developers played it too safe. A soft synthesised tune plays in the background on each level, and limited sound effects accompany the action. I would have liked to see some unusual and over the top audio to match what I was seeing on the screen. Crashing noises when the boulders rolled and whirring sounds to go with the saw blades. What I was left with was something much more clinical and definitely void of character. To me, the audio felt like an afterthought. That it was rushed out and bolted on at the last minute. It’s a shame, as such a quirky concept could have been complemented with any sound the developers wished. 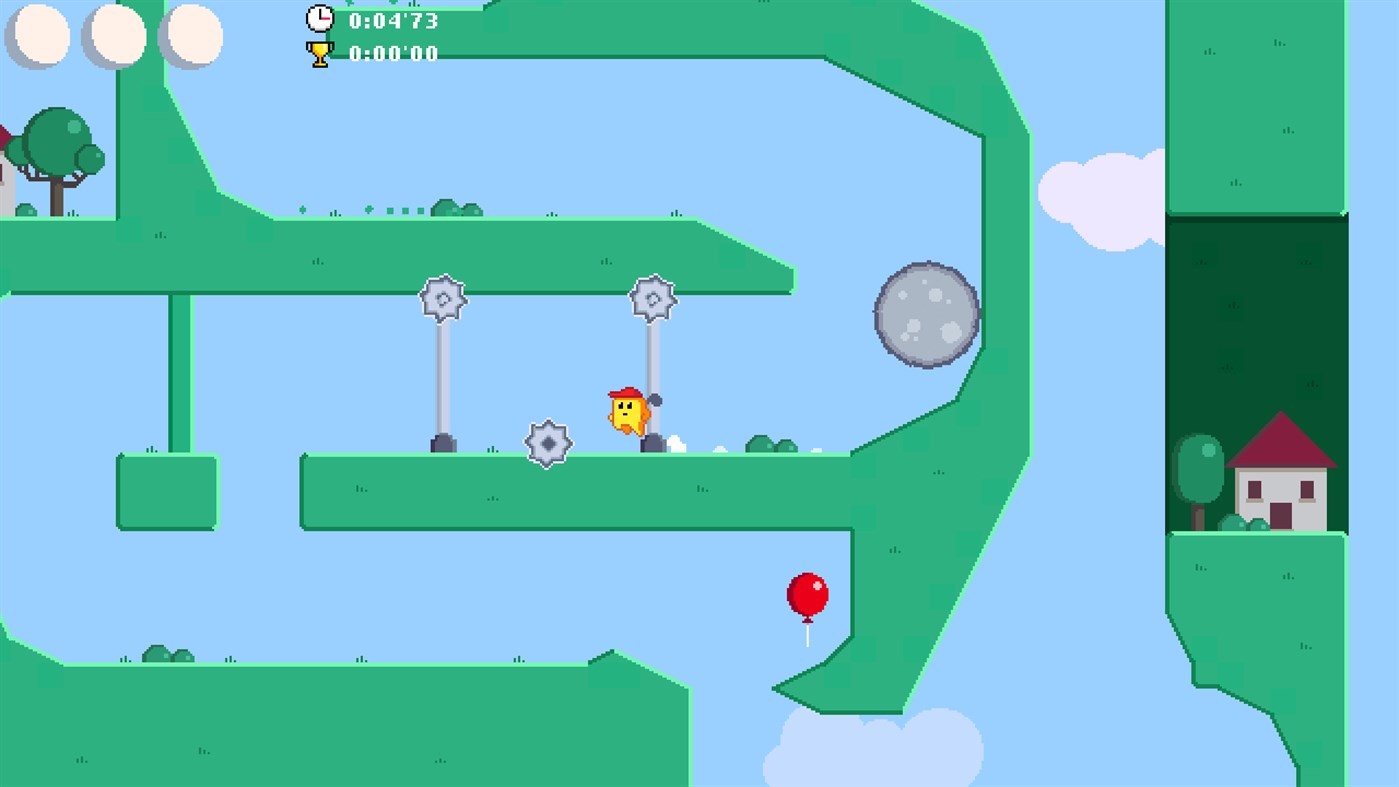 When you have to be accurate with all your movement, and your only aim is to hit a minuscule ball into a tiny hole, you can only hope that the control system is simple to master, and responsive. Luckily, it is. The developers have done well to make it so all you have to do is focus on the gameplay, though I found aiming the ball was a little hit and miss. I think this was a “me” issue, and I’m sure that you won’t be impacted by this at all.

As I loaded the game in, my first thought was, “This will be a quick play, and then uninstall.” How wrong I could be. With every stage offering a gold medal, 80+ levels to explore and a speedrun mode, you’ll have plenty to make you come back for more. The achievement list is typical of a Ratalaika Games title, I had hit 100% in less than an hour, but I wasn’t even halfway through the game. To complete all the levels you must set aside around 3 hours, so this represents reasonable value for money.

When I first heard about Golf Zero I wrote it off without giving it a second thought. Mixing sport with the platform genre seemed too odd for my liking. However, I’m glad that I tried this title, as what I found was a simple yet fun retro quirky title that can be played casually. Do I recommend it? Absolutely! It won’t be on top of everyone’s to play list, but it’s original concept, and unusual idea makes it a one-off, and something that is worth investing your time in. Can you hit a hole in one on every level? With plenty of practice, and lots of patience, you could be the next platforming Tiger Woods.

Golf is supposed to be relaxing, that is until you mix it with precision platforming. Jump, and dodge the obstacles, and make sure to get a hole in one.