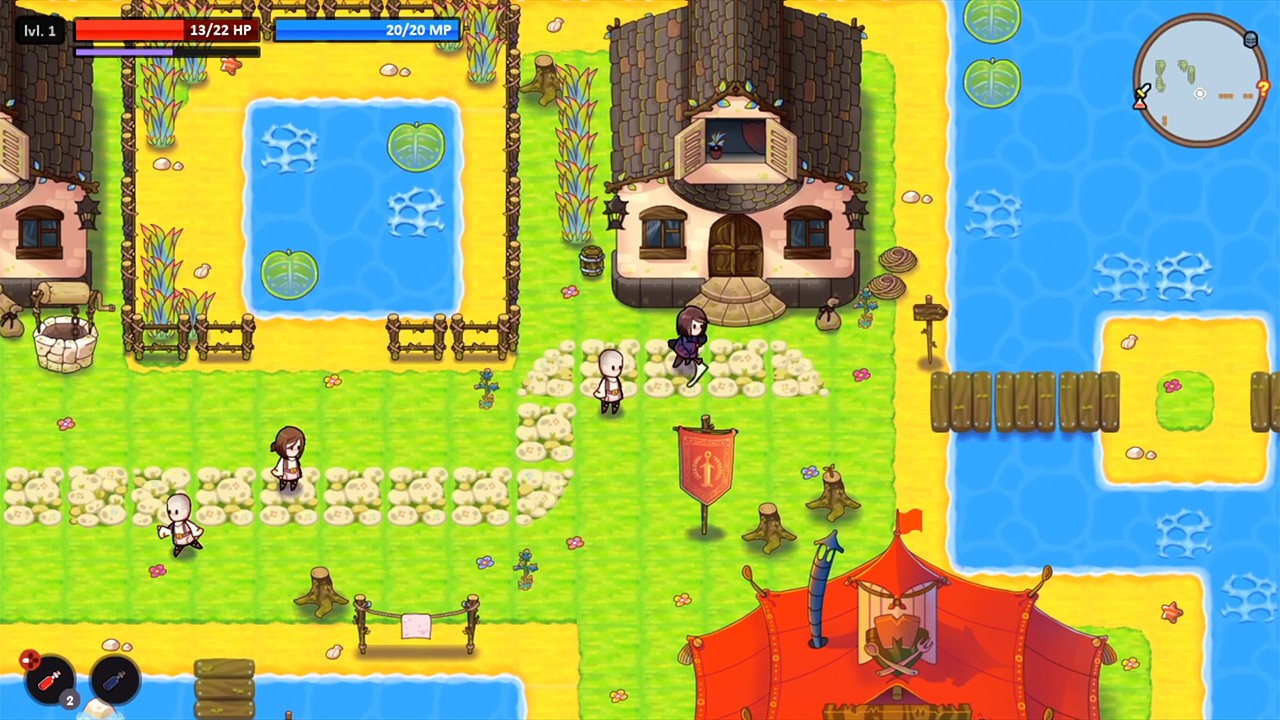 If you told me Weakwood Throne was a tech demo wherein they’re still working out the finer points for a game being Kickstarted with a release date of fall of next year, I would believe you. Because, while the outer appearance of Weakwood Throne is a charming indie game that may have you hoping for some kind of survival RPG where you fight enemies, gather materials, craft, and explore a vibrant world, its gameplay mechanics are severely lacking.

I had wondered why, after performing a precursory Google search as I tend to when I run into a title I’ve never heard of, there wasn’t much information about Weakwood Throne. Even YouTube only had videos of gameplay without commentary, and they all seemed to show exactly what the eShop trailer does: the player-controlled character skating around on a skateboard through grassy areas and sometimes striking enemies and plants. After doing some digging, I noticed that Weakwood Throne had been available for purchase on Steam once upon a time—but no longer as part of stricter measures of quality control wherein developers who paid out positive reviews are given the boot. Can I say definitively that the developer paid for reviews? No. I can say that Weakwood Throne was rated very positively when it was removed and the reviews that existed mentioned aspects that didn’t exist—namely a story of any kind. 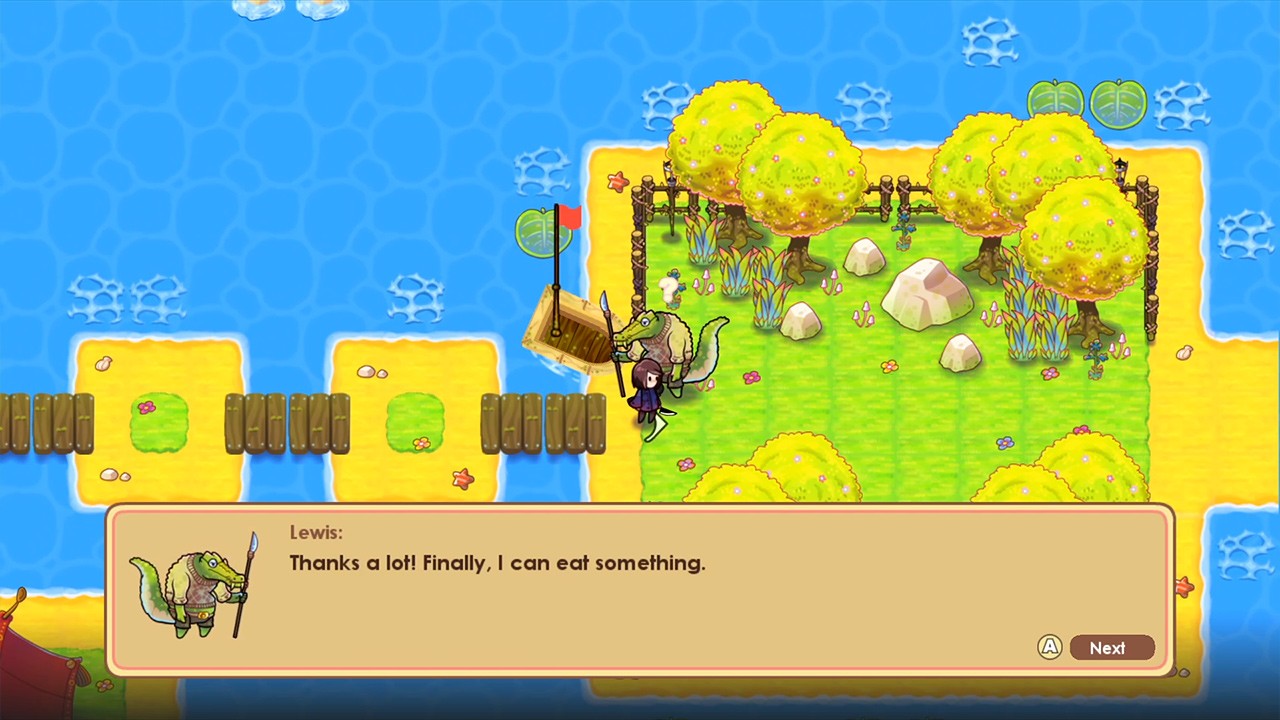 So, give that eShop trailer another look because what you see is what you get with Weakwood Throne. There’s no reason to look any further than a random kid on a skateboard, moving from screen to screen, and beating bushes with a stick. There may be some story here about a tyrannical king and some sort of conflict between shark beastmen and crocodile beastmen, but you only get snippets of that from the villagers who give you fetch quests. If there’s intrigue here, it’s difficult to pick it out of the inane chatter of quest setup and, though there are brief mentions of a greater plot, there’s never actually any exposition to tie it all together. What little writing there is plagued with grammatical errors usually found in bad translations, which only draws attention to this already flawed aspect.

Combat also misses the mark. This statement is a joking reference to the fact that your hitbox is several pixels off and your character steps into their strikes. This means that hitting even stationary objects will take several swings in order to make continuous contact. Enemies, of course, are easy to miss since they’re moving around and having a dodge roll doesn’t really help when their attacks seem to track you. Add to these issues the general weightlessness of your weapon and you have an activity that 1. takes up a good portion of what you’ll be doing and 2. does not control well.

Gaining experience allows you to level up, but you only get a handful of stat points per level. Weapons have high requirements, forcing you to grind through shoddy combat in order to get enough points in one of three attributes to be able to equip something new. This was also poorly handled, given the tiny number of weapons available for equipping early on, and served as insult to injury. 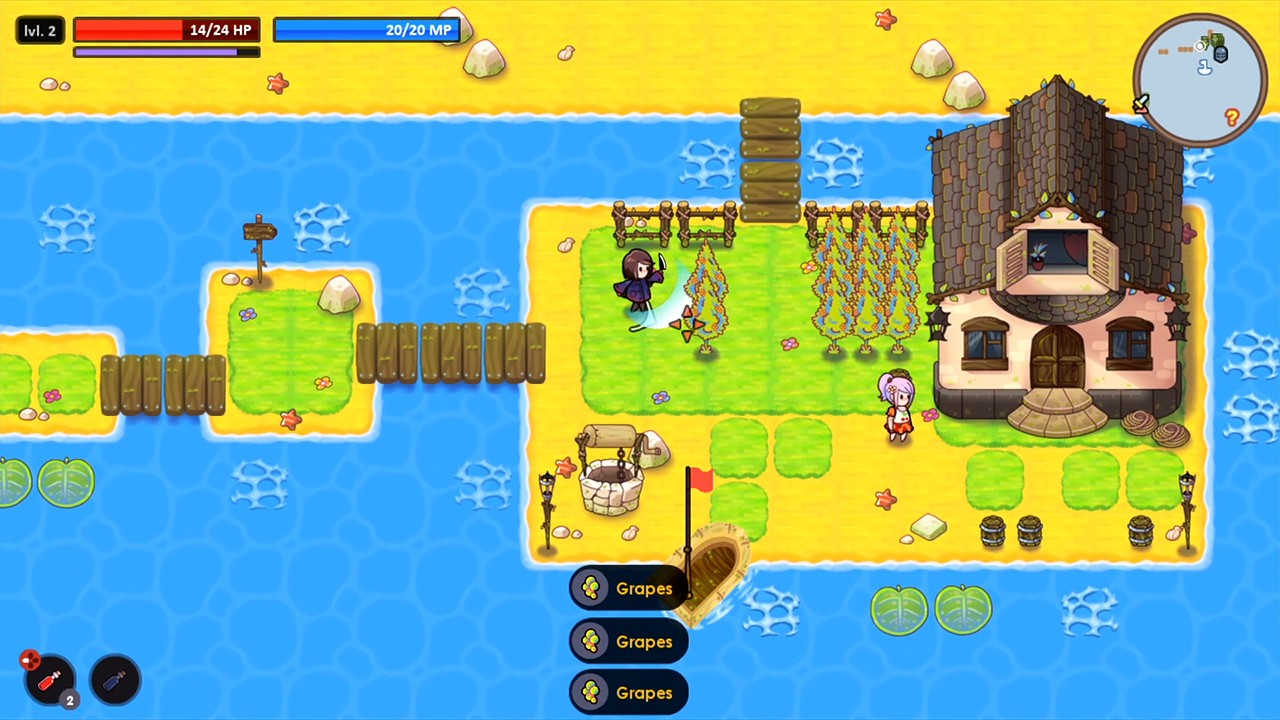 The graphics are probably the only thing Weakwood Throne has going for it, but that depends on your preferences. The simplistic art style is cute, in my opinion, and it was what first drew my interest in the storefront. It swiftly loses its charm when you realize that every house is the same and so is one in every three NPCs-as though they’d been copy and pasted en-mass to fill an otherwise empty world. Weakwood Throne has one single musical track to speak of, which repeats on a loop. It’s peaceful and inoffensive, but after hearing it a dozen times, just playing through the tutorial you’re thrown into upon starting the game, you’ll have had enough.

Weakwood Throne doesn’t feel like a completed video game. It looks okay, and the premise seems to be something people would want to play, but everything else is half baked. What you’re left with is a barebones RPG prototype featuring all the grindy tasks you dislike doing, but none of the appeal of a well-written tale to encourage your cooperation.