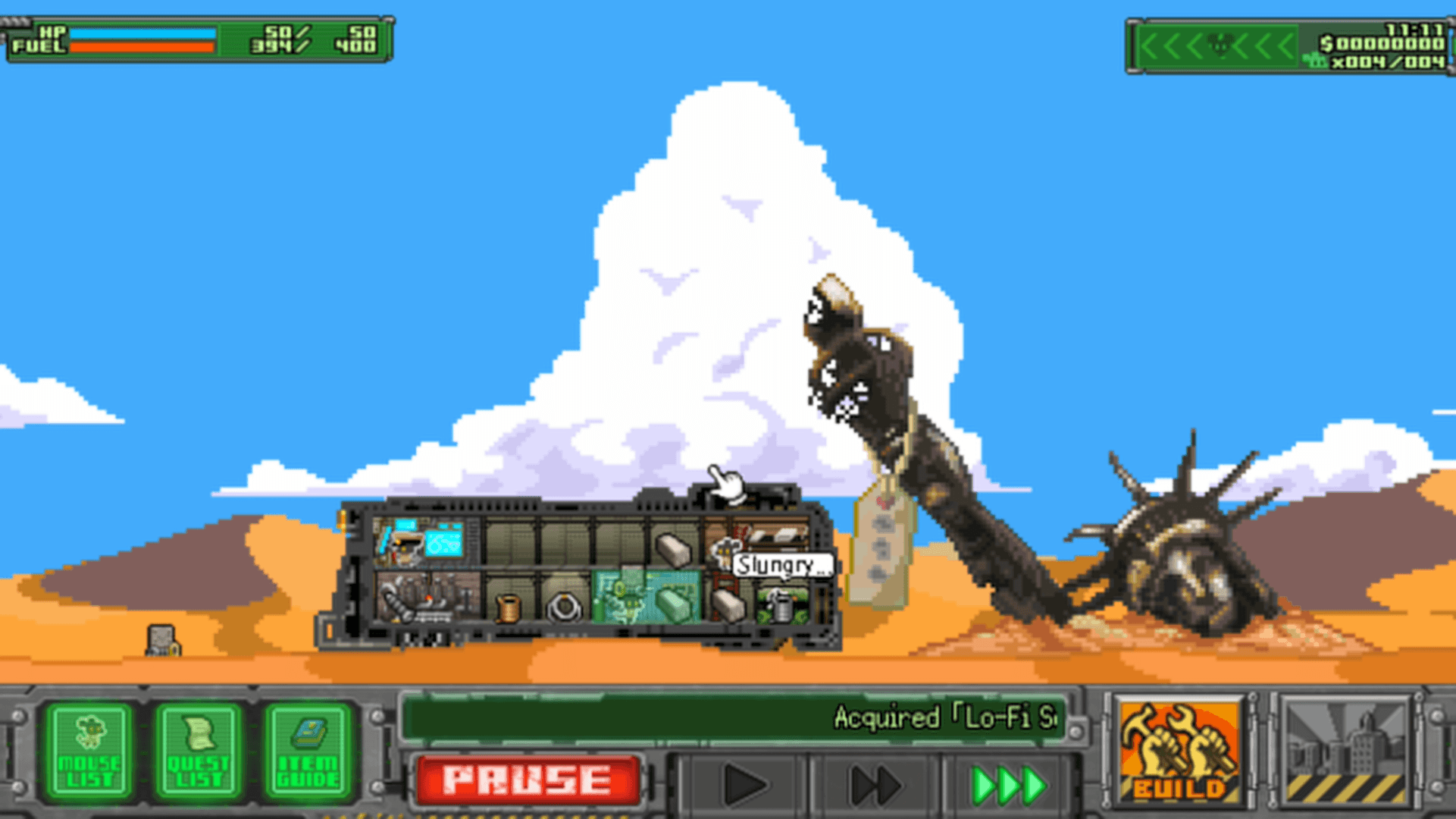 Originally released on the 3DS in 2017, Of Mice and Sand –Revised- is the Switch remaster that strives to offer a more complete package. The original ended all too suddenly and was lacking in length and versatility. Developed and published by Arc System Works, this new edition adds new events, maps and enemies as well as having increased resolution for the bigger screen.

You start off with a small rust bucket of a ship and two mice to help you run it. First you learn how to build a workbench, a ladder, storage, beds, an engine and a deck. It all comes across as quite easy-going but it quickly illuminates the many ways the game will try to kill you, be it starvation, exhaustion, running out of fuel or being swallowed whole by sand worms.

Immediately you’re forced into tutorials, which makes sense since the game is quite complex. Further tips and tutorials can be bought from the many towns and settlements in the game, but most of the tips either felt like a waste of money, telling you obvious things, or were important enough they shouldn’t have been put behind an in-game pay wall.

The story is simple; you must guide the mice to El Dorado. Don’t be deceived, the interest comes in the odd setting of the game – a desert full of space junk and destroyed alien ships, with a theme heavily reliant on the American Western genre. One of the first random events I came across was three giant mice having a shootout, I had to decide which of the three would win (I got it wrong). This has obvious links to the classic western ‘The Good, The Bad and The Ugly’, with the 3 mice wearing clothes reminiscent of the characters from the movie.

There are also pre-planned events such as coming across a signal in the desert which leads to a monolith (think Space Odyssey or Dead Space) that grants you wishes in exchange for a mouse’s life. Another event is an alien who wants to trade bigger ships with you for cash. Although portrayed as optional, if you want to progress in the game some of the events are actually compulsory 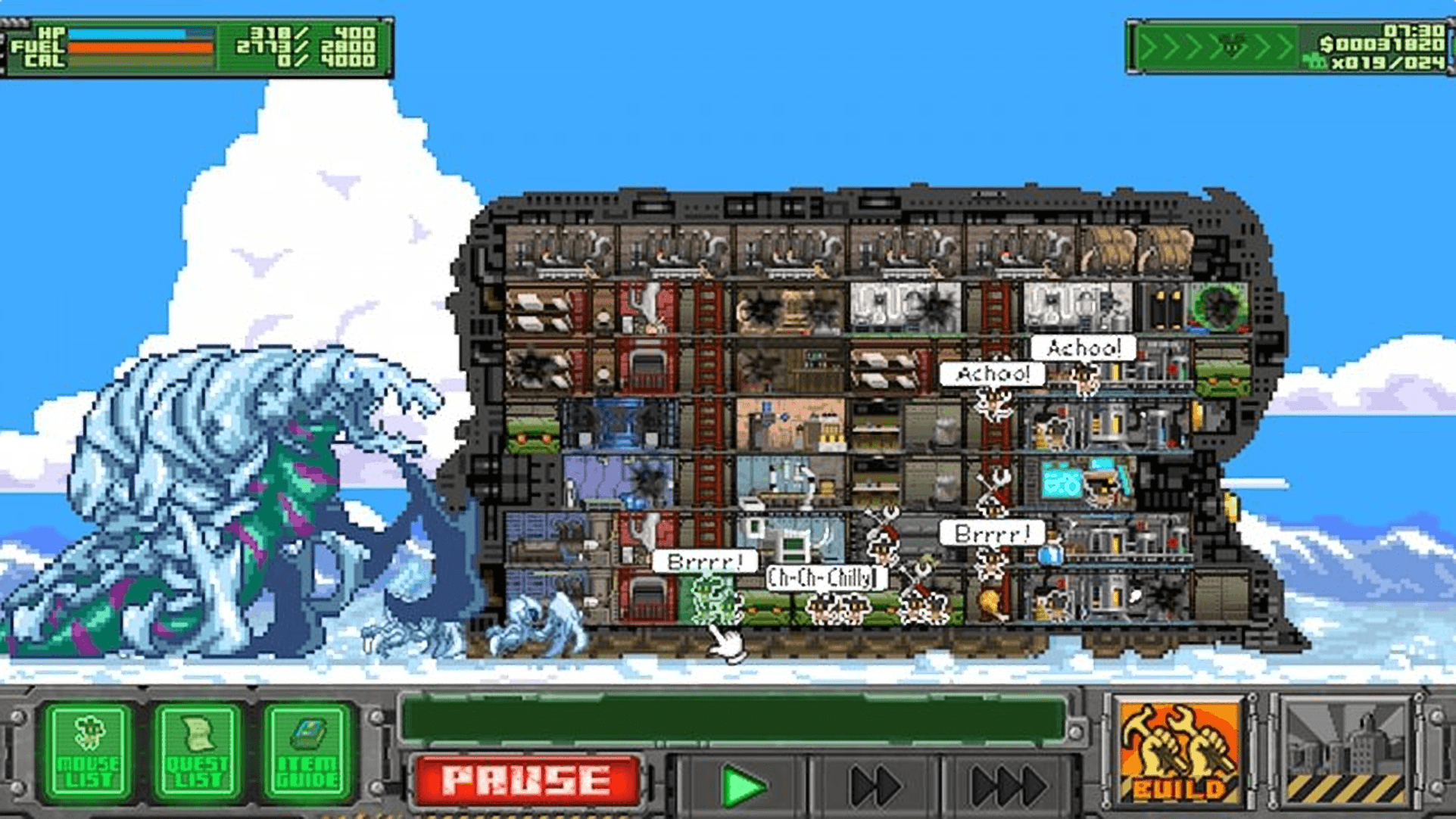 Gameplay is very resource management heavy and can bog down the first couple of hours as you learn all the different items you can craft and how much of each you need to have on you at all times. I basically just made items, found junk to make more items, travelled between settlements completing quests that involved having so many of a type of item in my inventory, and then using money to buy fuel so I can collect more stuff to sell to make more items. But as the game goes on you unlock more rooms for your ship which adds flavour to the gameplay. Not that long in you unlock a turret so you can take part in combat, but that is a very hands-off part of the game, with the mice doing all the hard work.

Buying a bigger ship allows you to progress in the game and gives you more space to build rooms and make items etc. It is also an opportunity to rearrange where your rooms are, the only other way to do this is to disassemble and reassemble which takes time. At the start I didn’t really know what each room did so I ended up with a rather uninspiring and unproductive setup so it was nice to be given an opportunity to put in some more thought into your ships rooms. However by the time I purchased my third ship I was fed up by the notion of reconstructing everything again. Yes you get all of the resources you used to make rooms back, but somehow the glass I had been given in a tutorial for a medical bay didn’t make it back into my inventory (I might have used it without knowing) and I didn’t know where I could get more.

Story elements are slowly fed to you to keep interest up, but not enough to keep you hooked and even then the main goal of El Dorado isn’t particularly interesting.

Fights are also simple, they play out by your mice manning the turrets and shooting the attacking monsters, while they attack your hull and leave holes which can be fixed with repair packs. You can build more turrets and stock them with different types of ammunition.

The interface didn’t feel very user-friendly. Being a strategy game it made sense to make the game more geared to touch screen, but the Switch is too cumbersome to make full use of this. It is definitely not a game that was made for using the joy-con controllers, swapping from the ship and the menu bar requires a button press and with a game that can require lots of inputs and quick changes I often found myself having to back out when I went to the wrong menu. 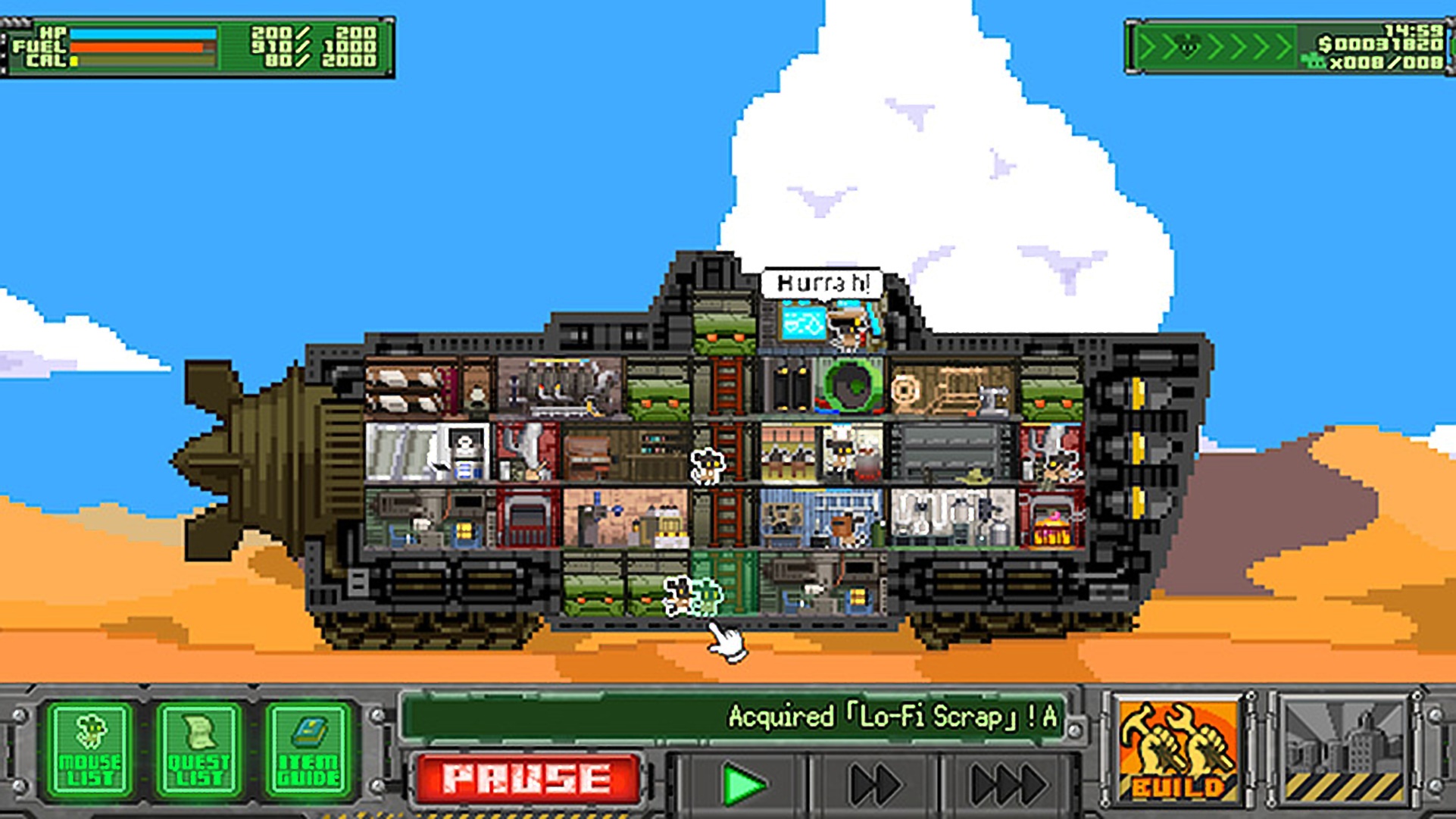 At first I found the music very enjoyable and it captures the style of Westerns well, but each area has one song played on a loop, combat provides a different track but I didn’t unlock a turret until almost 2 hours in so I spent over an hour listening to the same song.

The game reveals at the very beginning what you will spend most of your time doing, it recommends you ‘ABQ’- always be questing. This is one of the issues with the game. It tells you that selling items isn’t very useful and you’re better off giving items in for quests as you’ll get more money in return, but quests come in the form of fetch-quests, going back and forth between places making items to hand in. There’s even a line of dialogue in the tutorial that gives away the circular nature of the game “as your game progresses, you’ll be able to craft more items, which will allow you to complete more quests! Yeahhhhh!”.

I didn’t find the story or setting convincing enough to take the time to learn the ins and outs of the gameplay, which is a requirement for resource management strategy games. There’s definitely a level of complexity so for those interested in this genre there is enough to keep you playing for hours, even revisiting it further down the line. Newcomers to the genre will probably either be put off by the amount you need to learn and remember to be successful, or will become bored with completing menial tasks.