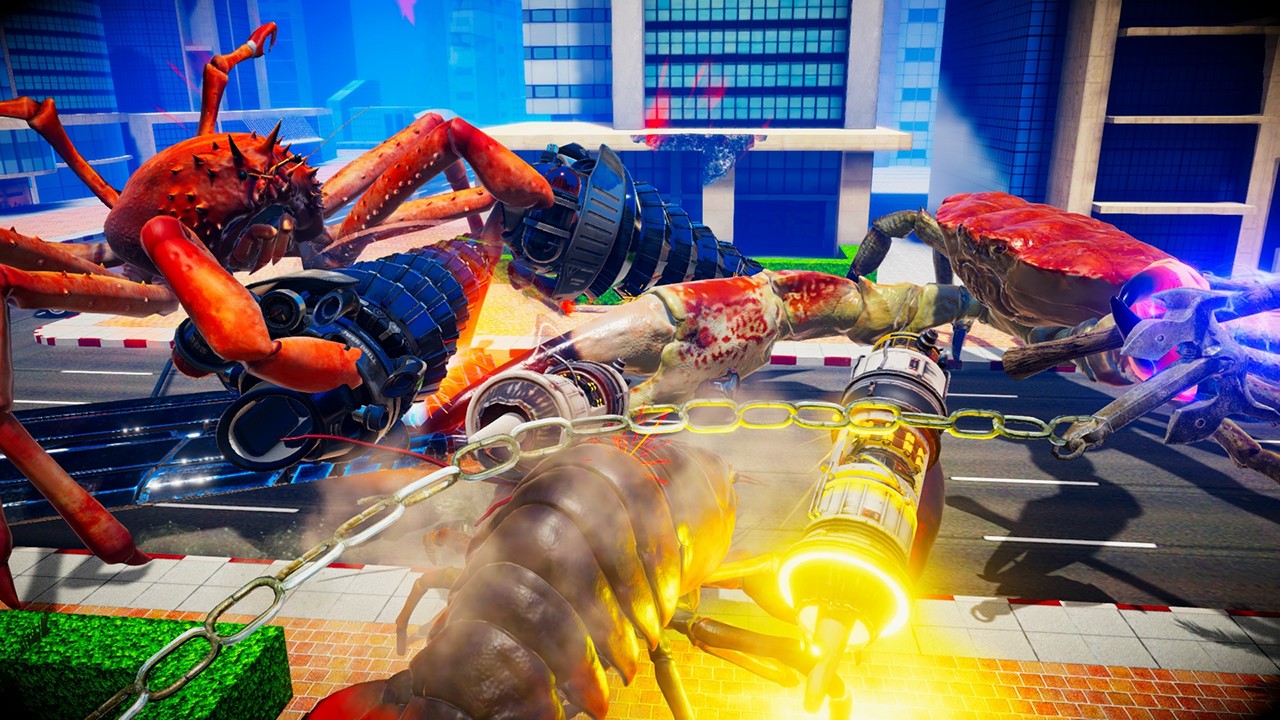 Of all the game series I’ve ever tried to follow, the creations of Nussoft (which now goes by Calappa Games) is one of the wildest rides I’ve ever been on, and had the distinct privilege of following since day one. My former boss is actually an actor(?) in the commercial for the first of Calappa Games’ titles, Neo Aquarium. One of the strangest and most interesting attempts at a combat game I’ve seen in my life, I was mesmerized by the way the battlefield unfolded, and also about the untold destruction you could wreck as an anemone. Then I had a hand in the localization and debugging of Ace of Seafood, which took the sealife combat model and turned it into a squad-based tactical shooter underwater. It was a frustrating but exhilarating experience, complete with trying to break the game by seeing how high a crab could climb a mountain that was clearly not intended for exploration. Now, finally, Calappa Games has returned to its roots going back into the combat arena, but leaning into the memes and insane nature of what gaming demands. I’m pleased to say that the latest game, Fight Crab, is, hands down, their best title to date.

With Fight Crab, the preamble and smokescreen are finally gone. In previous titles, Calappa Games has attempted to inject some variation of post-apocalyptic reasoning as to why things are the way they are. Humanity is basically extinct, the ocean has taken back the world, fish are at monstrous proportions, etc. etc. None of that is here. This game is about a crab, fighting another crab to the death. And by death, I mean flipping the other crustacean onto their backs. The game has a very generalized approach to the method: at first, you have your claws and that’s it. Using the two joysticks to independently aim your two pinchers, you can do a striking move, you can block, or you can do a sort of gripping/taser attack that does relatively light damage but ultimately cannot be blocked. Like a real crab fight (what did I just type), you might get lucky and nail a punch to send your opponent onto their backs in a matter of seconds, leaving them to flail back to upright with only three seconds on the count clock. However, with damage represented in a percentile fashion, it’s safe to assume it’s much more difficult to recover when you’re at 131% damage versus 22%. It’s a numbers game, plain and simple. 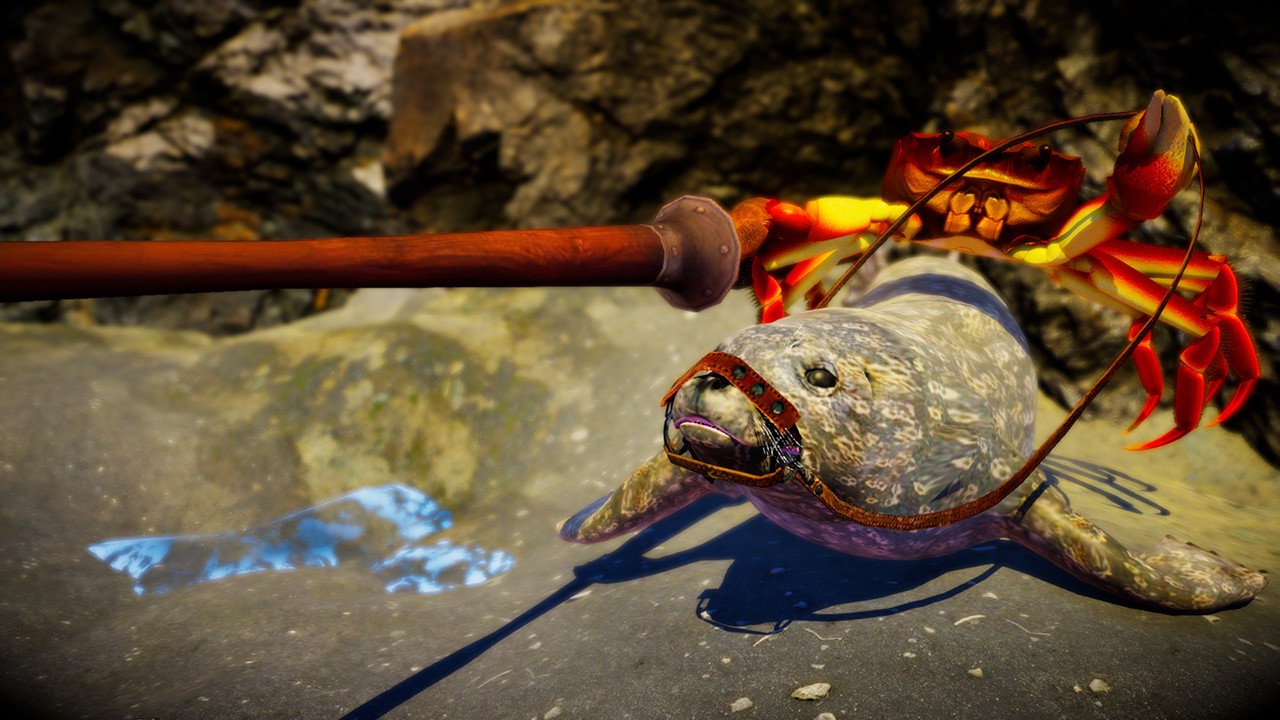 If that’s all Fight Crab was, I’d still say it was an excellent game. Calappa Games have always had a good eye for designing aquatic avatars, and their skill has only increased as time has gone on. The starter, the snow crab, looks and feels as authentic and bonafide as you could imagine a video game could represent. The more fights you win, the more avatars you can potentially unlock, gifting you a total of twenty-three variants of undersea muscle. Be a lobster, be a coconut crab, be a hermit crab…each crab has different stat advantages that can balance versus other types. Some crabs have the weight advantage, giving them better gravity to avoid easy flips, while others have sharper speed and turning, great for pivoting and trying to reposition the angle of attack. Winning gives you a currency that can be spent (amongst other things) on “levelling up,” where you can dump points into stats and craft the crabzerker of your dreams. Hey, there are only so many ways to type “crab” before you gotta get creative.

But speaking of creative, that’s what helps elevate Fight Crab from “interesting oddity” to “intensely exciting game.” Along with new crabs and stat boosts, you can buy weapons, and then the game goes totally off the rails. I don’t mean the kind of weapons that you would expect a crab to find, like maybe a piece of seashell or a broken bottle or something like that. It’s like a frigging crab warfare, and it’s amazing. You start off by being able to buy weapons like a crowbar, a butterfly sword or even a shuriken (because your aim is so damn awesome), and it just gets wilder from there. Guns are a thing. A crab holding a pistol is something you need to contend with. A lobster with jetpacks on his claws to have rocket-powered punches and also to give speed and afterburner damage. One of the greatest moments in gaming history has to be fighting on top of a table in a Chinese food restaurant only to have a bowl descent from the ceiling, split open, and inside is a crab with two sets of nunchucks. The physics of the whole ordeal are incredible to see, and it actually works out shockingly well. The crab that wants to wield the polearm will have distance and reach, but the swings will be slow and useless in close quarters. That chainsaw looks sweet as hell and it is, but the disadvantage of occasionally feeling out of control with your weapon are high, and you can quickly leave your side exposed for someone to wail on you with an oriental fan. The weapons are what people are here to see, and they do not disappoint.

Moreover, the logistics and controls of the game are handled really well, a first for Calappa Games. Whereas Neo Aquarium and Ace of Seafood both left me feeling wildly out of control. The crabs respond so well, moving and flanking with quick, responsive pushes of the button. You can right yourself if you flip (as long as you’re fast) and you’re able to discard and pick up weapons as quickly as your enemies drop them. There’s nothing like hurling your crowbar across the screen and grabbing a chair (because sometimes you fight in a medieval dining hall, DUH) before smashing it over your opponents head, not giving them enough time to really wind up with the morning star they’re carrying. Sometimes the AI can be a tad easy, but that’s just due to the inherent nature of a crab: very optimistic, not always forward-thinking. I expected this game to entertain me for a handful of minutes and then call it a day, but I was compelled to do better, to try to unlock more and see what else I could do because it has legitimacy. There’s skill and strategy in choosing a crustacean and figuring out how to maximize your damage and your efficiency. Plus, the soundtrack is great (though nothing beats the title song). 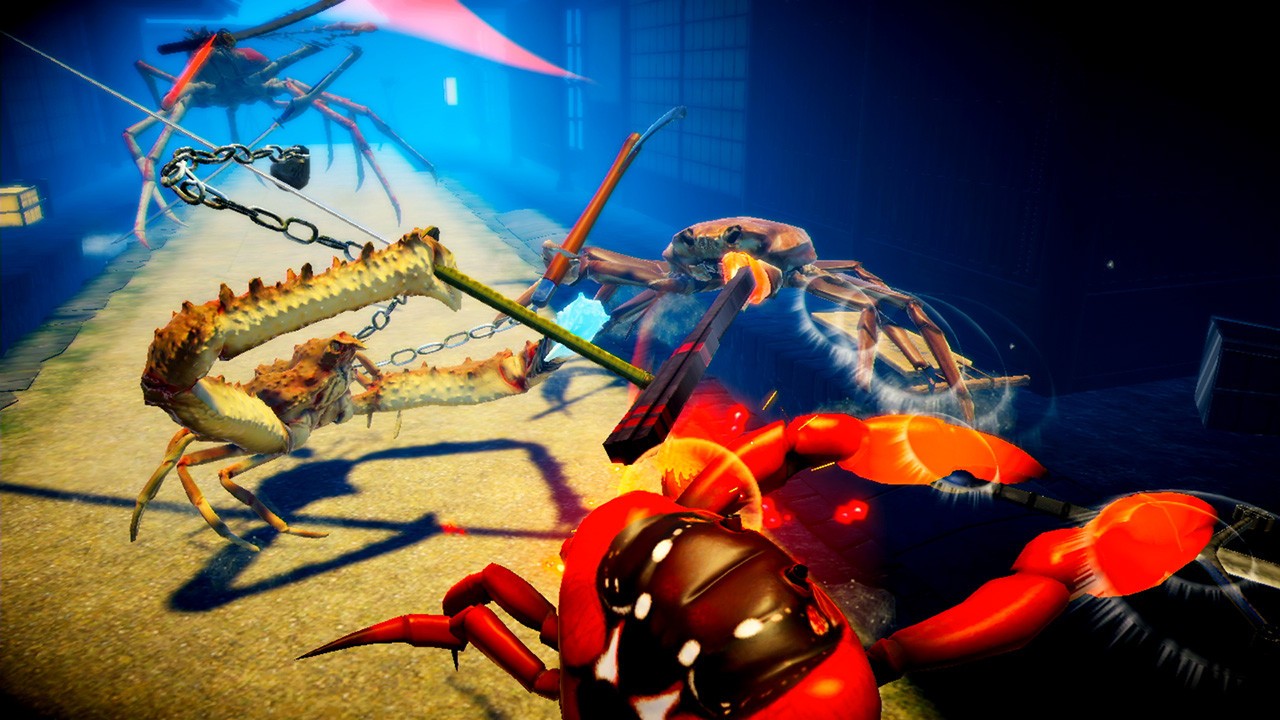 The only downside is that it seems like the game has already lost a bit of the spotlight appeal. Fight Crab allows for cross-platform combat, which is incredible. But, despite multiple attempts, I wasn’t able to match up with anyone online, either on the Switch or on other consoles. It’s really cool to allow matchmaking based on either the same device or all devices, and I’m sincere in wishing more people dive into this because, hell, it’s pretty fun and stupid, but it’s actually challenging and enjoyable.

Come for the memes and the jokes, stay for the actual fighting, whatever it takes, just get in here. Fight Crab is an amazing game on its own, and, as someone who’s watched the evolution that these developers have undergone, it’s even stronger. They’ve kept to their principles and values and elevated them to a degree where the skill and passion is undeniable. Like a Christmas Red Crab wielding a revolver, this game demands your attention, no matter how odd it may be, and it shows that everyone’s dreams are possible with the right attitude.

Like all great developers, Calappa Games took some weirdness, added a secret sauce of violence, made it weirder and, somehow, created a truly memorable fighter.