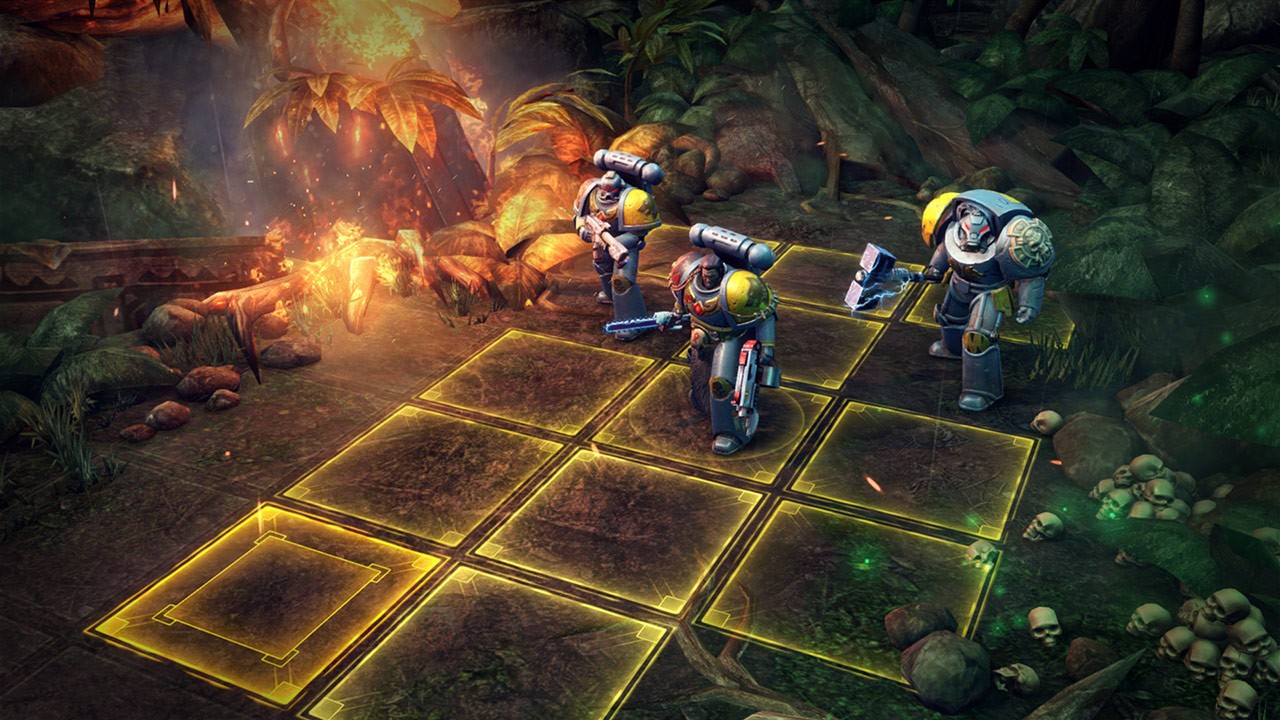 The Warhammer series is one of the first that comes to my mind when thinking of a tactical game with shooting elements. I’m not an expert of the franchise, but I can say that the PSP Warhammer 40,000 Squad Command game was one of my favourite titles on the Sony handheld console, both for its absolutely well-done and fluid gameplay and its online PvP that worked incredibly well. I also recently played a series release called Warhammer 40.000: Mechanicus, which brought a little dignity and, mainly identity – because of its unique futuristic style – to the Warhammer series, while failing in several aspects.

Speaking specifically of this one, Warhammer 40,000: Space Wolf recently came to Switch after a long time since its free-to-play release originally on mobile platforms (2014). Along with the port, some aspects of its origins accompanied the move to the Nintendo console, including its need to be online all the time – which was later corrected through an update.

Warhammer 40,000: Space Wolf brings with it a tactical gameplay formula that resembles games in the XCOM series. The plot features Valgard Twice-Slain as the protagonist, a leader of the Space Wolf Squad who needs to fight the Chaos Space Marines after having his ship destroyed in a crash. Your main mission will be to escape with the survivors while facing hordes and more hordes of enemies – and traitors. 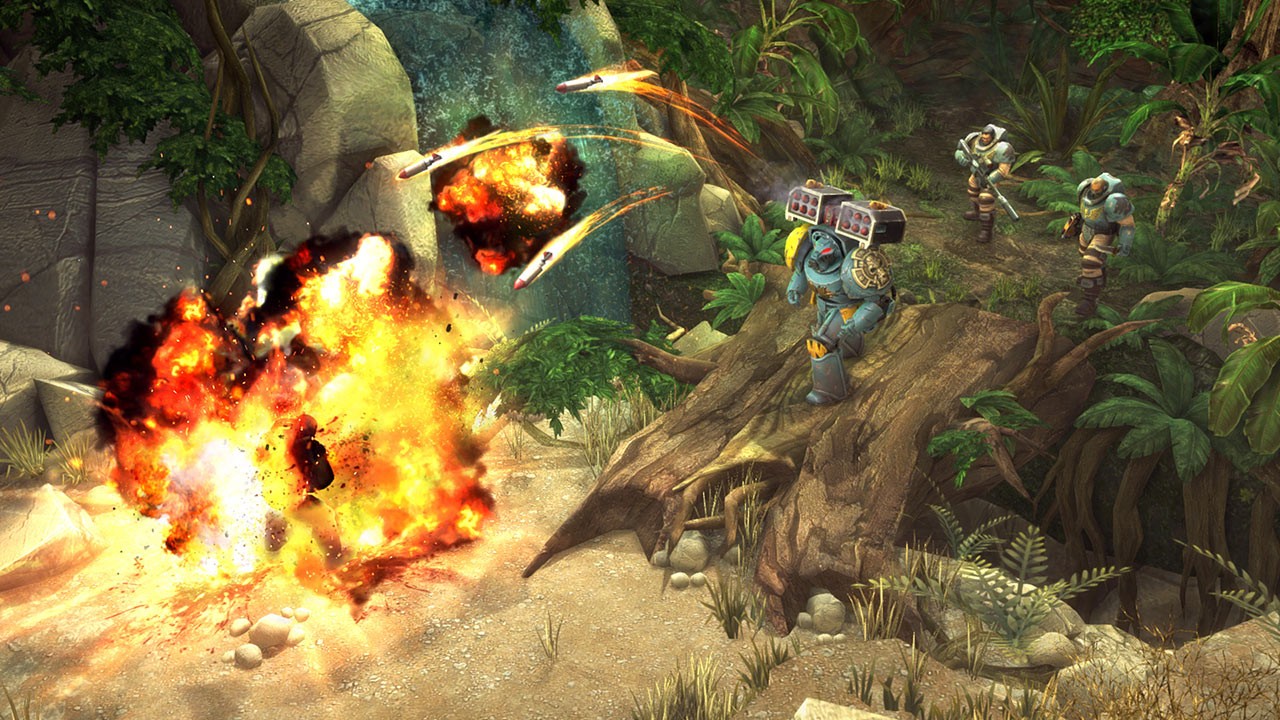 The way the gameplay works here comes down to walking in squares across the battlefield, known as a grid, using the characters of your troop, each with their own attributes, weapons, etc. The actions take place in the respective shifts, talking about the player and AI, following a sequence of characters who will make their movements.

However, Space Wolf looks at tactical strategy differently, and applies card game elements to its main gameplay. Each action is represented by a card where each character has a “hand” with all his cards available and two actions to perform. Most of these cards can be used to move the character, be it attack or passive action. It’s also possible to discard some of your hand, equip weapons that have consumable ammunition, use healing cards, among other actions. Offensive action cards also have attack points and hit percentage, something necessary to create your strategy. Fortunately, when I felt that the actions were happening at a very slow pace, I found a very hidden option that speeds the game up to 2x.

Between one mission and another, at the HQ there is a section to improve certain attributes – with points acquired within missions – of soldiers through perks, which are nothing more than a kind of skill that adds a passive effect to the character. We can also create a deck of cards for your collection and use them in battles. Such cards that are acquired at the end of a mission after a victory is won or else through the forge using in-game currency. 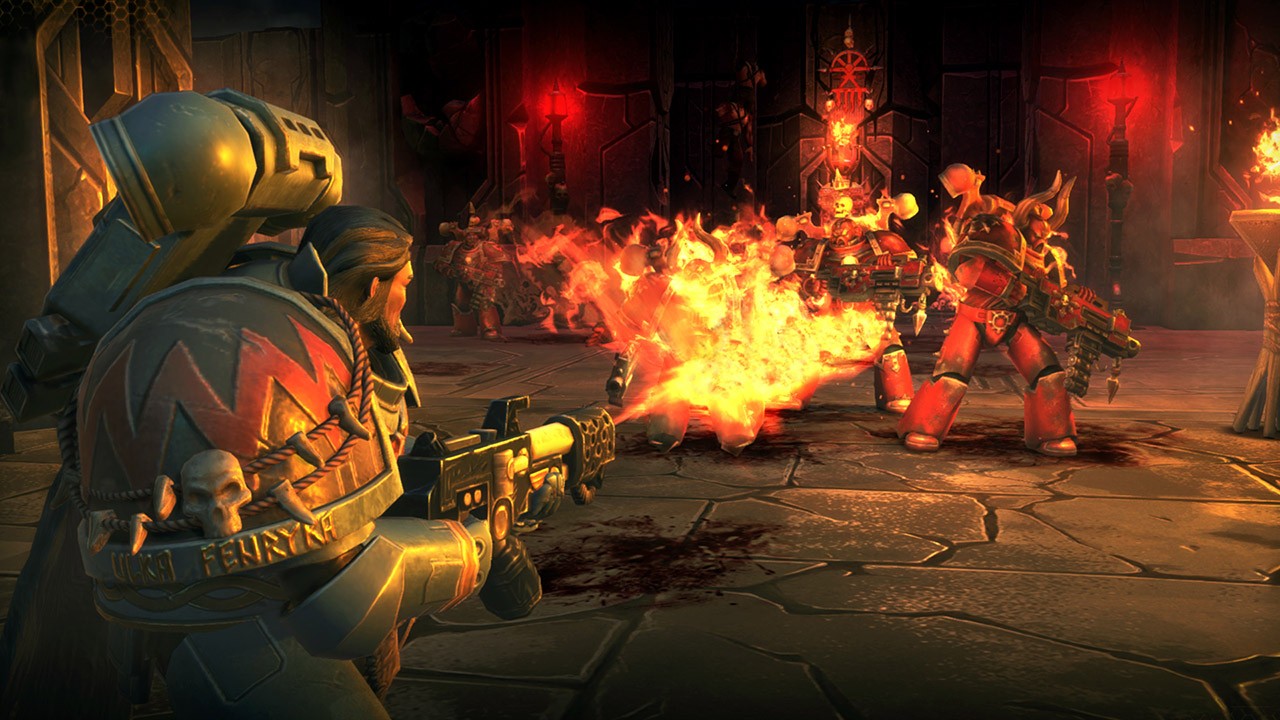 When it comes to the flaws, the game fails to only have a command that ends the player’s complete turn. For instance, you cannot make the strategy of using only one move by one of your characters. There is no way to end a turn for an individual soldier, but only for the entire team. This disrupts the gameplay entirely, and practically breaks the game when any of your characters have empty hands: the turn must be ended, since it is not possible to perform an action.

There is also no cover system, which makes battles turn into a full crossfire with the impossibility of avoiding damage if an enemy is close to your character. This undermines the purpose of cards with melee attacks, since you need to get close enough to use them and this will not always be effective enough. All this added to the fact that the enemy simply pops out of nowhere during several battles only irritates us even more, which made me feel constantly at a disadvantage. There are three levels of difficulty available, but the balance in all is simply inconsistent.

When it comes to the Switch port, there are performance drops at times when the camera approaches the attacking character and moments during the battle. The navigation between the user interface works extremely badly, giving the impression that there is even a serious input issue (it simply seems that the buttons don’t work sometimes), very hidden configuration options, among other problems. This is also reflected during battles, where the movement of the cursor is slow and often seems to not understand the pressed commands. After the completion of a move for any character, it will be necessary to choose the direction in which he will stand, which disables attacks in opposite directions and does not allow you to cancel the decision if you have regretted it – with the problem of registering inputs, it gets even worse.

Warhammer 40,000: Space Wolf isn’t exactly a bad game, but it fails in many ways. The port for Switch has serious input problems, as mentioned, and this ends up screwing up the fun in general. Something like that is just unacceptable. Fortunately, they removed the mandatory constant internet connection, which allows you to play offline at any time. The gameplay itself is cool and a lot of fun, although the story is very superficial. However, peaks of difficulty make the game unfair and frustrating at various times, and even the easiest difficulty available. If you are a fan of games like XCOM and thought you would find something similar in Space Wolf, it’s better to change your mind.

You’ll need to escape with your squad while facing hordes and more hordes of enemies – and traitors. But, be aware of the serious input issues and game design problems.