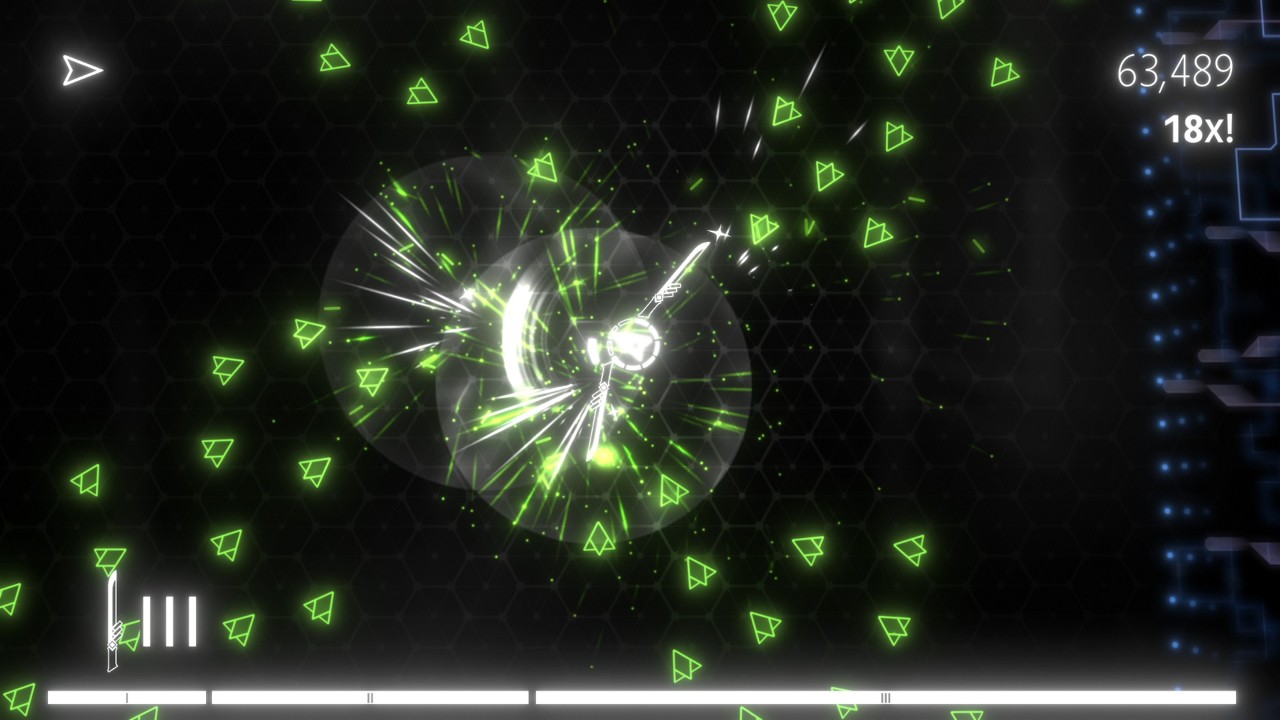 The Quantum Astrophysicists Guild, besides having a truly unique and memorable development name, has done a decent job of producing some interesting titles as well. I adored the port of The Bridge to the Switch, and Tumblestone was fairly fun, if somewhat repetitive and hamstrung by the lack of friends. So, when Breakpoint floated across the way, I figured I’d try it: the graphics were appealing, and the concept of a twin stick melee game was right up my alley. To its credit, I had a ton of fun with Breakpoint: the problem is; I had all that fun in about fifteen minutes.

Breakpoint is a minimalist geometry-based game, calling on ideas like Geometry Wars and other such simple, shape-based shooters to give ideas and design. You play the “main character” ship, and your goal is to survive as long as you can as wave after wave of shapes come for you. There are simple green kamikaze triangles, blue diamonds that shoot bullets, orange buzz saws that explode into shrapnel when dying, and all those other fun ideas. Unlike many games of this ilk, however, you need to let the enemies get nice and close: all the weapons are melee in nature, so range will not help you out at all. Instead, you’re given the special ability and meter for breaking, a term when your weapon suffers so much damage that it lets out a burst of energy upon murdering a certain number of enemies. This explosion can take out several other troops at once, even those that require over one hit, so trying to get the timing down for this meter is crucial. Additionally, if you’re lucky and fast, you can build up the explosion to a Max Charge, which will, effectively, clear the whole damn room. 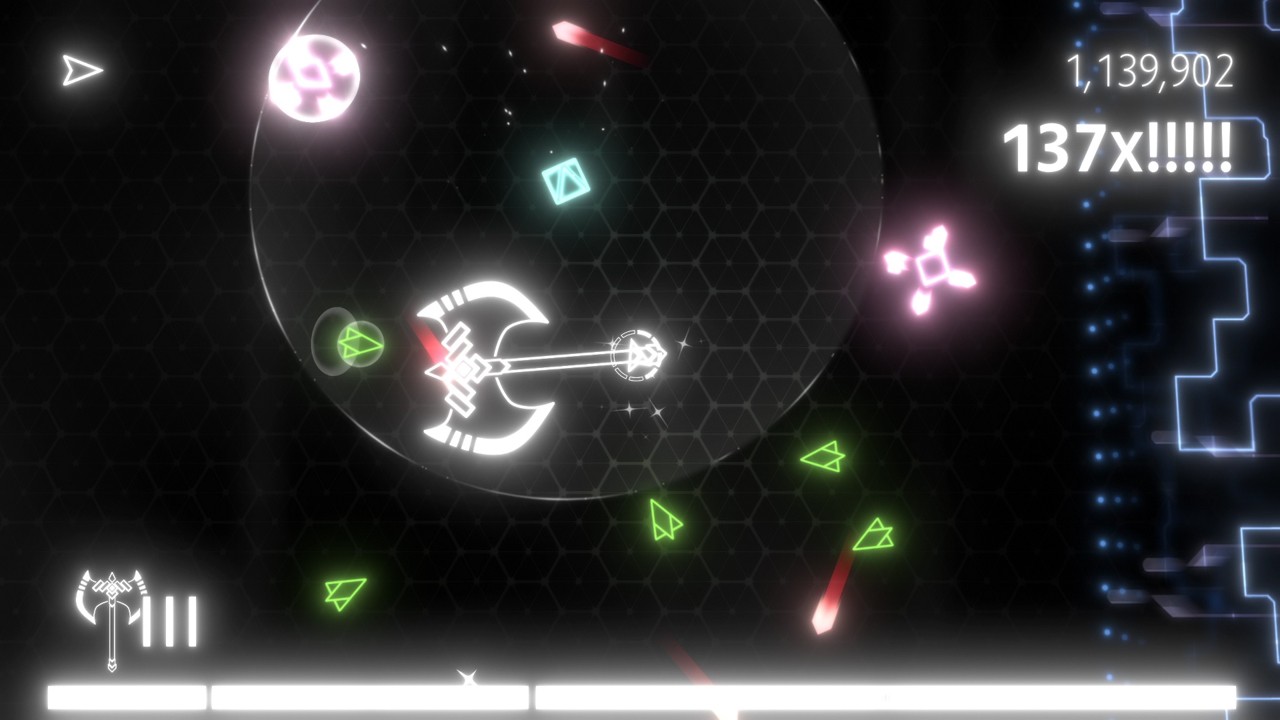 As little as there is to Breakpoint, I enjoyed multiple aspects of it. The way the game is made is solid and using the slow-motion effects for the Breaks help to effectively mask any frame drops that might occur within the game. There’s plenty of variety for the enemy types, and it helped to keep me on my toes. For the first few waves, the increase in difficulty is quite gradual, letting you get a feel for what is coming in terms of enemies, density and also what needs to be adjusted in play style. The green kamikazes, for example, can be taken out upwards of seven at a time (depending on your weapon), so that’s a pretty straightforward slaughter approach. Eventually, however, you encounter these blue shapes that make massive shield bubbles, and you need to destroy them first because everything within the bubble is invulnerable as long as they live. There’s a very conscientious craft happening here, and it elevates the game from merely an arcade experience to something more strategic and intoxicating.

Additionally, the weapon system of Breakpoint is genius. If you’re happy with the starter weapon and just want to go with it, by all means. Enemies will drop weapons occasionally, though, and you’d be remiss not to at least sample some of what there is to offer. For example, the hammer seems to have a wider swing radius with a slower strike, while the knife (sword?) has a small, tight and fast swing that can really clear the room when you’re backed into a corner. My personal favourite was the spear which had a double strike quality and, while it had the smallest strike zone, it felt crazy powerful when you got everything situated. Plus, the right weapon caters to your play abilities and allows you to build up the Break meter more effectively, and you definitely want to get that sweet Max Break. It looks fantastic, and it reaffirms your playability in the best way possible: by disintegrating everything on the screen beside you.

Last, the game’s clever self-immolation clause. Breakpoint gives you a limited number of lives, so don’t think you can live forever. By the same token, don’t think that the end is the end: sometimes a well-timed death can be beneficial. Getting touched by an enemy triggers a loss of life and a Break all your own, making you a weapon as much as you are a vessel. There were a few times that basically getting whacked was the best thing to happen to me because it allowed me to destroy a bunch of enemies that I couldn’t realistically reach before my Break Meter depleted, so I could maximize my own effectiveness without compromising my abilities. That’s not a permanent solution, mind you, but it’s a nice consolation prize to “you let them get too close, jackass.” Just don’t discount purposely hurting yourself in order to give yourself a better future. 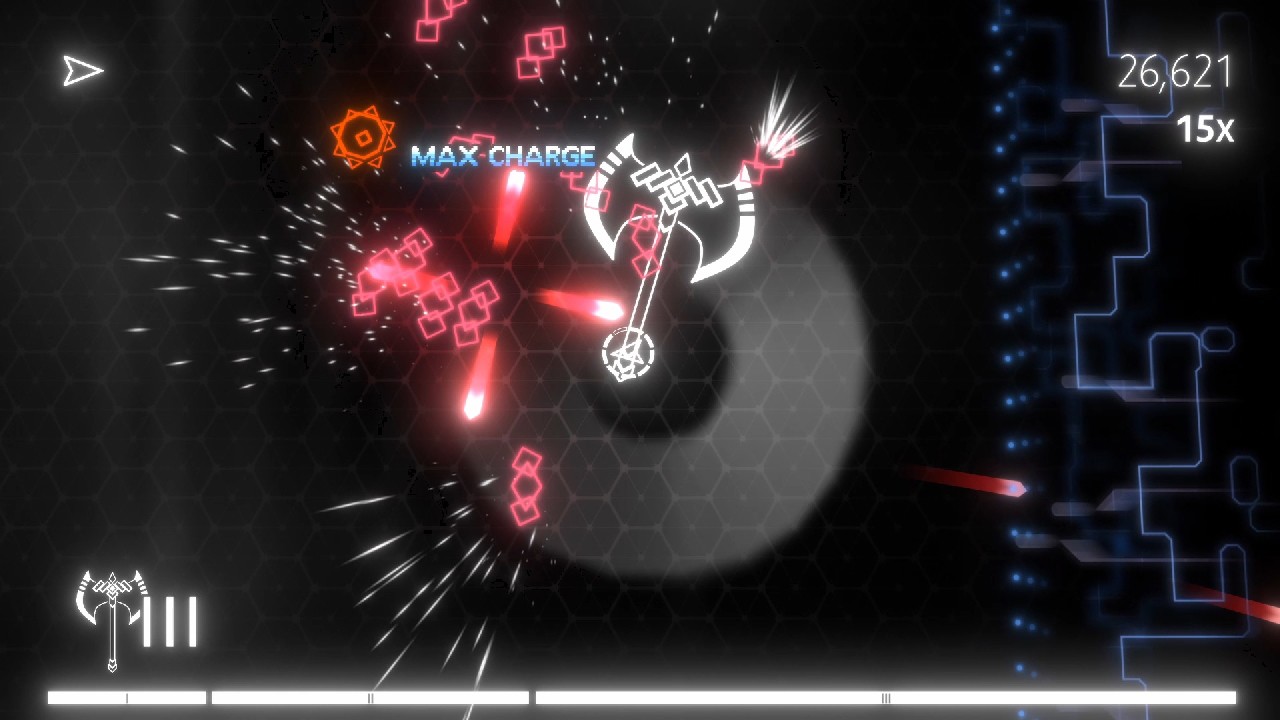 One could easily and successfully state that Breakpoint handles quite well. For more than a few twin stick titles, it can become arduous and tiresome on the thumbs and digits after prolonged play. After all, the mere nature of the games dictates that your hands need to be engaged at all times. Thanks to the way that we partition out movement, direction and action, however, you can usually catch a break and relax your appendages at least once a wave (at least until the game gets crazy intense). Handheld or docked, Breakpoint has zero issues in maintaining a strong play with no dip in quality or connection.

Even with a funky soundtrack and good controls, Breakpoint made its point about ten minutes in, and continued to do so for the next half hour or more. There’s not a lot to see here: it’s a well crafted and effective arcade experience, but it really is quite arcade. There’s an online Leaderboard, you can view the credits, and that’s all there is to say. Don’t get me wrong, I’m not crapping on it, but I was hoping for more. Maybe more weapon choice at the beginning or something, yet it’s all alright. Breakpoint is a great distraction and definitely fun to fire up for a few minutes at a time between other activities or even just to grind out while watching a movie or television. If you’re a fan of shapes going kaboom, this is one of the best kabooms that money can buy.

Breakpoint is fast, fun and frantic, offering plenty of arcade challenge to single players who love twinstick mayhem: just be aware there’s nothing beneath.