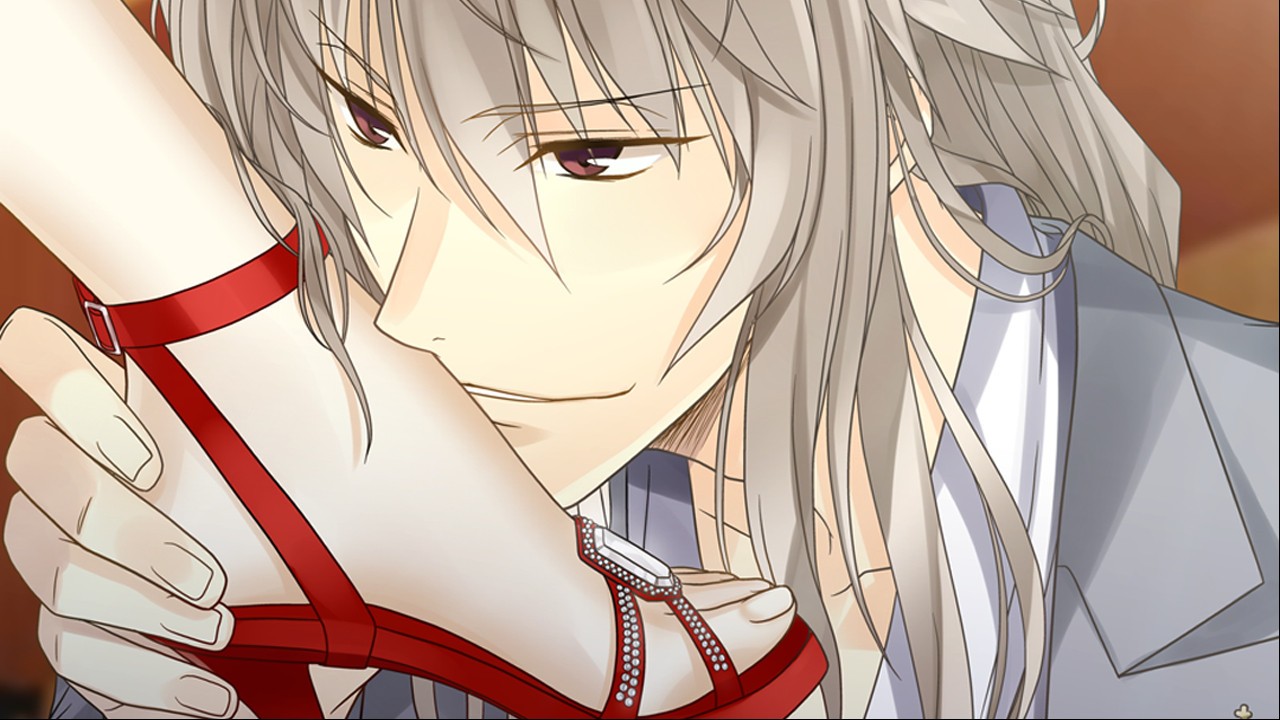 I think Dogenzaka Labs have done that thing where they went so far around the corner they came back from behind. When I last played one of their titles, I was so thoroughly disgusted that I thought I would never try one of their titles again. Office Lovers was misogynistic, tactless and full of empty, poorly written pathways that lead to superficial relationships. When I heard about their newest title and the premise, I was, initially, outraged. I couldn’t believe they would find a way to sink even lower in terms of storylines and ideas. I didn’t want to play it. But there was something there that made me curious. I had to see if it was as bad as I thought it would be. Much to my utter amazement, it was somehow worse, and, by this factor, it actually made the whole thing significantly better. Don’t understand? Read on, it comes together.

Secrets of Me is about a modest woman who is engaged to a playboy who, for some reason, just won’t commit. She decides the obvious solution is to get plastic surgery, because she must be too ugly for him to finally settle down. As she’s coming out of recovery, she runs into a private detective who says he’ll teach her how to stalk men, because that’s a skill everyone is missing in their lives. She does and finds out that her fiancee was just hanging on to get all her money, and he’s pretty pissed that she spent so much of it on plastic surgery. Heartbroken but now equipped with a smoking body, she does the only natural thing left: pursue other men by stalking them and finding out what makes them tick. From a soft-hearted CEO to a frigid romance novelist, from an egotistical male model to the very private dick who taught you how to do the stalking, you’re off on romantic endeavours that are, frankly, very unsavoury, but somehow justifiable. I mean, in a really messed up way, but still.

With Secrets of Me, you get the Dogenzaka Labs treatment of what an otome game is in their minds. You have five dudes to choose from. Each one is several chapters long and never intersects with the others (not in the traditional means). After you manage to beat the game by getting the Best Ending, you then unlock a sequel chapter where you see how everyone fares in a post-stalking world, as well as a date chapter to watch you and your new beau interact on a date of some kind. Both the sequels and the dates might be better under the right circumstance, but, compared to the main game, they are completely static and “kinetic,” so there’re no choices, only reading. Also, the dates and the sequels aren’t really that different from each other: the sequel only confirms in greater detail why you were definitely the right girl for your dude, and the date shows a sort of inconsequential venture out, but there’s never anything magical or mysterious revealed therein. Instead, you just get a snapshot that’s probably fantastic if you’re head over heels for your imaginary boyfriend, but is a pretty standard, sanitized read for those of us who aren’t into anime dudes. 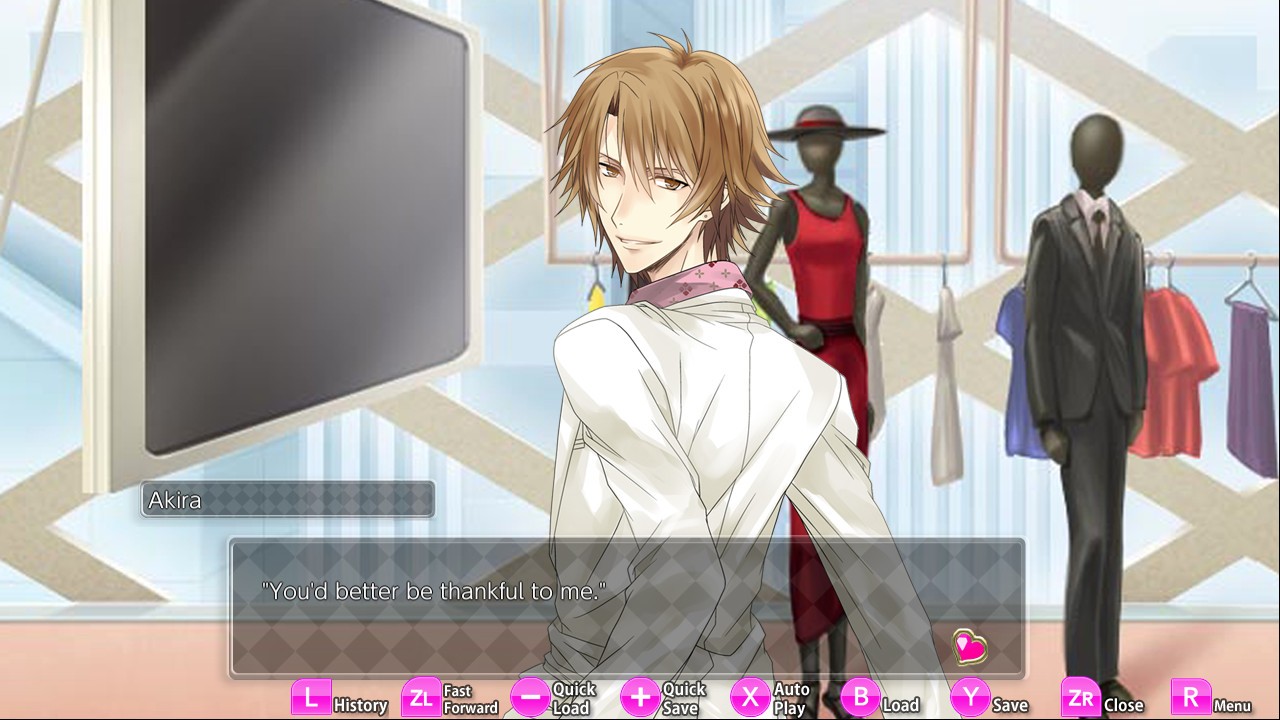 Let’s get a few of the major points out of the way right away. Firstly, there’s no voice acting, and the soundscape is pretty standard ambient music that feels like it was lifted right out of a soap opera. You’ve got jaunty, upbeat music for walking, slow jazzless-jazz during romantic moments and some ominous, foreboding times when the going gets tough or you might get caught. There’s no sex, at least not on camera or in text, but there’s plenty of incredibly close encounters, and, at least for one of the dudes, a lot of smash cuts to the next morning. I’m pretty sure I banged the CEO a few times before we admitted that we loved each other, but I honestly might have been pushing along that story a bit faster at that point. It’s not a bad experience, certainly, but it lacks a big presence compared to most other visual novels or dating sims on the Switch. In that same vein, though, this is significantly less expensive than those other titles, so you get what you pay for.

As an experiment, I did do one path of Secrets of Me without reading it whatsoever, putting it on fast forward and just making choices when they appeared. This was mostly to prove my intuition, which was to just make choices that seemed appropriate based on what the blurb about the potential mate said when choosing it. For example, since the plastic surgeon is calm and gentle with a sense of humour, I figured picking options that were more modest and reserved but still loving made sense. The result of firing wildly without knowing what the preamble was got me a 64% affection rating and the Best Ending, which I had to jump back and watch again. Dogenzaka Labs doesn’t want to make a serious challenge for the men and women playing these games: they want to sell happy endings and unique, interesting encounters. This isn’t really a complaint, but it’s more of an observation. These are the otome games for people not looking for a sincere challenge, but the illusion of one. We want to pretend that we won over the dudes of our dreams by stalking the shit out of them and breaking up their existing relationships in order to get it right.

There it is. There’s the banana pancakes element of Secrets of Me that makes it so insane that it somehow works. It’s not enough that your main character dumped a ton of money into plastic surgery to make herself hot. It’s not enough that she ran into a dude who taught you how to stalk other dudes for the specific purpose of finding out more about men and hopefully winning them. It’s the fact that every single person you pursue is actively in a relationship with someone else when you take an interest and then you have to passively aggressively break them up. I don’t know what the hell is going on in the world right now, but it seems like infidelity is the most common plot twist to throw into everything from serious crime dramas to teen romance books. Hell, your character only finds out about her con artist boyfriend because she sees him with another girl, talking loudly about loving each other and what a fool you are. This should be a sign that the state of affairs of the world is totally messed up, and, theoretically, this game should be shelved as even worse trash than Office Lovers. 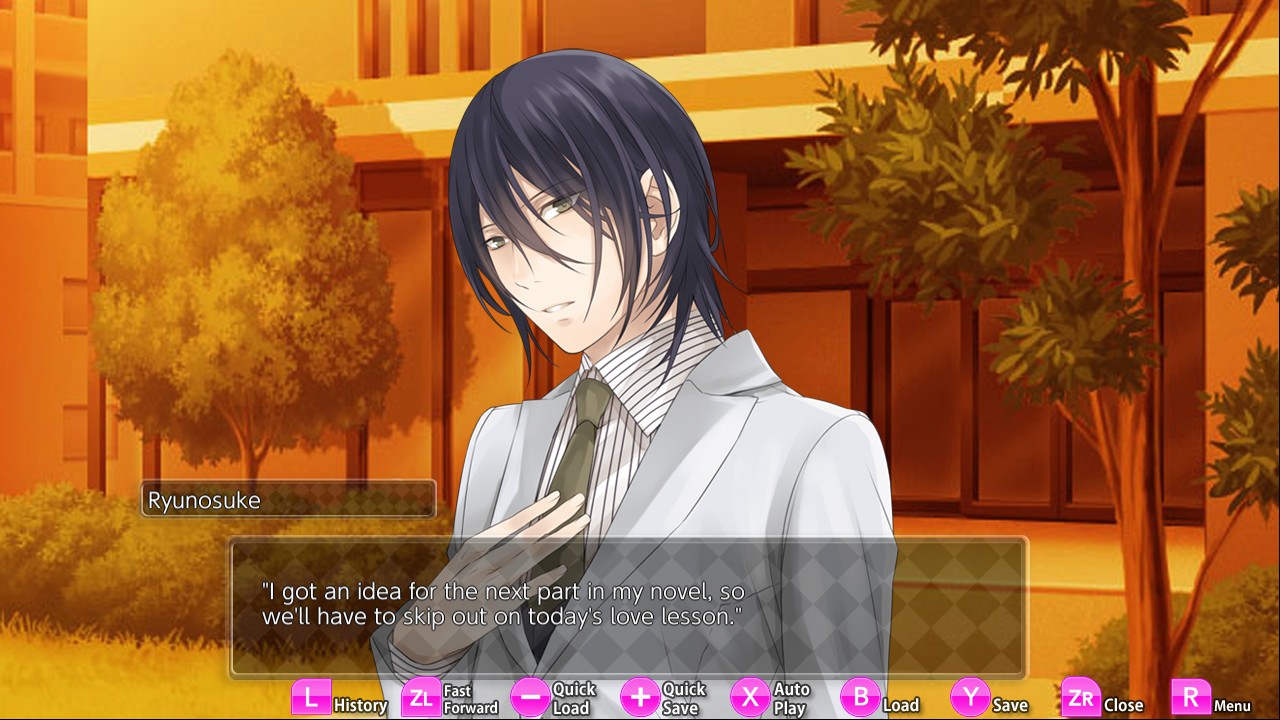 But it isn’t. Somehow, someway Secrets of Me takes this storyline idea and make it work with incredible effectiveness. Sometimes people are in abusive relationships with a woman who is making them feel terrible and they need to get away. Sometimes they’re “dating” an obsessed fan/stalker who might harm them if they don’t keep up the facade. Sometimes they even think they’re in a good relationship, but it turns out they are also being cheated on and you need to reveal this fact without being too heavy handed. Growing up in a time when cheating on anyone or wanting to break away from your relationship was a massive failure, this concept is both foreign but very, very interesting to me. I remember my friend’s parents just hating each other and only getting divorced when the kids moved out of the house. Why? Why would people do that to each other? Secrets of Me actually takes a shockingly candid look at the state of relationships of all walks that are present now and shows a bit of boldness by suggesting that the right path isn’t the one that you’re walking right now: it’s the one that you can start tomorrow.

Having said that, I won’t pretend that there aren’t plenty of creepy aspects to the game. I hate that stalking is such a liberally used term now that we toss it out for “keeping an eye on someone you like.” Then again, our protagonist literally stalks these dudes across multiple locations, and I think there needs to be a disclaimer that stalkers are the lowest form of life and actually stalking someone will get you shot or jailed in most locations. Yes, it’s a game, and you’re stalking pretty dudes who secretly want you to follow them (that revelation was made a couple of times), but I can’t shake the oddity of it all.

Still, Secrets of Me was far better written and executed than it had any right to be. It had some heart in the writing, the men actually seemed to care about the female protagonist, and it was engaging enough that I sat through all the storylines to see what I could see. It’s not even close to my favourite title, but it’s unique, and it can entertain you if you let it. Like a stalker from the shadows, Secrets of Me will creep upon you without giving itself away, and, before you know it, you’re totally hooked.

Secrets of Me Review

It’s bizarrely entrancing and refreshing in its honest approach to a twisted situation, and the idea does help carry what is sometimes a very flat narration.