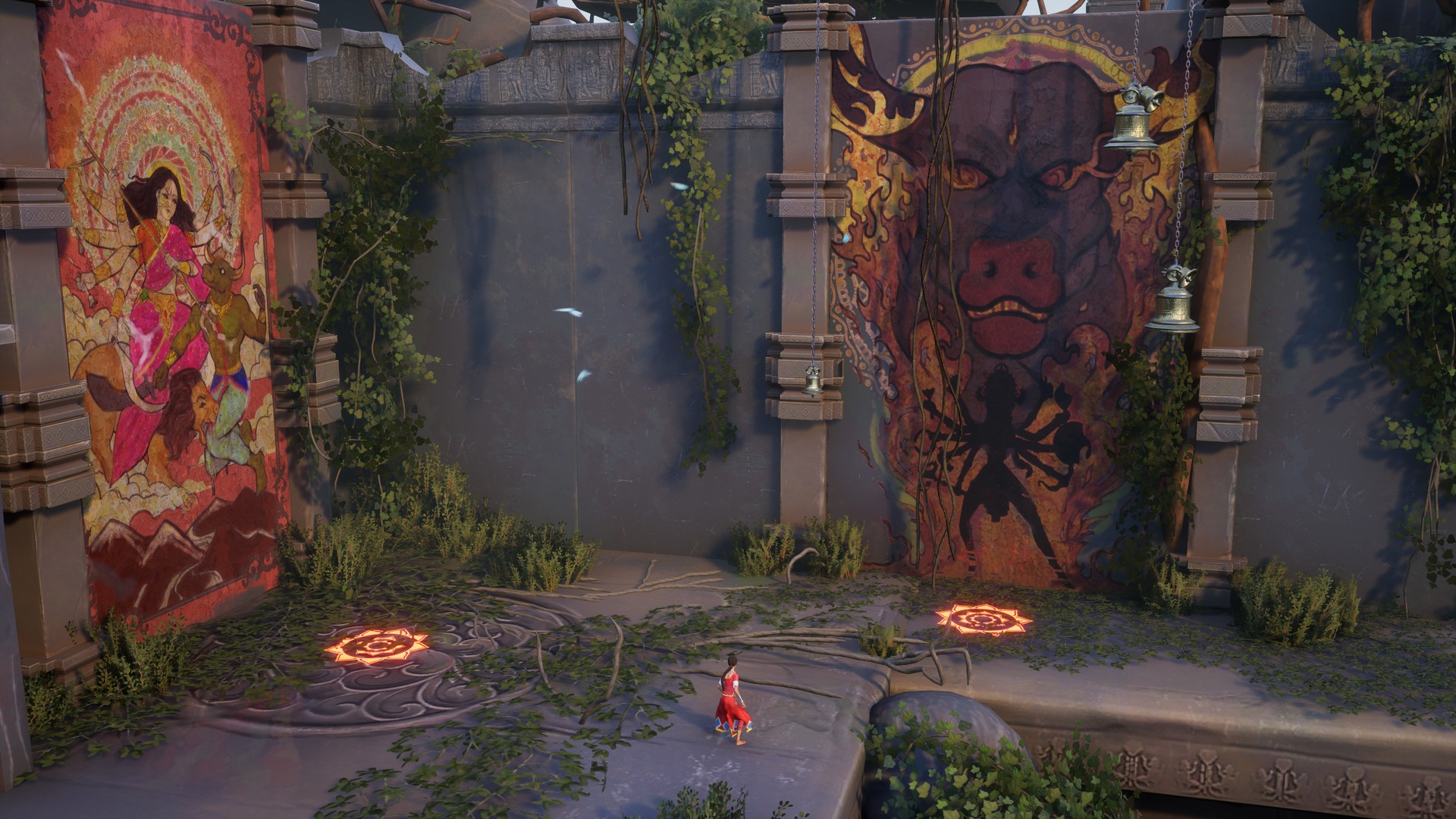 Raji: An Ancient Epic is a linear 3D action-adventure game set in Ancient India, when a girl named Raji is selected by the gods to help stop a demonic invasion, all the while also saving her brother who was captured by those very same demons. The gameplay centres around combat and some platforming. I say “some”, because it isn’t really the central focus of the game, although you’ll go through many short platforming segments as you make your way across its levels.

Raji’s journey starts when their town is attacked, and her brother, Golu, is kidnapped in the process by what appear to be demons, thus prompting Raji to follow them and rescue him. Throughout the game, Raji is aided by two deities, Durga and Vishnu, who seek to help her in defeating the demon army. As a consequence, you not only get to experience Raji’s journey from her perspective as you play her,  but you also often hear Durga and Vishnu discussing Raji’s journey, about how she has to, and will, overcome the obstacles that are presented to her.

The thing that struck me the most when I first saw this game was undoubtedly the visuals. The game kind of came out of nowhere for me, as we first crossed paths during the recent Steam Game Festival, where I had the chance to play a demo of Raji. In an instant, I was amazed by its world. The environments not only look great, but the game makes pretty good use of the fact that it’s 3D to convey the size of the world and its landscapes, and thus making me feel like a tiny insect exploring this vast ancient version of India.

Generally speaking, the game is pretty colourful, although in a few rare occasions this fact can be overshadowed by environments where the predominant element is stone or other things that, by nature, aren’t that eye-catching. With that said, the developers have done a good job with Raji’s red clothes, which heavily contrasts her within the environments that she finds herself in, even when you’re somewhere filled with popping colours. 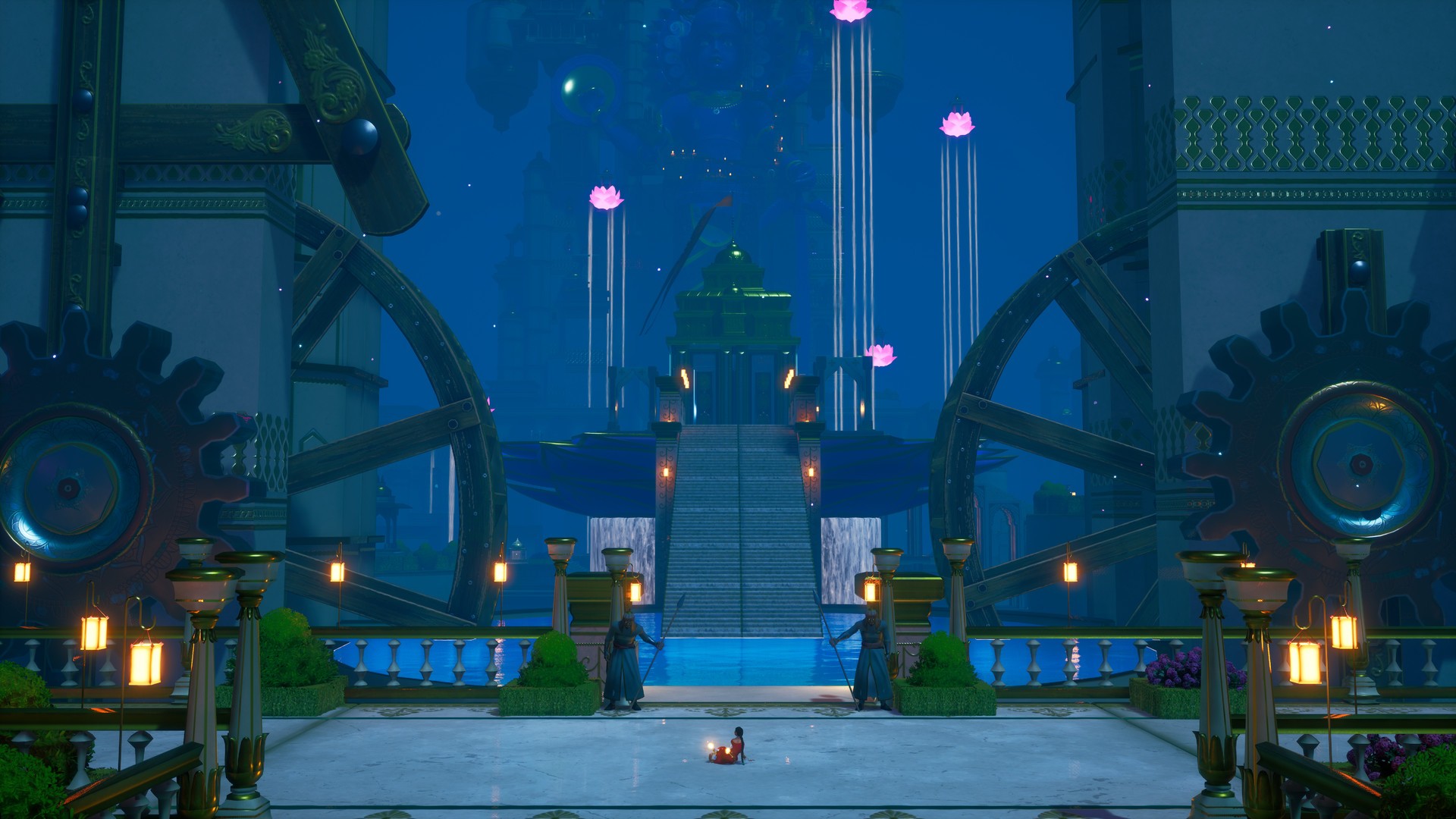 As someone who has never really been exposed to or experienced Indian mythology, culture or history, I can definitely say that Raji has got me interested in the subject. With that in mind, I’m sure that people who are more familiar with the matter will find plenty of references and be able to appreciate the story of Raji in a way that I probably couldn’t. Thankfully, there are these murals scattered throughout the game which you can interact with and learn a bit, not only about the game’s world, but the actual mythology and culture that inspired the developers over at Nodding Head Games.

Given this strong inspiration, I’d dare to say that the beauty of Raji comes from exploring its world. However, I don’t mean this in the sense that there’s a lot to see if you deviate from the main path, because there isn’t, as the levels are fairly linear. What I mean is that this is just one of those games where you can find some peace and relaxation as you go along its journey. Having said that, combat plays a huge role in Raji, because whenever you engage in combat, you find yourself trapped within the bounds of a magical arena until you finish all enemies, so there is no escaping from it, you just have to embrace it.

Throughout the game, you’ll gain access to three different weapons, a Trishul, a bow, and a sword and shield. Likewise, you’ll also run into two types of magical orbs, one that gives you a devastating single-use area-of-effect ability, and another type that allows you to unlock weapon abilities. These are automatically triggered during combat, and they range from making thunder and meteors rain down upon enemies, to simple electrical stuns or being able to freeze enemies. These ability orbs are not only found as you progress through the game, but also while exploring the levels, as there are often some side-paths and secret areas where you can find these orbs tucked away.

Now, sadly, in terms of the combat itself, it’s quite simplistic. Besides the abilities that I’ve just mentioned, which can trigger at random, you only have a dodge move and a light and heavy attack for each weapon. However, you can actually combine these moves in quick succession to execute different combos. Furthermore, you can also use the environment to your advantage. For example, by running up a wall you can then jump and unleash devastating aerial attacks that can target enemies within a substantial area. Whenever an enemy is low on health, you can also execute it with different cinematic finishers depending on what kind of enemy it is and what weapon you have equipped.

I know I’ve already mentioned how good the game looks, but the movement and attack animations also look very smooth and wonderful on their own. Still, sometimes during combat, when you and the enemies are engaging with each other and are either too close or too far, there can be some occasions where things can look awkward because the animation doesn’t match the distance between you and your target. In any case, you can get away with just spamming the attack keys when facing ordinary enemies, but that doesn’t really work with bosses. During the few boss fights that the game has, you’ll actually spend more time dodging their attacks and figuring out what the best window of opportunity to attack them, rather than actually attacking them. With that said, they all provide significant challenges, and whenever I defeated one of them I was satisfied. 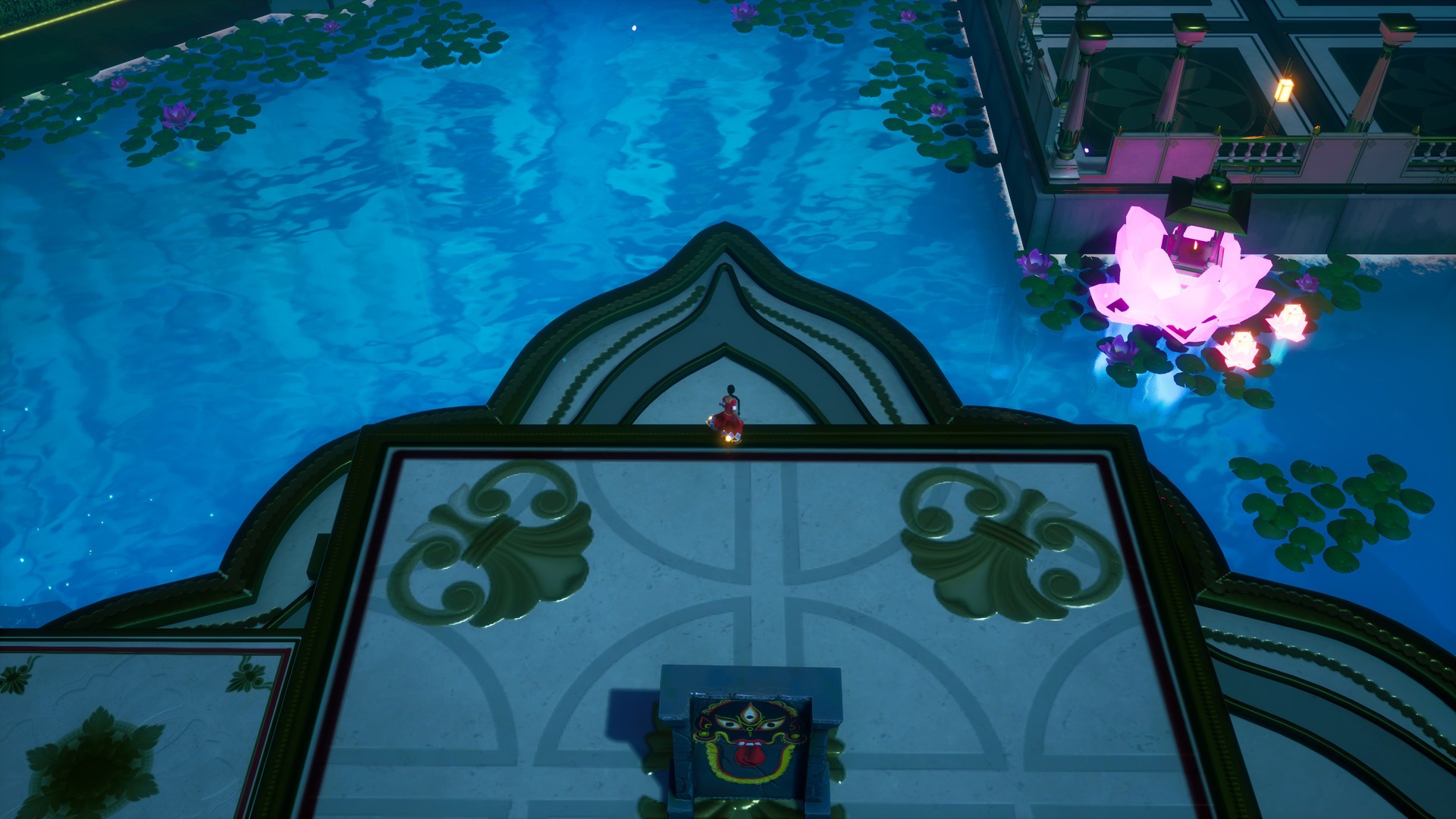 Overall, the combat is a bit of a hit or miss. Although sometimes it can feel great, there are just as many other times when it can also feel off. From enemies that just constantly spam projectiles and make it hard for you to do anything else besides dodging for most of the time, to finishers that leave enemies floating in the air, there’s a bit of everything. In any case, while I’m not a huge fan of the combat, I do have to say that it does manage to stay relatively fresh throughout the entire game, because each level introduces new enemies.

Despite everything, I’ve encountered a few bugs while playing the game. From being unable to cling to ledges while climbing, to the game simply refusing to spawn these water lilies that you must use to cross a few water segments, and in these cases I always had to restart the game to fix the issues. Also, there are a few places where, if you happen to make a wrong turn, just like I did, you might find yourself trapped with no way to go back or progress. In these instances, the only way to fix the issue is to also restart the game, as even if you manage to kill yourself, the auto-save feature might just put you back where you were, and the only way to fix the spawn of certain items is by closing the game and opening it again.

Unfortunately, in spite of its beautiful world and rich environments, I didn’t find Raji’s story to be the game’s strongest suit, nor the combat for that matter, even though that plays a major role in progressing through the game. It’s actually kind of weird to think about it, as now that I’ve finished the game, I realized that there wasn’t really any gameplay system that compelled me to keep playing and go further, but I still did so and kept playing until I reached the end. The reason for that would be that Raji is greater than the sum of its parts. It might not have the best combat, nor the best platforming, or story, but when you combine these three elements alongside its gorgeous looks and music, the whole adventure actually ends up being really solid.

Raji: An Ancient Epic is by no means groundbreaking, nor does it bring anything exciting besides a great glimpse into Indian culture in the form of rather enjoyable combat and action-based platforming adventure, but that’s completely fine. Some people might find it a bit on the short side, not only because there isn’t really any incentive to play through the game more than once, but also because it’s relatively short, with only 6 levels that take about 6 hours to complete, more or else. Nevertheless, on its own, Raji might not be the best game of all time, but it was an absolute delight to play.

Raji: An Ancient Epic is by no means groundbreaking nor it’s the greatest game of all time, but as a whole, it’s a solid action-adventure game featuring some of the best scenarios to take inspiration from Ancient India.