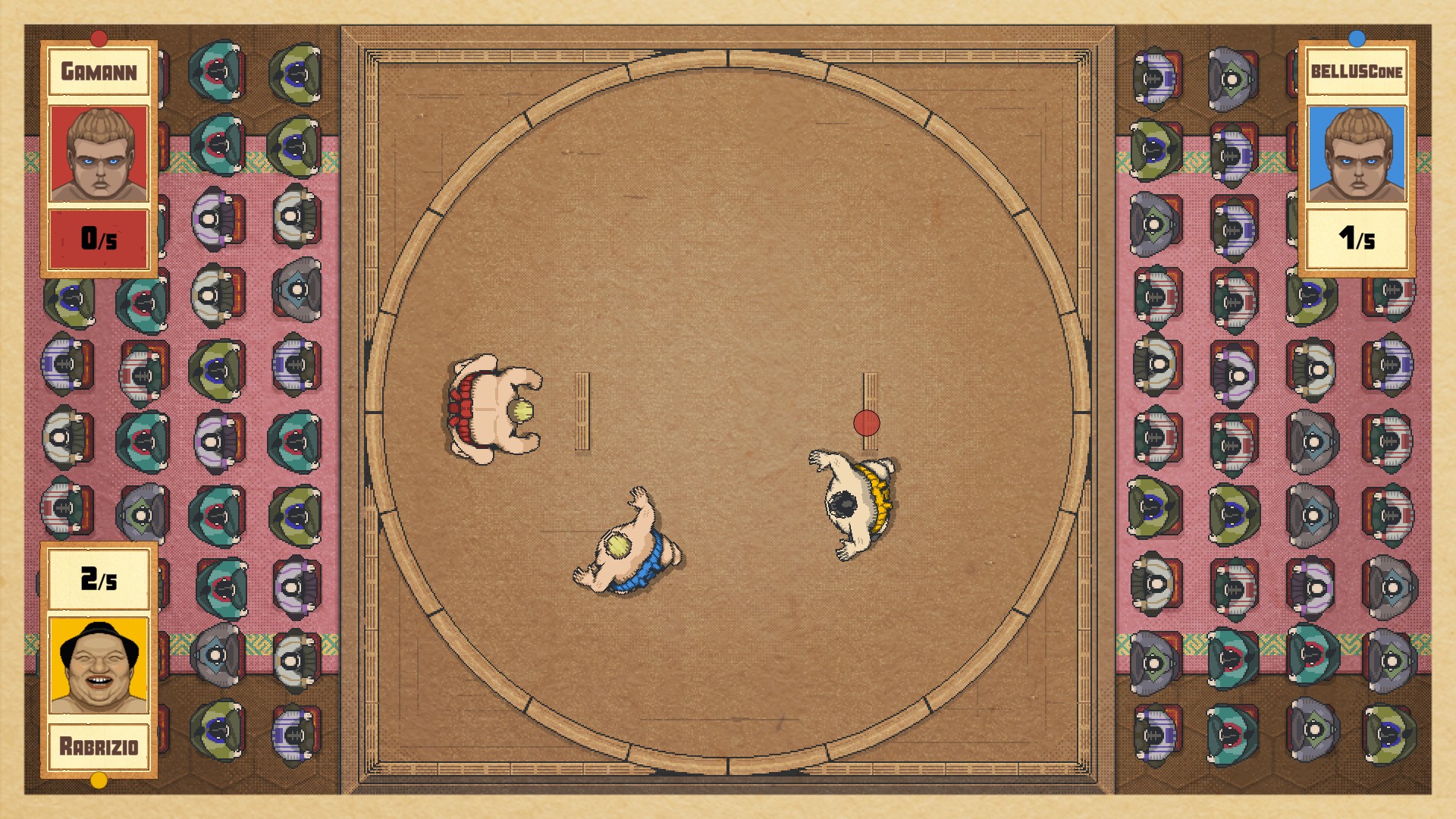 People complain about freemium games all day long, but the fact of the matter is they frigging work. I mean, c’mon, yes, it’s better to pay like five bucks and just get a game outright than to play while dodging through ads and nudges to buy in game currency and stuff like that. I enjoyed my experience with Among Us on the PC more for that aspect than the iOS because it was tiring to see the full screen advertisements as soon as the game was over. However, if you told the average person they could either pay five dollars or pay zero dollars and get NEARLY the exact same game, they would choose zero dollars every time. It is the way of the world, dear gamer, it is not one that shall be corrected anytime soon.

So when Strelka Games and Yonder launched Circle of Sumo some years ago, they found the game was greeted…tepidly. Don’t get me wrong, sales were enough on the Switch to keep the team going, but I don’t think it blew up quite to the same degree as they were expecting. As I said in my original review, multiplayer was the crux of it all, and not enough people were playing, so it didn’t attract as much attention, which led to fewer people playing, and now we’re just circling the drain on the analogy. They needed a way to keep the game alive, and they came up with something brilliant. They axed out the single player aspect entirely, made the game free to play and put it with cross platform access between PC and Switch. The result is Circle of Sumo: Online Rumble, and it’s a pretty sweet move that has already generated a significant user base, if only for the moment.

The concept is still the same as the original Circle of Sumo, but we can hash it out if you’d like. You play one of several Sumo wrestlers that have different stats in sprint, power and acceleration. Your objective, like all sumo matches, is to knock your opponents out of the ring. There are several ideas that differentiate this from traditional sumo matches. For one, there’s four people going at once, which is significantly different from what I saw at the Budokan years ago. Additionally, the area is constantly changing between matches, going from an old school ring to a small island in the ocean and even to the magma crusted interior of a volcano. The Sumo wrestlers can do standard walking and running, and also charge up for a sumo dash of sorts that launches you, E.Honda style, at the opposition with no chance to change direction one you start moving. Experienced players will also get good at well timed counter attack moves, blocks and dodges, so the matches rarely, if ever, go as planned. The first player to make five wins is the champion and then gets Mon, the minor currency of the game. 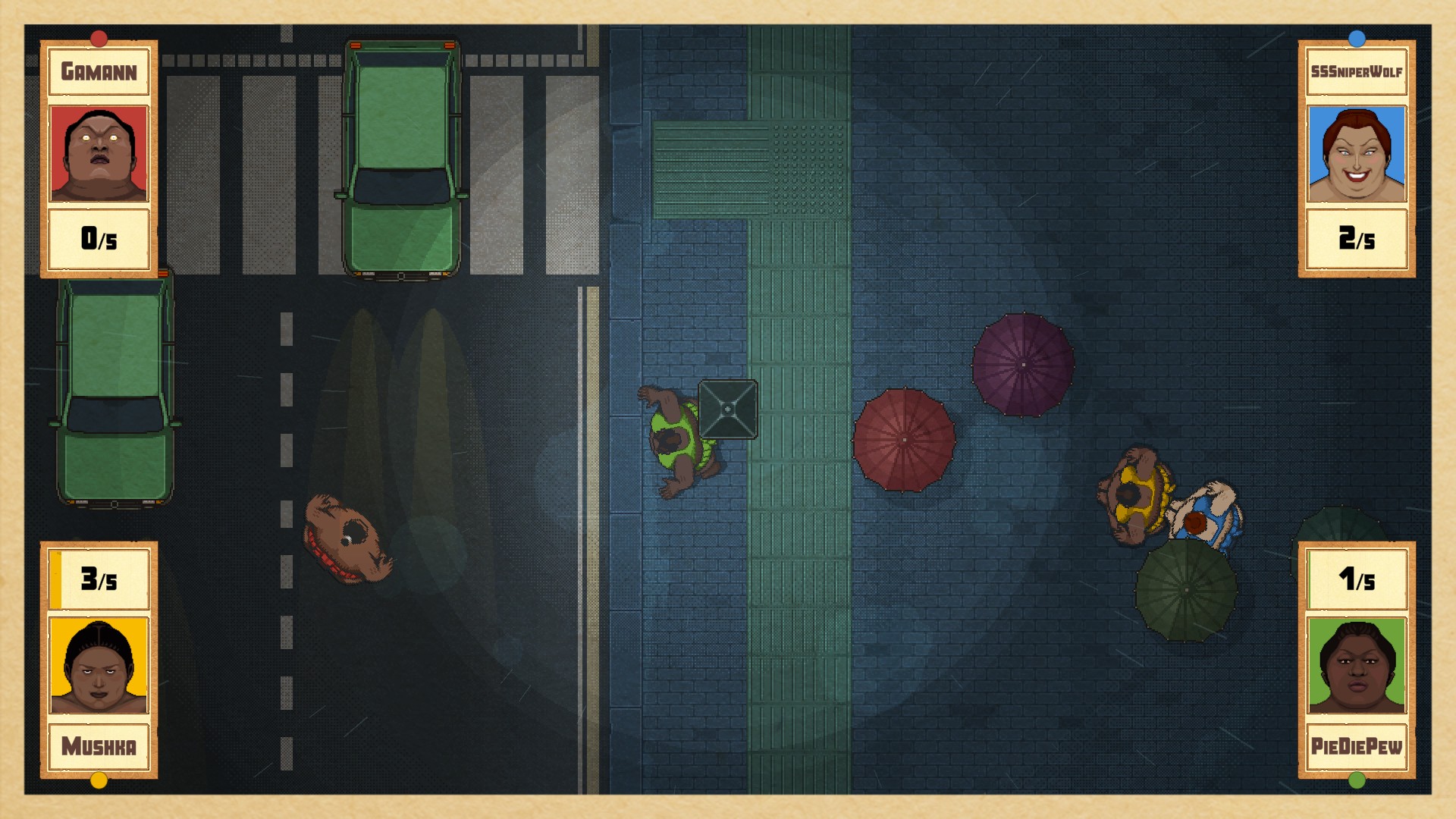 So how does the game get overhauled and make it work? Well, in the original Circle of Sumo, playing the practices and getting your single player game built up equalled unlocking new arenas and areas to enjoy with friends when you had someone to play against. Now, everything is unlocked…sort of. At first, your only options are to use the “random” button for everything. While this might not seem like much, it becomes more difficult for players to identify a style of playing that works out best for them. As someone who is inherently terrible at the sumo bullet dash and, instead, prefers traditional pushing methods, it behoves me more when I get Deadly Lotus as opposed to Night Hunter. The different arenas are also randomized, but I still chose this option ten times out of ten, even after I had unlocked some zones. Having the play field randomized is more fun, as you never know if you’ll be in the very difficult moving spotlight stage or, my personal favourite, deep inside a well where the cover slowly moves into place, forcing long staying players to fight blind. These both are unlocked with a new currency called Ryo, which is tied directly to payment.

Keep in mind, if you are dedicated, you don’t need to pay money. Circle of Sumo: Online Rumble now has loot boxes available, and you can buy the boxes only with Mon, which you can get only from winning. So if you don’t mind the long grind, you can effectively get new arenas and characters from grinding, if that’s your prerogative. Players can also invest their Mon into boxes to unlock emotes, including some special Halloween emotes that were just added yesterday in order to get in the Halloween spirit. You do need to factor in ideas about cash and success, though. Winning a full game usually gets you 50-100 Mon, depending on how many players participate, and emotes are 300 while the characters and arena double pack is 2000. That means winning 20 full four person games, which isn’t totally impossible, but also isn’t a short hop.

The game, for what it’s worth, still looks and plays amazingly. I got a chance to do Circle of Sumo: Online Rumble on both my Switch and Steam, and I vastly preferred the Steam version. While the Switch offers great button support, players who are used to WASD and mouse will have great success with the mapping of the dodges and strikes to mouse buttons while moving and counterattacking with the keyboard. There were a couple of times I got matched with myself, allowing for a decent vantage of delay between the input and consoles: there is none. The different locations seem crisper and more vibrant, which is great given all the time a player might be putting into these matches. There was never a clear case of one player dominating a board, either. I had one memorable match where we got into a four way tie for first place and players were incredibly cautious, circling each other as they prepared to see who was going to knock over all the wooden crosses and get dumped first. I got 30 Mon for that one, but it was more worthwhile for the fun group experience. 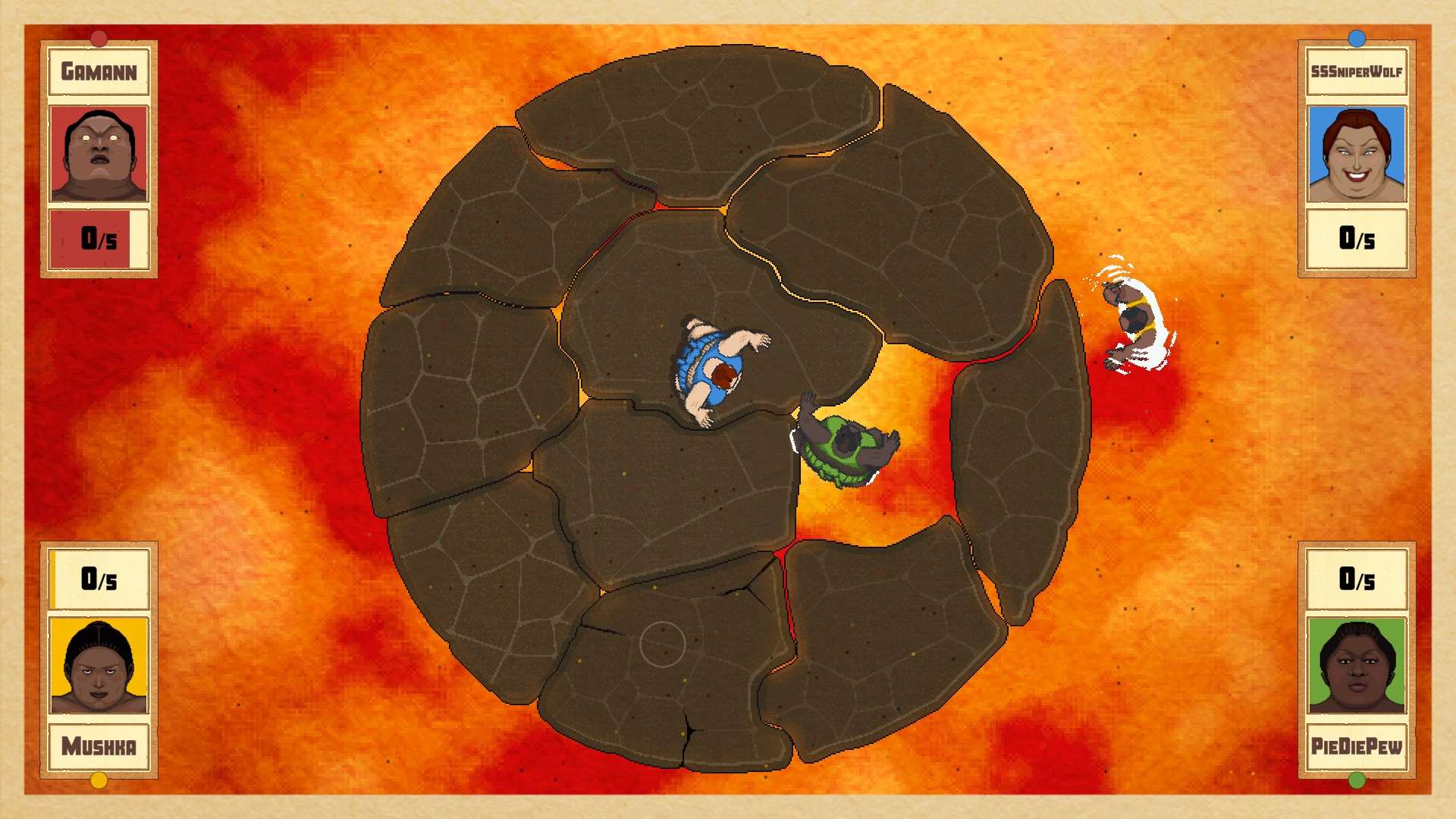 The emotes are cute and totally unnecessary, adding nothing of note to the game. You can assign for emotes at a time (either to the control pad or to numbers 1-4) and basically spam them at any time in the match, projecting some kind of reaction over your sumo’s profile. The Halloween ones are all spooky in nature, including some great Japanese demon inspired designs, and the traditional emotes convey anger, joy, frustration and confusion. There are a ton, and both the fighters and the emotes are labelled as “season one,” which makes it seem like Strelka is planning to add more as the game takes off. Which makes sense: like all online gaming, it’s all about being a collector and getting the “seasons” of items which proves what a long time player you are. With a little luck, we’ll see an even greater variety of Sumo wrestlers in the future, maybe even some crossover promos (will Shovel Knight next join this indie title??).

There’s a metric ton of strategy, skill and luck that goes into Circle of Sumo: Online Rumble. Players learning to throw their weight around will gravitate towards the powerhouse sumos in order to win through sheer brute force, while players determined to manipulate the environment might find success with the lighter sumos. If you have the patience and the skill, you can even bring your sumo “back from the dead” if you’re fortunate (the moving spotlight ring can be very generous if you play your cards right). I think that the choice to go freemium was a smart one, and honestly helped to reignite my interest in the game. By creating a space where players are actively congregating (only waited about 15 seconds per matchmaking), more people are getting involved, and more people are picking up the original game to practice and also to create a local player environment as it catches fire. We might not always like the state of how games move online, but you can’t deny the numbers: this was a yobimodoshi.

The multiplayer sumo game returns with some new takes on going online, staying freemium and, ultimately, delivering a much stronger and more fun package.