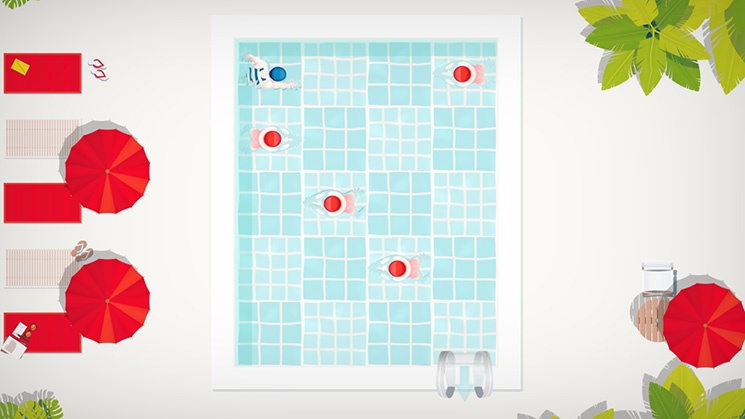 Fancy a swim? Better, dust off your swim caps, don your bathing suits and get ready to dip your toes into the water as Swim Out makes a splash on the Nintendo Switch. While the idea of a swimming puzzle game may seem odd it has its own charm and at least there isn’t any wee in this virtual pool – not that I found when I took a swim anyway…

Delightfully minimalistic, Swim Out is a puzzle game unlike any other that involves your character swimming from one end of the pool getting to the ladders on another end. Sounds easy, but with annoying obstacles in the way, a lap of the pool won’t be as simple as you think.

The game starts without any story and a very basic overview of the controls – there are no menus, or any set up – your character has a blue cap and is ready to make some waves. Moving your unnamed character one square of pool at a time you must navigate to the stairs out of the pool or some levels that contain an exit to another pool that will enable you to complete the level. For example, you’ll be able to swim to one part, pick up an item such as safety ring needed to stop other swimmers in their tracks enabling you to breast stroke past to the exit. 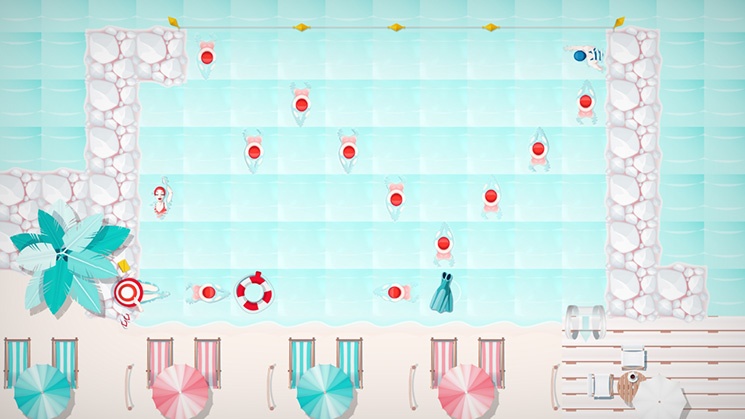 You know when you’re at a real-life swimming pool when people seem to get in the way of your swim? This is what the premise of Swim Out is – you must swim across without touching any other swimmers or people dipping their toes into the pool. If you do, it’s game over and back to the start for your blue friend. The other swimmers are red to make it clear where you can and can’t go. You move one square of the pool at a time, as do they. You’ll soon discover that certain swimmers move in different ways – for example some move one square of the pool at a time same as your character, while others such as divers can take up to 3 squares – but also must wait 3 turns to get going.

Some levels are simple, and I felt I could see the correct route clearly, while others took a few attempts to get it right. As you progress levels become increasingly difficult – adding more swimmers in your path or even ones with wider reach in the pool. Different objects become available – ranging from goggles that allow you to skip a turn (and the other red swimmers move forward one space) or flippers that allow you to swim two spaces at once. It adds a complexity to the level such as, should you use the flippers now to get ahead or will you need them further in the level? It’s a trial and error basis that will keep you guessing in Swim Out.

There are a range of floats – some will allow your character to move round 2 spaces at once and others will take 2 spaces as you swim. It sounds complicated but it’s not – you will soon discover how each of the items work and when best to use them. With 7 Acts containing 15 levels each – you’ll soon make lengths of the game but once stuck, it can be frustrating especially when you’ve managed to swim halfway through and must start all over again but the beauty of Swim Out is finding a path will soon help you swim through the level.

The graphics are full of bright colours but very similar in the levels. I soon got tired of seeing the same pool side quite quick – it only changes once you get to act 3. Animations of the swimmers are super simple and nothing to write home about. 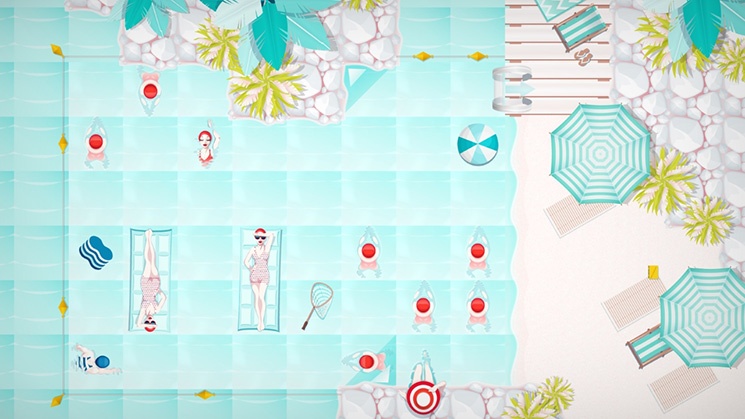 There isn’t much music in the game – more recordings of a pool with some splash noises and general chatter. But it does not change throughout. I grew bored of the same noises within the first few levels so soon switched on Spotify instead.

Without any story or different modes, Swim Out could be completed quickly depending on your skill level. Some levels include stars or extras for you to get but don’t really add much to the overall game. I would have liked to be able to customise your character, pick abilities and even be able to design your own puzzles that would have added so much more depth than Swim Out lacks – odd for a game set in a swimming pool.

It feels the game would be much better suited to mobile and even though the Nintendo Switch is portable, to me the game would suit a few taps on a smaller screen rather than a console game with buttons on a controller though I can’t say why. Sort of like a mash-up of Rush hour the board game and erm, a swimming pool, Swim Out has an undeniable simplicity that makes it very easy to pick up and play. The problem is, other than for puzzle enthusiasts there isn’t much here for other gamers. The puzzles are well thought out, easy to learn and not overly difficult to master. Swimming in this pool won’t take much effort but will make for enjoyable gentle laps for those looking for their next puzzle fix. Just don’t forget your towel this time, ok?