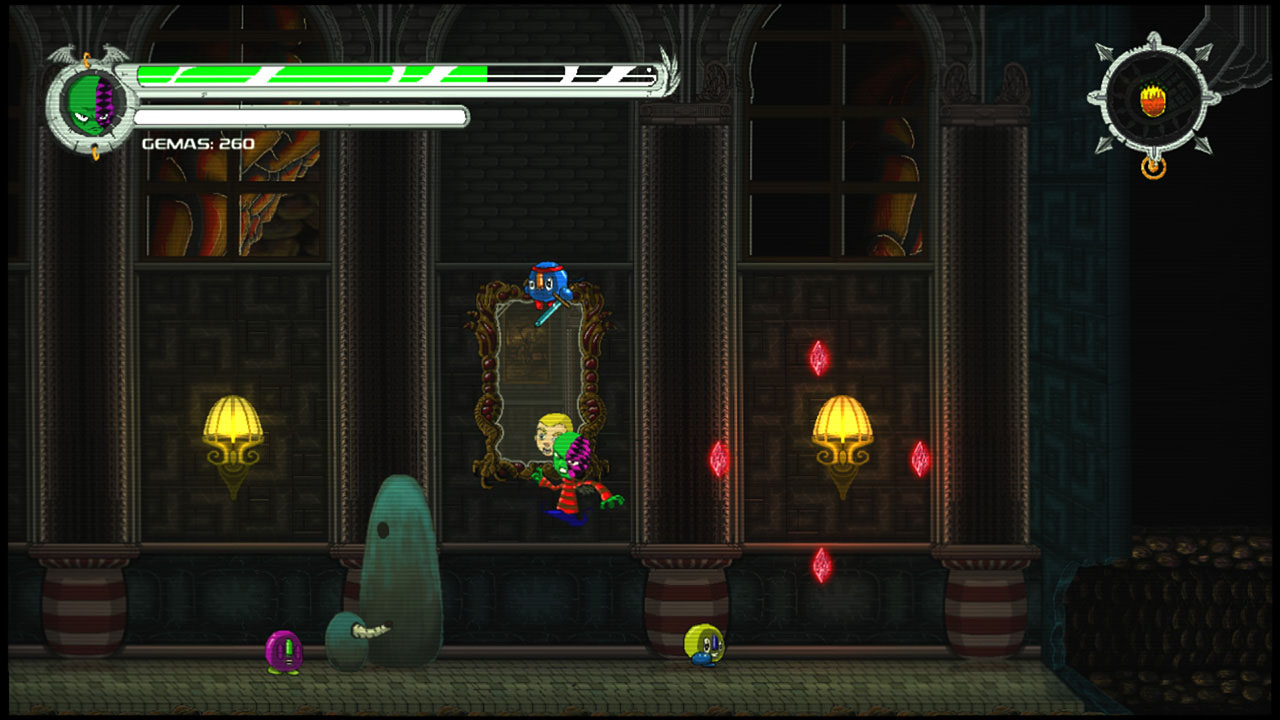 Nightmare Boy starts off with the protagonist a young boy called Billy who is getting ready for bed. Quickly things get weird. Billy’s pillow is possessed by an evil wizard and transforms his body to that of this world’s prince, who has recently ended up in the morgue, while making comments about love and a queen. Although maybe logical in Donorok land of nightmares, kidnapping a child and turning them into someone’s dead child isn’t the normal way to get somebody to love you. Disappointingly for the pillow, he didn’t manage to wipe all of Billy’s memories and instead you now play as Billy trapped in the body of a prince of nightmares.

This somewhat odd start kicks off another Metroidvania addition to the Nintendo Switch and is developed by The Vanir Project. Core gameplay elements in Nightmare Boy are what we have come to expect from the genre; a 2D platforming game with a giant map you need to explore filled with respawning enemies and difficult bosses.

Controls are simple with a jump button, a regular attack, and a button for spells. Jumping feels extremely floaty, with double jump often activating after one press and leaving you without the second jump you expected to have. On its own this wouldn’t be much of a problem but platforming sections are incredibly difficult from the get go. I defeated a boss that took a few goes in a room full of lava and rocky platforms. As I landed the final blow I fell, unable to double jump for whatever reason, Billy landed in the lava, instantly dying, and I had to do it all over again.

Enemy placement can often feel cheap, with flying or teleporting enemies spawning on top of you. This doesn’t work well when you can die so easily. Health is often hard to come by. The game is often too dark to see and enemy colours are deep and difficult to see. In the first boss there are floating invisible enemies that have a green outline, but when you have to dodge fireballs that drop from the ceiling, the screen turns red and those green outlines become impossible to see. 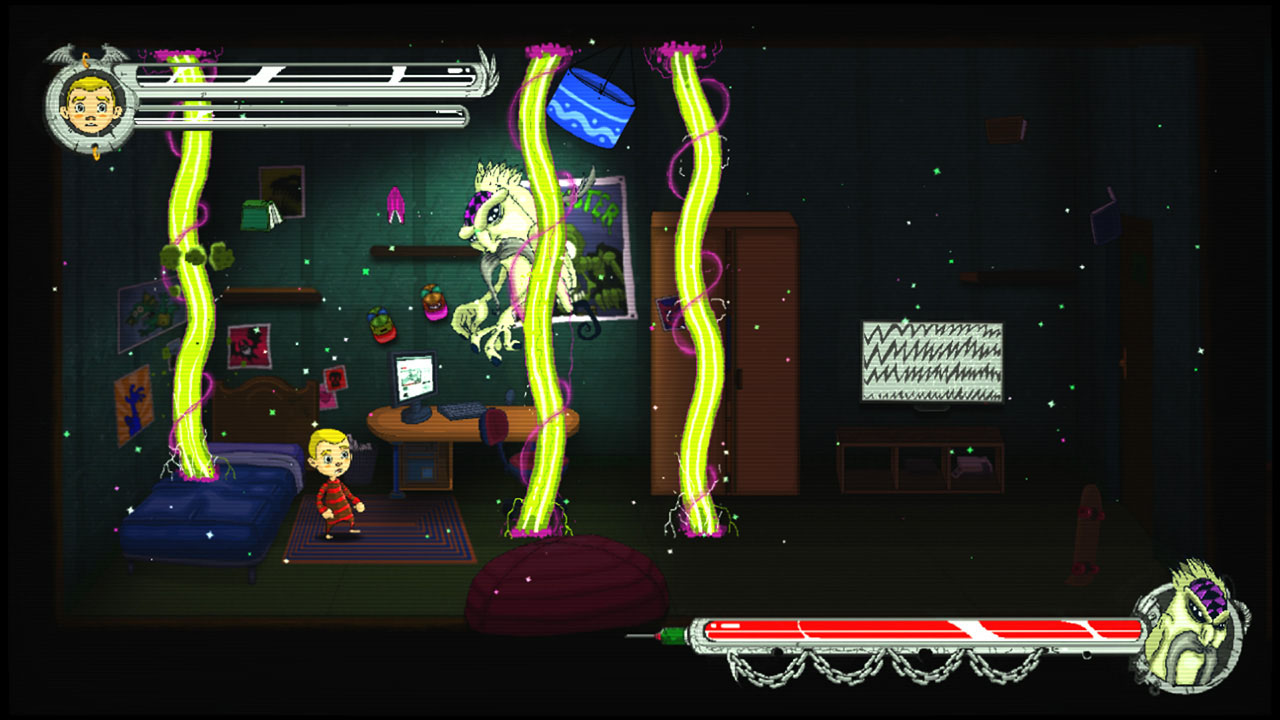 An out-dated save system can sometimes be endearing, however for this game it just adds to the frustration. After dying what you have accomplished is autosaved, such as bosses and items you’ve collected, but you have to travel to a room to properly save, which costs an increasing amount of gems depending on how many times you have saved. When you die, you are teleported to the last save room you used, and since there is no teleport option when fighting bosses you have to travel through the often multiple screens of enemies and platforming sections just to get another chance at them. Yes, by the time you finally beat a boss you will have mastered these screens but it just seemed unnecessary. I had difficulty with one boss that ended up taking me multiple retries, to then on the next screen get stuck between 2 skeletons leading to the game crashing. Because there is no hard autosave I had to do the boss all over again.

The graphics are a bit wobbly in places but are good enough. Particular elements look amazing, such as the first time you look out on to the nightmare kingdom and the moon is there with its Major’s Mask like stare. A major issue comes with a filter on the screen that causes distracting lines. The only option of a different filter is ‘Retro’ and that actually adds even more lines and makes the problem worse. Music is a highlight in the game, being very strong, giving off a feeling of dread which fits the setting perfectly.

There’s a strange morality to the game in the form of ‘Mongos’, small cute creatures that are found throughout the game. Due to them always being close to enemies, you’ll find very early on that they can be killed. Not long after the first boss their leader confronts you and tells you off for how many you have either inadvertently or purposefully murdered (by that point I had accidently killed 16). He makes reference to a mechanic I never really noticed, that the more you kill the harder the enemies but in return the more gems they drop (something about bounties placed on your head). It was an interesting idea, making me feel guilty if I killed one by accident, but they are almost always standing by an enemy or a treasure chest. Telling you off for killing a certain creature is fine, but having them all over the screen often by things you have to hit makes it an unfair addition. 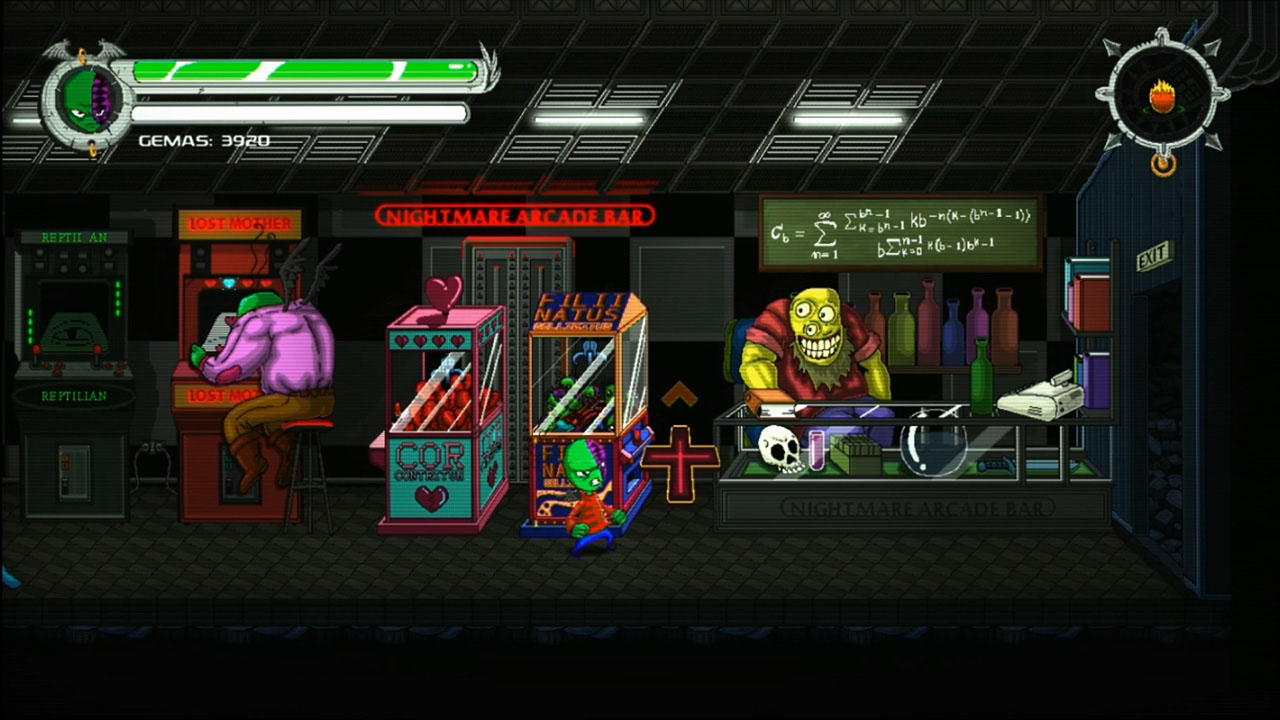 Vibrating controllers should almost go unnoticed, like a continuity edit. Instead they are obnoxiously strong and even loud. This highlights an issue with the options. You don’t get a lot you can actually change such as text speed – which you would expect, and the presets are odd. The game is automatically set to easy, music set to 70% and SFX is 30%. Although very pedantic to complain about, it just seemed odd to not have the music 50/50 and the game automatically on normal. Even more pedantic the B button is accept throughout the whole game, but on the retry screen you have to press A to continue. Poor attention to detail is a major problem and this persists throughout the games dialogue. English does not appear to be the developer’s first language. Writing is often ill-thought out and spelling can sometimes be a problem.

Depending on skill level and difficulty setting the story sits around 4-5 hours long. There is the odd collectible but there’s nothing that would make you want to come back for a second helping unless you’re a big fan of the game.

I found Billy as a character unconvincing. He’s a young boy thrown into this nightmare world but he takes it all very lightly (even if worse case he will lose his mind and have his body taken over by a nightmare prince). The way he talks is not like a child, you can feel the characters were written without the age being taken into consideration. This really categorises the whole game, it feels like the target audience won’t be catered to as well as they could have been. Hardcore metroidvania fans might find it a good distraction or those who need a new Switch game to tide them over until the next big Nintendo release.