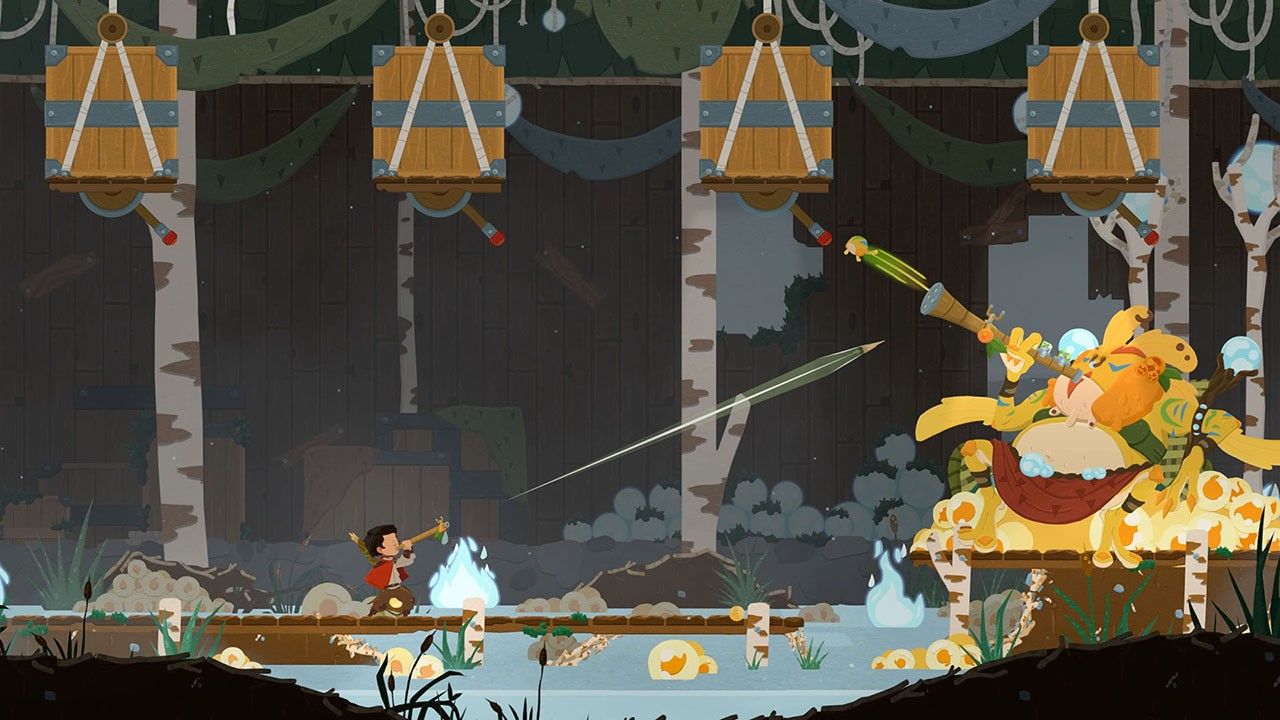 One of the tragedies of the hero is to be thrust, cast or even born into a role they take, regardless of their reluctance. Many people don’t understand that the protagonists we witness through literature, film and games are often victims of circumstance, not their own personal design. The antihero of Ulysses would have vastly preferred just going home and spending time with his wife versus years of wandering, but that is why you always thank Poseidon for his help no matter what. Yet so few people realize there are villains that are made in the same way. The views of good and evil can often be subjective, and sometimes even the bad guys are products of happenstance, not choice. Without spoiling too much, it is these notes we should keep in mind as we explore the sorrow trodden tale of Wilfred in Legends of Ethernal.

The narrator lets you know from the beginning of this adventure puzzle platformer that it’s not a happy story. This historian is reflecting on the events that lead to a terrible calamity in the realm of Arkansys, called only The Uncovering, and how it lead to not only the downfall of society, but also of the planet. We then journey six years back in the past to Wilfred, who has a loving mother and father and is just trying to live his life fishing and being cool. Then, suddenly, he returns home to find his parents gone. He panics; he’s never been alone before, and it’s not a good fit for him. Determined to find out what happened, he sets out to the nearest village, but is waylaid with shocking news about what may have befallen them. Quickly, Wilfred finds himself embroiled in a large, terrifying world full of deceit and many people viewing the truth and the right things as different sides of the coin. Wilfred is called a hero by historians, for his actions lead to something marvellous, but what is a hero to some than a villain to others?

Legends of Ethernal is equal parts action adventure with some serious storytelling vibes, and the developers (brand new team Lucid Dreams Studio) make that clear from the get go. There are so many different difficulty levels that players can experience, from the normal mode to the “Relaxed Mode” for more story focus to the impossibly stupid “Hardcore Mode” with permadeath. Speaking as someone who is middling at best with video games, I must discourage Hardcore Mode until much, much later in your life. Wilfred is a hearty lad, but he gets hit a lot and, sadly, cannot swim. There is more water in this game than I’d like, and you will absolutely fall into in when you’re getting a feel for the game. I’d even go so far as to recommend Relaxed Mode from the beginning so you can get a better idea of the controls and the gameplay, but Normal should be great as long as you remember one thing: stocky jumps. 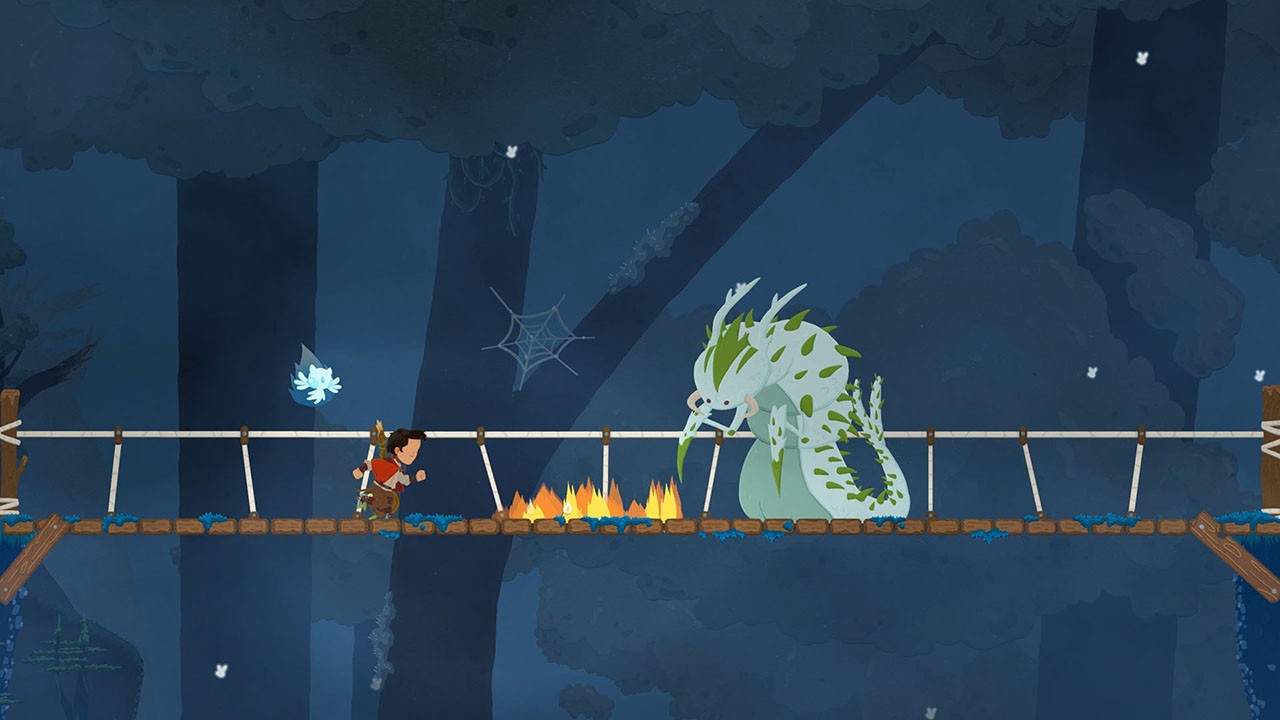 Wilfred is a great character to control with a good variety of movements and techniques. He can jump and grip onto ledges and platforms, swings his weapons well and has a fantastic dodge roll that’s even more important than players may realize. He also collects Ethers, which are coloured spheres that allow him to do certain magical actions. These include healing, stun grenades, and doing super powerful melee attacks. His jumps, as I mentioned, are a bit stiffer than I’d like, but this isn’t going to cause NES level frustration with missing moments. Rather, Wilfred has a learning curve that all players will get used to as they progress. Once you’ve got a handle on him and realize that, hands down, the fishing rod is always going to be the best weapon if you have a choice (I’m stubbornly firm on this point), you’ll be all set, and then you can explore Arkansys to your heart’s content.

I will say, right away, that I was incredibly charmed by Legends of Ethernal. In spite of the narration and the characters being voiceless, that seemed to make the presentation of the game all the more inviting and enthralling. I had this retro feeling throughout that didn’t come through as a game purposely designed to emulate the notion of gaming from yesteryear. Instead, I thought Lucid Dreams Studio has somehow managed to capture the nostalgic feeling of those classic games without kowtowing and totally investing in making a pixel art, throwback game. The way the characters deliver themselves – from Wilfred’s emotionally tenuous personality to the rage of the Jarken beings to even the most innocuous NPC – all came across with startling clarity. I mean, Old Man Blanston is an obvious favourite, but that’s not the point. Somehow there is a very fine line between old and new school that Legends of Ethernal walks with the way the story is delivered, and it works fantastically: I couldn’t stop playing, even though I felt the load screens for when I died took just a bit longer than I would have liked.

The developers also buried the lead a bit with their game. Legends of Ethernal is an action adventure game with plenty of story, this much is true, but it’s also very much a metrovania. There are so many times where the items you discover will be usable in other locations and, indeed, progress will be impeded until you have the right spells/blowgun in hand to move forward. Granted, it’s not nearly as double back exploratory as some games might be, but it’s quite a bit more involved than the average adventure game, so keep that in mind. Wilfred will find many ways to deal with traps, blockades and combat throughout his journey, and you gotta get good at fighting. The good part is that the dodge roll is 100% your best friend. You dodge projectiles. You dodge collision damage. Somehow, I was able to dodge slamming tree trunks during one boss battle, and I never stopped to question it. You begin to see how something like the Hardcore mode could be enticing because there’s a great deal of satisfaction from fighting off a particularly angry Bruwig brawler without getting a scratch on you, which is the hallmark of well done combat. It can be downright exciting to really get into a good groove of movement and attacks, and the outcome is you not needing to desperately try and find the last two red Ethers needed to fill up your health bar. 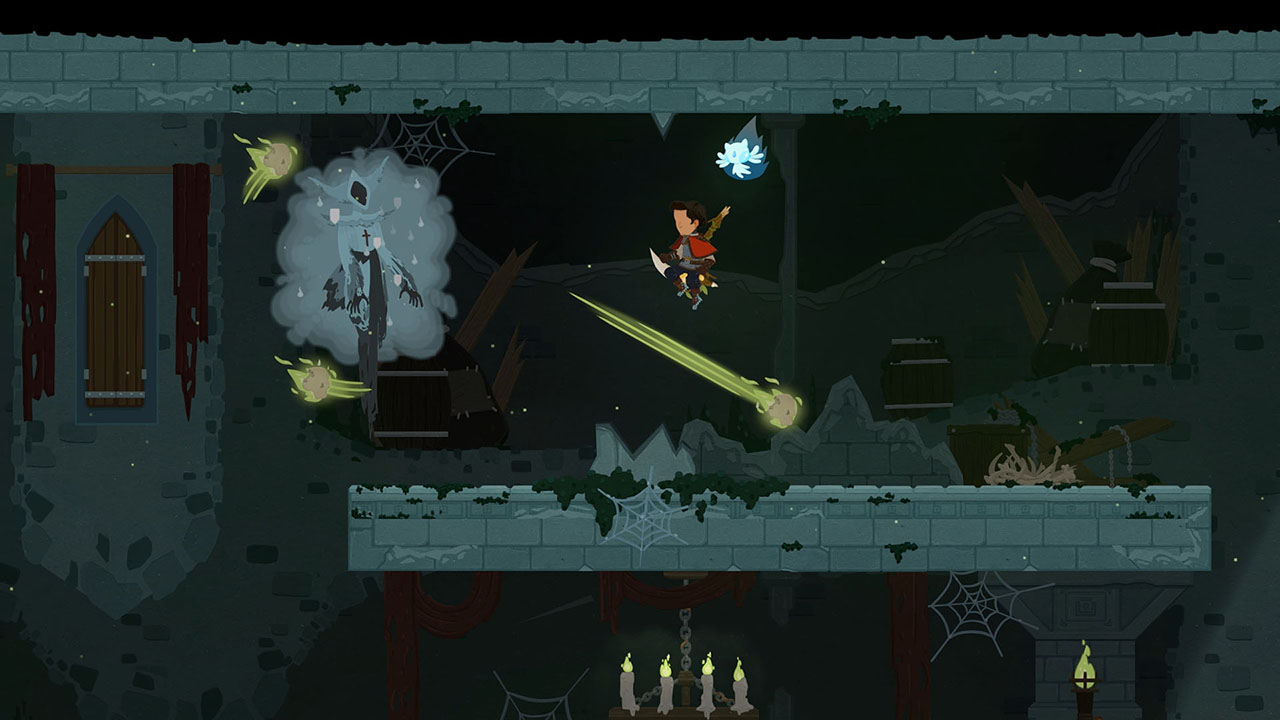 The soundtrack of Legends of Ethernal is not to be overlooked, either. Like so many great titles that seek to evoke certain elements of wonder and enchantment, there is a constant, ambient soundtrack that follows Wilfred through his tragic journey, painting different moods and colours wherever you roam. It’s something so prominent that you hear music in the game before you even see the title cards, allowing lonely notes to join you in the darkness as light breaks onto the future of your game. The soundtrack is something that follows you and is as much a part of your journey as Wilfred, bringing up nods from epic scores like what you’d hear from Hans Zimmer to isolated melodies that call up some of Gheorghe Zamfir’s finer works. The soundtrack is far from eclectic, but is a beautiful blend of many different feelings and genre inspirations to bring what can only be Arkansys.

It’s very evident what Legends of Ethernal is trying to be, and I can’t fault the game or the developers for that. Lovingly crafted as both a salute to games of the past and a proud statement of a game of their own, it’s easy to see why Natsume wanted to be the publisher for Lucid Dreams Studio’s first work. There is so much about the story that I purposely have not spoiled, but I deeply encourage people to go in blind and know that there is something special here. It has all the best elements of modern Zelda classics while retaining a personal identity that is so much Wilfred Van Dervill that it couldn’t be anything else. Come and find out the truth about The Uncovering for yourself. The Legend begins, and you shall be there.

There is a tale here, one of sorrow and love, but also one of betrayal and redemption. This is the story of Wilfred, and we are all honoured to witness it.