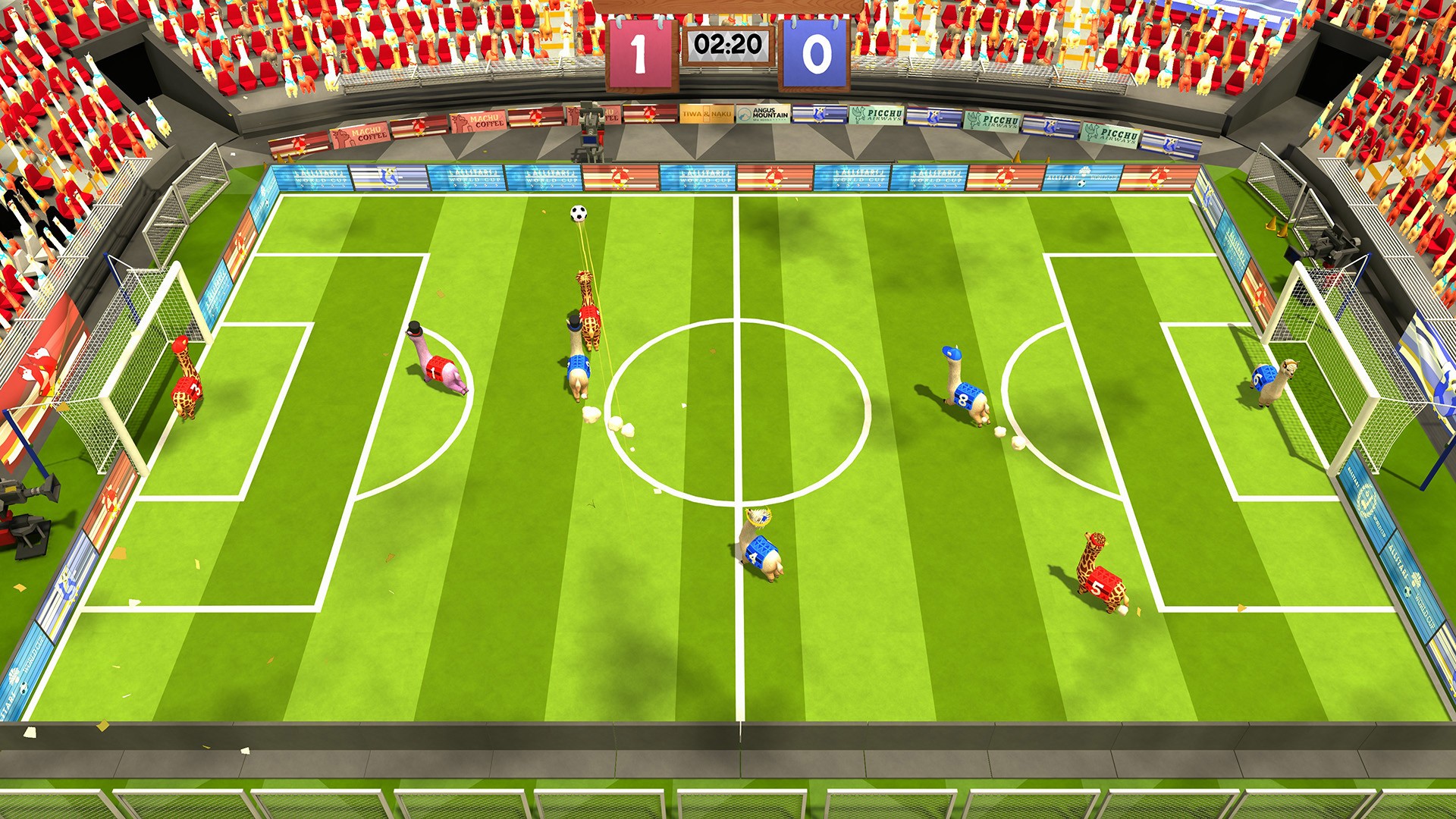 Like most people who are signed up to social media, I have an Instagram account. I use this mainly to post my reviews, but also to follow publishers and developers that I like the look of. One of these publishers recently brought a new game to the market, and it instantly caught my eye. It combines two things that I love; Football and alpacas. Yep, one of the most renowned combinations to exist, like; Rhubarb and custard, peanut butter and jam (jelly), and Ant and Dec. Alpaca Ball: Allstars is a tale about a young alpaca who must work his way around the world, proving his worth to the many other alpacas that he meets on his travels, and winning every match that he takes part in.

Developed by Salt Castle Studio and published by BadLand Publishing, this crazy football game allows you to play solo, cooperatively with one friend, or against 7 other players in several quick matches that are as fun as they are ridiculous. So, what is the point of this game then? You must skip, hop, and jump your way around a variety of arenas, hitting whatever ball that is selected into your opponent’s goal, while desperately defending your own. The gameplay is fast, messy, and mixed up with several power-ups that randomly spawn for each player.

The game opens with a short dialogue that helps to set the scene. The still image of an alpaca giving you orders to help to explain the situation made me chuckle. It highlighted the ridiculous nature of this title and sets you up for your journey of madness. Not that it is needed, but your first port of call is a simple tutorial, it allows you the freedom to kick a ball, fling your long neck around, and generally just muck about with no pressure. Once you have gotten through this, you must embark on your quest to be the best football playing alpaca that the world has seen. Each of the stages uses slightly differing gaming mechanics. Once you have unlocked a new element, this can be chucked into the mix during any other match.

So you’ve now got a rough idea of the gaming premise, what about the gameplay itself, what’s that like? Simply put, have you ever been in the position where you have to watch your children, or a niece or nephew playing football? You know, that cute little child who’s super excited about getting on the pitch to kick a ball around. Well, that’s exactly what this looks like (except with alpacas). Everyone runs around at full speed desperately trying to get the ball. You all want to be the striker, and you’re left with no defence or keeper. Forget tactics, formations, and everything that you know about conventional football. The rules do not apply in the alpaca arena, and anything goes. Smash your opponent, stay offside, and run around like a headless chicken. After all, all that matters is that you score goals and win. 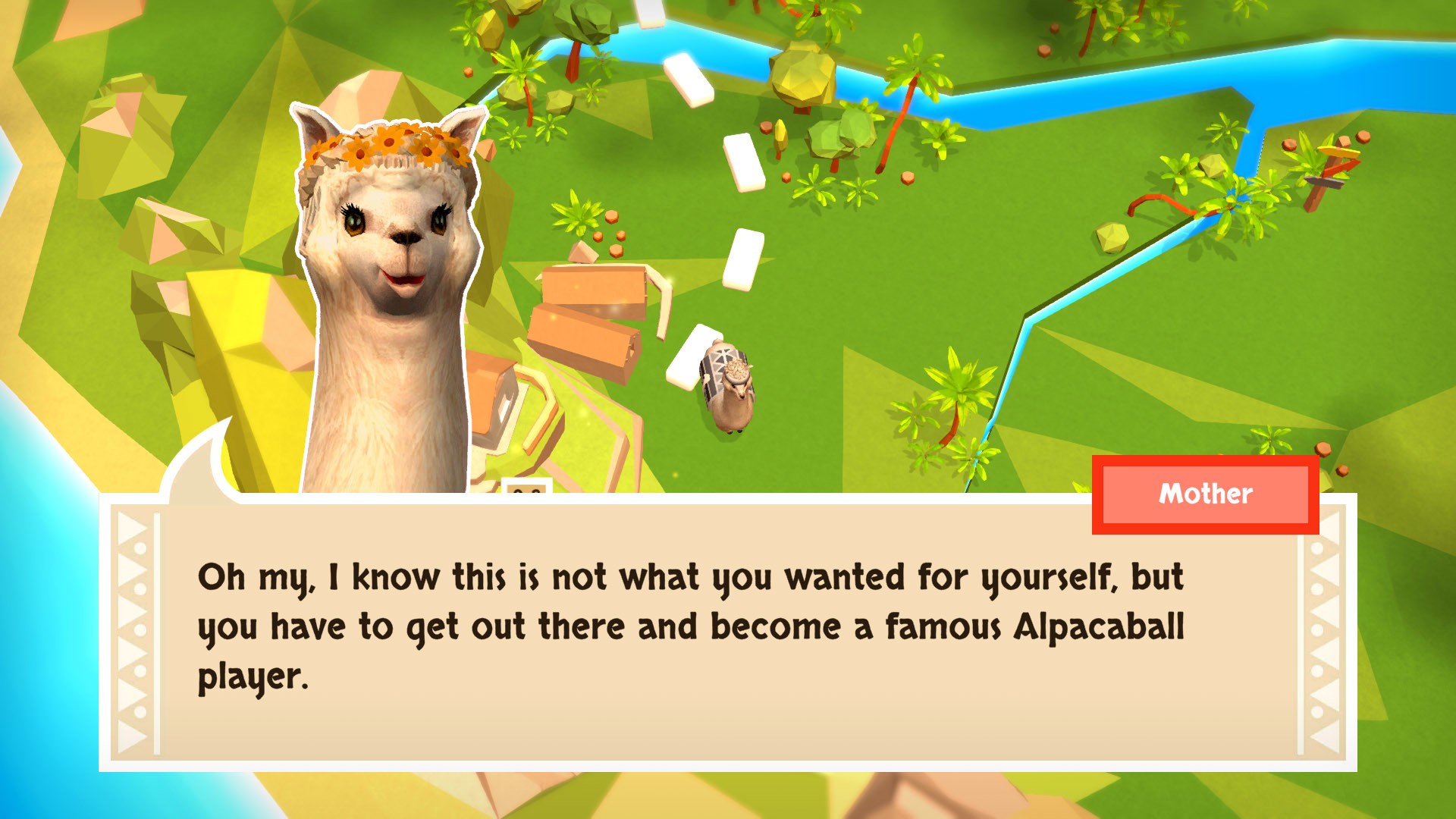 Who wouldn’t want to be the best in the world, when their mother is so supportive.

You may think, “That sounds insane, what’s the point in playing a sport if there are no rules!” To put it bluntly, it was fantastic. Galloping around without a care in the world, watching worldy goals flying in from all over the park, and crashing into barriers is what makes this game so ingenious. If you then top this with the physics defying movement of all the animals involved, and you’ve got yourself a crazy and unbelievable funny title to sink your teeth into. The gameplay reminded me of a couple of titles; Rocket League and Human: Fall Flat. The first because each of the matches plays out at lightning speed, the ball zips around, and anybody can score or defend from any position on the pitch. It’s not as polished as its vehicle inspired relative, but it is just as addictive. The flexibility of the alpacas, and the way they move made me think of the jelly like protagonist from Human: Fall Flat, it was great fun colliding with the opposition, or the barriers, and being sent flying into the stratosphere. I constantly chuckled at the stupidity of it all, and couldn’t take it seriously.

When you think you have got the game nailed, and that you have mastered the arena, the game chucks something else into the mix. The most obvious addition, the power-ups. These game changers spawn randomly in a match, you could hold a healthy lead, and suddenly everyone is shrunk except one player. They now run riot, pushing you out of the way, and easily scoring goals. It always seemed so unfair, but I knew that power-ups could be gifted at any time, so it was just a case of waiting for my time to shine.

Unlike other football games on the market, Alpaca Ball: Allstars hasn’t gone for the realistic approach. It’s probably a good job as I’m not sure I know many famous alpacas, so it would have been a bit of a waste of time and money. The cartoon approach is bright and exciting to look at. The arenas all have a unique look, which helped to keep the action fresh. The developers allowed you to use a small customisation screen to design your character, so it was easy to identify your player amongst the others when it got hectic. The classic aerial camera angle makes observing each match easy, I had very few issues with the graphics, and it kept up with everything that the game threw at it.

I’m a big fan of titles that use simple, yet effective audio to support their premise, and that’s exactly what has happened in this game. The music is fun, upbeat, and keeps you sprinting at full pace. Like the change in visuals within each arena, the music also alters. The songs take on a relevant style to the area that the match plays out and brings each country to life. I adored the crashing sound of the players colliding with each other, and the arena structure. The sound effects were over the top and reminded me of cartoons I watched when I was a child. The sound and the graphics worked perfectly hand in hand to support the game premise and it brings it all to life. 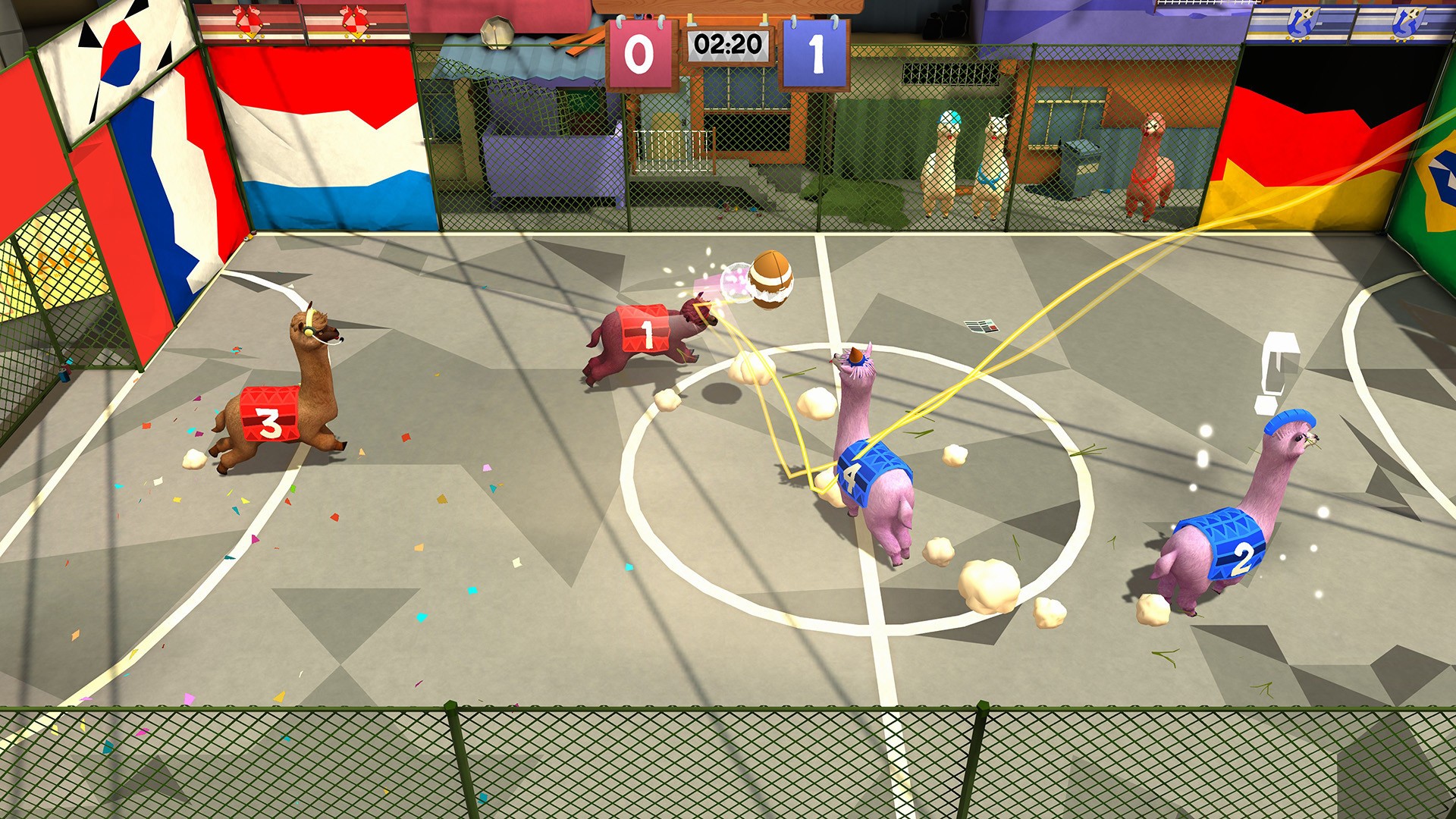 The alpacas will play anywhere, and with any ball. They just love their sport so much!

One thing I was glad to see when I loaded the game up was full controller support. Not that it would have been difficult to play using a mouse and keyboard, as the controls are simple to pick up. The controller mapping was very good, it was easy to understand, and by the end of the first match you will feel you’ve played it for years. The swinging motion of the necks and heads takes a bit of getting used to. This has an impact on the accuracy of your shooting, and you’ll end up missing several open goals. I blamed the controls for this, naturally, as it was absolutely nothing to do with my level of skill (that’s sarcasm just in case it’s lost among the words).

Alpaca Ball: Allstars is addictive, and great fun both on your own, and with others. When playing solo it does lack depth to both the storyline and character progression. The latter being the main problem, as there is none. It would have been nice to have some custom options that allowed me to improve my player, and the ability to unlock bonus items, but this never materialised. Also, if there were more specific challenges in each match that you faced, this would have mixed things up, and gave me something else to focus on. The multiplayer is just a glorious, stupid mess, that is a must if you purchase this game. There is nothing better than drilling a shot at your friend and watching them dazed on the floor as you dribble the ball past their helpless body.

This is an insanely crazy game that will make you chuckle throughout. It doesn’t take itself too seriously (how could it, its alpacas playing football), and it’s the perfect title to play casually. If you are a fan of sports, and fancy a change from the norm, then you won’t go far wrong with this little beauty. It’s brilliant on your own, and madness with friends online. Do I recommend that you buy this? Yes, I do. Who wouldn’t love a game about long necked creatures booting a piece of leather around a pitch? Grab your specially made hoof boots and aim to become the best football player the world has ever seen.

Football games have long been dominated by FIFA and PES, its time for a new king to take that throne. Alpaca Ball is fast-paced, and hilariously funny.