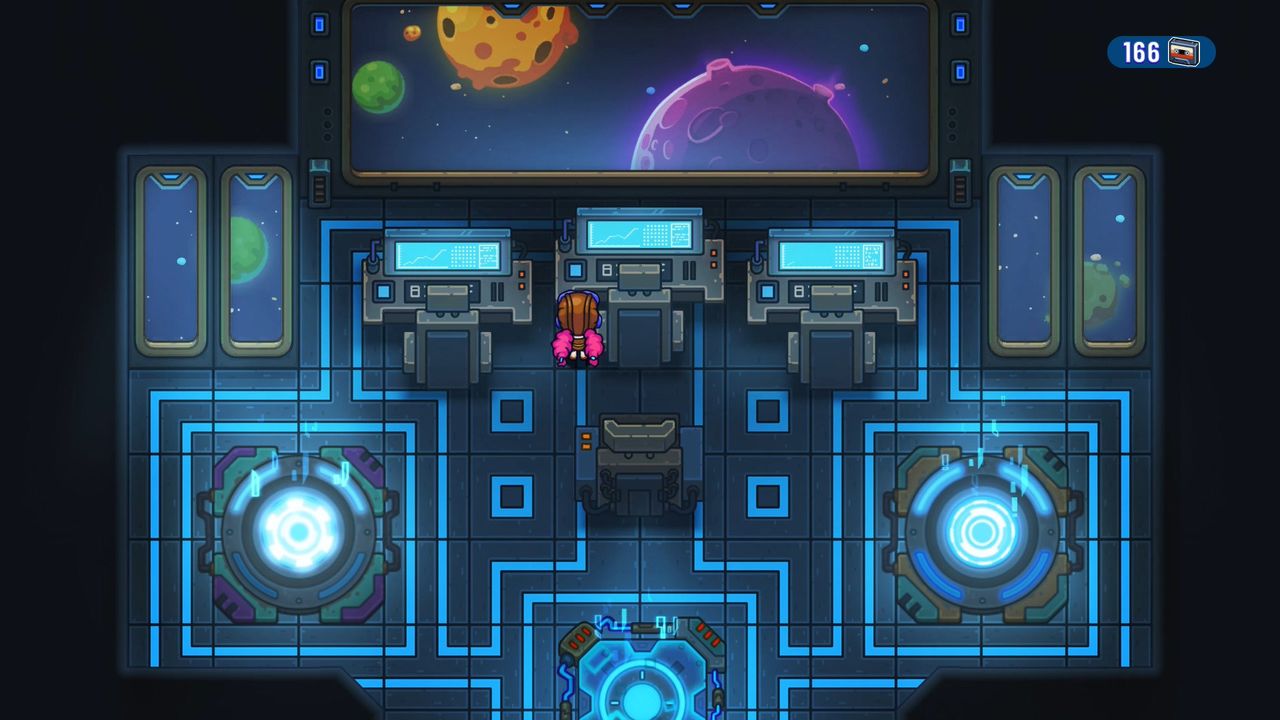 Playing through the many, many roguelite games available on the Nintendo Switch is sort of like becoming an absolute gaming junkie. It was already insane enough contesting with the Steam marketplace and the hundreds of new games that seem to spawn every week, particularly when indie devs are involved. Now, thanks to the world of portability, I have no fewer than three hundred games CURRENTLY on my Switch, with about twice that having been played and deleted because, hey, a 512GB card can only hold so much. But my passion is roguelites, particularly twinsticks. Now, this is a hard environment to try and launch a new roguelite on, because there have been so many fantastic titles already that all bring something different to the table. From Gungeon to Isaac, Hades to Dead Cells, Blazing Beaks to Relic Hunters and even further, the choices are endless. Yet Sparks Games, with help from CIRCLE Entertainment, has the stones to step up to the plate and announce their single or co-op top down roguelite is ready for the Switch, and that’s borderline admirable. The fact that the game is mostly enjoyable is certainly a plus, but players beware: the kinks aren’t quite ironed out yet.

Metaverse Keeper is a twin stick roguelite with very recognizable and easy to follow story motes. There is a metaverse, all universes are connected, and it thrives and sustains through energy. That’s Energy with a capital E, so you know it’s important. Some evil jackanape is turning Energy into a different thing, I think called Fel, which makes them more powerful and makes all of the metaverse unstable. The Council, a group of cloaked people in charge of everything, need heroes to come and put a stop to this menace through brute force. Across a handful of levels you’ll run, dash, shoot and smash in order to put things right, but a few of you decide not to help out until conditions are met, like going two worlds without healing or using 30 bombs in one game. There’s as much plot here as you want to put on it, but we all know it’s the game mechanics that’ll keep you coming back for more.

It’s weird, because Metaverse Keeper plays a dangerous game from the beginning by having their store page describe gameplay as Binding of Isaac meets Enter the Gungeon, two very respected but very different twin stick roguelites. With Metaverse Keeper, I would say that the approach is tenuous, but the description is accurate. The level designs and progression are a bit more like Isaac, whereas the in game upgrades and necessity towards dodging is certainly a Gungeon trope. The biggest problem I have with these descriptions is that these titles rely heavily on twin stick, and Metaverse Keeper is single stick. This means all aiming is done automatically through proximity, which means you need to rely on autoaim. To be fair, the autoaim is adjustable from light to full to close, but there’s no turning it off. You gotta go old school rules and fire in the direction you’re moving, which personally is a massive turn-off for me. Strike one, but it’s still early in the game, so let’s not check out yet. 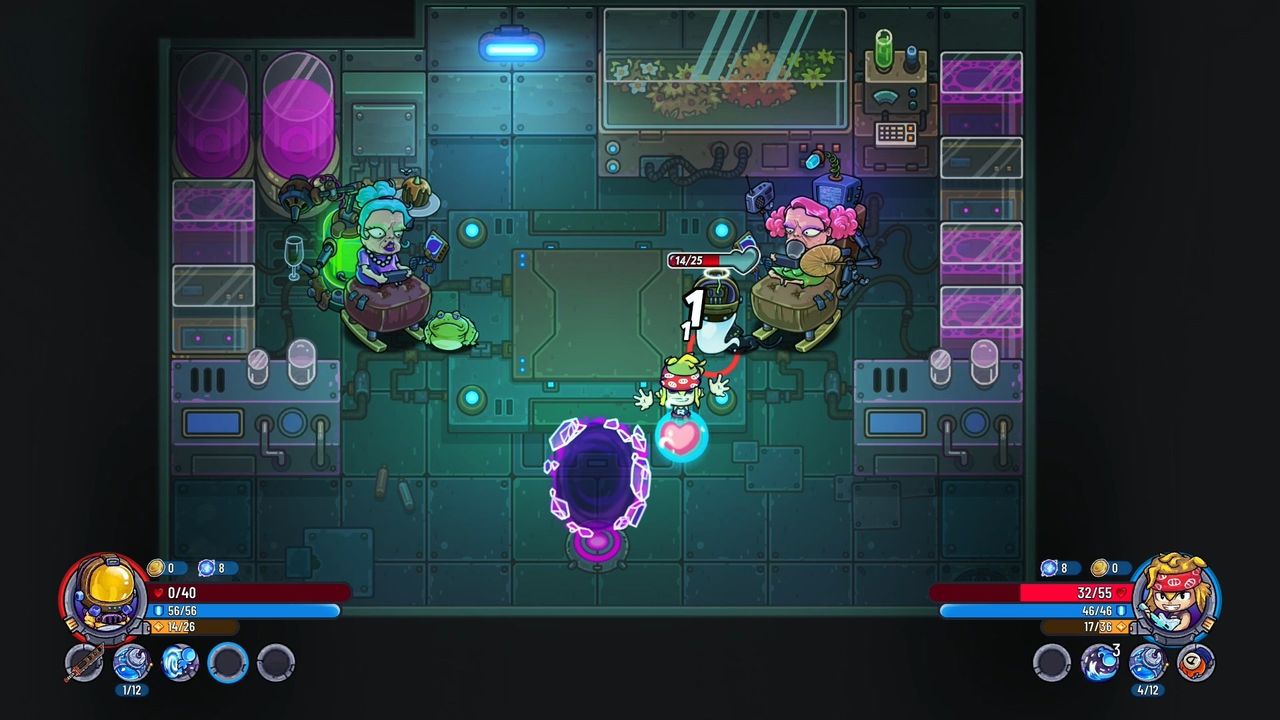 Most of the other control approaches for Metaverse Keeper are straightforward. You fire with Y, use a secondary, cool down attack with X, dodge dash with B and confirm things with A. Each secondary attack is different depending on the weapon, with some being supremely more helpful than others. The butcher’s knife allows you to go gigantic and have a much larger reach temporarily. Some swords give you a 3 second invincibility shield, which is awesome. I personally liked the leek sword that raised a massive ring of leek spikes from the ground to impale enemies. You also find items that word as a third way to attack with different options for each of those (throw a giant coin, hurl fireballs, auto replenish your bombs, etc.) and these use a different meter that recharges through finding orange crystals and killing enemies. Add in different dodge mechanics for each character and include hidden areas to find through bombing, and you’re sitting pretty on game comprehension.

For the good, Metaverse Keeper really knows how to lure in the target audience. The levels are all well crafted with clear differences, with plenty to be found and unlocked through exploration and patience. Beside the aforementioned extra heroes that are gained through perseverance, there are passive perks unlocked through discovery and grinding. You have two currencies in run (coins and spheres) that purchase weapons and weapon upgrades (coins) and purchase in run enhancements (spheres). Upon completing a run through death or success, you’re awarded cassette tapes that can be exchanged on the skill tree “Blueprints” or improving the upgrade chips through the Upgrade Depot. You’re always finding more upgrade chips to swap in and out, and a character can truly get crazy powerful with the right finds and the proper exploration. Hell, once you unlock Dr. Marcus or whatever his name is, you can get a free chip right on spawn, ensuring a strong start if nothing else.  Even after this review is finished, I’ll be going back to find more items and unlock even more within the game.

Additionally, there’s a lot of success in simplicity. The character designs of Metaverse Keeper are cartoonish, but recognizable, with each of the heroes having their own unique style plus abilities and the enemies all having less detailed avatars but apparent and singular attack formations. You quickly recognize that the more childlike colours and forms only bely the fact that you’ve got explosive slimes, speed dashing mutated cats, plant robots that can confuse you and plenty of other evil nonsense to deal with. I loved that there were challenge rooms where you need to fight off waves of stronger monsters to ensure finding a rare type weapon, and the bosses are, shockingly, formidable. Each boss does ask that you get “good” about the dash mechanic in order to survive, and, in spite of a short game setup (initially only about four levels), you’re in for a fight all the way through. Victory nets great rewards, and you eventually find weapons that you love and gravitate towards. That’s a good hallmark of a roguelite: plenty of variety with opinionated choices for “best” weapon.

Having said all that, there are some critical flaws to Metaverse Keeper that might be overlooked now that it’s on the Switch. Over in Steam land, the game is still marked as Early Access: meaning you accept that there will be bugs and that the devs will be able to patch it as fast as they can. Now that it’s on Switch, CIRCLE will need to negotiate with the QA department of Nintendo to get patches out, and it could be weeks or longer if something drastic happens. For example, in the third world, there was one particular enemy fight where my screen kept freezing. Like, the whole game just kept stopping and I had to wait a couple of seconds before I could keep fighting. I have no idea if this was a stylistic choice or something, because it didn’t happen again in other rooms, but this one location could have spelled doom for my run, and it didn’t feel like it was some kind of organic enemy ability. 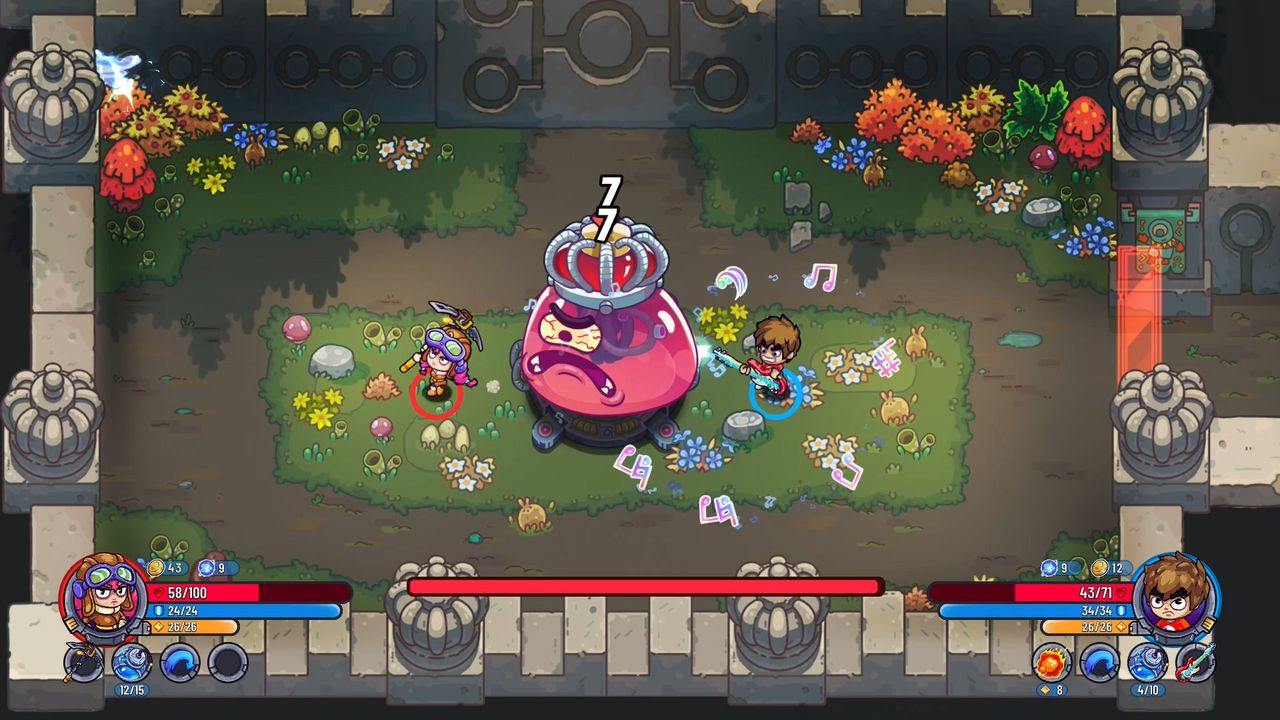 Additionally, the game feels SO slow when you’re dashing, and the dash/dodge has a cooldown timer, like everything else. The result is that most of your Metaverse Keepers walk like they’re trudging with heavy backpacks, which brings down the speed of a game that should feel like you can blaze through it after a few runs and understanding of the game. The slower pace meant that I had time to reflect on the room designs and realize that the different blocks of each level, while varied in contents (treasure chests, enemies, upgrade machines), looked very similar and bland. I’m sure the same is true for other roguelites, but I’m too busy burning through enemies and praying for health to care about it. The slower pace brings attention to things I might otherwise not notice or care about.

Lastly, and this is just an observation, but the 8-bit gun is BROKEN. It’s this little, retro-style pistol that has a secondary attack to summon a small drone to help you out a bit and fires three shots in quick succession for plinking damage. However, there’s a chance that it will trigger a massive critical hit that does 666 damage, which is cute and all in concept. In reality, players need only to keep their feet moving in order to destroy bosses with this gun. I got an 8-bit gun on my third run and successfully made it almost to the end, in spite of not really knowing what I was doing. The ratio of shot to successful 666 is really high, in my opinion: it landed twice on the third boss and took it out (the massive, stomping metal foot) before I could even register if it was a threat or not. Maybe I’m just lucky, but I’m not in the market for a game that rewards luck: I need a game that rewards skill.

Metaverse Keeper is addictive and has a lot of fun points about it. I love that there’s plenty of single player action, and that co-op is available for both local and online, which is perfect in the current climate. There’s a lot to see and do, and plenty to unlock and enjoy. I sincerely hope the bugs are ironed out more than I think they are, and that my glitch was one that others haven’t experienced (or that I’m inept and the glitch was on purpose). It doesn’t quite have the bite that could knock Isaac or Gungeon off of most players top tiers, but it’s entertaining, and that goes very far in a market of games that could be frustrating.

Delightful and engaging, Metaverse Keeper is a completionist’s dream for a roguelite, but fans of twin-stick will find some aspects lacking in the control area.