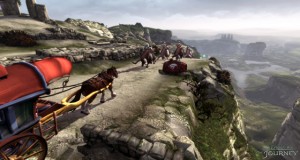 While pretty much everyone else and their mother has been getting stuck into the likes Halo 4, Assassin’s Creed III, Most Wanted or perhaps one of the many kart racing games that seem to be inexplicably flooding the market this holiday season, I, for reasons that even I don’t truly understand, have found myself playing through, and perhaps more importantly, thoroughly enjoying, the much maligned, Fable: The Journey….well, mostly anyway.

I know….what a time to delve into Kinect, right!? Yeah, I don’t get it either, but for whatever reason, it has happened and, for the most part, has proved a highly enjoyable experience. Maybe I can blame The Gunstringer. Yeah, I’ll do that.

See, I’ve owned Twisted Pixel’s, The Gunstringer for months and simply never got around to playing it. Recently, the urge struck me (what a wild card, aye), so I banged it on and, yeah, it was pretty great; the art design, that unique, somewhat kooky, sometimes overbearing but always amusing use of Twisted Pixel’s staff (they really need to learn how to act) and its simple, but highly amusing mechanics all combined to create an arcade styled shooter that worked perfectly well within the confines of Kinect’s capabilities. The thing is, as good as it is, the use of a reticule, although wisely implemented, meant that it never felt like the Kinect game that I imagined in my head when the tech was first announced. The Gunstringer, for all of its positive design, could be played with a dual stick controller….Fable: The Journey though? Now that’s a proper Kinect game.

Whether it is a truly on-rail experience is probably better left for another blog, but in terms of its core mechanics, this was the first game that, not only did I not see working with a traditional control scheme, but one that I absolutely wanted to experience using Kinect. Well, I say that, but in truth, what I really wanted was Kinect 2.0. For the vast majority of Kinect games that I have played, with the exception of a few sport and party games, I have consistently found myself yearning for the accuracy of a controller *cough – Steel Battalion – cough*, but in the case of, Fable: The Journey, I just wanted a more accurate Kinect. I wanted to wave my arms at the screen and I wanted to pull the reins on my horse…..I just wanted it to be more accurate. 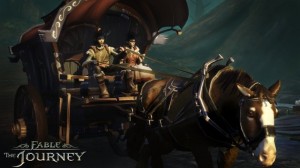 As great game as Fable: The Journey is (and it is great), it’s let down constantly by the lack of accuracy inherent within the Kinect tech, but as I said; rather than cursing the game or the concept, I, for the first time while playing a ‘core’ Kinect game, simply wished for superior Kinect technology. As far as I’m concerned, despite its limitations, Fable: The Journey works brilliantly as a proof of concept for Kinect. The idea is sound, and certainly preferable to the waggling of the Wii’s and Move’s of this world, and after playing Fable: The Journey, I know, without question, that I want Kinect in my gaming life…..just, you know, a better version of it.