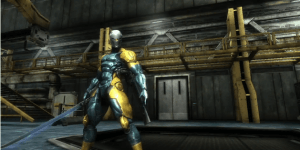 Metal Gear Rising is coming to the UK on February 22nd and in an attempt to drum up a wee bit of additional interest, Konami have confirmed that all European copies of the game will come boxed with a download code for an especially cool Gray Fox skin……just look at the picture…..look how cool it is.

Why this looks to be a European only bonus is beyond me, but being from the UK, I’m inclined not to give a monkey’s. Sure, he’ll probably still sound just like Raiden, but c’mon, it still looks awesome and hey, you’ll also get to use the signature Fox Blade. Good times indeed.

With Konami handling the story and Platinum Games on development duties, all signs are pointing towards a very special addition to the Metal Gear series and a chance for Konami to prove that Raiden isn’t such a whiny little bitch after all.