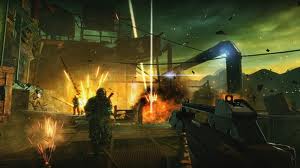 The fact that this hardly made a ripple in the gaming waters upon its release back in 2011 probably won’t fill the majority of gamers with confidence, but I implore you, if you’re a fan of first person shooters or have a proclivity towards arcade style gaming, Bodycount, especially at this super low price, is well worth a punt. Although a little too short on features and perhaps a tad too dumb to warrant the original asking price, Bodycount offers up a pleasingly simplistic take on the often po-faced FPS genre by taking the emphasis away from story, reason and enemy AI and instead, delivering little more than a token excuse to plonk you smack bang into the middle of a battlefield with a variety of brutally destructive guns at your disposal and an array of largely mindless cannon fodder all eager to take a bullet for the team.

Yes, Bodycount is dumb. Yes, the AI is worthless and yes, it doesn’t look half as good as many of today’s top tier shooters, but equally, it’s also great fun, has some of the finest weapons the genre has produced in quite some time and is home to a score multiplier system that is both unobtrusive and strangely addictive.

Bodycount isn’t the kind of game that you’ll play for months on end but the arcade aesthetic, great shooting mechanics and consistently high levels of destruction do make it a game conducive to quick fire bouts of highly entertaining gameplay. The finest compliment I can give it is that it feels like the kind of FPS Sega might have made back in the Dreamcast era; almost like a spiritual successor to the equally arcade-centric, Outrigger if you will. 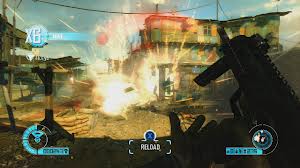 First person shooters have moved story to the very forefront of the experience in recent years – Bodycount by contrast is all about the shooting itself. The actual collection of guns available isn’t all that varied but the ones here really pack one hell of a punch. Devoid of the goofy sense of humour that put so many gamers off Bulletstorm, Bodycount offers up the far more traditional arcade experience, one that deserves to be experienced by as many gamers as possible…..oh, and if you need any more convincing, the Achievements/Trophies are easy pickings.

The surprisingly enjoyable, Bodycount for PS3 and 360 for just £4.