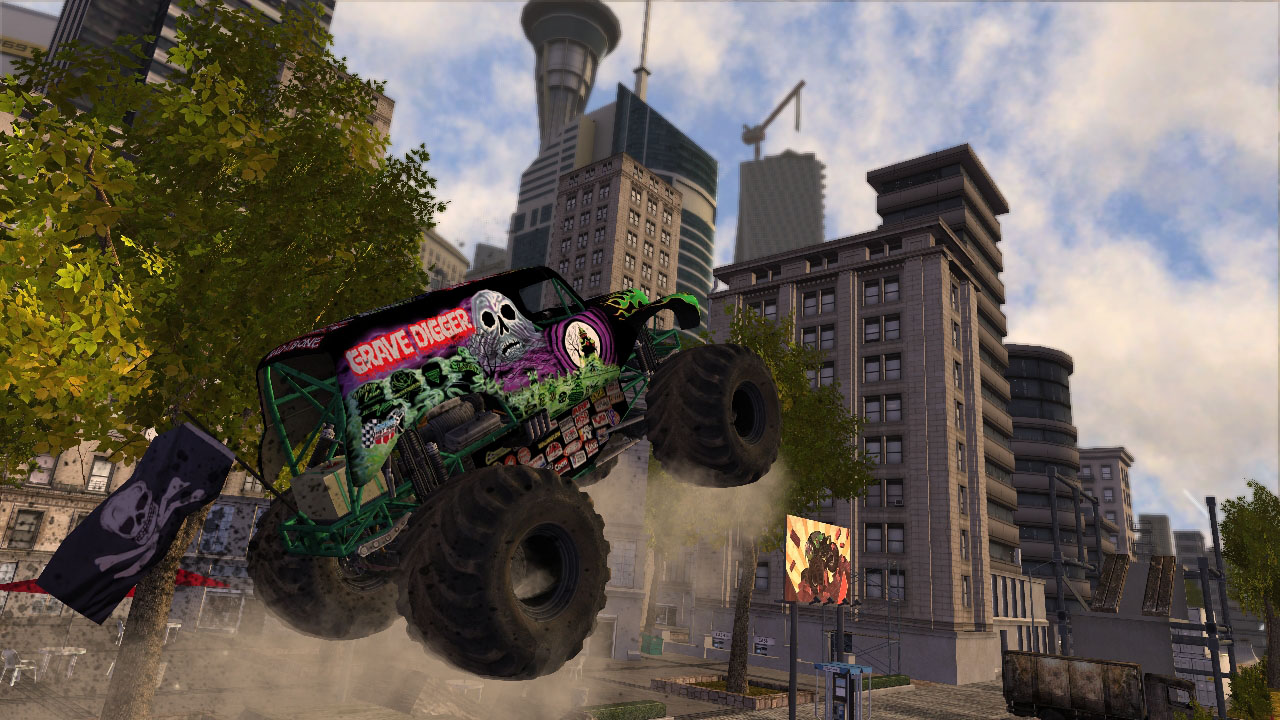 I have to admit that before playing this game I hadn’t actually heard of Monster Jam Battlegrounds, or anything else in the Monster Jam series for that matter. As a result I had no idea what to expect and went into the game both blind, yet somewhat enthusiastic. As the game loaded with the standard company logos and opening titles I felt pretty good about this review. The music was decent and the menu was nice and presentable, unfortunately this was about as good as things got.

Monster Jam Battlegrounds is a monster truck game that takes place across a wide variety of short events (normally between 30 seconds and a couple of minutes in length) rather than anything too substantial. Events are split into three categories (Skill Driving, Stadium Events and Stunt Mode), the majority of which will be locked initially until you begin building up enough stars. Stars are earned by beating courses in fast times, winning races and achieving other skill based objectives. The game is structured in such a way that in order to progress you need to do well in all three modes as you won’t earn enough stars to continue by just sticking to the one.

Graphically this title is presented in 3D with fully rendered models and terrain, however what is unusual for a driving game is that most of the events are controlled in a 2D perspective (think Excitebike on the NES). The graphics serve their purpose but they are nothing to write home about. The textures look a bit low res during close ups and I believe some sort of anti-aliasing filters may be in use to either upscale the graphics or disguise any shortcomings. I could be wrong but that’s certainly how the game appears on my TV.

The Skill Driving mode is essentially a time trial mode that plays in the 2.5D style. You begin at the far left side of a course and have to navigate your way over hills, dips and bridges until you reach the goal on the right. Rather than be able to steer left and right, you simply accelerate and break with some stiff mid air controls which direct the nose of your truck up and down. As you progress you can unlock alternative trucks (although these are purely cosmetic and their base stats are always the same). You can also purchase upgrades which grant you the ability to boost and “jump”, however even these upgrades do not add too much variety to the game play. 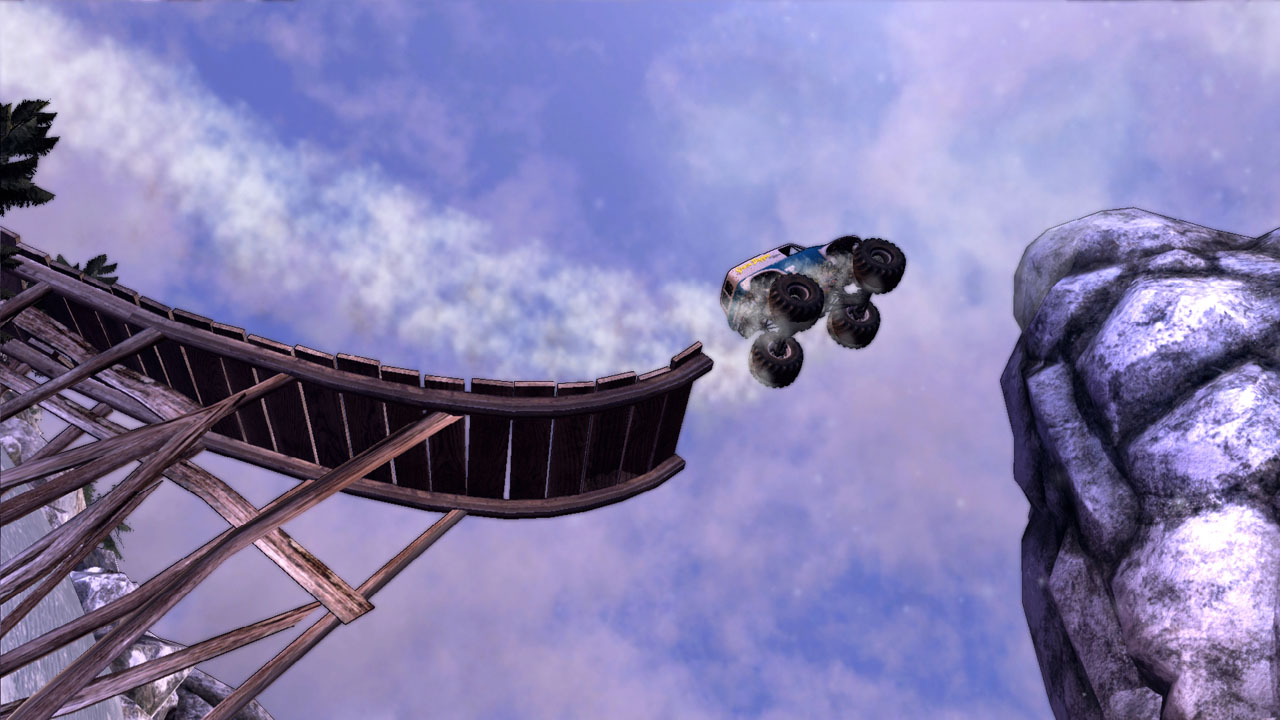 Stunt Mode is presented in the same style as Skill Driving and features the same types of locations (Mountain, Desert, City, Farm, Frozen), only instead of trying to reach the finish line within a time limit you are tasked with various different goals. These goals vary from long jumps, driving over targets, taking a specific path through the stage or a mix of the above. This mode seems to be the most substantial, as such I consider this to be the meat and potatoes of this game.

Stadium Events are essentially stadium races against an AI opponent. These are the only type of events with a full 3D perspective. During these races the camera is positioned directly behind the truck and you can actually steer left and right. Although this mode includes the most logical perspective for a driving game, it’s unfortunately the mode that is weakest in terms of game play. The courses are pretty vacant compared to the rest of the game and obstacles (such as speed bumps) are really dull. This mode is also really easy to exploit as it’s possible to drive around many of the obstacles so long as you don’t stray too far away from the track.

Despite the premise of this game being rather straight forward there are a number of problems which make it difficult to progress through. The first dozen or so events (mainly consisting of races and time trials) provided very little in the way of challenge despite the limitations with the controls. However, by the time I started the more skill based challenges (such as long jumps) I began struggling to score maximum points despite multiple tries. I was performing well enough to unlock more missions but I couldn’t work out why I was failing to reach the top targets. The problem was that when the only options for movement are accelerate or break (and a small amount of mid air control which is stiff to the point of being next to useless) there is very little you can do wrong, so what was I missing? Even after upgrading my truck to the highest level and jabbing away at the boost buttons I was still falling short. If there were any techniques that I was missing then some sort of hint or tutorial may have helped.

The worst example of this game’s controls actually occurs during the Stadium Events. During these events you race against the computer, however in order to stay in control of your truck you have to inch forward at an incredibly slow pace. Any attempt at putting your foot down usually results in the vehicle sliding around like wet soap on a frozen lake. I actually won a decent number of races by deliberately being gentle on the accelerator, but if there’s one vehicle that I expect to be able to regain control in any conditions a monster truck would be pretty high on the list. 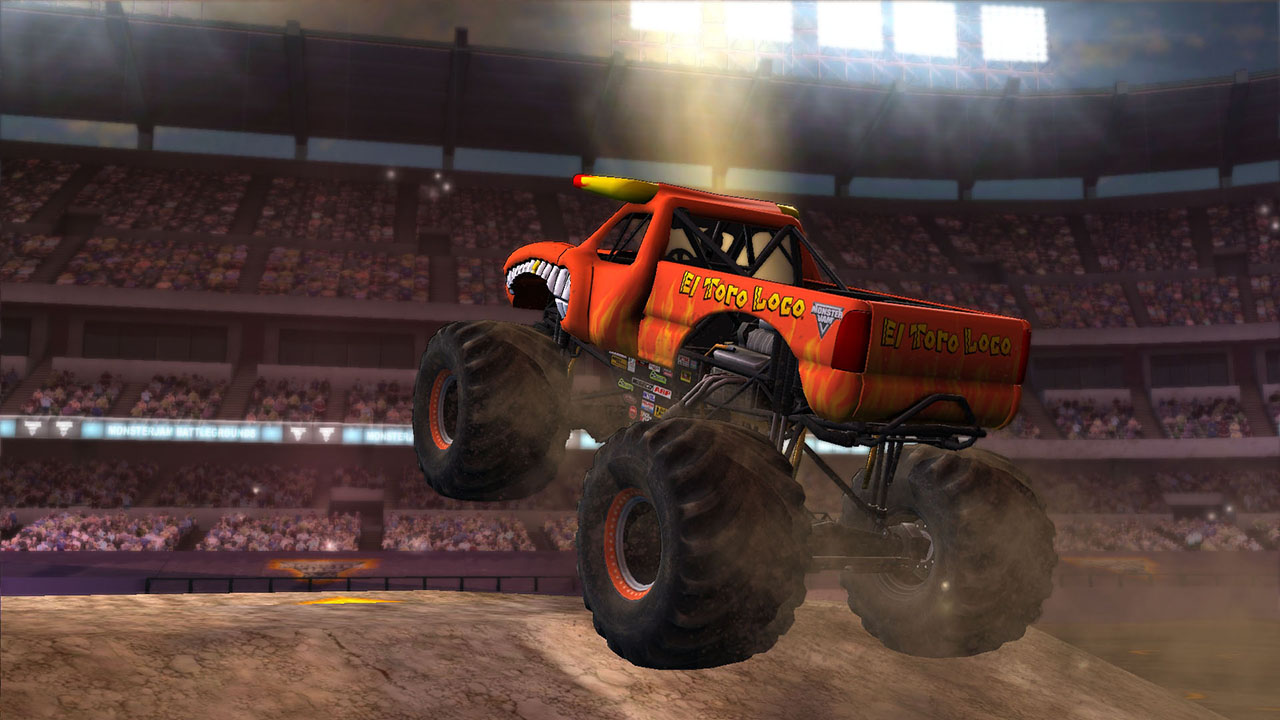 What stopped me from progressing in the Stadium Events wasn’t so much the slippery controls, but instead was some unusual glitching. It’s difficult to describe but while working through these events I stumbled across an issue where the game would drop frames. This isn’t unusual for a lot of games during moments when something demanding is happening and I can usually just play through it without a hitch. However, for some on reason during these periods of slow down I completely lost control of my truck. There were moments when my truck would move forward and moments when it would turn, but not smoothly and not at the same time. It was like trying to maneuver a tank. I got up to one event where this problem occurred so frequently that I just gave up on it in the end.

Despite these glitches I tried to stay enthusiastic and continue to the end, however what stopped me dead in my tracks was the game crashing a couple of times. The first time it crashed was as an event was beginning and my PS3 automatically restarted. Although this was a little annoying, no harm was done and I continued playing. Unfortunately this only foreshadowed further issues as around 3 hours into the game (about two thirds from the end) it crashed my PS3 again, only this time it wasn’t a soft crash. The game froze on a loading screen and I couldn’t exit the game in any way. Holding the PS button and even pressing the power button wasn’t doing anything. I had to resort to turning the power off from the wall socket which I’m pretty loathed to do as I think this can potentially cause damage to the console if you’re unlucky.

Overall, even if this game was stable, it’s still pretty boring and I can’t imagine what type of gamer would get any enjoyment out of it. In addition to the poor controls, crashes and £11.99 price tag I cannot recommend this game. It may be more stable on other platforms, but if you do want to try it please approach with caution.