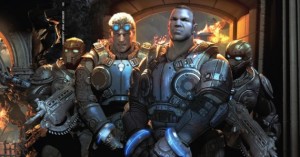 The characters are largely uninteresting, the levels short and the story, wholly inconsequential, but despite these issues, and in many ways because of them, Gears of War: Judgement might be the most fun that I have ever had with the series. By taking the rock solid fundamentals and removing all of the gruff emo crap that has slowly dragged the series down, People Can Fly have essentially created a Gears experience that is, despite its simplistic but wholly effective contextualising of events and challenges, all about the action, all about the mechanics, and in my opinion, all the better for it.

Baird feels like a bit of a non-event, the new cast members are forgettable and even a younger, sprightlier, Augustus ‘Cole Train’ Cole comes across as somewhat subdued, but in the case of Judgement, story and characterisation feel like additions added purely for series continuity sake. I get the impression that, if possible, People Can Fly would have removed the story almost in its entirety, thus leaving what Gears of War: Judgement essentially is; a pure arcade shooter. 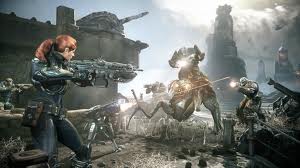 With so many long running series hitting a bit of a creative and artistic wall at the tail end of the generation, People Can Fly have bucked the trend by successfully refreshing the Gears template without making a single change to the fundamental mechanics of the series. By stripping away as much of the fat as is possible (or as was allowed by Epic / Microsoft), People Can Fly have created the type of streamlined, gameplay-centric experience that is so rarely found in the realm of triple-A gaming.

With its inspired scoring system, brilliantly implemented and smartly contextualised Declassified challenges and short snappy levels, Judgement successfully carries across everything that was great about the series while delivering a huge shot of adrenaline and a brilliant excuse to throw waves of enemies at you at every turn. Admittedly, Judgement is short on the kind of set-pieces and spectacle that set the numbered releases apart, but as an experiment in pure, moment to moment gameplay, Judgement has to go down as a resounding success. 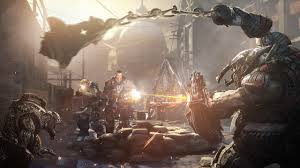 Watching as your star level increases in real time as your progress through the stage, fighting against the optional but wholly encouraged Declassified challenges, Judgement is a game that never lets you get into the kind of mechanical ebb and flow of combat that occasionally stole the numbered releases of their immediacy. Here, there is always a challenge, always something to aim for, something to kill.

It might not stick in the mind like Gear 1-3, you might even forget it in its entirety once it’s done, but while it lasts, while you’re there, knee deep in the Locust hordes, Judgement is an experience that will keep you as committed and absorbed as any game out there………oh, and the multiplayer is pretty great too.