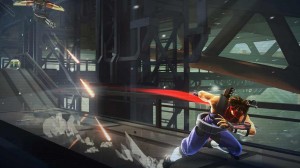 I loved the Strider arcade machine. Alongside Space Harrier and After Burner II, Strider was one of my favourite arcade games of the time. The home console releases on the NES and Megadrive too, while not in the same league as the arcade original, were still fantastic games in their own right; the fast paced gameplay, the art style, I loved it all. But heck, that was many moons ago and needless to say, it has been a long, long wait for a new Strider game. Sure, Strider Hiryu may have appeared in a handful of the Marvel Vs. Capcom crossovers and as a playable character in 2005’s, Namco × Capcom, but this gaming icon hadn’t appeared in his own game since the early 90’s.

So, as you can imagine, news of a current-gen reboot / reimagining was met with a fair degree of excitement on my part……that was until I heard who was developing the game of course. Despite, Capcom’s Osaka studio being involved in the project, the brunt of the development duties were to be undertaken by Double Helix Games. Now, I’m not here to attack Double Helix (quite the contrary), but based upon Capcom’s previous collaborations with Western studios and Double Helix’s questionable track record (they made the truly unremarkable G.I. Joe: Rise of Cobra and the equally poor Battleship tie-in), I found my initial excitement understandably dulled somewhat. 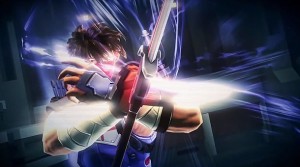 Should I be that shocked though? Sure, Double Helix developed two poor movie tie-ins, but then, they also made the really rather enjoyable Silent Hill: Homecoming and the surprisingly brilliant, Killer Instinct. Was this just another story of an otherwise very talented team being dragged down by the constraints and time restrictions associated with movie tie-in video game development? It’s certainly starting to look that way.

Even if you take Silent Hill: Homecoming and Killer Instinct out of the equation, Strider alone points towards a development house with a great deal of internal talent. Now, I don’t know what level of involvement the Capcom Osaka Studio had, but the fact remains that the final product, a final product that will have been largely delivered by Double Helix, is absolutely fantastic.

And that’s what it really is. Not decent, not good, but flat-out, unmistakably brilliant. I know the reviews have been pretty decent across the board, but many have been, while generally positive, decidedly tepid. That of course is fair enough. Each to their own and all that. But honestly, other than the art design occasionally falling a little on the bland side (which is hard to excuse given the source material), I can’t imagine a more successful reboot of this much loved classic.

By combining the classic Strider gameplay with the oft used Metroidvania template, Double Helix have once again made Strider a truly relevant franchise. Of course, saying that makes it all sound so simple, like Double Helix have just mashed these decidedly disparate styles of gameplay together and hoped for the best. Metroidvania games are traditionally rather slow paced affairs with the genre in complete contrast with the high-speed combat that Strider is famous for, but by simplifying exploration, keeping the pace high and delivering unlockables that keep both the combat and game world consistently engaging, Double Helix have delivered a game that is somehow balanced perfectly between these two contrasting styles of gameplay and have subsequently created something that feels simultaneously new and familiar. 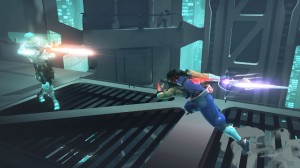 Of all the recent reboots and reimaginings, Strider has to go down as one of the most successful. It maintains the spirit of the original games while framing it in a way that makes it both relevant and desirable to modern gamers. Despite my minor grievances with the occasionally uninspired art design, Strider nonetheless stands as one of my favourite games of the past year and a sure sign that Double Helix are a team to keep a close eye on.