Usually when you hear that a Wii game is graphically fantastic, it’s usually followed by the caveat ‘for a Wii game’. Thanks in part to this generation’s surprisingly long retail run, developers are pushing the boundaries of the 360 and PS3’s graphical capabilities further and further, while the Wii, with its relative paucity of processing power, is being left further and further behind. 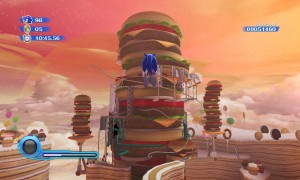 Of course, the soaring HD TV adoption rates don’t help matters either – with such a large percentage of the population now eager to receive all forms of entertainment in crystal clear high definition, the standard def Wii is starting to look decidedly long in the tooth. Still, it’s amazing what can be achieved with some inspired art design and a talented team of developers. Although Sega has done some pretty impressive graphical work on the Nintendo Wii in the past, Sonic Colours crisp graphics, imaginative art design and impressive attention to detail make it Sonic Team’s most accomplished work on the console to date and the best looking Wii game since Mario Galaxy 2.

I know, I know, graphics haven’t been the issue with 3D Sonic games – regardless of the console, they’ve all tended to look rather good. Problem is, as I’m sure you’re all aware , they’ve all tended to be rather pants too: unnecessary characters, poorly implemented twists to the core gameplay, terrible cameras – 3D Sonic games have become somewhat synonymous with disappointment in recent years. Still, Sonic fans are a surprisingly optimistic bunch and as a long suffering Sonic fan myself, I’m happy to report that Sonic Colours actually manages to buck the trend by matching its consistently fantastic presentation with arguably the most enjoyable, polished and downright fun gameplay that the series has offered since Sonic & Knuckles back in 1994 – and yes, that does include this year’s Sonic the Hedgehog 4: Episode 1.

The other big surprise is that the story, usually another major weakness of any Sonic title, is actually pretty decent….well, by Sonic standards anyway. Although clearly aimed at the younger player, Sonic Colours’ story, delivered by an all new, decidedly less annoying voice cast, is nonetheless a decent little tale revolving around Eggman’s apparent attempts to turn over a new leaf by building a fantastical amusement park in outer space (as you do). Of course, being Eggman, it all turns out to be another crafty ploy for world domination. By chaining a collection of planets and harvesting the power of the alien Wisps, Eggman plans to….well, I’m sure you can guess the rest.

The important thing is that each world essentially represents a zone, thus providing Sonic Team with something of a blank creative canvas. Although the usual Green Hill and Casino inspired level are present and accounted for, it’s the unique Sweet Mountain and Starlight Carnival levels that really capture the imagination. Be it sprinting through a world built of food or tearing down a track made of light, the consistently high level of invention on show rarely ceases to amaze.

It’s not just the visual design either. By reducing the pace of gameply in Sonic Colours (don’t worry, it’s still fast), Sonic Team have freed themselves up to deliver a collection of surprisingly refined, carefully structured levels that encourage multiple playthroughs. In fact, some of the level design is so bloody good that it’s hard to believe that it was created by the same Sonic Team who thought turning Sonic into a werehog was a good idea. For a development team that has been delivering sub-par Sonic games for over a decade now, it’s surprising just how good much of Sonic Colours actually is. 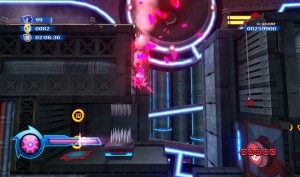 Adding to the game’s already stellar controls, pitch perfect physics and fantastic level design, is the introduction of Wisp powers. I know a lot of gamers will inevitably approach any addition to the core Sonic gameplay with trepidation but unlike previous attempts to broaden the appeal and gameplay mechanics of the Sonic franchise, this one actually works.

Different coloured Wisps provide Sonic with a unique set of powers and although each power is linked to a different zone, the chance to re-play levels later on with different powers opens up the game’s magnificent level design and multiple routes. Be it the blue Wisps that turn Sonic into a lightning bolt, the yellow Wisps that give Sonic the ability to drill through soft ground or the white Wisps that give Sonic even greater speed, the fact is all 8 unique Wisp powers work exceptionally well, with each providing an interesting twist to Sonic’s core abilities.

Using a traditional control method with ‘waggle’ only used sparingly for Wisp powers, Sonic Colours feels tight and responsive in both the slower paced, explorative 2D sections and the lightning fast 3D sections. Be it an attempted speed run or a careful exploration of every nook and cranny of a level, Sonic Colours’ tight control scheme and exemplary physics make playing the game either way a complete joy.

Sadly, as great as the large proportion of gameplay is, a few hugely annoying difficulty spikes do their very best to ruin the otherwise stellar experience. With progress only possible upon the completion of all levels within a zone, these difficulty spikes have to be played through and, as such, are all the more annoying. I wouldn’t mind if these parts of the game were simply challenging, but like aspects found in far too many of the previous 3D Sonic outings, these moments feel cheap and dictated far too often by luck rather than skill. 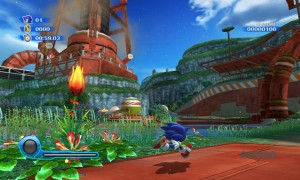 The only other gripe I have is that the game’s co-op mode simply isn’t any good. Sharing a screen with another Sonic does not work and, thanks to a raft of accidental deaths, quickly descends into something of an infuriating experience. Luckily, the co-op challenges which are unlocked by collecting red rings found throughout the single player story can be mercifully played solo. Not only does this give players an extra incentive to go back and fully explore levels and re-play worlds with different Wisp abilities, but it also adds longevity without the need to have a buddy on board who is more likely to nudge you off a cliff than help you out.

It’s bizarre to think that Sonic Colours, a 3D release on the supposedly inferior Wii, would outshine the much vaunted Sonic the Hedgehog 4, both in gameplay and presentation, but that’s exactly what has happened. I’m not knocking Sonic 4 by any means; it’s just that, while Sonic the Hedgehog 4 feels like a throw back to Sonic’s past glories, Sonic Colours represents a look at the series future. Not only is Sonic Colours the best 3D Sonic game by a country mile, it also happens to be one of the very best Sonic games full stop.