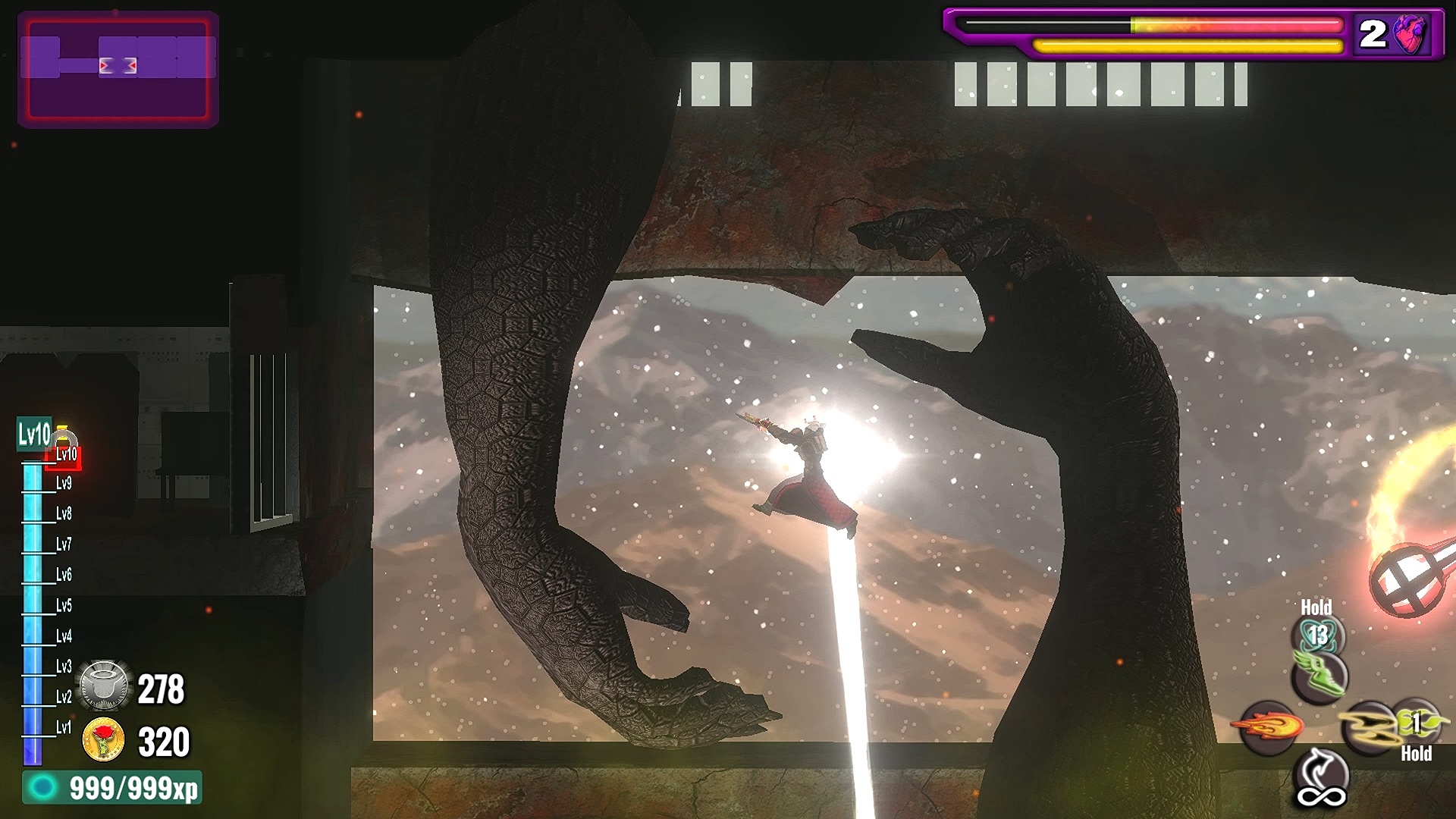 Wouldn’t it be nice if we could gather up all the politicians and organisations that have become slaves to the system and cart them all off to jail? Well, in EnjoyUp Games’ latest release on the Nintendo Switch, Final Light, The Prison, that’s exactly what has happened. However, it’s now your job to offer them redemption in this metroidvania style, rogue-like game.

The story revolves around the Prison S-313, a dark establishment that was built in 1968 in a secret location unknown to mankind. It was built, along with a series of other secret prisons, by a group of powerful men under the pseudonym ‘Black Butterfly’. In it, were housed the politicians, spies and inventors who rebelled against the people in control of the world. Behind its walls, its prisoners were to succumb to the darkness within and a madness of incomprehension befell them all. Subjected to cruel barbarity, many of these prisoners perished, where to this day, their spirits remain trapped within its walls.

S-313 is now a ghost prison, where everything that happened in the past still remains there. It is now your objective to infiltrate the walls of the prison and free the torturous souls that are trapped within. Your character is a mysterious being, hidden behind a mask and shrouded within a blood red cloak; his hands protruding two long blades. There’s a very supernatural feel about him, as there is within the walls of the long-forgotten prison. It’s a very dark, desolate and extremely hostile environment inside. However, the game is far from that. 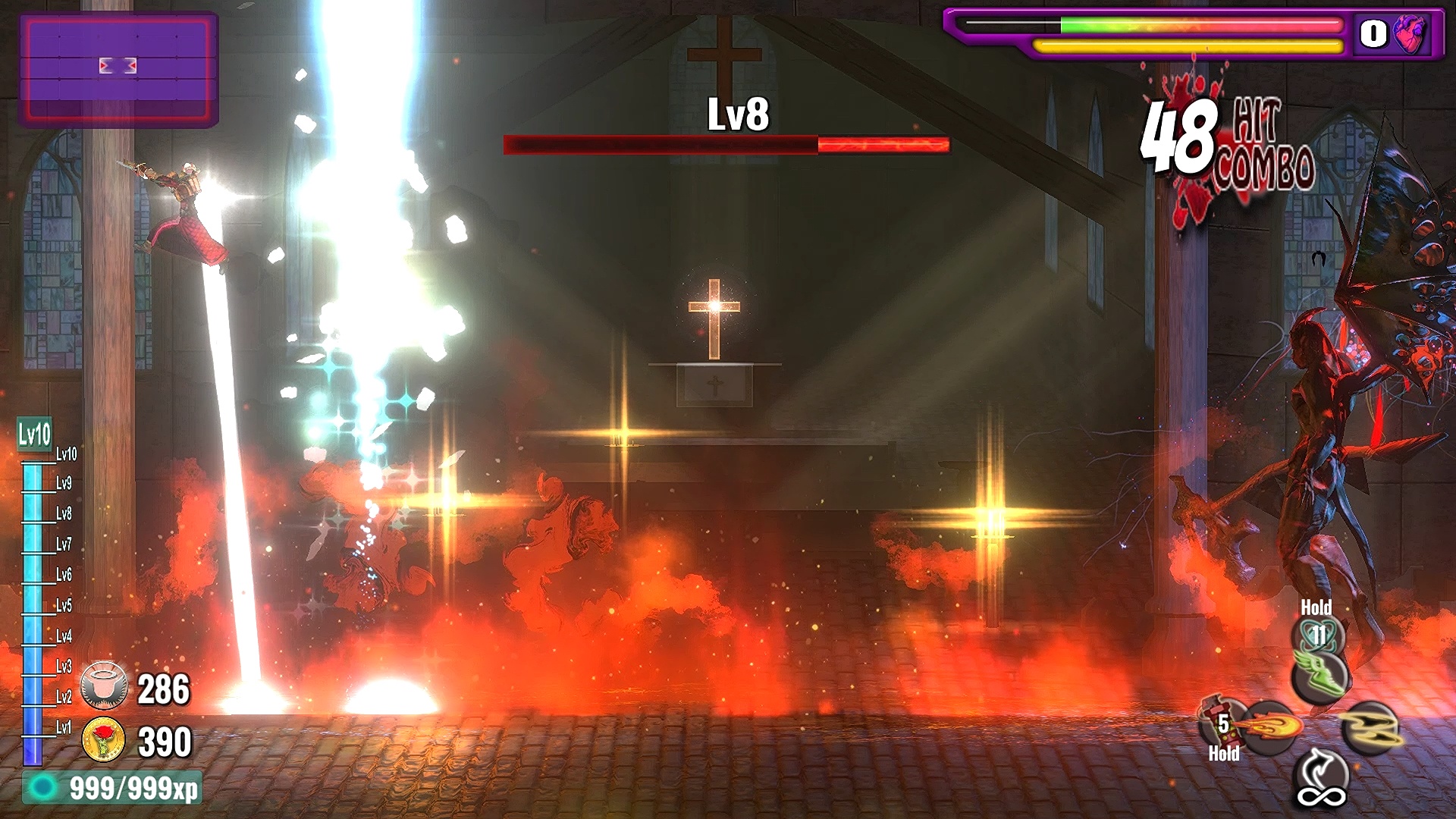 Its main premise follows that of a 2D platformer, but also contains a whole host of other features such as levelling up, virtual stores, tests and a rogue-like element that presents you with a choice. The whole aesthetical presentation is one that promotes a sense of claustrophobia inside the walls of prison S-313. In an almost silhouette style of visuals, each room is highlighted whilst the surrounding area remains dark and gloomy. Everything is run-down and decayed and the game gives a good representation of that.

Each level begins with your character walking through the door to the level and it’s your job to find the exit in order to advance to the next stage. However, what lies within the rooms of your current level remains a mystery and you must overcome its many obstacles to succeed. Some floors may contain nothing at all, others will house all sorts of twisted figures or elements that can help in combatting the horrors that lie within.

With your blades, you can perform a slurry of slashes that can make short work of anything that stands in your way. However, along the way you may find barrels that can be destroyed; each one housing a token that can be collected to purchase upgrades and buffs at certain points when the in-game store is revealed. From here you can equip all manner of weaponry from shields to lasers, grenades to flame throwers; all of which pack a very powerful punch. Some of these may be limited, whilst other remain with you throughout the course of your adventure.

Part of the fun with this game is the exploration of the unknown. With its rogue-like capacity, the game creates a prison from the seeds of code that it starts with. However, should you reach a grisly demise, the game presents you with a very smart choice; either play through again with the same seed, thus giving you the option to learn your environment in the hope of progressing further, or create a whole new prison by using a new seed to spawn a series of whole new levels. It’s a very clever mechanic and one that offers a near-limitless amount of playability to the title.

There are also other areas within the game where you are presented with choices. At some points, the game offers you a test. Choose to partake in its offerings and you will be rewarded. However, you can also choose to skip whatever the game has in store for you and carry on with your quest. It’s an element of the gameplay that is full of mystery, much like the core elements of the whole game itself. Everything is mysterious and dark. There’s an unknowingness about the task before you, which presents quite an unsettling feeling in its execution. 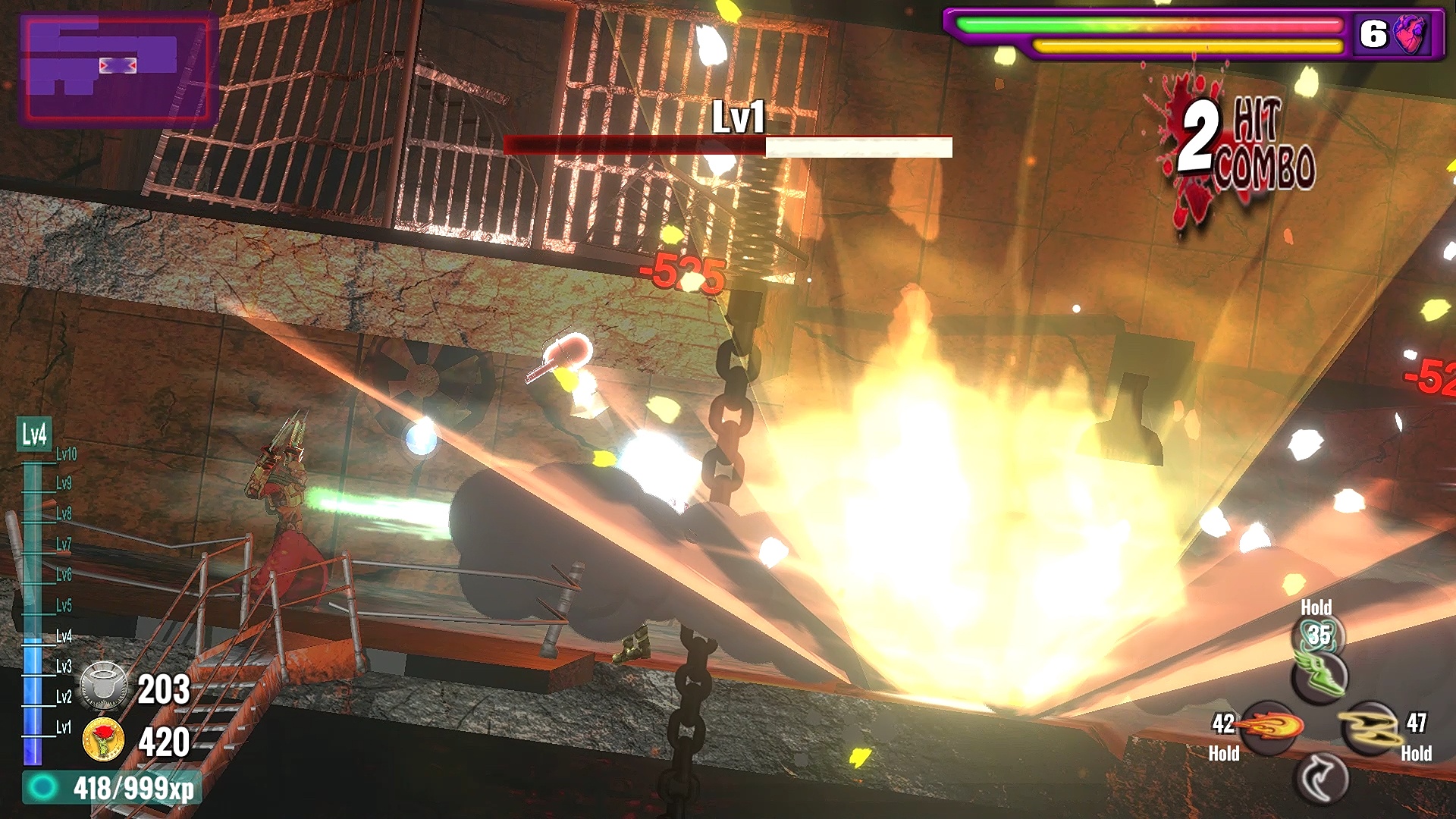 To help you traverse the forbidden interiors, and exteriors, of the prison, you are also equipped with a jetpack that can help you reach the higher planes of levelling, or skip over the deep, spike-infested chasms that litter the prison floors. Your life is represented by a meter that slowly declines when you take any form of damage; whether it be from hostile beings or from one of the many environmental dangers that surround you. Once the meter is depleted, you are dead. However, you also have the option to revive yourself, up to a maximum of three times unless you purchase more, where you can continue from the level where you left off. Should you wish to decline your continuation, then you are dragged down into the depths of hell.

In order to help you traverse the prison, the floors of each level are littered with red flowers, which when picked up, fill up an attack meter that allows to pull off your special moves, such as the flame thrower or laser barrage. These can also be used as a guide as to where you need to go next within the darkness that envelopes you. Defeated enemies and collected souls award you with XP, with fills another meter showing you your current experience level; the higher you fill it, the stronger you become. Its mechanic adds a sense of playability to the title, as it pushes you to advance further, or to keep playing the game, as the stronger you become, the further you can advance. However, be careful of the many bosses that roam within the walls. They present you with a serious challenge, but one that is never impossible; although at times, it may feel like it.

Despite its unsettling atmosphere and dark environments, Final Light, The Prison contains that magical element that forces you to keep playing. It possesses a large variety of obstacles and enemies, as well as an ever changing amount of scenery, whether it be the foreground or background; some of them being particularly hypnotic in their execution. If you’re a gamer who is prone to epileptic episodes from flashing imagery, then this is probably a title that I wouldn’t recommend you play. It’s devilishly fiendish in its design and is a game in which you’ll die, a lot; but with perseverance and power, you’ll find yourself advancing further into its nightmares the more you play it. Its rogue-like elements aren’t too punishing either. You don’t lose your advancements in XP and the game always gives you the choice of what seed to use in the prison’s construction. Its may be a dark place within the prison’s walls, but it’s far from being its final light, as its lure in keeping you locked within shines very brightly indeed.