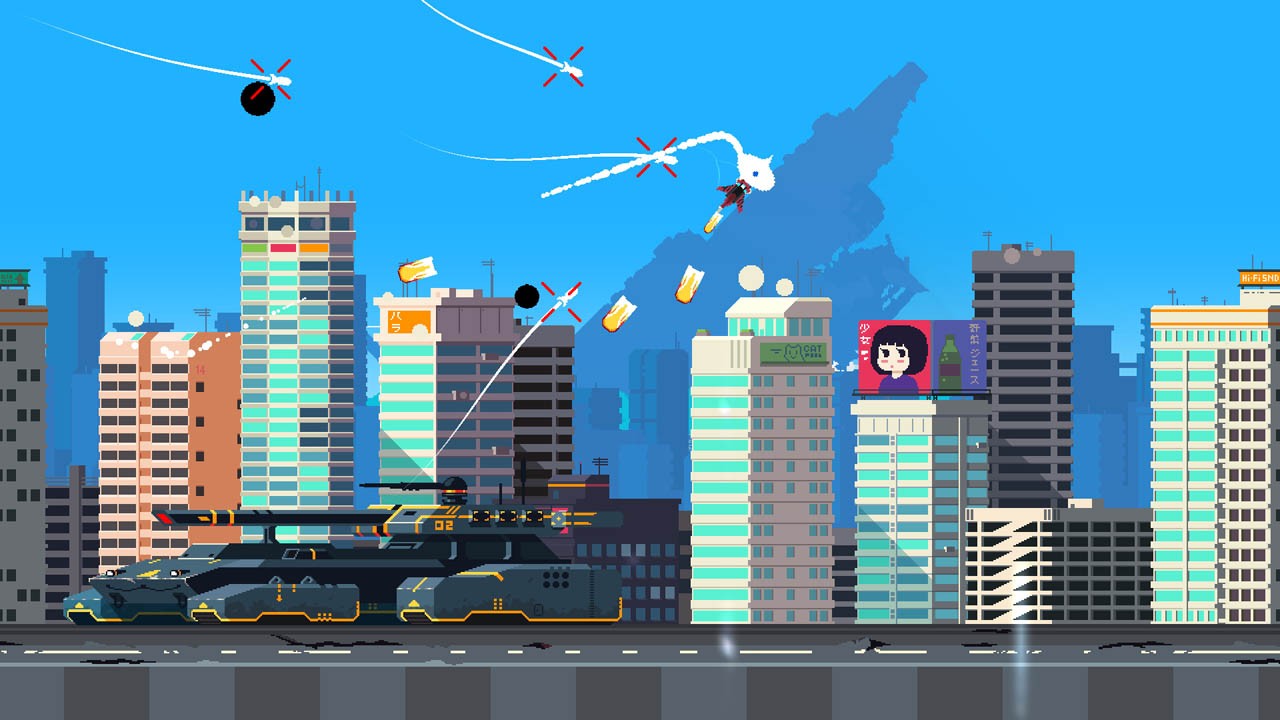 The origins of the good, old-fashioned shoot-em-up, or shmup as they’re more commonly known as these days, can be traced back to the flashing lights and coin-dropping lures of the arcades. Their bullet-hell ridden screens and evasive manoeuvres made for a good template; forcing us to part with our pound coins or dollars to feed our frenzy of ‘just one more go’ and personal glory within the crowd huddled cabinets of our youths. However, for me personally, their transition to home gaming has never quite held the same level of addictiveness. Sure, there’s been some great titles over the years and some very playable games, but in terms of their appeal, only offer a limited scope in their long-term. I’ve found that more, modern shmups need to deviate slightly from their original templates, offering something new or different to build upon, something that Vladimir Fedyushkin, Nikolai Danielson and Armor Games Studios have managed to achieve with Jet Lancer, as it roars a release onto the Nintendo Switch.

Primarily a shmup at heart, Jet Lancer plays in a similar style to other 2D shooters such as Luftrausers, Rogue Aces and the arcade classic, Time Pilot. However, it also adds to the template, with  a story-driven narrative, armament loadouts and a novel level selection process. The game takes place within a post-apocalyptic world, where you play as ace pilot and mercenary for hire, Ash. From aboard your carrier, you take possession of a prototype jet fighter, as you embark on a series of mission sorties against a band of sky pirates to bring peace and prosperity back to the world. Aided by the Royal Air Force and Royal Navy, you’ll take part in a series of missions, either alone or assisted, that sees you dominate the skies, hack radio towers, dive land and sea targets and take on a series of overpowered and oversized, robot bosses.

The basic premise of the gameplay involves flying your fighter around a variety of landscapes, using your left-con to rotate around a central axis, as you fire your engines with Zr, afterburn with ZL, shoot your guns with A, launch and charge missiles with L and take evasive actions with B. It runs on a very satisfying control scheme, one that is immediately easy to pick up and play, as well fly a trajectory that is silky smooth in application, as you dive, climb, thrust and rotate with skilful and satisfying piloting. 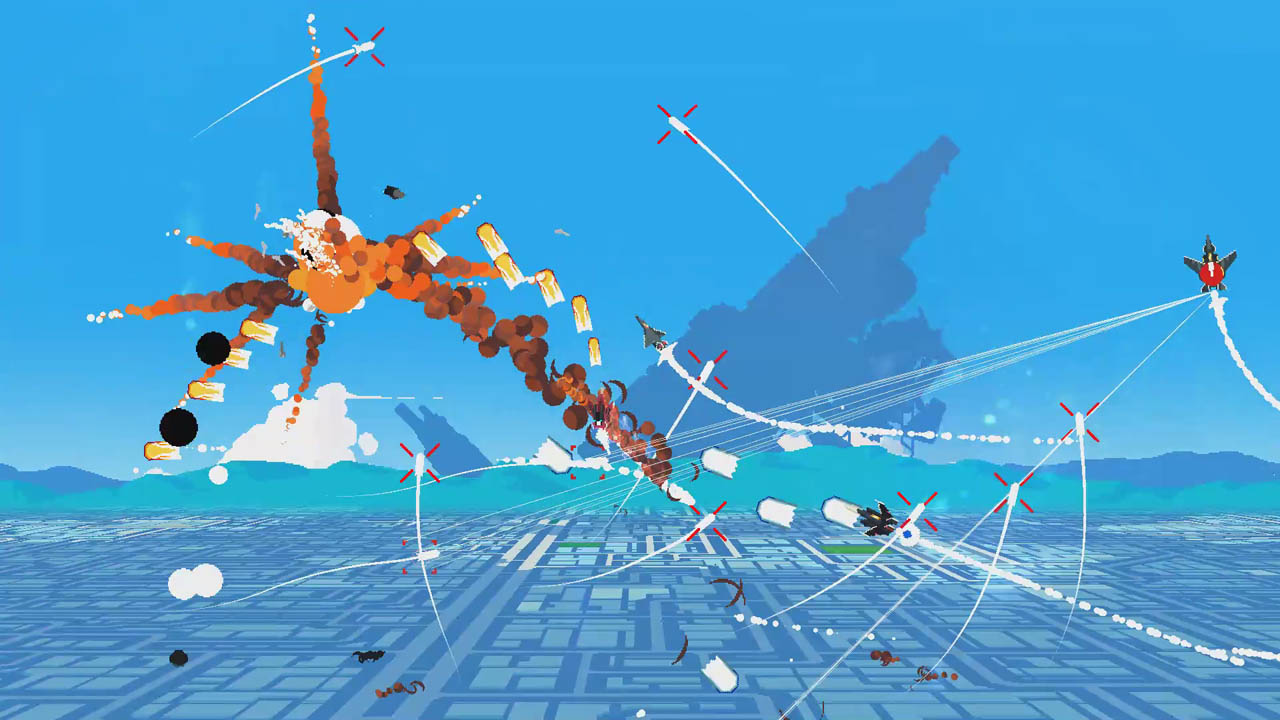 Depending on your mission type, the skies fill with waves of enemy fighters, ground and sea units, static targets and boss-types. As the screen fills, you fly, fire and fight through tight trajectories, blazing guns and single-fire or charge multi-tiered, homing missile barrages, as well as fire further weapon variants from bombs to lasers when unlocked. It all adds to produce an exhilarating experience, one that forces a smile on your face that is bigger than what any mach speed could ever produce. However, despite your manoeuvrability and firepower, the enemy forces have their own bullet-hells for you to dodge, producing one of the most satisfying elements of the gameplay: the dodge roll. As you fly through your sorties, enemy aircraft and ground forces position their guns on you, filling the skies with laser barrages, bullets and missiles. In order to survive such a barrage, a deft press of the B button forces your fighter into a tight barrel-roll that produces a slight window of invulnerability.

The level of satisfaction of pulling off such a move, as twenty missiles home in on you and several fighters bear a kamikaze course, is an exhilarating experience, as you swiftly twist, turn and dodge, before homing your own arsenal on your unsuspecting victims. It just feels great and thoroughly rewarding; especially when activated right at the last minute and missiles scream by you and jets fly around you within your dominance of the skies. However, that’s not to say that any of your missions are easy to complete. No mater how deftly you fly, or how quickly you’ll dodge, you’ll always find one sortie that sees you blown out of the sky. What makes the game so amazing though, is that it’s never the game’s fault or ever unfair in its execution; it’s simply always your fault and you soon jump back in, determined to correct the error of your ways, making victory an even sweeter taste when accomplished.

Between sorties, the game shifts to a 3D world map, where you guide your carrier, over land and sea, yes, land, in order to navigate your way to your next objective. It’s a novel idea and although it doesn’t really add anything to the overall game, presents a nice little distraction and offers something different from the norm. As you progress through the game, you open up more of what the game has to offer, from Lem, the talking feline engineer, through whom you can set up a variety of loadouts to equip your fighter with, to hoverjets that allow your carrier to traverse over land in order to reach other oceans and further missions. Each sortie also comes with a series of ratings, depending on performance, meaning you can change loadouts, revisit past missions and take it to the enemy with new armaments in order to achieve those elusive clear levels and Ace ratings. 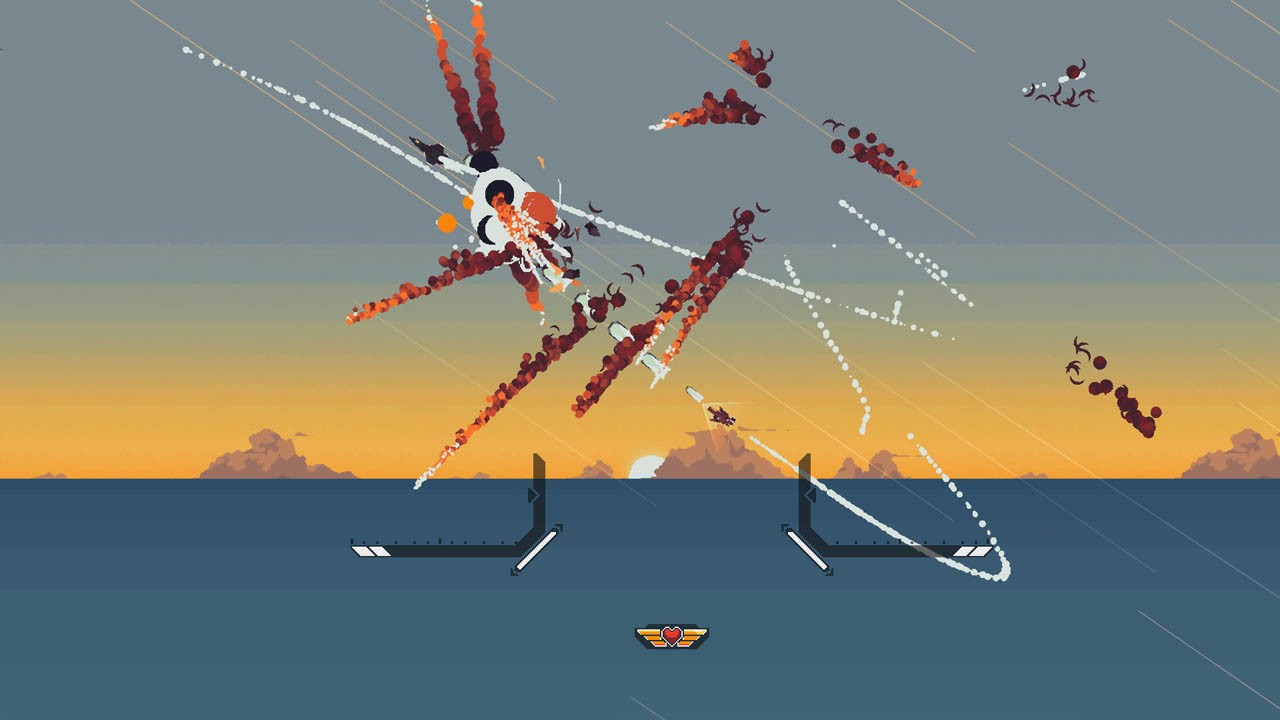 The game does a great job of easing you into all of its mechanics and components at a good pace. Early on, you’ll sample a good variety of mission structures and enemy types, helping you learn the basics of combat before ramping up the challenge to produce a real, arcade bullet-hell ride to exhilaration. The enemy AI soon become aggressive in their assaults and boss-types grow ever larger; making your dodge mechanic all the more urgent. It’s brutal, it’s absolutely manic, but hell, is it ever fun. Despite its challenge, there’s nothing here that is ever impossible; everything is down to you, and you alone and only your deft of hand and skill in flying will see you through.

Presentation-wise, the game holds a very retro feel in its graphical depictions and sounds; even holding a filter to replicate scan lines, or playing on a CRT monitor.. It holds a very arcade feel, a distinctly top-end arcade feel, that looks and sounds absolutely fantastic. The fast paced soundtrack matches the on-screen action, as explosions fly in all directions and countless missiles swarm your tail, producing an adrenaline-fuelled, quick-fire level of gameplay that leaves you out-of-breath, yet gasping for more. Each of the levels are sharp and short, with a three-life mechanic, yet generous checkpoint system that makes it a perfect casual, pick-and-play title that forces you to try one more time. Be warned though, if you play this on your lunch break, I’ll guarantee that you’ll be late back to work or your classroom.

Overall, Jet Lancer is one the most adrenaline-fuelled, guilty pleasures I have had played on the Nintendo Switch. It’s fast-paced, bullet-ridden levels hold massive amounts of variety and coupled with a tight, smooth and responsive control scheme, adds together to produce one of the most, if not, THE most satisfying shmup I have ever played. It looks beautiful, plays fantastically and sounds great; all of which is backed up by a wealth of content, huge level of depth and a long-term appeal that will keep you playing time after time. It’s time to buckle-in and hit the afterburners, as with Jet Lancer, you’re going to be in for one bullet-hell of a ride.

It’s time to buckle-in and hit the afterburners, as with Jet Lancer, you’re going to be in for one bullet-hell of a ride.