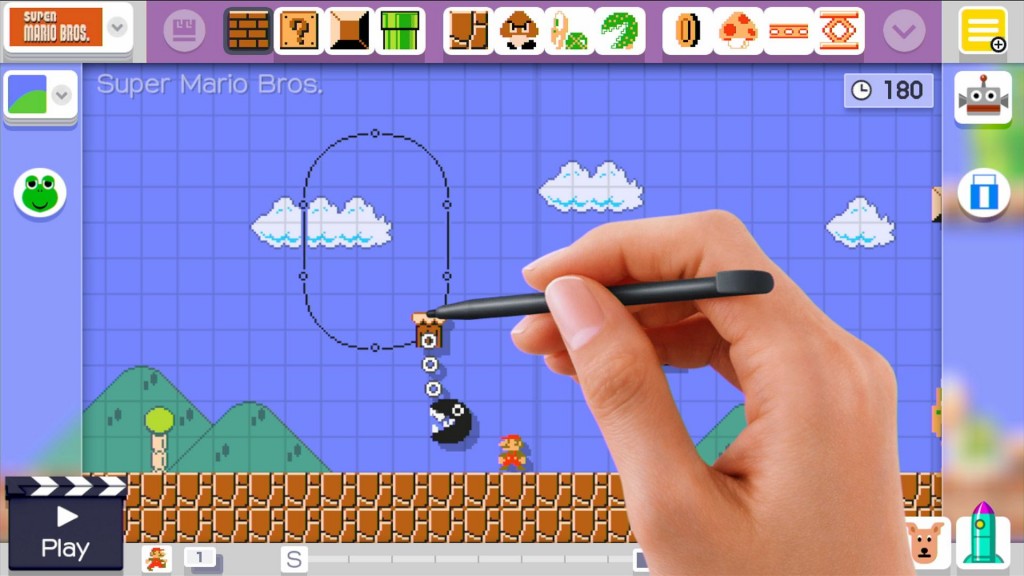 30 years ago Nintendo released what was arguably the most important, influential, and universally recognised video game in history. The original Super Mario Bros. has made an incredible impact on the video games industry. After three decades of updates, improvements, and refinements, Nintendo has made an incredibly bold move in releasing an application to allow the consumers themselves to make and distribute their very own Super Mario Bros. stages. That application is the WiiU’s brand new release, ‘Super Mario Maker’.

‘Super Mario Maker’ is split into two sections, ‘Crate’ and ‘Play’. The ‘Create’ section allows users to create their own Super Mario stages using a very comprehensive level editor. The ‘Play’ section allows you to play Super Mario in a variety of different game modes, incorporating your own stages, stages from users around the world via the online community, and a small handful of sample stages which are included on the game disc.

When you first load up ‘Super Mario Maker’ you are taken straight to an unfinished sample level. While playing this level a tutorial will interrupt and assist you to complete the build of the stage. You create stages using a very simple drag and drop method via the touch screen. The stage is split into a grid and you use the stylus to insert platforms, blocks, powers up, enemies, obstacles etc. It is incredibly user-friendly and you can test your stage from any point with a simply tap on the ‘play’ button.

When you start using the ‘Create’ mode you’ll be limited to a small selection of basic tools, two play styles, and two stage types. When you use the level editor for about 5 minutes, a notification will appear on-screen to inform you that more tools will be available soon. When you return to the level editor the following day more tools will be unlocked. This will re-occur about 8 times until you are able to use everything. Personally I was a bit put out by this as I wanted to create complicated stages from the get go. An option to unlock everything immediately would have been welcomed, but thankfully I was able to get around this. By rigging the clock on my Wii U system I was able to unlock everything within a couple of hours.

Once you have everything unlocked, you will be able to create stages with a very large array of elements. Additionally, you’ll be able to create them in the styles of popular 2D Mario games, complete with their unique gameplay mechanics, original music and sounds, and original graphic styles.

One element that I really enjoyed about this mix of styles is that Nintendo has retroactively created Ghost House and Airship stage types for the original Super Mario Bros, which were never seen in the original game. As a result there is new artwork and music included especially for this package. In fact, a lot of items that were previously not available in earlier games are now present in all four game styles, and these items can interact with each other in ways that have never been witnessed before in a Mario game. So much consideration has been placed in this mode allowing users almost infinite possibilities to create stages.

There is a limit to the length of each stage that you can create. You start with a blank ‘map’ or ‘game board’ which is your primary area. This prime area includes the stage’s beginning and end, the length of which can be shortened or extended up to a point. By dragging your Mario icon into a pipe you can create a warp to a secondary map or ‘sub area’ which can potentially double your stage’s length. You are limited to two maps per stage however you they can be different stage types, for example your primary area could be a Castle or Airship stage, whereas the sub area could be an Underground or Water stage.

In addition to all of the classic Mario elements, it is possible to annotate your stages with some brand new sound and visual effects. If you want to add some rave music and disco lighting to a room, or a sinister noise to a warp pipe, then you can take advantage of the sound effect tools. As well as a handful of preset sounds, you can record some of your own using the Wii U Gamepad’s microphone. These effects are entirely optional so Mario purists can choose not to use them if they so desire.

One thing that I thought was a little unusual is how this game manages power ups. Up until now, the way Mario normally upgrades is to turn into Super Mario first via a mushroom. Once he becomes Super Mario he is then able to find the more advanced power ups such as ‘fire flowers’, ‘power leafs’ and ‘feathers’. However, now you can place any power up that you like into a stage and that will be the power up that Mario discovers, regardless of whether he is Super Mario or not. This bugs the purist in me, but I guess it was a decision to help simplify the system for newcomers to level design.

In addition to a selection of well-known powers ups, there is a brand new type of Mushroom that can be used in the original Mario style of stage. This mushroom gives Mario his ‘Super Mario’ abilities, but as a bonus can transform his sprite into someone completely different. By unlocking new characters with Amiibo’s or by playing the ‘100 Mario Mode’, this mushroom can transform Mario into a huge number of classic video game icons including Yoshi, Link, Samus, Megaman, Sonic, even characters from Splatoon. When Mario transforms into one of these characters his sound effects will also change to accommodate the character he is playing as. It’s an amazing feature which is incredibly fun to play around with. 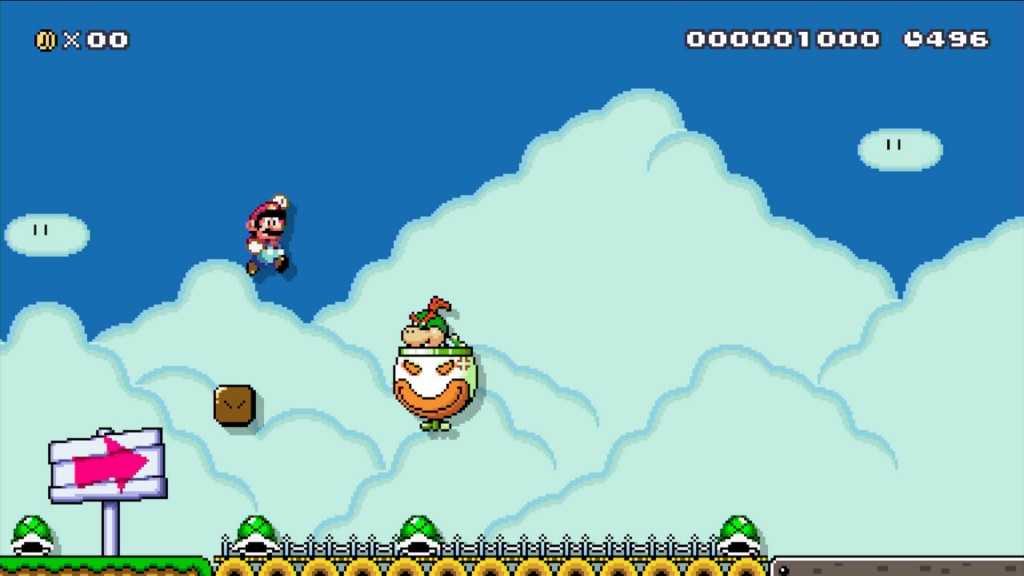 One thing that surprised me when using the editor was actually the background music. An element that I didn’t like was the use of rather obnoxious sound effects which occur as you build the stages. However, the game does included remixed versions of classic Mario music while you are in the ‘Create’ mode, which seamlessly transitions into the actual stage music when you play test your level. The reason I’ve brought this up was because while I was creating an underground stage from the first ‘Super Mario Bros.’ the underground theme included a beautiful piano arrangement which reminded me of ‘Castlevania: Symphony of the night’. I had to stop for a moment and take this music in because it was just so good.

Overall, the potential for what this level editor can create is huge. It’s an amazing tool for anyone who fancies trying their hand at level design, and I’ve had the opportunity to play some truly stunning stages from users around the world as a result of it. For anyone who is serious about making their own games, there is a number of free to use software programs available which are well-regarded within in indie game industry. However, something like Super Mario Maker is a perfect bridge for any video game fan who wants to take their first steps into the world of level making.

In ‘10 Mario Mode’ you play through a world of 8 stages which are included on the Mario Maker game disc. These stages are usually pretty short, but they do show off some of the crazy things that can be achieved through the level editor. You can only hold a maximum of 10 lives and are limited to picking up 3 ‘1ups’ per stage. As you beat each stage it will become unlocked as a ‘sample stage’, which you can later edit if you desire. You can play this mode multiple times until all of the sample stages are unlocked. Something I loved about this mode was the inclusion of ‘remixed’ versions of classic Mario stages, where you begin playing a familiar Mario level but with changes and surprises which pop up along the way. Once you have unlocked all of the sample stages you are treated to the four fantastic levels which were made especially for the Nintendo World Championship 2015 competition.

In ‘100 Mario Mode’ you are given 100 lives to beat a world consisting of random levels from the online community. All stages in this mode are possible to beat, however the quality of each stage will differ greatly depending on what you’re dealt. At first you have the choice of two difficulty settings (Easy and Normal), however by beating the ‘Normal Mode’ you can also unlock ‘Expert Mode’. By beating the ‘100 Mario Mode’ on any difficulty setting you unlock a video game character for use with the ‘mystery mushroom’ as mentioned above.

After beating a community made stage you will have the option of giving it a star if you like it, plus you can leave a comment. You also have the option of following your friends and users that make stages that you enjoy. By doing this you will be notified when they make something new. One element that I didn’t enjoy was how the community can actually leave comments within the stages themselves, which was something I found to be really annoying, particularly in popular stages. You can help minimise these annotations by selection ‘region only’ instead of ‘global’ in the settings menu, however I hope the option to turn these off completely will be included in a later patch. 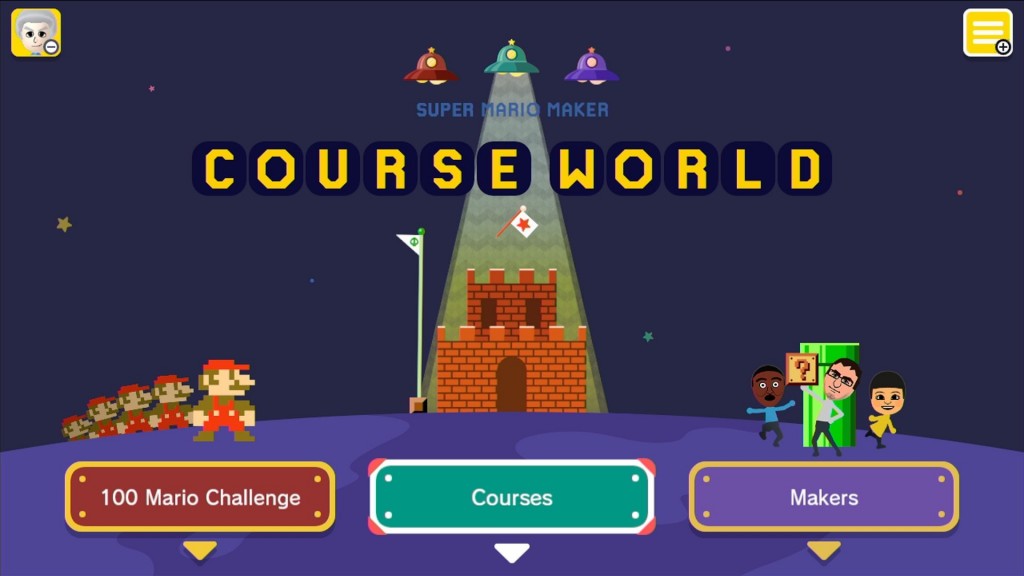 Playing stages in Mario Maker is a wonderful experience. Everything has been carefully recreated to feel like the original games, from the feel of the controls, the graphic styles, and the music / sounds. However, unlike many of the original games everything is now presented in the 16:9 aspect ratio with full HD graphics (with the exception of New Super Mario U which was also originally HD).

Overall, this is a truly ground breaking release and an essential buy for any platform game fan. Whether you are an aspiring game developer looking for some simple tools to practice with, or just someone who loves playing Super Mario, this is one of my favourite releases for the WiiU so far. Yes, there are a few downsides. There are some minor limitations, there’s no co-op multiplayer, and it is annoying that the tools unlock over time. However, the positives here completely out shadow any negatives. As long as the online servers are supported for this game then I believe it is worthy of top marks.