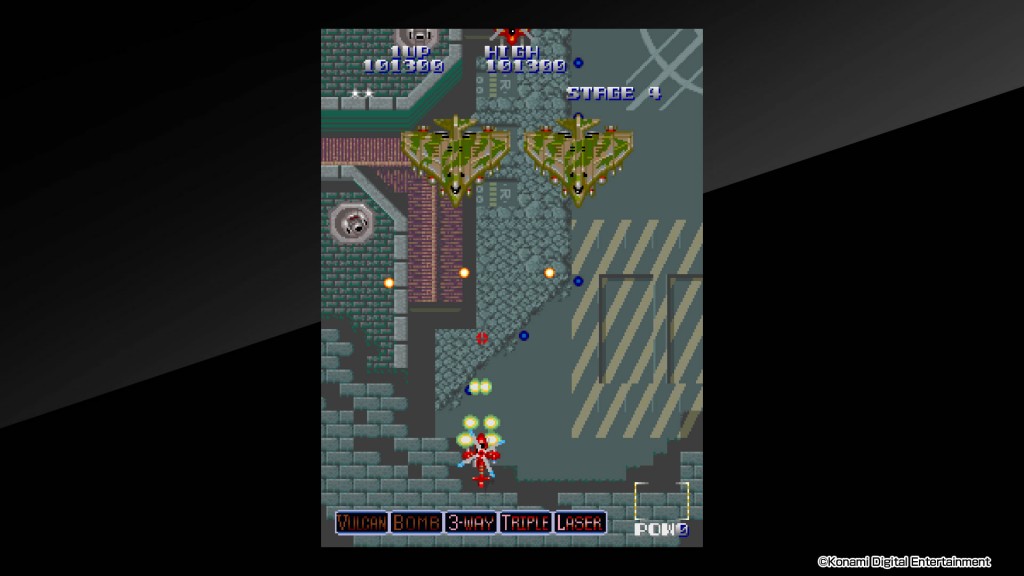 Arcade Archives AJax (or Typhoon as it is known in the west) was originally released in 1987 by Konami. It joins a quickly growing line up of games brought to the Playstation 4 by Hamster who are making it their own personal goal to cover your dashboard in nostalgia flavoured goodness. Hamster have been kind enough to include the Japanese and Western versions so you essentially get two games for the price of one, as the stages you play in are different depending on which version you are playing.

Typhoon takes place in a fictional 2007 timeline, which made me chuckle in the first place.  Earth has been invaded and conquered by aliens. It is you job to take out this scourge of occupation using vehicles under operation code-named ‘A Jax’ that were designed to liberate the Earth from the extra terrestrial scourge.

Game play is divided into two scrolling sections with two different vehicles: the first being a vertical scrolling up the screen section with the attack helicopter. The second is an Afterburner type scrolling into the screen stage with the jet fighter. It is almost like playing two different games mashed into together as you switch between levels. Controls are easy to grasp as you only have a shooting and bombing button to worry about as well as your directional controls.

During the helicopter segments, the player has access to four different types of weapons including such delights as the Vulcan, Bomb, the 3-Way shot, Triple fire and Laser gun which can all be accessed by picking up the appropriate icon.  The player also has access to option satellites which add additional firepower. The jet sections play without an additional power up except for the standard bullet and bomb and so lack a bit of variety. 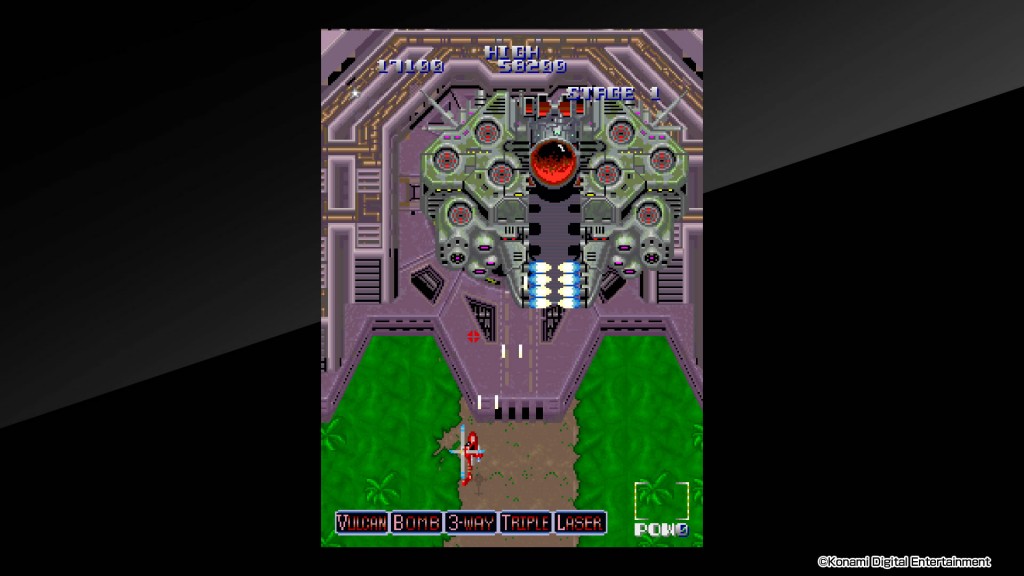 I don’t know what I expected from a game that is part of a genre that has changed so much since Typhoon’s original release in 1987. In that time we’ve had the likes of Ikaruga, Super Aleste and Star Soldier, where the controls are so tight, the gameplay has been honed to a smooth perfection, yet Typhoon is sitting in it’s same comfy chair almost thirty years old and telling me that it’s still fun to play and I’m looking at my watch hoping that visiting time is up soon.

Unlike Renegade that I played from the Arcade Archive collection previously, unfortunately for me, I had never heard of it until I had booted it up, so the normal wave of nostalgia and rose-tinted spectacles were simply not there. So instead, I’m judging a game that passed by my 13-year-old self and into the past and instead judging it on it’s merits alone and to be perfectly honest, it is really hard to recommend that you consider it for your collection.

While the controls are tight and responsive, the bullet collision detection is very ropey, especially on the into the screen sections, where you are lucky to get two or three frames of animation on a bullet as it flies towards you. It becomes frustrating even with unlimited credits, as you’re never really learning attack patterns, or how best to move to avoid bullets, and it gets worse on the vertical scrolling sections as you spend a part of your time wondering what actually hit you, especially since your hit box seems to be slightly bigger than the ship itself. 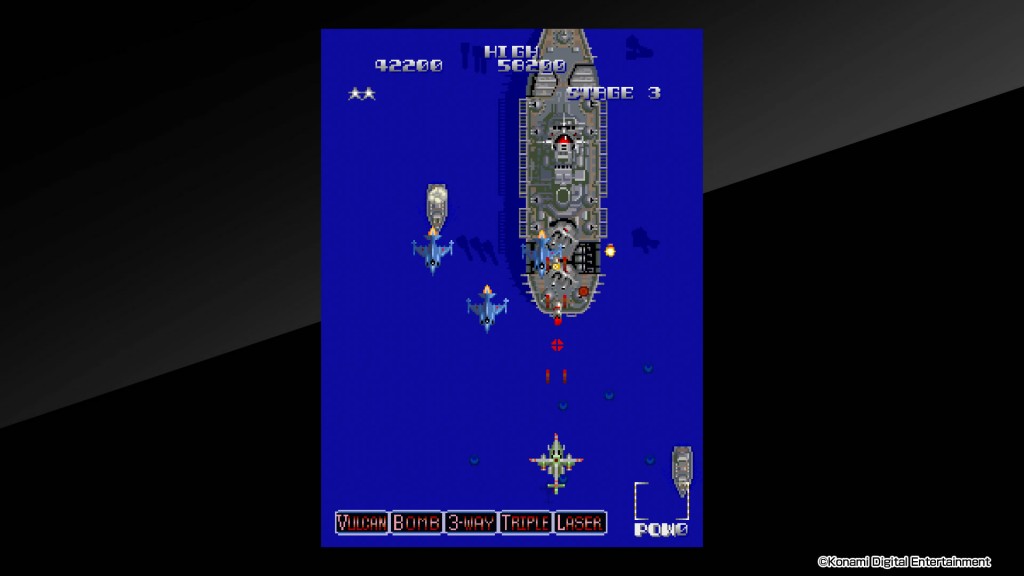 You also need to be constantly bombing as well as shooting in order to hit any of the ground targets and while there is an option to turn on rapid fire, it doesn’t do it for the bombs, that don’t seem to have a larger range of damage than the size of the bombs themselves. Too many times, I feel I’m trying to hit the exhaust port on the Death Star in Star Wars, without a guidance computer, the Force or Han Solo in back up and it was so frustrating that a couple of times, I switched the game off because I was starting to really dislike it.

The worst thing about this is that Hamster have done their usual excellent job on presentation, with a raft of options, trophies to unlock and have obvious spent time on making the game as playable as they can. Unfortunately Typhoon/Ajax should really have stayed back in 1987. You really feel that Hamster’s skills in rolling out these arcade classics would have been put to better use on another conversion.

Like any of the Arcade Archives collection of games, Ajax relies on nostalgia to allow you to forgive the shortfalls it presents due to it’s age. Without the rose-tinted glasses in place, I can’t see many people getting much enjoyment from this considering how frustrating the game play is.