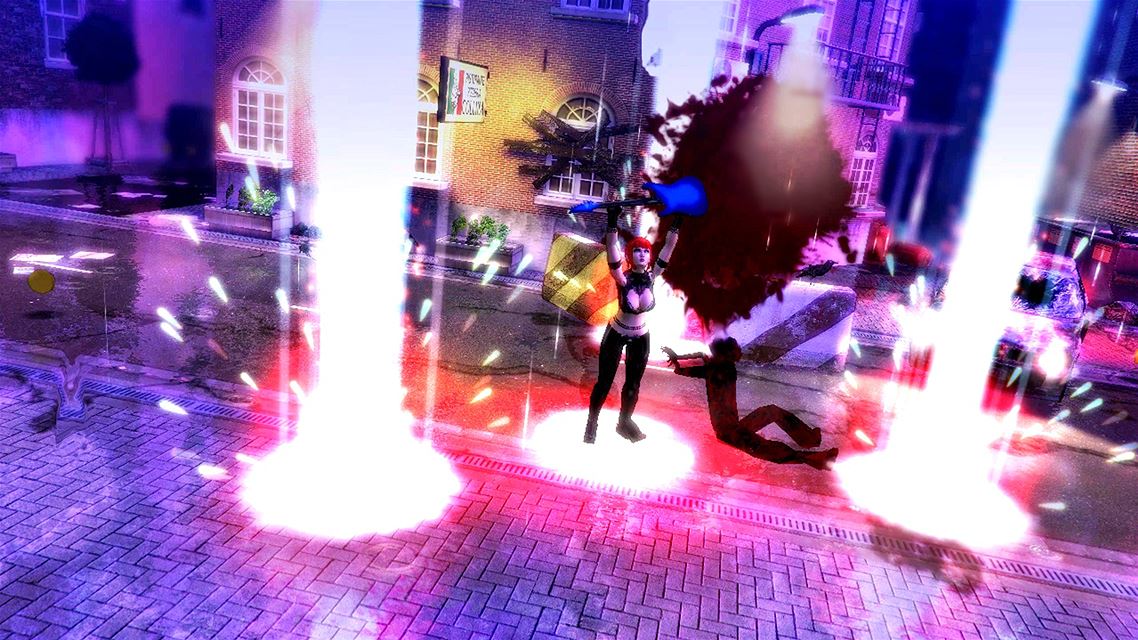 Throw your devil horns and start head-banging until your nose bleeds for Rock Zombie, a hack & slash brawler that resurrects the spirits of bygone side-scrolling beat ‘em ups such as Golden Axe or Streets of Rage. When a mysterious green gas turns the world’s population into flesh-eating zombies, three magical musicians take it upon themselves to use their instruments and the power of the dark arts to thwart the undead menace and find the source of this Hell-on-earth.

Inspired by bargain bucket B-Movies and classics from the back corners of the arcade, Rock Zombie is a trashy throwback both visually and in terms of gameplay. Upon selecting one of the three playable characters available, you’ll be thrust head first into a non-stop horde of zombies, tricky boss battles and even the occasional driving level for good measure. With the story unfolding over a series of comic strip cut-scenes, you’ll have to make your way through twenty levels of splatter gore and demonic resurrection in order to complete the game.

Despite a valiant attempt at some punk rock aesthetics, the game looks visually dated. Character models are stiff and lifeless, while the cut-scenes are full of spelling and grammatical errors. A meaty twenty plus level campaign is spoiled by desperately repetitive visuals, relying far too much on clichéd genre tropes of the zombie movie genre. It can take up three or four levels just to get through areas such as the abandoned school or the damage-riddled streets, and with little on offer aside from a few varied environmental traps or the occasional off-shooting path, you’ll constantly feel like you’re retreading old ground. 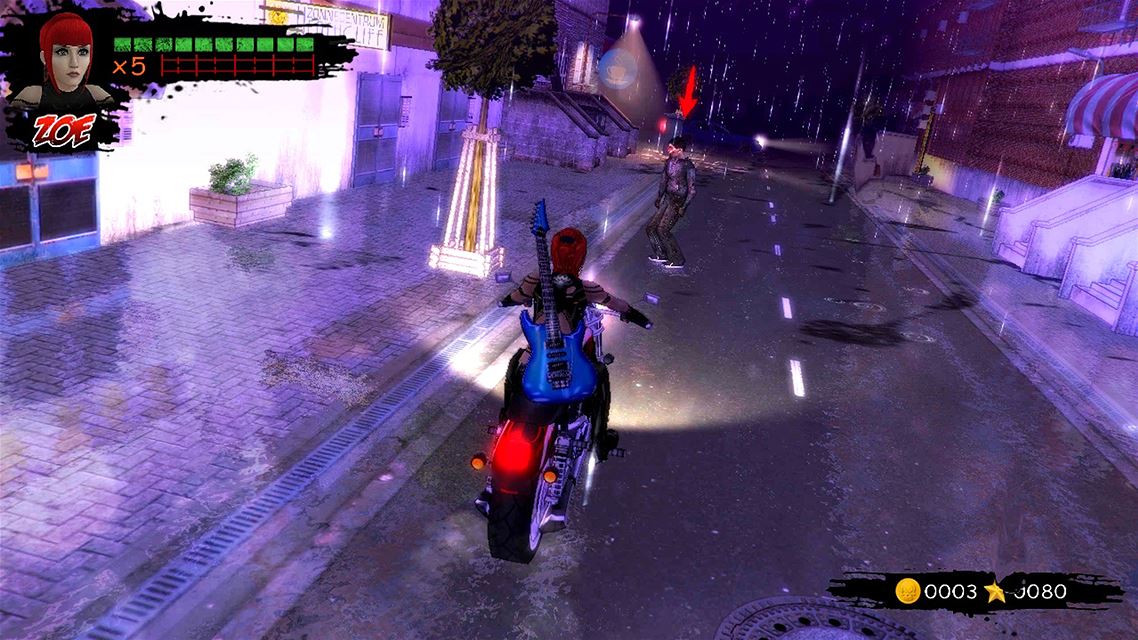 Coincidentally, the gameplay is flawed in a similar fashion. While the old-school feel of the game makes for a welcome cover version of traditionally 2D brawlers, there’s little variation in the enemies that stand in your way. Some zombies will shuffle towards you at a snail’s pace, while others will explode upon death. However, once you’ve mastered the game’s defensive roll with the right analogue stick, you’ll face little threat as you slice and dice your way through the game.

Armed with a surprisingly durable guitar, a combination of light and heavy attacks can be utilized to dispatch your foes. It’s pretty easy to pick up and play on Xbox One but personally, I didn’t see much differentiation in the damage dealt by either of these attacks. The only mindful approach is to use the sideways and downward nature of the animation when facing off against a combination of zombies that crawl and those that stand on their own two feet. The sporadic nature of where the enemies spawn also makes the game’s combo hit meter feel redundant, never managing to make it into double digits unless using one of the spells on offer.

Your magic meter can be refilled by defeating enemies or collecting some of the in-game power-ups scattered around each level. A quick touch of the X button will make quick work out of one solitary enemy, while the Y button will unleash a beam of light that turns anything in its way into a pool of blood and guts on the ground. Without a doubt, the most effective spell is Thunder Rain, a bombardment of magic that kills a whole pack of zombies in an instant, perfect for those moments when you’re completely overwhelmed.  By combining these physical and magical attacks, you can unleash special moves appropriately labelled Death Metal, Heavy Metal, Black Metal and Rock & Roll. However, aside from the pop-up label on-screen, you wouldn’t know it due to similar animations being used for both special and regular attacks. 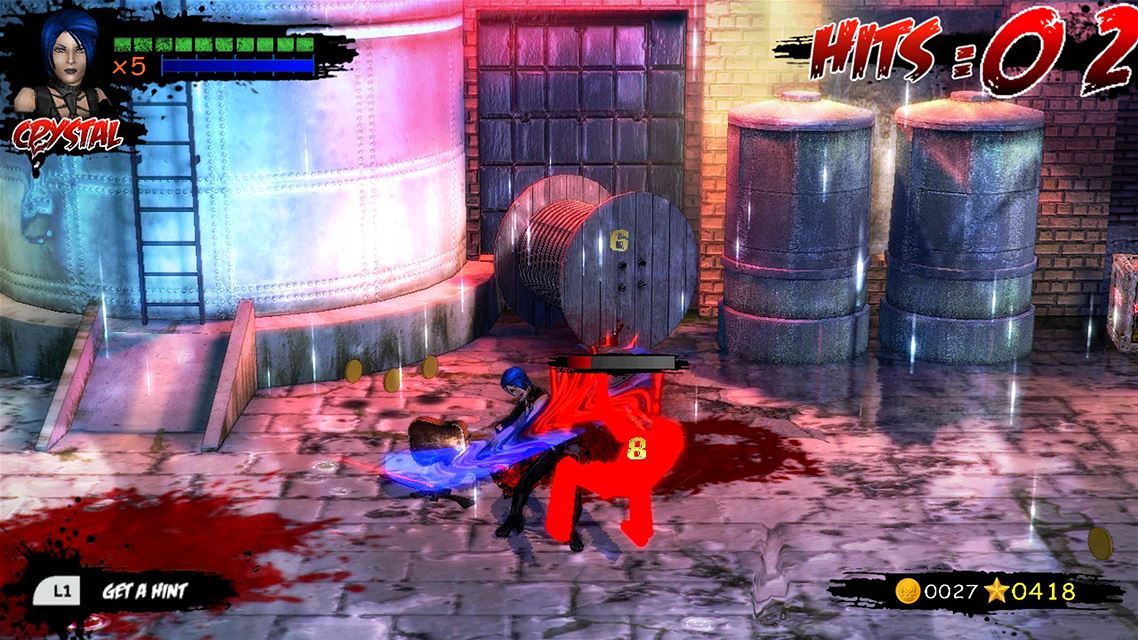 Taking a break from regular set-list of zombie killing action is the occasional boss fight. As you’d expect, these are much tougher than your average enemy and often come equipped with a variety of life-spilling special moves that can reduce your health meter to nothing in an instant. Given the relatively easy nature of regular gameplay, these can be surprisingly tricky. A blessing but also a curse, they spice things up a bit while dramatically increasing the difficulty curve at the same time. Another level variation comes in the form of the motorcycle missions that occur a few times throughout as well. During these levels, you’ll earn points for knocking over zombies while traps such as hot lava, poisonous green goo, damaged vehicles and even brick walls get in the way. You’ll only need to worry about leaning left or right, but given the springy nature of the bike’s control mechanics, this is trickier than it sounds.

As an added challenge, each level is littered with gold coins. These can be earned by killing zombies, destroying Rock Zombie stamped crates or searching behind some of the hidden areas in the environment. You’ll also be given a bonus for earning a high score in each level, after which, these coins can be traded for extra costumes and collectables. It’s a nice touch that adds extra replay value, but it also highlights one glaringly obvious omission from a game of this type. There’s no two-player mode. Having a friend to assist in your mission would certainly give this mediocre game an additional layer of brainless fun. Given the legacy of the games that inspired Rock Zombie, some couch co-op is sorely missed.

Rock Zombie ironically tries to revitalize a tired gaming genre from the past by throwing hordes of undead into the mix. An interesting premise and a bold palette isn’t enough to stop this gnarly brawler from being booed off stage due to lifeless animations, repetitive gameplay and overall inconsistency of the game.