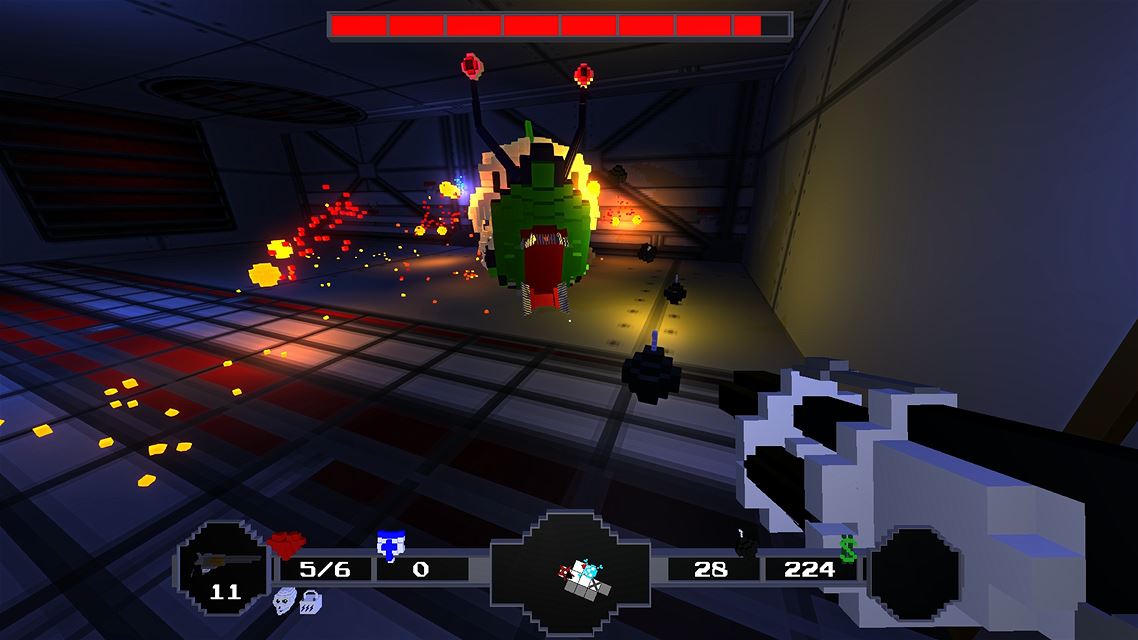 If you’re going to make death threats to Gabe Newell over your game being in Steam’s Early Access program, at least make sure said game is decent. I’m sure most of us are aware of Paranautical Activity’s subsequent death as a result of said threats, but it’s managed to rise from the ashes of it’s brutally burnt corpse and make it’s way onto Xbox One. As if the controversy surrounding Paranautical Activity wasn’t enough, the original developers sold their rights for the game to Digerati. Since then it has been rereleased unto the world and we’re about to find out whether it was worth all that aggro.

For anyone who has no idea what Paranautical Activity is, it’s a procedurally generated first-person rogue-like dungeon crawler. We’ve seen a stack of these on the market for the last few years, including The Binding of Isaac and Ziggurat; both of which push the boundaries of the genre, yet paying homage to hardcore FPS classics like Doom & Quake. In Paranautical Activity the player has to struggle through 8 floors of randomly generated rooms filled with 40+ monsters, in order to beat the game. It sounds great but I have to be honest, there are quite a few limitations that kept me coming back for more.

Before we get onto the drawbacks to Paranautical Activity, the controls need to be mentioned. Having only played on Xbox One I have to commend the controller layout. The player shoots with RT and jumps with LT, whilst using their thumbs to control the movement and aiming of your character. It’s a balanced layout that is conducive to fast and frantic gameplay, which of course is how Paranautical Activity is billed. 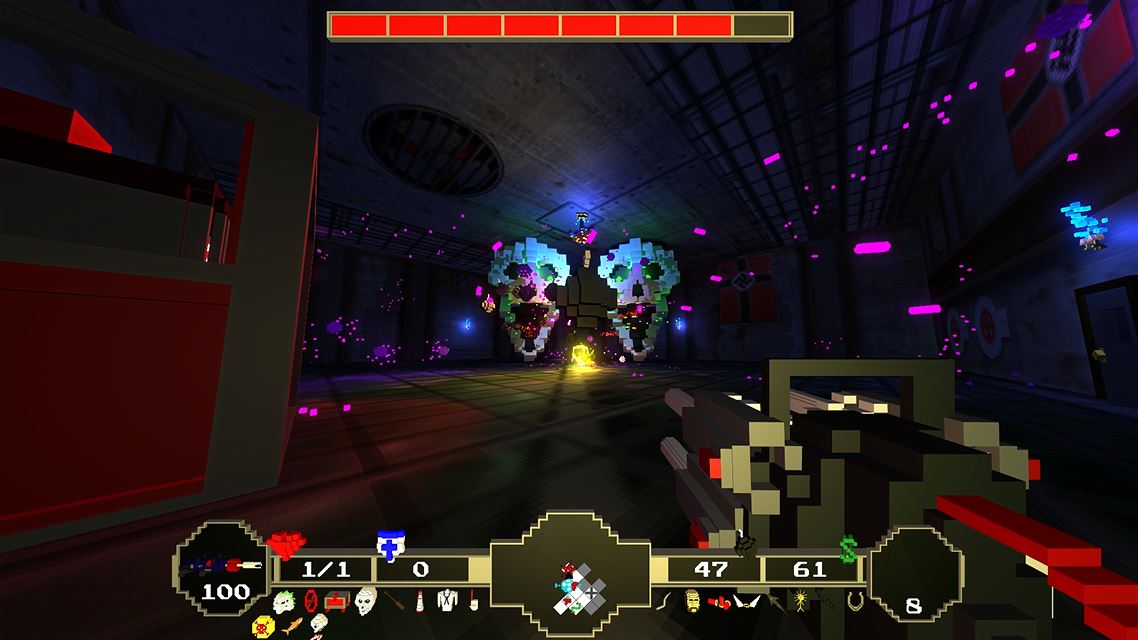 Paranautical Activity features a great soundtrack. It’s obnoxiously loudmouthed dubstep is an adrenaline pumper, often pushing me to fight harder; sometimes with a little more recklessness. That said it’s great to hear music used appropriately in an indie title such as this, where too often low-budget games lack a proper soundtrack.

One of the main cons for me is the graphics in Paranautical Activity. I understand they’re going for some kind of nautical theme (although the backstory isn’t explained at all), but everything is either really dark and bland, or too bright and garish. Compare this to the vibrant colours in Ziggurat or the top-down cartoons in The Binding of Isaac and you’ll begin to wonder what they were going for in Paranautical Activity. It’s a clash of styles involving voxel-based enemies and rooms which look so similar they all merge into one. Ultimately this has an effect on the replayability of the game, as the player isn’t getting any kind of visual cue that they’ve moved on to the next level. Not only that but it never really feels like you’re getting anywhere, as each floor becomes a stale old hat.

Despite there being over 40 enemies and hundreds of procedurally generated rooms, Paranautical Activity feels empty. I was never really scared by any of the monsters, as they’re all pretty much the same to battle – strafe around and shoot a couple of times. When you’ve got low health and are running out of ammo you’d think seeing a giant demon would be a little stressful, but so long as you dodge and shoot you’ll be fine. It makes the gameplay feel quite dull and most of my deaths during play-through were down to my own stupidity – getting too close to an enemy or missing easy shots. It should definitely be noted that if you shoot an enemy in the head it does no more damage than if you caught their left big toe; the game doesn’t reward the player for skill shots. 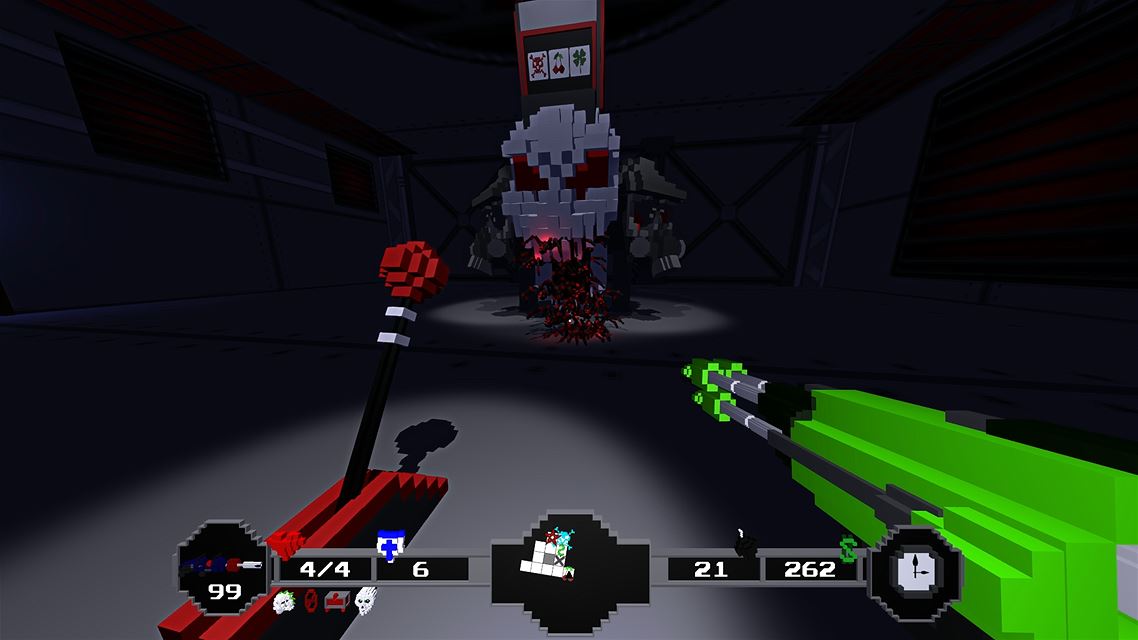 rating 5Paranautical Activity does boast a pretty cool power-up system, whereby said power-ups stack as the player collects them. Turning gravity on it’s head or linking your health to the number of bombs carried provides the player with a little bit of depth to the otherwise shallow gameplay. Similarly there are treasure rooms in which the player can trade their haul of coins for more powerful weapons – although some of them are absolute shockers so beware!

Being totally honest with great games like Ziggurat and The Binding of Isaac out there, I can’t see why I’d come back to Paranautical Activity. It’s lacklustre gameplay feels repetitive and provides little scope for strategy when you’re in a jam. The boring visuals of Paranautical Activity almost cry out that they’re unsure of themselves, leaving players with the idea that the developers just said “that’ll do”. For a fun-packed genre that is making a tremendous comeback, Paranautical Activity is unfortunately very forgettable. Despite it’s promise of fast and furious gameplay on top of hours of replayability, Paranautical Activity fails to deliver what it set out to achieve – a missed opportunity indeed.