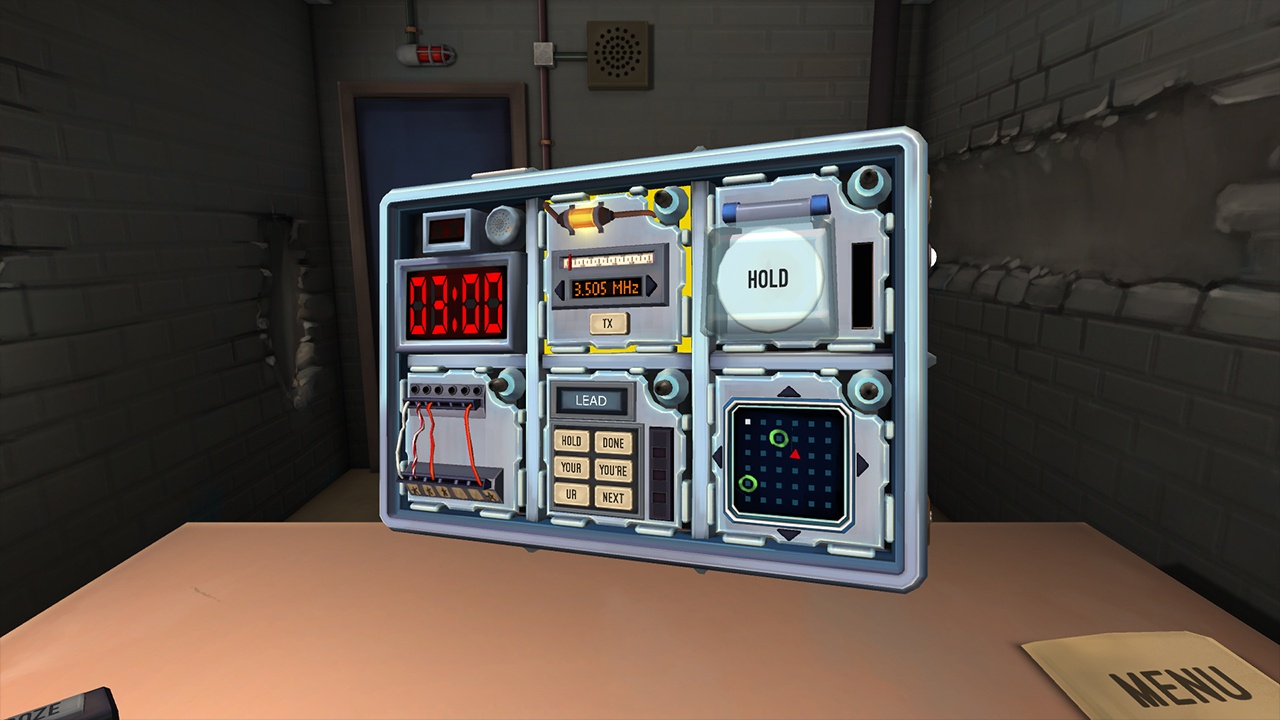 The late comedian Mitch Hedberg has a famous joke in which he reminds the audience that, despite Sprite advertising as being just lemon and lime, “there’s more to it than that.” Indeed, some of the best products in the world are touted and sold under a very simple guise, but the reality is there’s a greater value than what meets the eye. Maybe it’s the design or the brand; there’s a real good reason that you can get jeans for either twenty dollars or eighty dollars, and plenty of people get that second pair. Maybe it’s the undercurrent or convenience: there’s a never-ending plethora of burger joints in the United States, and yet McDonalds still has a massive stranglehold on the market. Maybe it’s just a little something extra that you can’t quite put into words. When I go to grab an energy drink, it’s a buyers market, yet I always flock to the same can every time. Despite years and plenty of flavors, the original Monster is always the choice for me, and I think it’s because of the consistent delivery (or my crippling addiction). In either case, how the product is sold, not necessarily what the product is, keeps me loyal, and I think that’s the key to success in Keep Talking and Nobody Explodes.

The concept of Keep Talking and Nobody Explodes will feel oddly familiar if you’ve kept up with any of the Switch reviews that this site does. Basically, you are one of two people in a bomb defusing team: either you’re the person defusing the bomb or you’re the person reading the manual. Adhering to the honor system, this game should be played with only two people, and each should keep their eyes on their own territory. Theoretically, you can change the game and play with any number of folk reading the manual, or everyone looking at everything at the same time, but it does change the dynamic quite a bit. Imposing a bit of a restriction on the play style allows for the tension of the game to build in a more dramatic and fun fashion: you have a limited amount of time to defuse the bomb, and you can only make so many mistakes. Each bomb has a series of puzzles built into it, either in the form of traditional “bomb” setups (wires to cut, switches to toggle) to situations dramatically more complex and almost absurd (coded messages, memory games, even morse code). Bombs will start off simple and become quite complicated, and some levels will even ask you to defuse multiple bombs with different senses of urgency. But it’s all going to be okay. As long as communication is good, you’ll pull through. At least, one of you will. 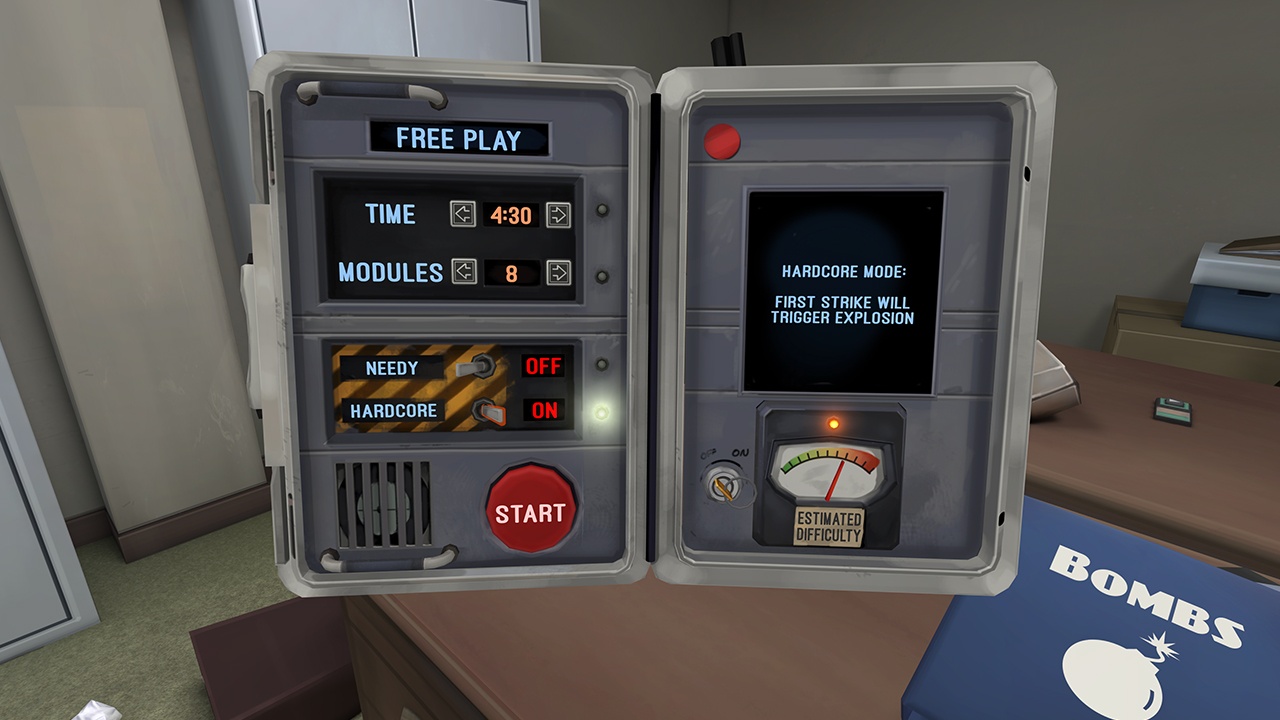 Before anyone starts asking questions, pointing fingers or calling foul, let’s just take a moment and really clear the field. This game and another game (Them Bombs) are different games by different companies. Them Bombs came to us from the mobile game market, Keep Talking and Nobody Explodes was on Steam and VR. Them Bombs is simpler in display, focusing on just the bomb’s face and the puzzles directly in front of you. Keep Talking, with the ability to manipulate the bomb in a 3D-esque environment, is more complex and has quite a few other factors to consider in any and all bomb diffusion. Them Bombs feels much more like a “one and done” situation, where you can just fire off a single mission, call it a day, and then go do something else (much like most mobile games). Keep Talking is a more invested situation, where you and your partner(s) are in this thing in an almost career setting, building up to a significantly harder set of bombs with each level that you cross. Each level has several bomb stages to it, culminating in level seven, which the game calls “exotic bombs” and I call “goddamn madness.” In short, when you see that five dollar price difference between the games, really consider what you’re most interested in before you drop the cash to pick up one or the other.

Personally, I love what Keep Talking and Nobody Explodes brings to the table. The UI is simple, clear and smooth as silk. The tutorial on how to use the JoyCons and operate takes a grand total of two minutes, but should be required for everyone in order to play because there’s nothing worse than losing a mission simply because you have no idea which way is up. Additionally, reading and memorizing the manual is a lost cause: at twenty-three pages of heavily detailed, fascinatingly constructed puzzles, you’d need a photogenic memory to effectively eliminate the manual. However, a quick flip through between bombs will help the manual holder to remember which pages certain traps are on, which could expedite and streamline your efforts. Once you’re in a mission, it’s so important to keep calm and maintain constant, clear communication to make sure that everyone knows the difference between two yellow wires and a yellow wire plus another red wire. 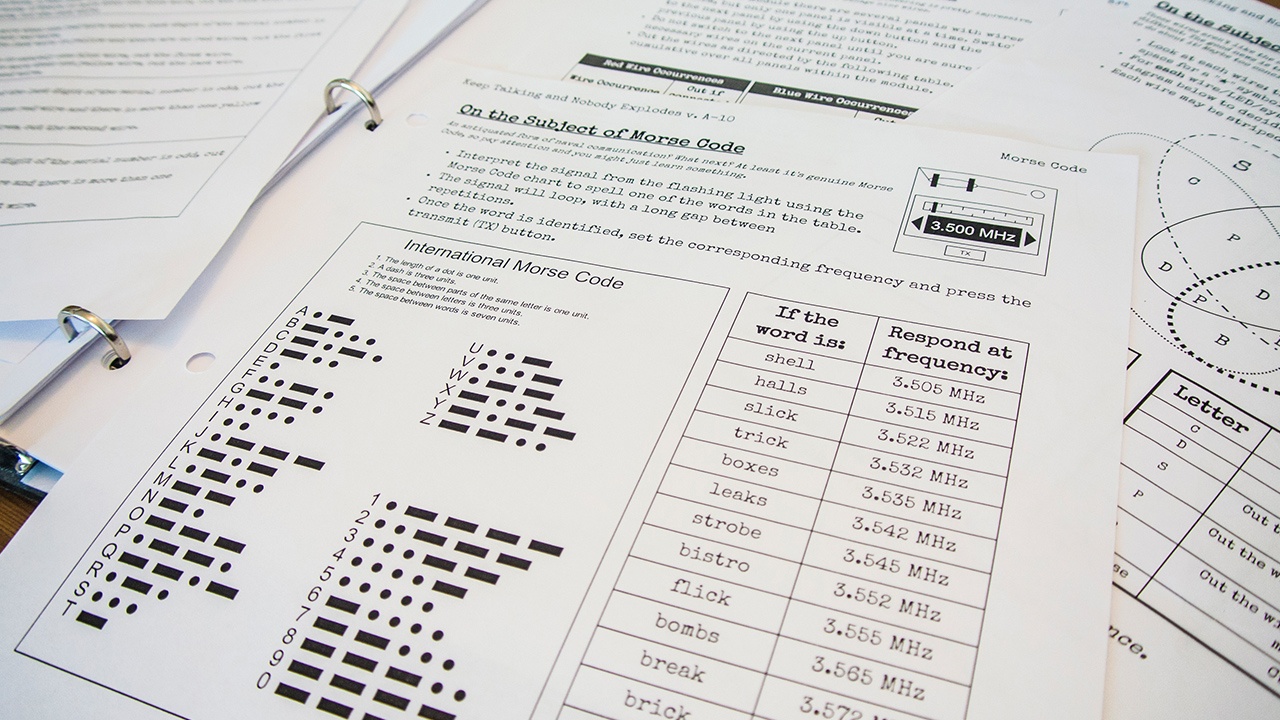 I will say that these traps become almost insanely difficult to dictate and communicate through words. The title of the game says it all: Keep Talking and Nobody Explodes. Sure, cutting the wire and relaying sequences for memory match up is hard, but it only gets harder. Have you ever tried to talk someone through an invisible maze, without looking at the maze whatsoever, while an urgent timer reminds you there’s less than two minutes before we all die? This game is like the opposite of Mario Party. While Mario Party will cause friends, family and loved ones to lose their minds with disbelief and anger, Keep Talking brings people closer than you could imagine. My wife and I spent a good hour playing this together, and it feels like it actually helped bridge and improve our communication as a couple as we figured out, together, what the damn password was based on almost no information whatsoever. Seriously, this should be an event at a trust building getaway for newlyweds and companies without synergy. It’s that compelling.

On the technical side, Keep Talking and Nobody Explodes is pretty no-frills with music or anything like that. There’s ambience in the form of some simple strings that get more anxious as time beeps down, the screaming blip of the timer itself, and the occasional sound of doors opening and closing as people flee the building, not trusting your expertise. The game loads up almost instantly, with no stutters, glitches or crashes in all the rounds that I played. A relatively small footprint means that almost every Switch out there has room for this game, and, since everything is local co-op, the need for internet is nonexistent. This game is actually a perfect “blackout” title, either literal (the power’s been knocked out) or figurative (mom disconnected the router because no one talks anymore). If you can read, you can play this game. If you can understand directions, you can win this game. If you don’t have a single friend to play with, then, sadly, there’s no purpose in you getting this, but I guarantee you can find someone willing to try. After all, nothing builds new friendships like working together to prevent your own deaths.

A relatively small footprint means that almost every Switch out there has room for this game, and, since everything is local co-op, the need for internet is nonexistent.