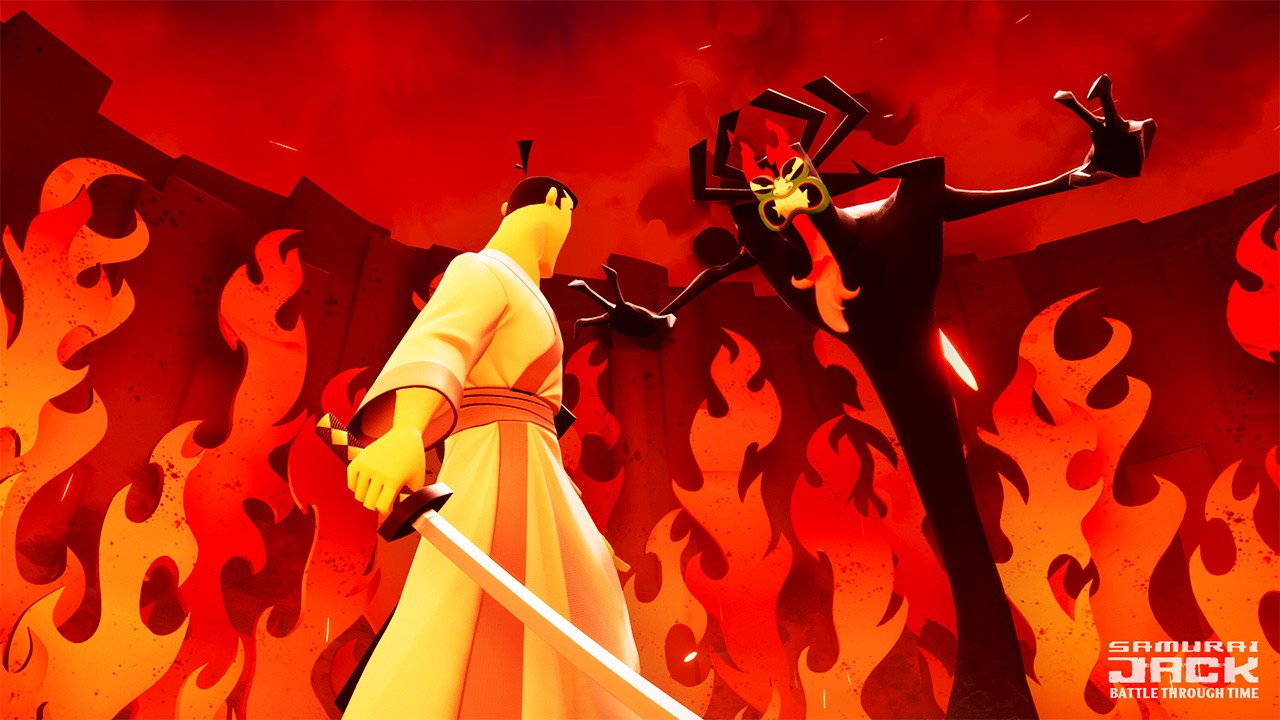 Genndy Tartakovsky is a freaking treasure, and any modern fan of animation will know his name and his work. Dexter’s Laboratory, the original Clone Wars, even the Hotel Transylvania movies bears his mark, with many other projects having smaller but still influential moments shared by him. Yet his greatest project to date is, far and away, Samurai Jack. The tale of a Samurai forced to jump between different eras and dimensions in his quest to slay the dark wizard Aku and free the world from his tyranny. After a long hiatus, fans could finally see the final leg of Jack’s quest back in 2017, nearly 12 years after the show had initially stopped, showing that the staying power of Tartakovsky’s particular brand of animation and storytelling is impressive. Fans, though, were still hungry, and that hunger culminated into the creation of a game, a game that would give players control of Jack and his future, and also offer up…a different ending.

If you’ve never watched the animation before (especially not the final season), the setup for Samurai Jack: Battle Through Time can be a bit difficult to understand. Aku is the evil overlord who has created a hellish existence, and Jack, the lone samurai who possesses the magical blade that can defeat Aku, has finally tracked him down. In order to survive and prolong his existence, Aku creates a time portal and hurls Jack inside, causing Jack to teleport to the far future Where Aku’s evil rule is absolute. Jack, thankfully, is not one to just sit around and wait for death. Besides needing to defeat Aku, he also hopes to free Ashi, the daughter of Aku who, in the animation, has a freaking crazy role throughout the series (and a pivotal role in the ending). Jack explores and quickly finds that several of the friends and companions he has met throughout the years are still alive and scattered across these realities, and some are even being controlled by Aku, forcing Jack to fight his former allies. Defeating them means freeing Aku’s grip on this world, creating a new time portal and, hopefully, bringing Jack one step closer to ending the reign of this mad wizard. 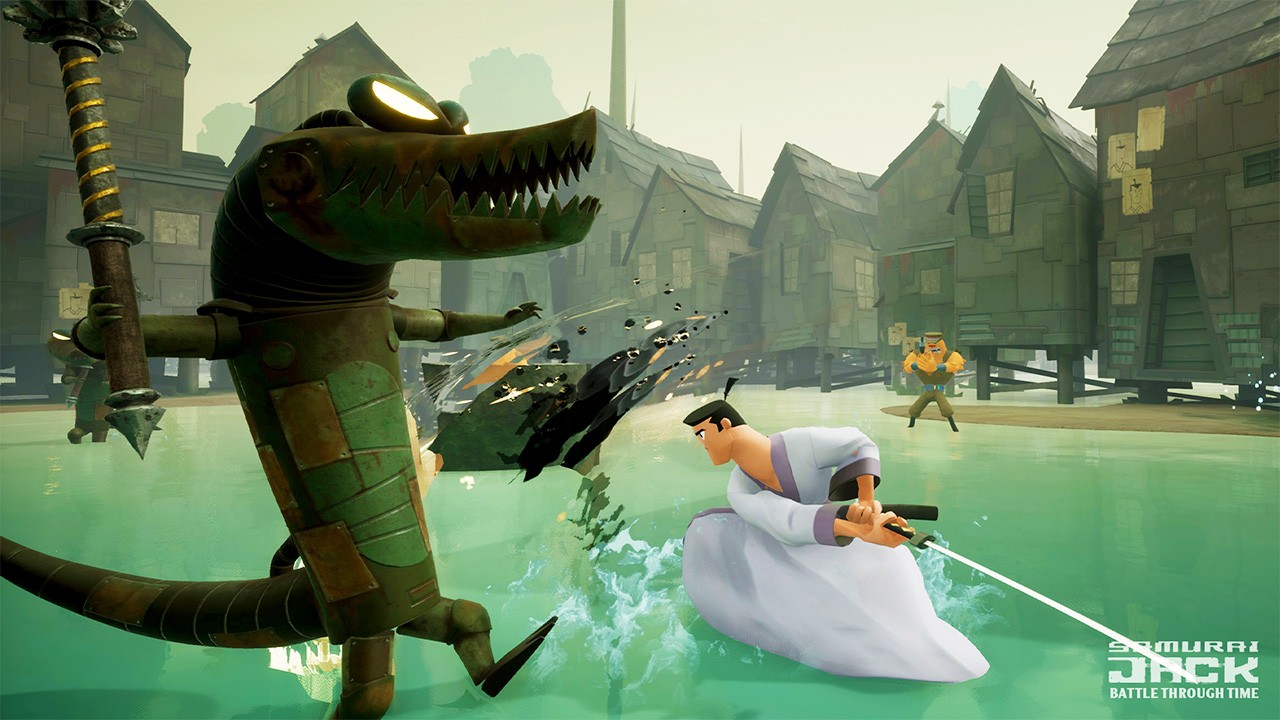 Samurai Jack: Battle Through Time plays out as a 3rd person, 3D action game that has a few elements of the skill tree, weapon progression and exploration under its belt. As Jack enters into a new area, he has to find his way through different, familiar (to fans) locations, battling generic monsters and encountering NPCs that are both friend and foe. Along the way, Jack can smash different containers (barrels, boxes, etc.) to pick up a bevy of different items that are collectible for different reasons. Gold exists to buy upgrades from Da Samurai (who appears in different locations to sell healing items, repair weapons and up your skill proficiency with different, lethal items). Skill Fire and Bushido, two different types of glowy things, help to add traits through the skill tree. Different colours of Dama act as temporary boosts to some part of Jack’s being, such as stronger defence, higher attacks or even healing damage. Lastly, Kiai Fire is the essence needed to charge up Jack’s Kiai Attack, which varies from weapon to weapon and can do devastating, sometimes room-clearing damage.

For most of the game, Samurai Jack: Battle Through Time is a quest of combat, and the combat balance throughout is fairly well done. Jack has a primary light and heavy attack, which can be combined through intuitive button work and gradually unlocking more combinations in the Skill Tree. The Kiai Fire is triggered from both joystick buttons being pushed down, and the general rule there is “face the direction you wish to destroy.” Jack can move in and out of engagement with the enemy by dashing, sliding, parrying and using a lot of well-timed swings in order to either confirm or deny the actions of the enemy. In fact, getting good at doing the parry (which asks you to hit the L shoulder button at the right time) is an incredibly lucrative act, as you get pickups of the grandest order just from this action. One of the first bosses, the Scotsman (who is another mainstay of the series), will give something insane like 400 gold or 200 Skill Fire from successful parries, and has the added bonus of not getting smacked in the face, though there’s nothing wrong with taking a bit of damage. Besides a life meter, Jack also has progressively more battle damaged clothing from the hits he gets in fights, which equate to a cooler looking protagonist and also entrenches you more in the lore of being Jack.

From a purely objective standpoint, Samurai Jack: Battle Through Time is a decent title for someone who isn’t interested or knowledgeable about the series. The fighting is good, and gets progressively more exciting the faster and more frequently you upgrade the skill tree. Additional weapons add to variety in play style, allowing you to focus on speed, range and outright brute strength if that’s your preferred approach, with several combinations and weapon perks to unlock throughout. Jack is constantly given a series of mini quests that can be accomplished in order to get giant Skill Fire bonuses, and the extra time you invest here can equate to a stronger and more satisfying fight time. For example, the “slide” move can be unlocked for a couple thousand Skill Fire, but unlocking it then adds three mini quests for you to accomplish so many slides (which is done by walking and then pushing L while walking). I took three minutes and immediately did something like 200 slides, getting all three quests finished and gaining a net profit of 9000 Skill Fire, thus being able to upgrade several other skills. If you’re willing to grind, you can make Jack impossibly strong, particularly if you set the difficulty to the lowest level (which, oddly, is referred to as “Jack”). Replay comes from higher difficulty settings, which include more HP on the grunts and bosses, better reactions and blocks to your fighter, and fewer drops all around. 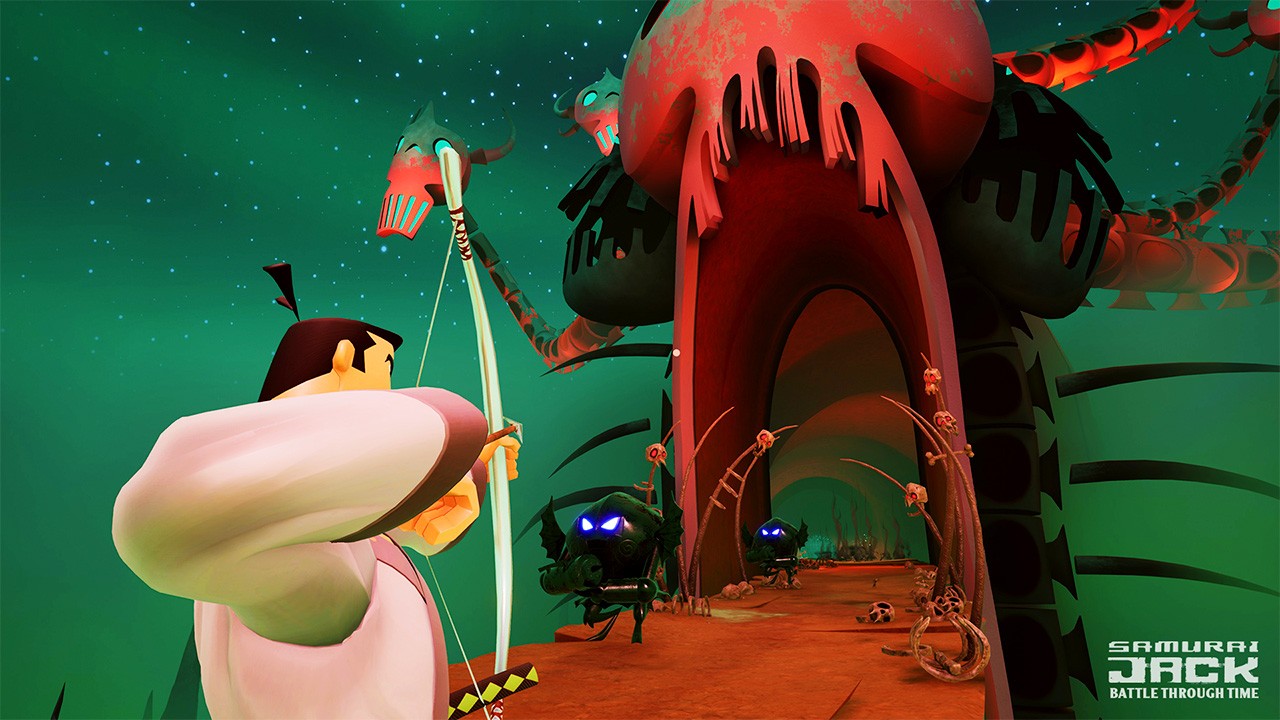 Like all tie-in games, though, the main draw for Samurai Jack: Battle Through Time will be fans of the series, and they’re in for a fantastic treat. The opening of the game is literally the opening sequence from the television series. Certain cut scenes are animated, with others being done in a cell-shaded, CG sort of system that doesn’t look bad at all. Jack emotes throughout, and it’s fantastic that Adult Swim could convince all the original voice staff to come back and add lines for the different speaking characters. The game becomes a clip show/reel of who’s who in the Jack universe, with you meeting, fighting and befriending nearly every major character. The ending of the game, spoiling nothing, differs from the ending of the series, which might behoove some players who were less than satisfied with the conclusion to season five. It’s not a clear and present cash grab: there’s plenty of good, exploratory and replayable substance to feed your Jack fix. Probably not forever, but at least for a few good playthroughs, and it certainly stands head and shoulders above certain tie in games that wasted my life and my memory card.

The performance on the Switch is also decent, with only a few moments of stuttering or lagging as we move between settings and never showing up in mid combat. For younger players, the – button will help direct you to where you’re supposed to go next if you get turned around during the 3D experience. And, truthfully, it helped me out plenty. The game is linear enough, but there’re rewards for exploring and smashing everything, so what could be a five hour game can easily be stretched out to eight hours, with new difficulty levels to try. Jack fans who are full of trepidation need not be: this is the Samurai you’re looking for.

Don’t think of it as the sixth season: consider this a bonus featurette of Jack that gives some “what ifs” and enjoyable, interactive mini episodes.