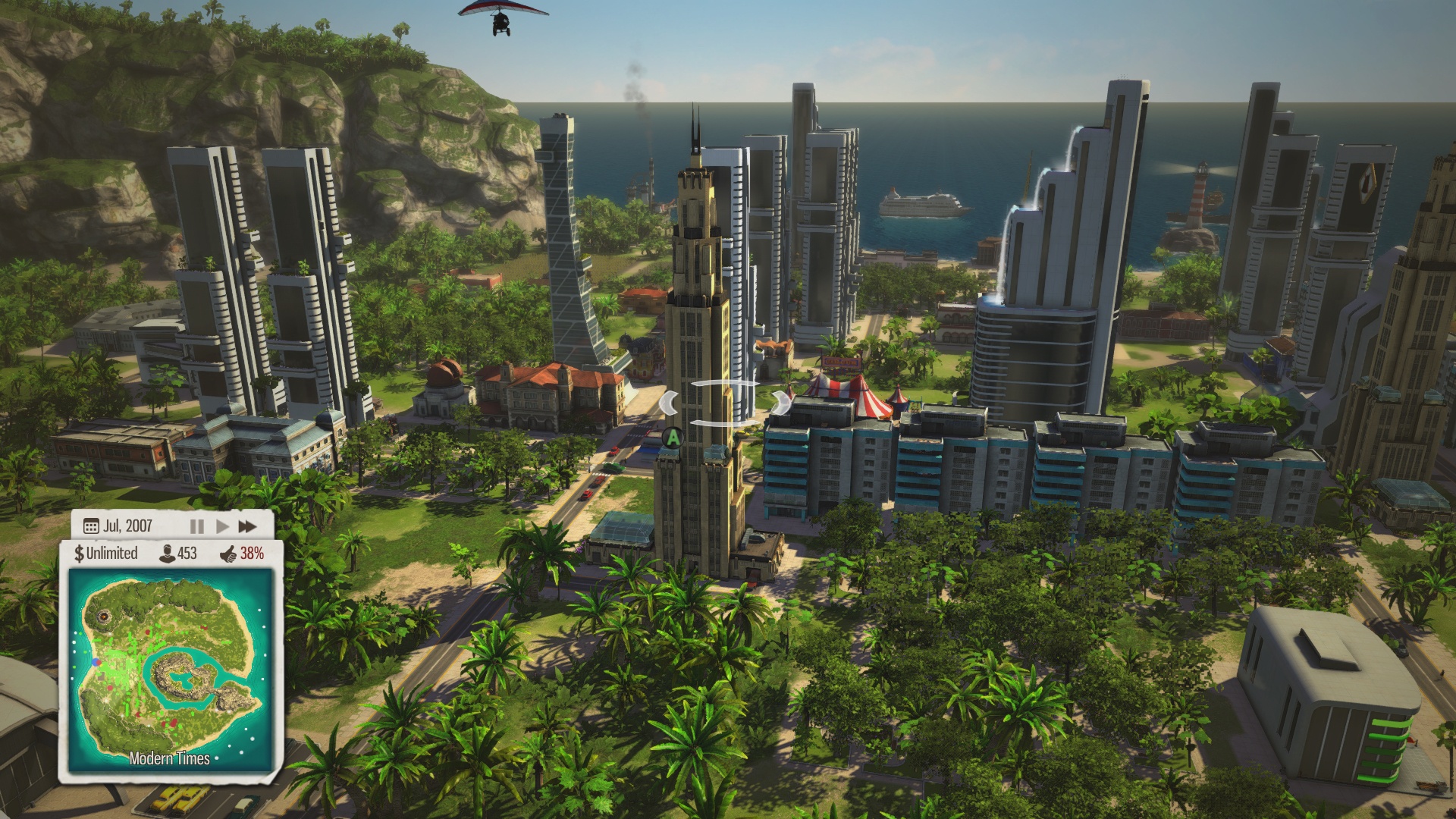 As a fan of the Tropico games since the very first one over fifteen years ago, I can’t help but feel as if I’m experiencing Groundhog Day once again. What do I mean by that? Well, following the acquisition of the Tropico license from Take Two in 2008, Tropico 5 is the third game in the series to be released by Kaylpso Media, and to the untrained eye, it is almost completely identical to its predecessors. Also worth noting is the fact that whilst I’m reviewing Tropico 5 (along with the Penultimate Edition extra content) for the Xbox One, the game has already been available to PC and PS4 gamers for some time now.

With all of the above said, I am genuinely happy to see the return of Tropico to a Microsoft console. I have to admit that I find the gentle, strategy-lite gameplay to be hugely relaxing, with a focus on long-term objectives rather than instant gratification. Tropico 5 is not the kind of strategy game that requires rapid, precise movements across the map, and there is no unit selection or other feature that would truly benefit from a mouse and keyboard, so the game really does fit with the aspirations of a console strategist.

The Xbox One version of Tropico 5 is labelled the Penultimate Edition and includes a total of five DLC packs. To be honest, each DLC is barely noticeable on its own, but together with the base game, the package is quite comprehensive. There is a decent tutorial, a sizeable, surprisingly challenging campaign, a number of equally (if not more) tough scenario modes (that include most of the extra content) and a multiplayer mode that I was unable to test due to a lack of other players. Both co-op and competitive modes are offered however, and assuming that they are technically sound, this is a rare and very welcome addition to a console based strategy game.

Whatever mode you choose, Tropico 5 is essentially a management simulator that places the player in control of a small, Latin American island modelled in style of Cuba, for example. It has a deeply satirical style, with characters, art, inhabitants and missions that combine to create a totally unique and genuinely fun game. The setting and style also allow for a completely bonkers storyline, and that in itself ensures originality and enjoyment that is rare in games of this type. 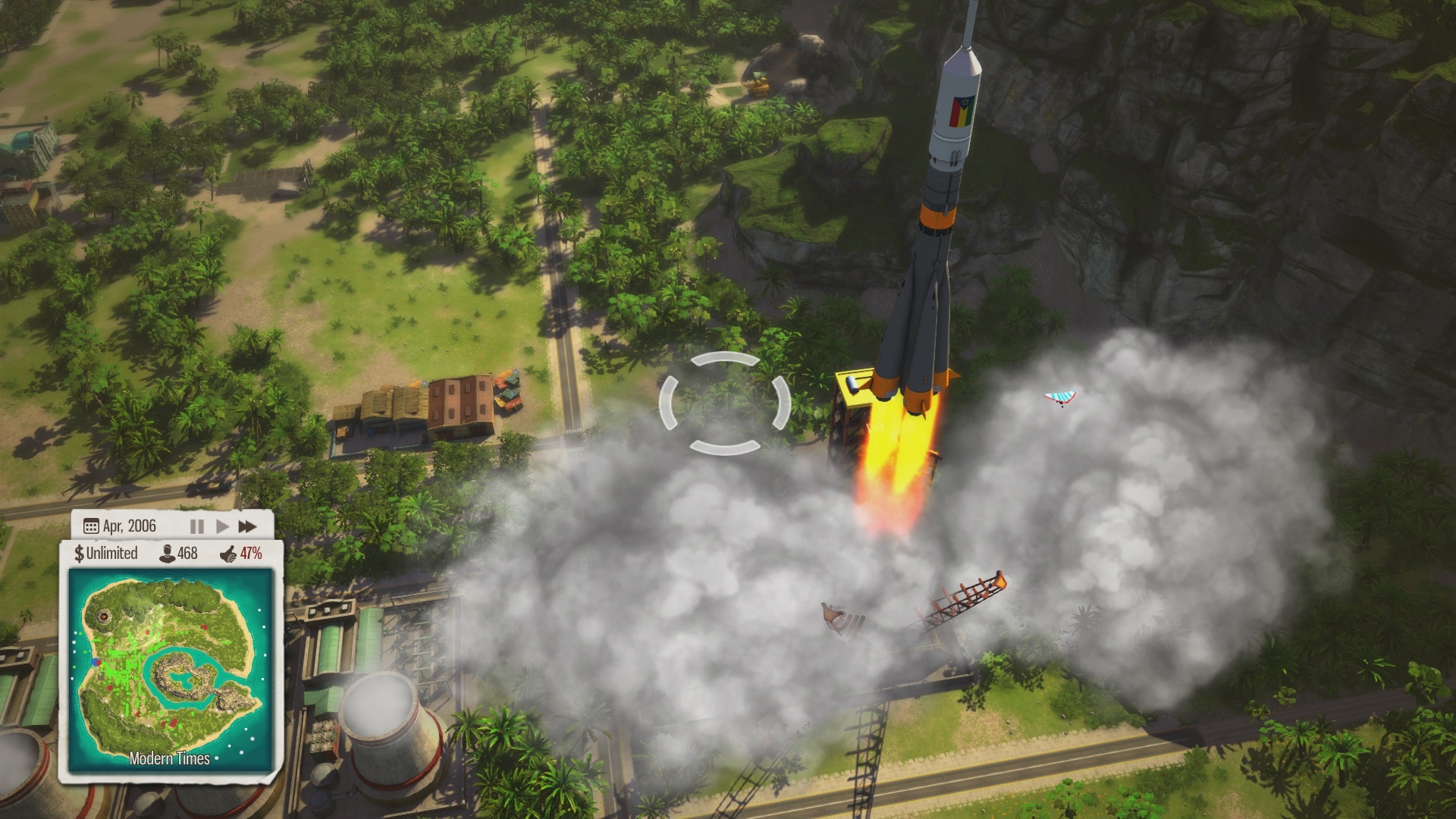 Players will begin by setting up a basic economy. This usually involves exploiting the natural resources of the island and exporting them, with logging and basic crop or animal farming providing the bulk of early income. As the game progresses, further sources of wealth become available via mining, or drilling for oil, but the real long-term financial benefits come from industry. Tropico 5 provides the ability to refine raw materials into more valuable products, such as creating rum from sugar, or logs into planks, and then into fine furniture.

Setting up this financial infrastructure is simple, although it is poorly explained in the tutorial. Once the relevant buildings have been constructed for each industry, goods move around the map (and out to export) automatically, but only if there are enough teamsters to handle the load. A number of other, similar functions also happen automatically, and almost all settings can remain at their default level without major detriment to the way the game plays. For those who prefer a more hands on approach, almost all buildings have settings that can be changed to increase efficiency, decrease running costs, apply upgrades or hire and fire managers that provide various bonuses.

Sadly, setting up buildings and hoping the money will start rolling in is rarely a winning strategy in Tropico 5. The people of Tropico are fickle, and one of the most crucial parts of the game revolves around ensuring that they remain happy, well fed and focussed on their work. To ensure this, the player must meet a fairly varied range of basic requirements ranging from healthcare to religion and entertainment. As if this wasn’t enough, each Tropican has his or her own social agenda and ideals, meaning that some value wealth, whilst others the environment or science.

Many of these agendas are organised into political factions within the game, and another key part of being a Tropican president is managing the expectations of these various groups. If you fail to consider the requirements of one or more groups, or if you neglect the population as a whole, uprisings and ultimately rebellions will occur. More unrest breeds more rebels, and ultimately, poor dictators will find themselves thrown out of office under the barrel of a gun. 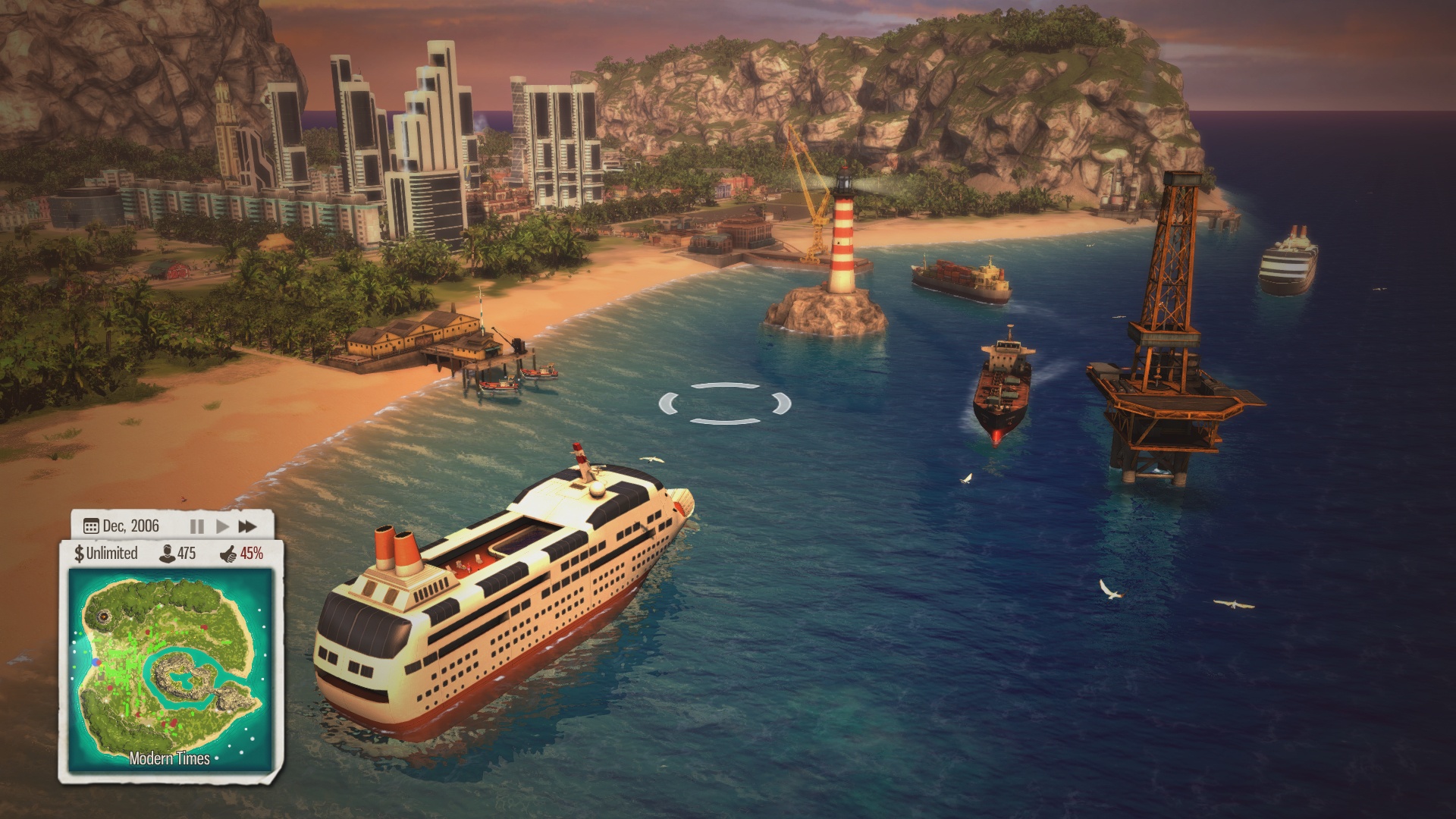 Civil strife isn’t the only occasion that leads to conflict either. Sometimes, rival islands will invade, and various superpowers may also lay claim to Tropico due to it’s presumably valuable strategic position. Combat is a simple affair in Tropico, and like most things, victory really comes down to how well prepared the island is. Various military buildings can be constructed and each provides an amount of troops or, new to Tropico 5, a division of tanks. Combat happens much more frequently in this iteration of Tropico than in the previous games, marking it as one of the major differences. Thankfully, it often provides a welcome change of pace, and it was certainly underutilised by previous games.

Certainly the most original feature in Tropico 5 (over its predecessors, rather than strategy games in general) is the fact that the game is now broken down into four eras – Colonial, Great Wars, Cold War and modern. Each brings with it new challenges for the player in the form of different world powers vying for control, and because various technologies or social ideologies become available. For example, upon progression from the Colonial era to the Great Wars, the basic ideals of democracy and human rights begin to emerge, as does the availability of industrialisation technologies such as machinery. Each era brings with it challenges and opportunities, and balancing the changing expectation of the populace with the need to maintain control and profitability is one of the most rewarding features of the game.

The game features quite a few minor tweaks to other features that have appeared in past games, but at no point does the game feel like it offers anything particularly new or different to the past two games at least. Sure, the Xbox One hardware provides a graphical upgrade in comparison to the Xbox 360, but even that is fairly minimal. I personally continue to lament the loss of the amazing soundtrack that accompanied Tropico 3, seeing as both Tropico 4 and 5 lack the same level of Latino panache.

As a huge fan of the Tropico series, I’m delighted with the package that Tropico 5 Penultimate Edition provides, but I certainly don’t think I would recommend it as highly to someone who had recently invested in Tropico 5 on the Xbox 360, for example. I’m also reluctant to state that there is anything fundamentally new or different here that would attract players who might have tried previous versions, and found them lacking in some way. Yes, Tropico 5 is the most polished iteration to date, but it is essentially still a very, very similar game to Tropico 3 and 4. Perhaps the saving grace (and the most exciting bit) will be the multiplayer, and it’s regretful that I’ve been unable to test it in time for this review. When all is said and done, I still love this game series, but I’m not sure how long I can defend Kalypso for releasing such a similar rehash time and time again.