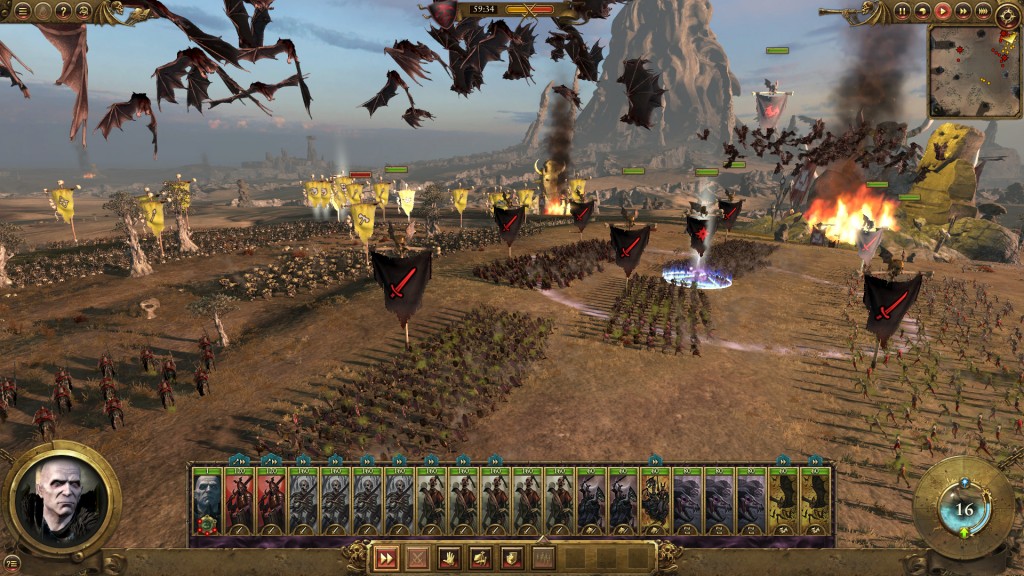 I’ve always loved the Total War games, and I’ve played each and every one since the original Shogun: Total War exhaustively. And, since that very first iteration of this now iconic series, I’ve been longing for the news that we all knew would inevitably come; that Creative Assembly would be making a Total War game based on Warhammer. And now, thirteen years following Shogun, here it is, and boy, it’s good. Really good.

The Total War games are famous for the introduction of relatively minor, iterative changes from one version to the next, but the world of Warhammer simply blows the doors off everything I thought I knew. Sure, the interface is definitely familiar, and battles play out in much the same way as they always have, but this isn’t the historically accurate map of ancient Rome, or the calm, ink on bamboo of feudal Japan. The world is altogether more fantastical, with Dwarven cities hewn from unlikely mountain passes, and the putrid pink and black of the Chaos wastes, twisted by corruption.

On the battlefield, things become even more unexpected, with the full plethora of Games Workshop models recreated in gorgeous high-resolution, often featured in unit sizes that are simply not possible on the kitchen table. Not only is this shift from traditional infantry, cavalry and other very human military units a major visual change, it also changes the way that Total War: Warhammer plays in fundamental ways compared to its historic cousins. 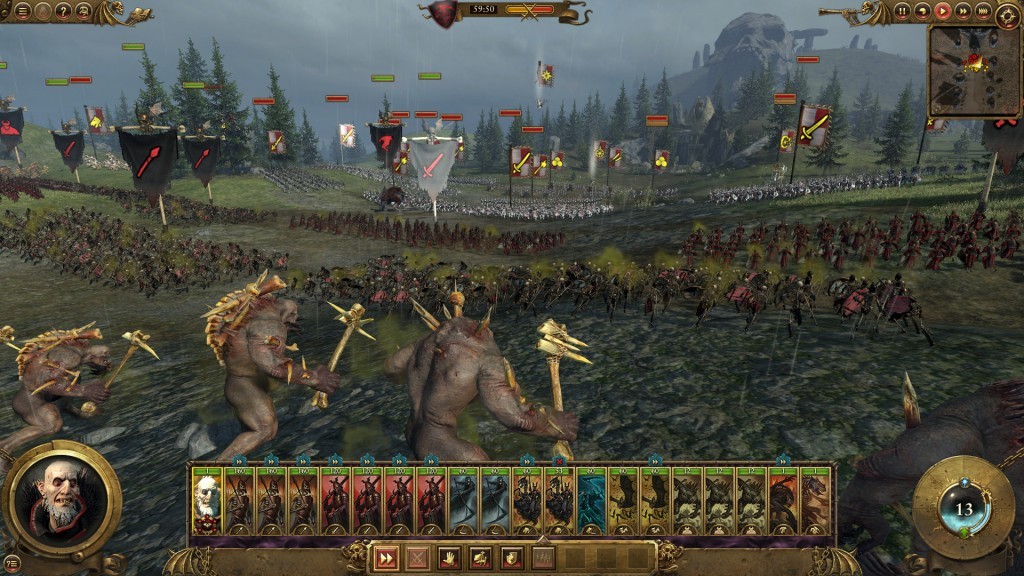 Let me give you an example. Have you ever considered how a traditional army of human rank and file infantry, perhaps supported by a cannon and a Bright Wizard plus a unit of cavalry might stand up against a horde of Greenskins and their legions of brutish orcs, devious goblins and monstrous trolls? Total War: Warhammer will give you a hundred ways to answer the question, not to mention an infinite toy box full of other combinations of creatures to play with should you so desire.

Because it still features the same core mechanics of the Total War engine, Total War: Warhammer is a proper strategy game, and as a result, players really do need to learn how to handle the manifold monstrous threats that appear in the game. Take the previous example as a case in point; Empire armies are fairly large, predictable and easy to manage, whereas Greenskin armies bring more variety, for better or worse. Brutish Black Orcs provide the heavily armoured centre, whilst goblins provide haphazard support in the form of fairly weak archery, or through comical and unpredictable artillery such as the Doom-Diver Catapult. Instead of the Empire Steam Tank, the Greenskins have access to Trolls and other monstrosities, and each of the units I’ve described here has its own strengths and weaknesses. Some of them are more or less pure spectacle, whereas others are unstoppable without the right counter threat. Hero’s, Wizards and other individual units add yet another dimension to combat, with some specialised in taking down the larger, more lethal threats that belong to the enemy.

Another significant change in Total War: Warhammer is the siege battles, which have been completely revamped to suit both the slightly more fun presentation of Warhammer, and also because frankly, they’ve needed it. The new siege battles focus almost entirely on a subsection of the city walls, with a much greater focus on action as units now simultaneously attempt to breach the walls and the gate simultaneously. Siege battle AI has reportedly been improved considerably, and to an extent it appears to be true, I suspect largely because of the simplified scope of the battles. In any case, the desired effect of making things more exciting has been achieved, and players will need to meet the challenge of multiple threats when besieged. Similarly, when attacking enemy cities, many of the old tactics than ran rings around the AI are no longer possible, although a well planned strategy will often be successful at even remotely favourable odds. 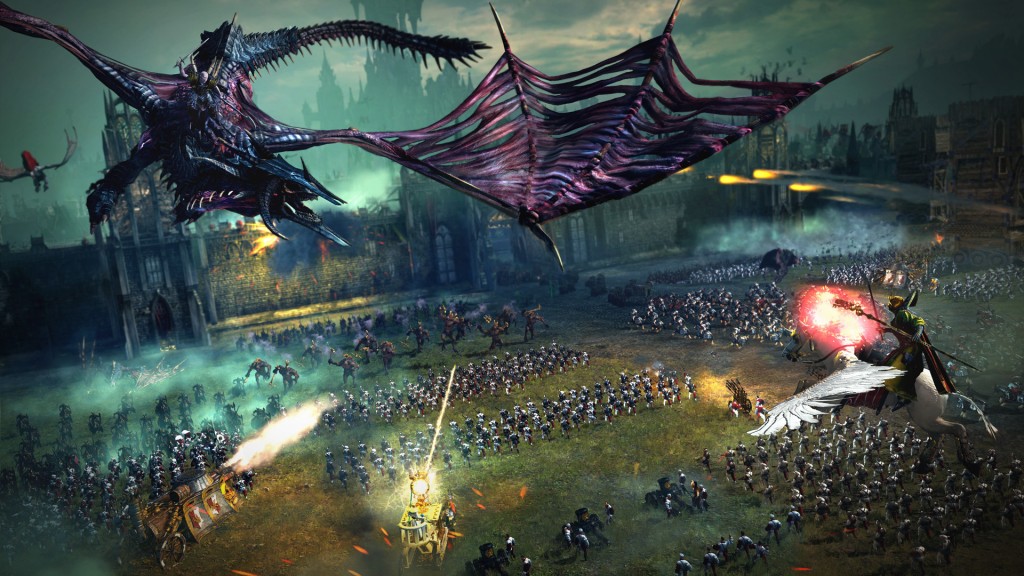 Considering the variety offered by each of the playable races in Total War: Warhammer, it may come as a surprise to some that the base game actually only allows access to four of those races; the Empire, the Dwarves, the Greenskins and the Vampire Counts. Some people who purchase the game will gain access to the Chaos Hordes on day one, but they were not playable in my review copy of the game. Knowing as I do that the world of Warhammer contains numerous other races such as the Brettonians, various Elves, Skaven, Tomb Kings, Lizardmen and more, I can only assume they will be introduced as payable DLC. To be fair, this approach might actually be justified, because the effort expended in designing each race and balancing each of its unique units must be quite a task, plus there is tremendous scope for unique and interesting add-on campaigns for those other races, should Creative Assembly be encouraged to create them.

Total War: Warhammer is also one of the best looking and most robust Total War games I’ve played. The game runs better than Total War: Attilla does on my moderately powerful gaming PC based on the same settings (high) and averages a fairly smooth forty frames per second with no noticeable drops. The chunky Warhammer characters (reminiscent in style to Dawn of War) suit the Total War graphical style better than I expected them to, and as a result the license feels completely at home in the Total War shell.

In summary, Total War: Warhammer is almost everything I hoped it would be. It is perhaps the best use of the Warhammer license that I’ve ever seen, easily rivalling the Dawn of War series (which is thankfully different enough that I don’t need to decide which is better or worse) and perhaps delivering a game that is dangerously capable of pleasing both Total War and Warhammer fans alike, because of how well it handles the strengths and weaknesses of each. Sure, it’s no longer a case of rewriting world history, and true, trolls can actually be killed in Total War: Warhammer, but the balance of benefits comes together to create a great looking, interesting and often challenge take on large-scale, real-time strategy.