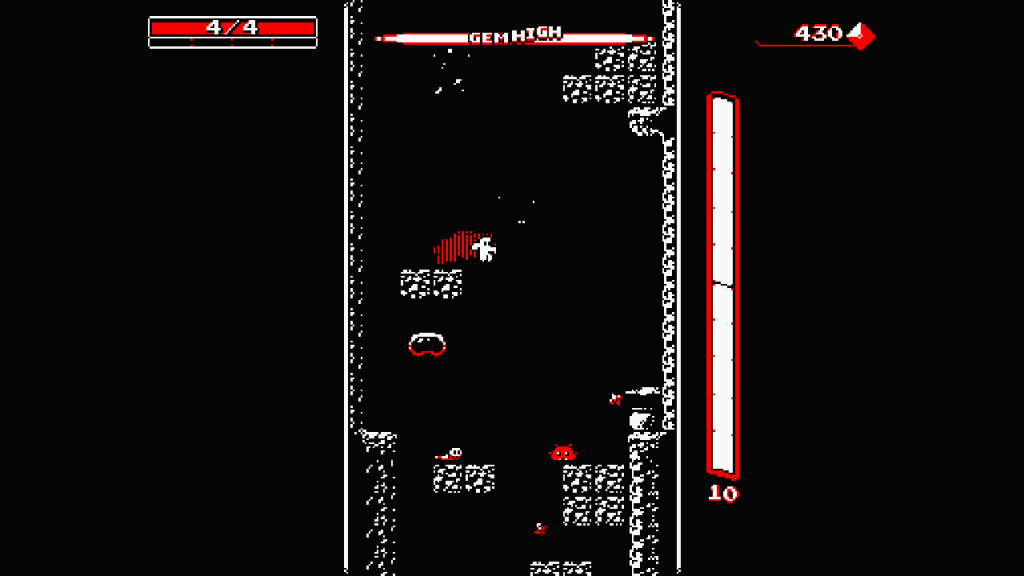 Strap on your gun boots! It’s time for an addictive little adventure into the depths of ‘Downwell’, the latest indie game by Moppin & Devolver Digital to come to the PS4 and the Vita. You play as a character simply known as ‘Curious Man’ who has decided to jump down a well to find out what monsters and hidden treasures lie beneath.

‘Downwell’ is an arcade style platform game which is incredibly easy to pick up but extremely difficult to master. Originally built as a mobile game, the action takes place in a vertical shaft which means you play with huge borders to the left and right of the screen. You begin in a park and the game starts once you leap into the well. From then on you only travel in one direction and that is down. The well contains ledges, breakable blocks, a range of hostile monsters and as you start to get deeper there are a few other hazards to avoid. Think of it as a stripped back version of Spelunky.

Since this was originally designed to played on a touch screen, the controls have been boiled down to three simple inputs. The D-pad is used to move your character left and right and a single face button is used as both jump and fire. In order to shoot using your gun boots you simply have to press the jump button while in mid-air. Shooting your weapon will cause you to hover for a couple of frames so repeatedly shooting can make life a little easier while you are free-falling.

You begin every run with 4 points of health and 8 bullets. During your run you may encounter opportunities to restore or even extend your health meter which is important since there are no extra lives or continues. Once your health depletes you have no choice but to begin a fresh run from the top of the well. You can recharge the bullets in your weapon by either bouncing off an enemy or landing on a ledge, so if you wish to free fall for long periods it’s best to bounce on as many enemies as you can in order to keep your ammo up. 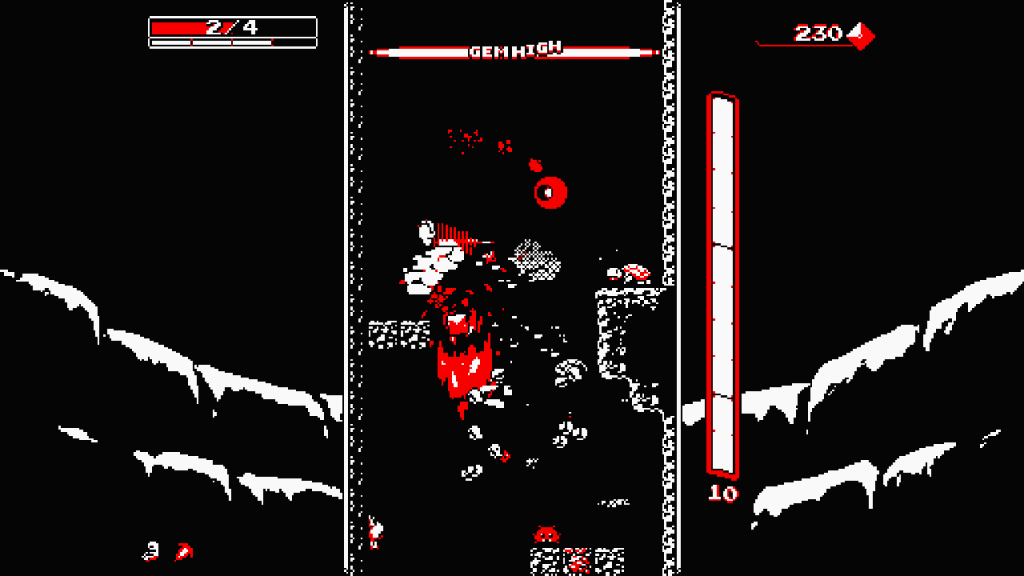 As you begin your decent you’ll encounter different enemies, all with their own movement patterns and behaviors. Some enemies are safe to jump on without getting hurt although others are deadly to touch and can only be attacked using your guns. Each time you destroy an enemy they will burst into gems which you can collect and use as currency. Killing a combination of enemies without touching the floor will also grant you bonus gems so it pays to try and freefall for as long as possible.

Every so often you will come across caves which lead to either shops or other goodies. Shops grant you the chance to buy health or extend your ammo capacity. Other caves contain either mounds of gems or alternative weapons. Different weapons will deplete your ammo count at different rates depending on how powerful they are. It’s fun experimenting with the different guns and finding which ones work best for you. I particularly favour the triple shot which is a three-way spread gun, and the shotgun which uses a lot of ammo but creates a good blast radius. Depending on how you play, you may prefer some of the other choices such as the laser or the more rapid fire options.

The stages are generated at random so you have to rely on your skill and quick wits rather than memory. There are 4 areas in total consisting of 3 stages each plus a final boss. Once you have reached the end of a stage you will be able to choose an upgrade from a random selection. These upgrades will last until the end of your run so the further you go, the more you can stack up. The upgrades have various different effects. There is a discount card which makes shops cheaper, a laser sight to help you aim more accurately, a satellite which orbits you as you play, there is quite a decent selection.

For such a simple premise, this game is actually highly addictive and very challenging. Reaching the later levels is no mean feat and actually beating this game may seem a little out of reach for average gamers. However, since each game is usually pretty quick and it’s just fun trying to better your score, this is a game that offers something for players of all abilities. 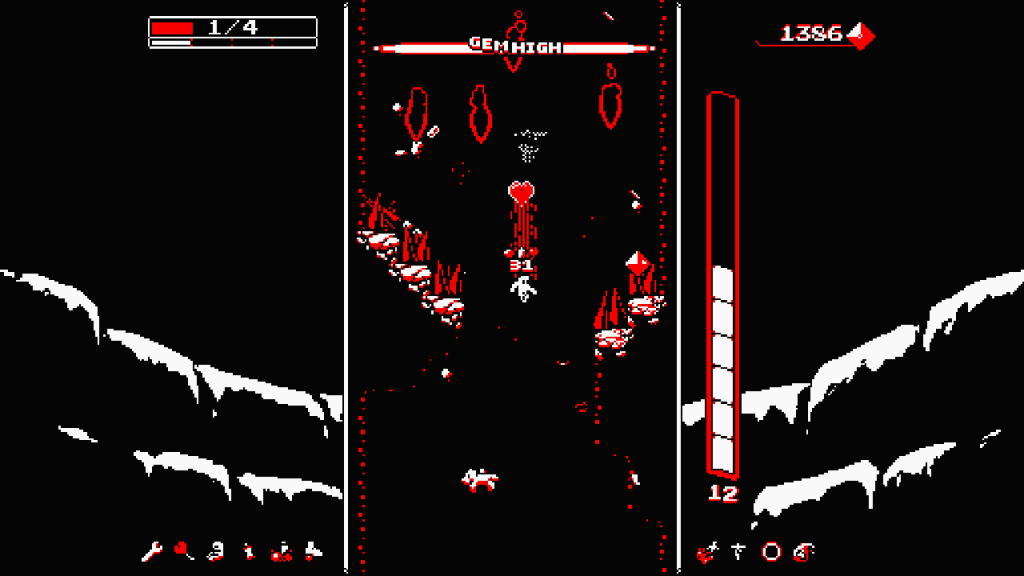 The presentation is extremely retro in style and the graphics look a bit like something found on the ZX Spectrum. Only three colours are ever used at once (one background colour, a main foreground colour and one last colour for detail). By default the pallet is set to black, white and red, however as you collect gems you can unlock a variety of interesting alternative pallets that you can switch around at your leisure. The music is all chip tune based and the sound effects make for a satisfying arcade experience.

One extra option that you get on the Vita version is the ability to turn the screen vertically which allows you to utilize the entire screen as you play. Although this does make everything a lot easier to see, I did find that holding the Vita this way didn’t feel particularly natural. Even though holding the Vita horizontally makes everything appear quite small, I could still play the game pretty comfortably this way while I was on the go.

Personally I’m really enjoying this game. Each run is unique which keeps it feeling fresh after multiple attempts. It’s priced at only £3.99 for a cross-buy bundle containing both the PS4 and Vita versions. It’s fantastic value for multiple hours of arcade action and I recommend giving it a try.