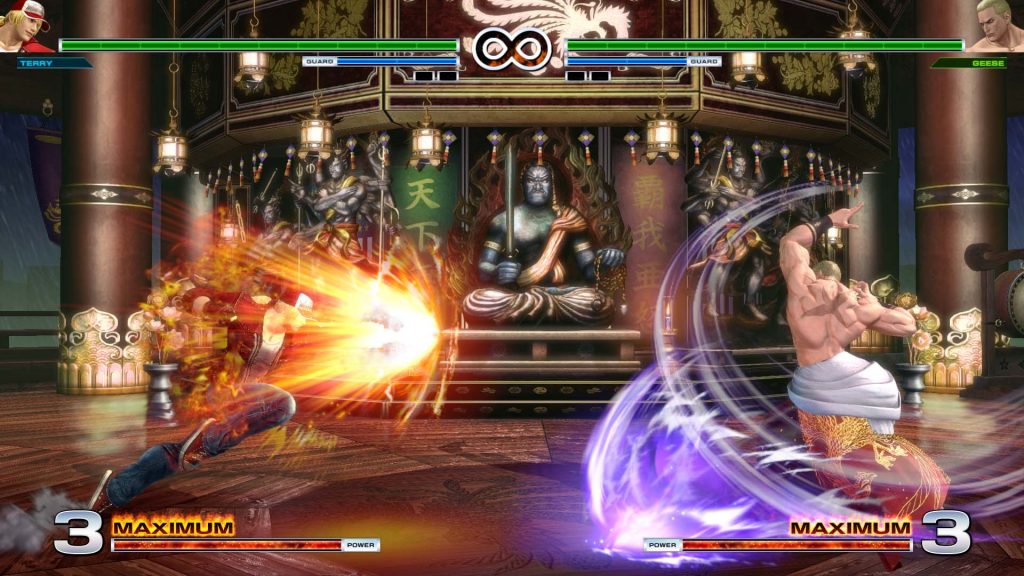 If you’ve been following King of Fighters XIV in the build up to its release, you’ll probably know that a lot of the narrative has been centred around the games’ new visual style, because, well, SNK’s latest isn’t much of a looker. This emphasis on the aesthetic design of the game proves both fair and unfair – it’s unfair in so much that the core gameplay is absolutely fantastic, but fair in that, yes, King of Fighters XIV is rather ugly.

Ok, so before we get around to the good news (there is plenty of it), let’s get the ugly out of the way nice and early. King of Fighters XIV is not a great looking game. ‘Ugly’ is probably pushing it, but still, this is one of the more artistically disappointing entries in the series. After the gorgeously redrawn sprites used for its visually spectacular predecessor King of Fighter XIII, SNK, perhaps in response to Capcom’s successful move to 3D character art for Street Fighter IV and V, have ditched the much loved sprite based characters of XIII and replaced them with an inoffensive, but ultimately bland collection of 3D rendered fighters. Again, nothing about this game is outright offensive to look at, but there is no doubting that, from a purely visual perspective, XIV is a step backward for the series. The backgrounds are perfectly acceptable, and like the characters themselves, there is no shortage of variety, but there is simply no getting around the fact that the art style chosen is horribly insipid. The animations are certainly impressive, and technically, it’s completely sound – any issues one might have here are all down to a specific artistic choice, one that provides a notable blemish on an otherwise outstanding fighter.

With that out the way, we can get to the good stuff, which is, I’m glad to say, just about everything else. Unlike the criminally undercooked (albeit still brilliant), Street Fighter V, KoF XIV is a complete and fully featured gaming experience straight out of the box. There is a lengthy if expectedly bonkers Story Mode, a relatively comprehensive training mode, a decent selection of Mission modes and a Trial mode that allows you to try your hand at some of the more taxing combos available amidst the games’ extensive move-set and player options. When a fighting game has three different types of jump, I’m sure you can imagine just how deep the rabbit hole goes in this regard. On top of this, there is the usual selection of Arcade Mode, Time Attack, Survivial mode, Quick Play and, of course, online combat. Yeah, this is no Street Fighter V. 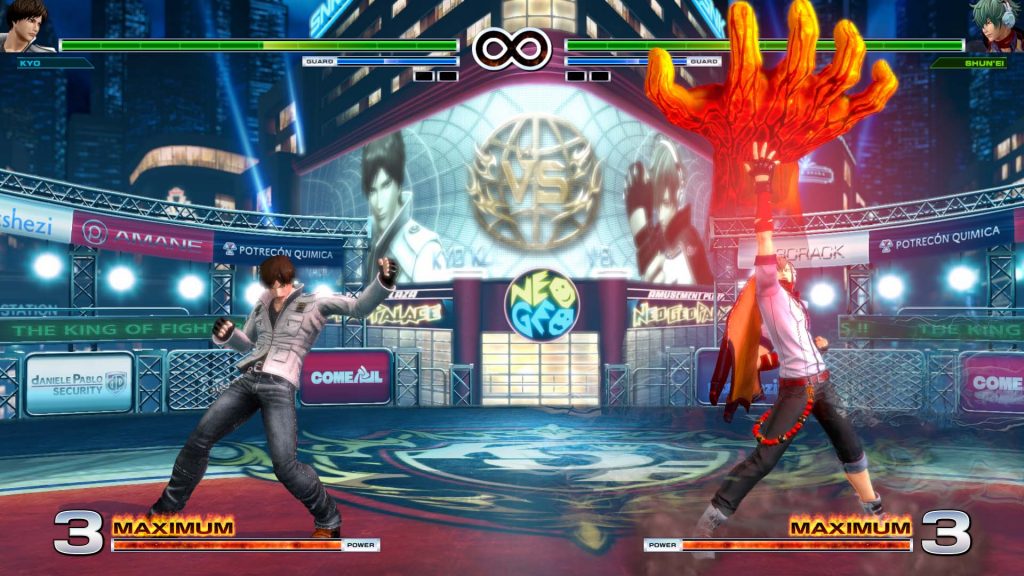 While there is plenty of content to keep fans of single player brawling happy, for KoF to compete with the big boys and get its claws into the ever popular e-sport scene, it’s going to need a comprehensive, and above all else, stable selection of online options. While this is relatively tricky to judge ahead of the games’ release, I can say that, from what I have experienced, all the signs are very positive. Beyond its ample collection of 1v1 and classic, KoF, 3v3 battles, the virtual arcade style system of waiting for combat while being able to view any number of battles currently taking place seems both smooth and well designed with fights often coming quicker than they do in Street Fighter V’s equivalent system. Other modes and levelling are pretty standard, but with Party Battle Mode also making an appearance, KoF XIV does make the most of its relatively unique 3v3 battle system.

Unlike other fighters on the market with a similar system, KoF’s 3v3 system doesn’t allow for swapping between characters meaning that line-ups are locked in before battle with the chosen combatants staying on the field until they are KO’d. This unique, if somewhat antiquated system allows for an online Party Battle Mode in which up to 6 players can be involved in a single fight with each taking control of a specific character. Of course, that can lead to a whole lot of nothing if you’re the third fighter in a successful team, but I for one enjoyed the team battle structure, one that allows you to build up a team mentality in what is traditionally a one man show.

While the list of game modes and online options is undoubtedly impressive (especially in light of Street Fighter V’s paltry selection at lunch), it is, as always, the core gameplay that remains King of Fighters strongest attribute. With an extraordinary 48 playable characters available right from the get go (with 2 unlockable boss characters taking the total number to a cool 50), it would be easy for KoF XIV to turn into something of an uneven mess, but while some new characters are inevitably stronger than others, just about all of them appear to be viable options for competitive play. 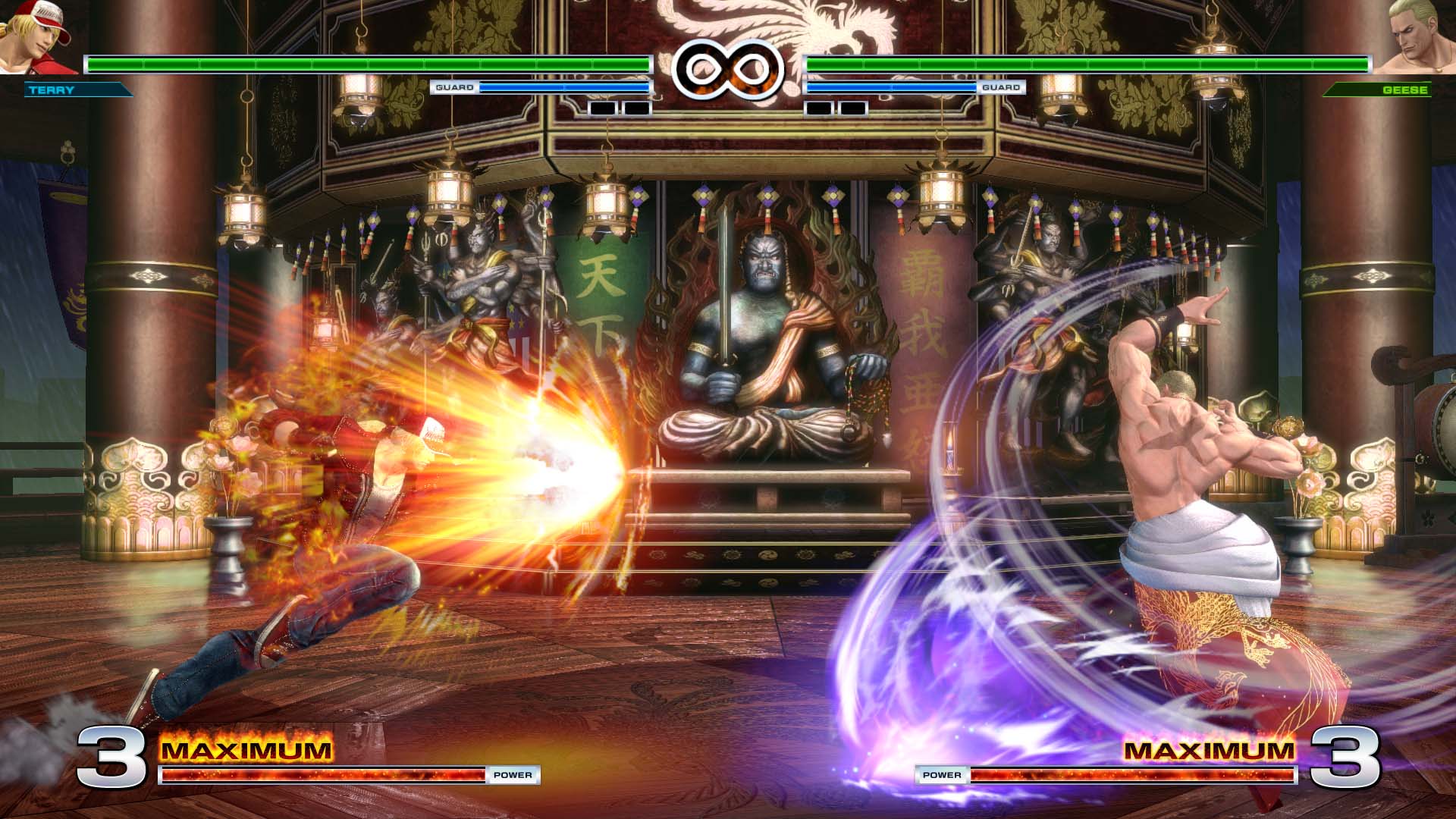 It helps of course that, despite its almost exhaustive depth, KoF XIV is actually one of the more accessible fighters on the market (if nothing else, it’s surely the most accessible King of Fighters title released for the best part of a decade). Much of that is down to the inclusion of the controversial, ‘Rush Mode’ mechanic that allows beginners to pull of visually spectacular combos by spamming a single button. That same combo will also end with a pyrotechnic-rich super attack if you happen to have your special meter filled up at the time. Of course, it would be easy for the hardcore to put their nose up to the inclusion of such easily achieved fireworks, but in practice, it affords new players a sense of immediate satisfaction while more seasoned players are provided with more than enough in the way of counters and alternatives to deals with these relatively cheap combos in battle.

Sure, you could argue that personal progression is not helped via an overtly simplistic combo system, but if KoF XIV has any chance of succeeding on the level of the Street Fighters and the Mortal Kombats of this world, it needs to be more accessible to the middle ground, something it does here without negatively effecting the hardcore. If anything, beyond the newb-friendly, Rush Mode, KoF XIV, thanks in part to its diverse 48+ strong cast, remains, above all else, a hardcore gamers delight.

The new 3D visual design of King of Fighters’ vast collection of combatants is undoubtedly disappointing. After the gorgeously re-drawn sprite work of XIII, King of Fighters XIV’s rather bland art direction feels like a notable step in the wrong direction. Despite this artistic faux pas though, the latest in SNK’s long running and much loved King of Fighters series is amongst the finest that the team has ever delivered and a genuine match for the current genre leaders. Both accessible and deep, SNK’s brawler manages to keep the hardcore happy while successfully appealing to a more casual crowd. Whether it will garner the kind of global success that it deserves remains to be seen, but as it stands, an argument could be made for King of Fighters XIV being the finest brawler of the generation.