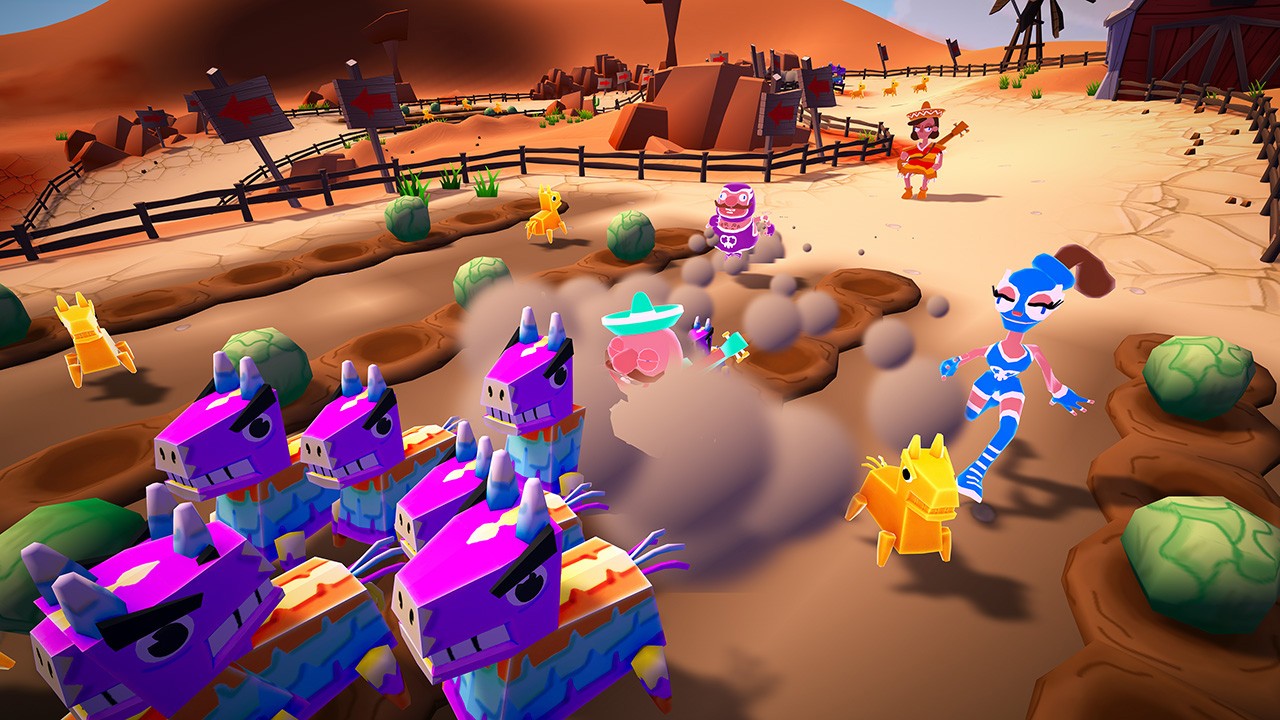 It’s sometimes difficult to get people on board with the simple ideas. Take, for example, the concept of bread and butter. Sure, it sounds basic enough, but did you know that bread and butter goes with almost every meal? Soup, steak, breakfast, it fits and compliments incredibly well. Still, the stigma of eating butter as a primary ingredient is often enough to scare off would be tasters. Understandable, but wrong nonetheless.

When it comes to Must Dash Amigos, the multiplayer racing/competition game from miniBeast Game Studios, the entire premise hinges entirely on that first word. Multiplayer. This is something that we’ve already seen become the backbone for a lot of big AAA titles that are being pushed out by studios far larger with much deeper pockets. After some significant blowback in recent iterations, gaming crowds have been fortunate to see titles like Call of Duty focus a bit more on the single player aspect, but not a lot: after all, why bother making a storyline or content when you can let the fans do it for you? The difference is, these games have a certain mystique about them that allows for this sort of design. Star Wars Battlefront II may have been an absolute mess at launch, and the comment about lootboxes continues to be one of the most toxic things ever launched on the Internet, but you can’t disagree with the mentality. People wanna play as Darth Vader or other popular characters. They have the leverage to get away with it. 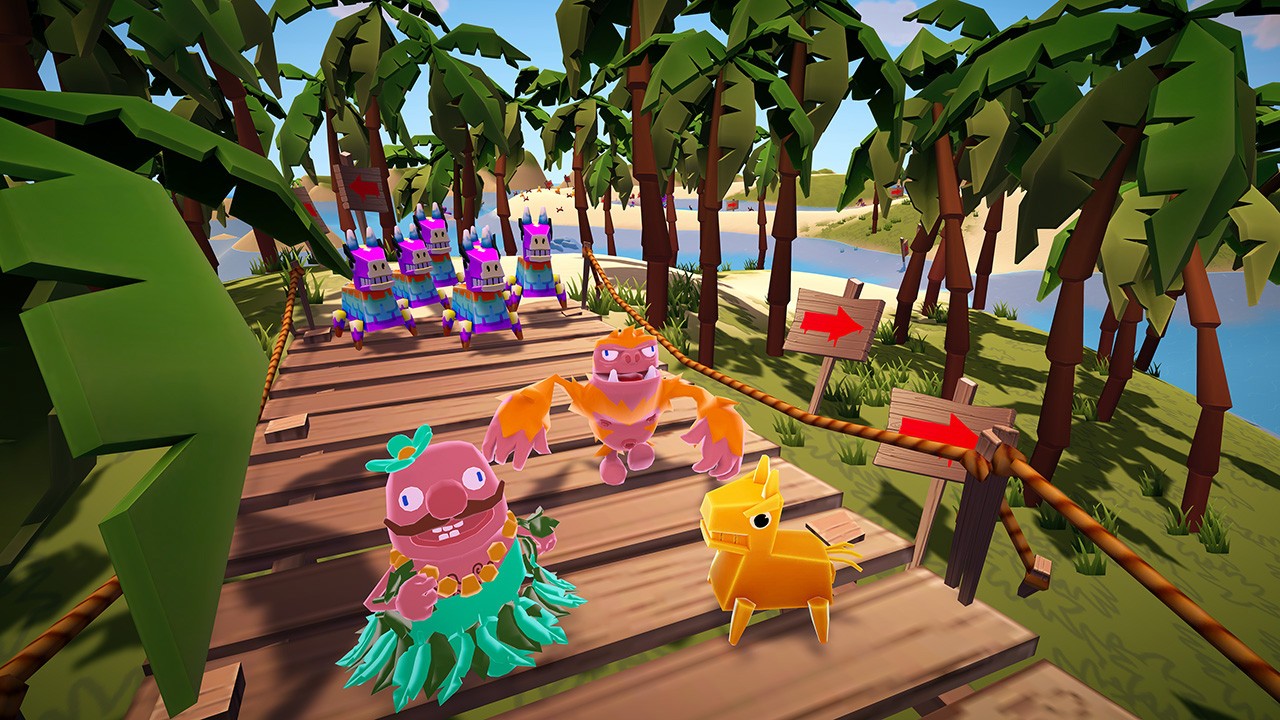 Must Dash Amigos is lacking that level of prowess, and it comes across in a big way after playing approximately five rounds of the game. Our game is about a bunch of characters who are all in a sort of Latin theme of characters who are racing against each other across different landscapes. The single player mode isn’t nonexistent, but the way it comes across is more of a casual shrug of a game mode than any real effort. Instead of doing races against AI characters, you’re able to do time trials and “challenges” to see if you can complete objectives, like finishing a course in a certain amount of time (which means it’s a time trial with pressure). This does a bit of something, as it gives players a chance to see what the game is like at the core. After all, it’s a single JoyCon approach that can be fun under the right conditions. You run around several different tracks, moving from the desert to the jungle and beyond, and have to outrun and outwit your opponents. Part of this is done through the collection of pinatas that appear on the screen, and, like real pinatas, the contents can be secretive and exciting, or potentially damaging. There’s nothing quite like grabbing an exploding pinata and needing to damage yourself with it because there’s no one else on the course.

Anyways, time trials get boring real fast, and the challenges fluctuate wildly from interesting to tedious, though that can also be up to how much or how little you seem to enjoy the game. One of the first challenges in Must Dash, Amigos is to navigate a course in under a certain amount of time while also piloting TWO characters at the same time. This is, in theory, challenging because they run in similar fashions, but your brain can’t always handle doing mirror inputs on something that fundamentally looks different. However, there’s also exactly nothing standing in the way of giving the second JoyCon to a friend and having them run along with you, which makes it so much faster and honestly more satisfying to complete. Sure, maybe you haven’t flexed your prowess in the realm of autonomous play, but you’ve done what the game ultimately wants you to do, which is to have a friend on hand.

Seriously, if you don’t have someone else to play this game with, Must Dash Amigos falls to pieces immediately. Having a full roster for any of the game modes immediately raises the interest and excitement of the game overall. For example, four players under a normal race mode creates a Speedrun-esque challenge where you are doing your best not to fall behind amid obstacles, damaging powerups and the occasional stampede of psychotic pinatas. Oh, right, the pinatas. They aren’t just golden powerup boxes you can grab along the way. They’re also angry, autonomous things that will, on occasion, go full herd and try to stomp you to death for no apparent reason. Trying to navigate the narrow catwalks of rooftops in a suburban sprawl are difficult enough under normal circumstances, but when your friend has suddenly gotten a hammer and everyone looks like avacados, you need to do your best to stay afoot and stay alive under what are dire straits. When everyone is together, that’s where the fun lies. Even two players feels a little static and simple, as most of the powerups can potentially be game changing, so having more targets and more chances to escape make it infinitely better. 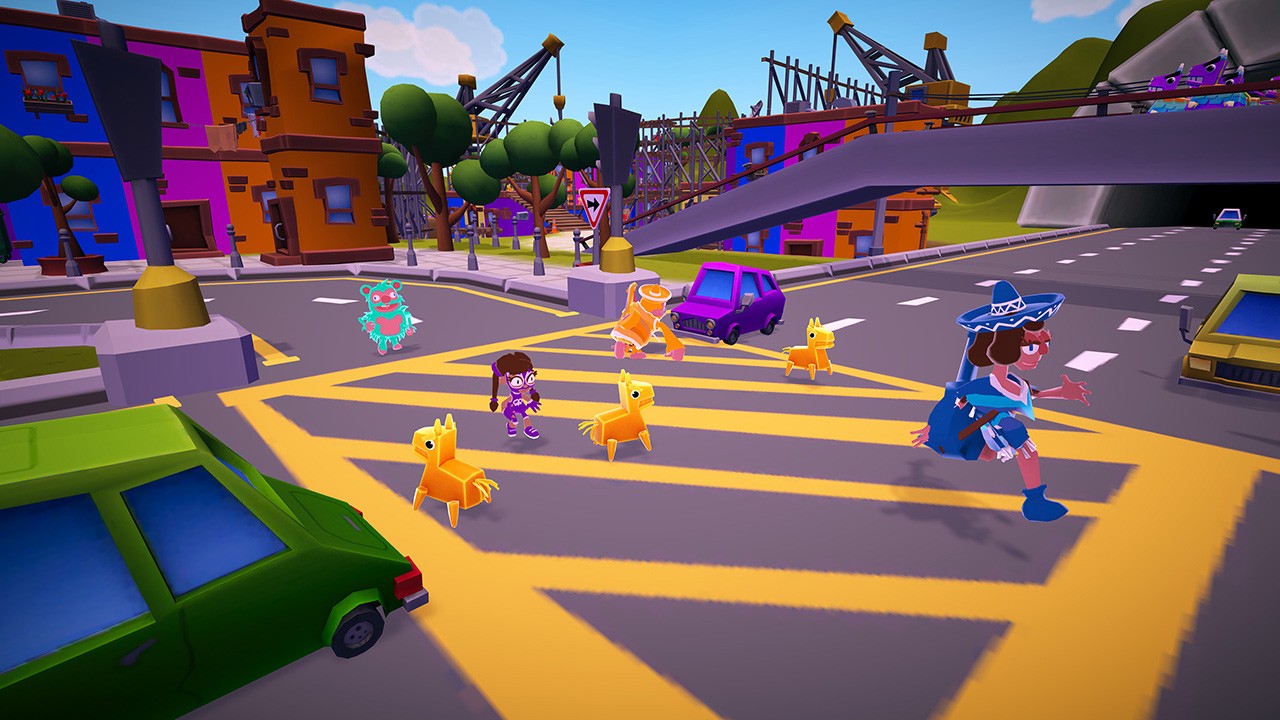 The humor and the graphics of Must Dash Amigos are cute enough, though nothing to write home about. You’ve got a luchador, a senorita, a little girl and some kind of gorilla man, in a variety of colors, dashing down streets and alleys, across rope bridges and perilous planks, all in the name of survival. It’s got that random humor element to it, but it mostly works for when you’re together with friends. I have to harp hard on the word together because there is zero online matchmaking, which is another tragic blow for the game. I totally get bringing everyone together to make the face-to-face showcase more interesting, but it’s just not always feasible. Plus, it means that, when you’re alone, you’re reduced to the simpler play styles mentioned above or doing the cheesy thing of having a “second player” which is a JoyCon being held by nobody, and that’s boring. So instead you need to wait, patiently, for family to come home or friends to come over to make the most out of this game.

It’s cute, it’s interesting, and it works well when you’ve got the right combination together, but there’s a lot of conditional work at stake to make Must Dash Amigos sing. To be honest, though it’s a popular, party system, the Nintendo Switch works best for the single player, especially the new Switch Lite, and this game is positively wasted on the Lite players. If you’re looking at a long winter and your kids/friends have already had their fill of other party games, this one could be a fun time filler across a few days. Just don’t expect this to bring anything to the fiesta if you want to play as a lone hombre.