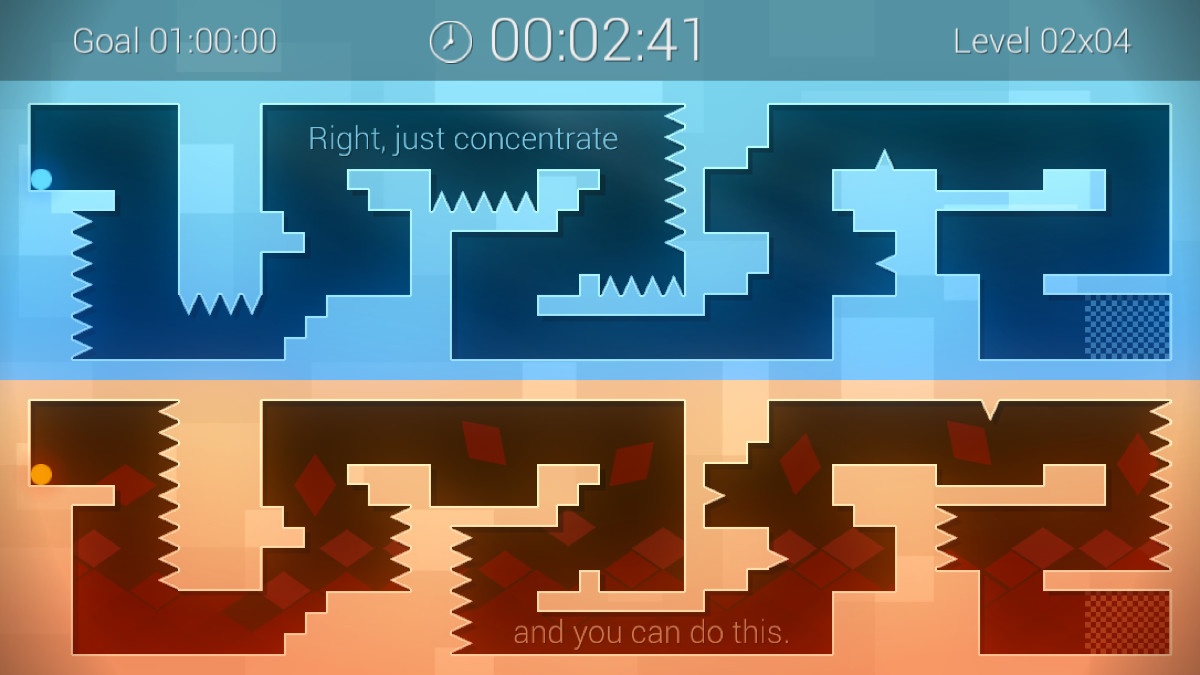 Binaries is a classic puzzle platform game which will test both your skill and your patience. It resembles games like Super Meat Boy and Vvvvvv, as it demands a high level of concentration and logical thinking. There are countless games like this on Steam but they struggle balance difficulty and enjoyment; as these types of games tend to be really easy and somewhat boring, or too challenging and infuriating. However, I believe Binaries gets the balance almost perfectly as you are required to think in steps rather than just rush through and beat the whole game in an hour.

The concept of Binaries is that you control two balls simultaneously, a blue ball and an orange one. The aim of the game is to get each ball to their respective coloured goals, working through an array of spikes and obstacles in the process. This idea sounds pretty simple, and I assume this has been done before on some level, but this game does a good job of making each level more interesting as the gameplay gets more complex. There are 101 levels to play through so there is certainly lots to do, you also get graded on the time you complete the level in. So, if you wanted to, you could become the Binaries Master and get and S Rank on every level. 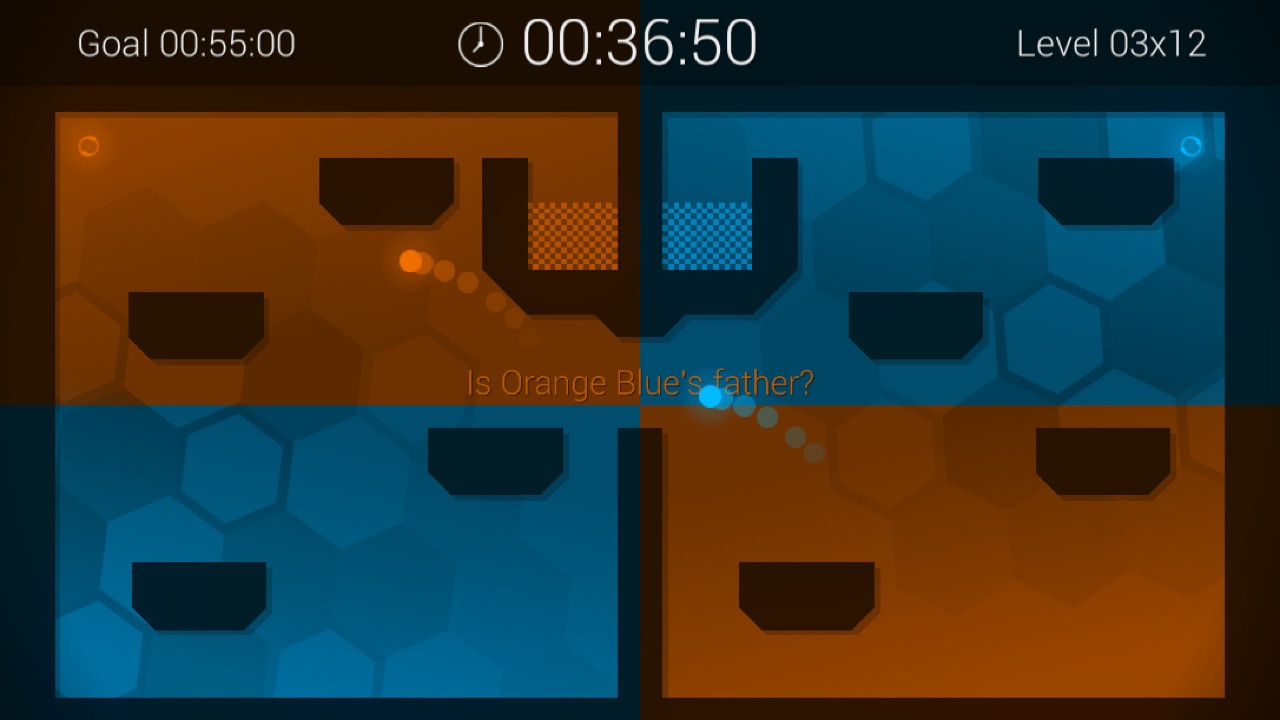 The level selection is laid out like a bunch of balls with multiple columns (sort of like the Blockbusters Game show), although my description may be shite, the point I’m getting at is that you can always move on to another level if you find yourself stuck. This option really is useful in these types of games, as it allows you to apply skills learnt in the later levels to beat the stage you were stuck on earlier. The levels get more and more challenging as you progress, and seeing as there are 101 levels there are a lot of difficult challenges to take on.

Binaries also has some humor to it with some of the text that appears in the levels and menus. This gives off a sort of Portal vibe as you are patronized when doing easy levels, the way this is done doesn’t seem force either; the game can be genuinely funny at times. There isn’t much in terms of other modes for the game but what is offered in terms of puzzles if more than enough to play without getting bored. It’s also the sort of game you can jump into and getting puzzlin’ without any wait, which is a disadvantage in games such as Professor Layton. 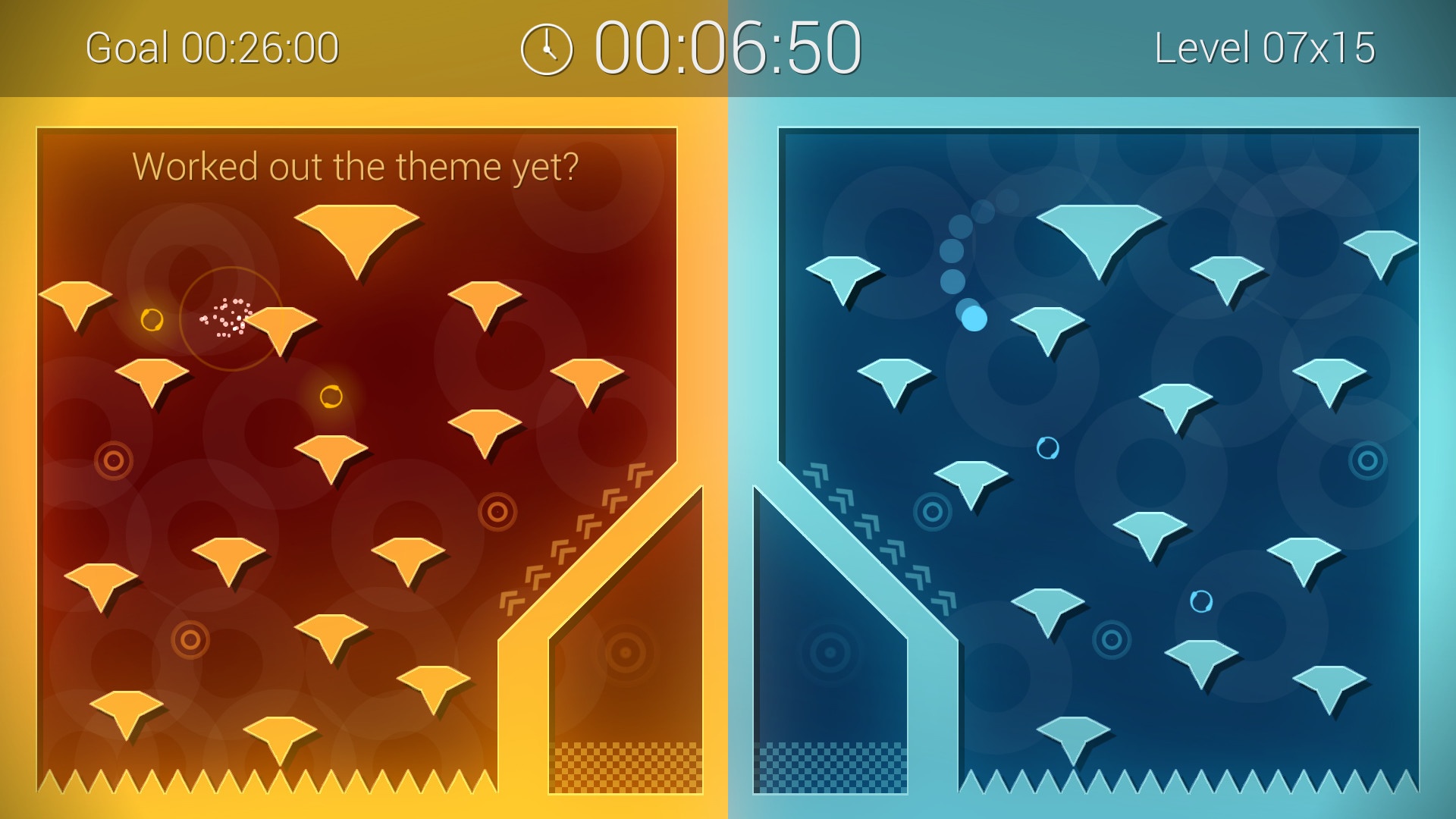 Features like the art style and the music aren’t very complex, and that’s what I would expect from a small scale puzzle game. Binaries doesn’t try to bombard you with loads of complicated visuals to pretend it’s something it’s not, this is a puzzle game plain and simple. I find it nice to play a game where you can just get straight into it without faffing about with anything else, the game being simple is definitely a good thing.

Overall I’m going to give Binaries an 8, as for a simple puzzle game its very high quality. There is a lot to do and even more for completionists, I didn’t experience any errors at all and my experience was very good. The minimalist style to the game gives it a clean and simple feel, so there are not bells and whistles to get in the way of your puzzle fun time. If you’re looking for a challenging brain work out or even something to do between Overwatch matches, then Binaries is the game for you.