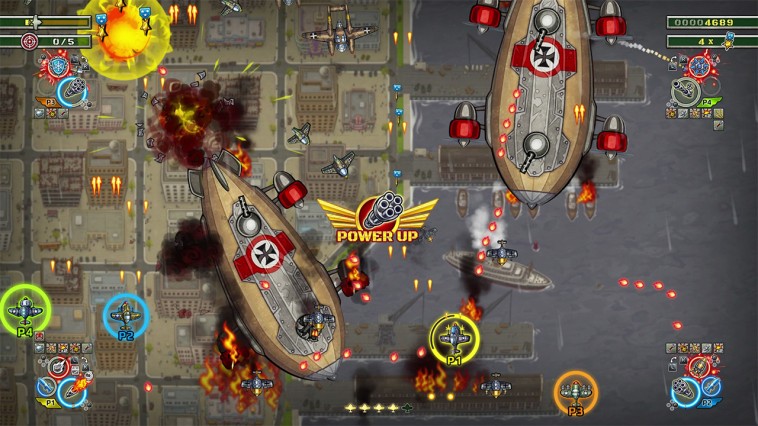 HandyGames isn’t a studio I had necessarily heard of before. Coming out of Germany, it seems a ton of mobile games have been created and a handful ported to the PC and other consoles, but nothing that really seemed groundbreaking. So when Aces of the Luftwaffe: Squadron came across my desk, I wasn’t really sure what to think, and had no idea what I was getting myself into. Many of you may look to the original Aces of the Luftwaffe that’s on PC and mobile and think “that doesn’t look great.” You’d be right, the original is pretty simple and uninspired. This new version, however, has some tricks and moments that genuinely caught me by surprise.

Let’s set the stage. It’s 1946. World War II is coming to a close, and people are looking forward to life getting back to normal. But wait! There’s something in the sky! Is it a bird? Is it a plane? No, it’s a TON of planes, and they’re all German, and they’re back with some of that insane alien technology we all know Hitler was working on but never got up and running. Coming over the English Channel, the Germans have brought the fight to America, and they’re pulling out all the stops with lasers, UFOs and creepy mechanisms as far as the eye can see. It’s time for us to pull up by the bootstraps and fight back. Don’t worry, America: four of the most incompetent, inefficient and often incontinent pilots ever are coming to defend you!

Aces of the Luftwaffe: Squadron is a topdown, STRIKERS1945 style shmup that puts you in charge of one or four planes, depending on if you decide to play solo or co-op. I recommend doing the co-op if you can, because having four pilots take on wave after wave of enemies is a lot easier than doing it solo and having a three plane buffer that may or may not get shot while you’re dodging. Each mission comes with three elements: main mission, side mission and caveat. The main mission is always straight forward: shoot everything and don’t die. If you can’t do that, then this is the wrong line of work for you. Enemy fire on normal mode is pretty intense and dense, and on hard mode it’s terrifying. There’s also a third difficulty level that I can only describe as “hell of bullets.” It’s not true bullet hell because I could still see my plane, but each shot seemed especially potent and I died a lot more than I had in any of the previous modes. 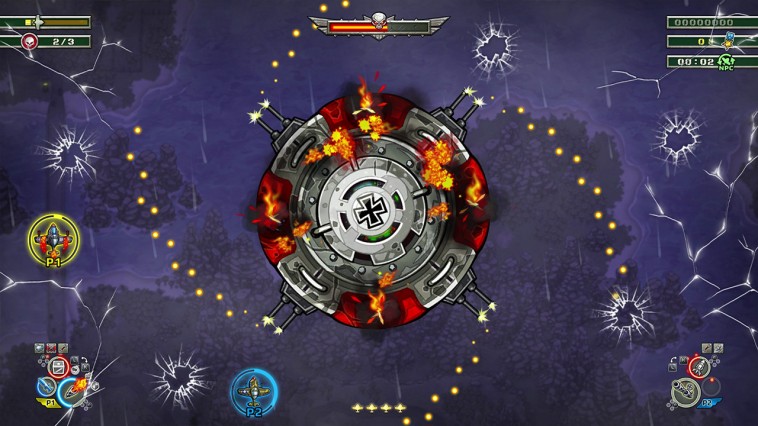 The side missions are interesting and help to generate extra points and goodies. Sometimes it’s taking down a specific set of enemies that appear. Sometimes it’s rescuing people, which means holding still over a group for a few seconds while actively trying not to get shot down. One of the more annoying side missions is the chase, where you avoid being hit too many times while dealing with a huge number of offending projectiles. This was annoying because there wasn’t any other levels previously that were filled with mid-air mines, and now suddenly there were, and what the hell. I get the purpose and it definitely made the side mission more difficult but c’mon.

The caveats are probably both the best and worst thing about Aces of the Luftwaffe: Squadron. Remember how I said the pilots weren’t the best? Well, one of them is afraid of heights and will just straight up leave if you have to change altitudes. One is a narcoleptic and sometimes just falls asleep in the middle of flying, leaving you to defend him from getting hit too many times (I don’t feel like that’s how narcolepsy works). The third gets IRRATIONALLY angry at Germans, sometimes, and starts shooting like crazy everywhere, and suddenly now friendly fire is a thing and you can definitely get hit by this dude. And the squadron leader has, I don’t know, “childhood poisoning” which I think means he’s lactose intolerant at the wrong times. Basically, when he gets a wave of the sickness, you gotta fly slow. These inject some really poorly timed elements of character into the game, and I wanna be pissed but I just can’t be. Who assembled this squadron? It’s borderline hilarious.

One you get your air legs, the game plays out fairly straightforward: shoot everything, collect all dropped items (powerups and medals) and powerup yourself between missions as much as possible. Getting all the weapon crates in a level turns you into a berserk machine by the end of the stage, with lasers and rockets flying everywhere and you basically coasting into the finale. Fine-tuning your ship between stages allows for more special abilities (like a fast-recharging bomb to clear the screen) and unlocking new ships after some boss fights. There are even “rare drops” that can happen during the missions, giving you coins to unlock new skills faster. It’s a shame you’re limited to how many you can unlock per chapter, because everything chapter one offered was unlocked by the third mission and I had to just sit and collect coins for the next two. Then again, Chapter 2 started off with a bang of upgrades, so that’s not so bad. 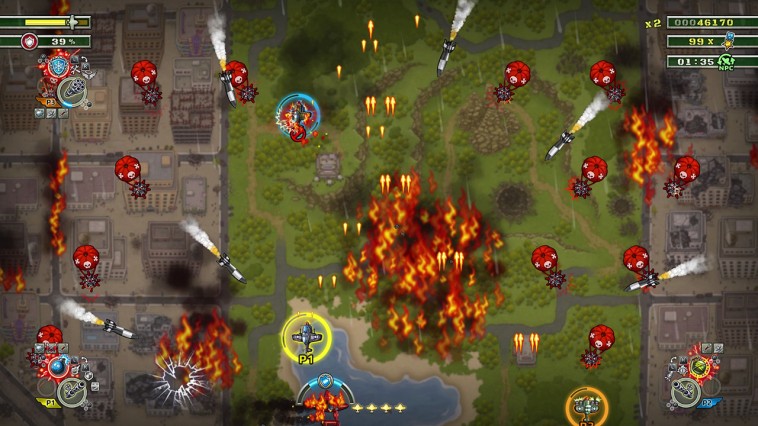 I did like the graphics of Aces of the Luftwaffe: Squadron. HandyGames took some notes from their mobile jobs and made this game pop with some good, round shapes and colorful designs. Far from feeling cartoony, it lent a stronger feeling of care and investment from the team, as things in WWII games tend to be dirty, dark and grimy. Instead, I got a good feel of the world where Hitler was bringing the battle to the American’s front door, complete with how insane things must look once the hidden experiments they were working on came to fruition. Kudos for the design.

Voicework and script for the game are in a different category all their own. A lot of the speech is stilted and blocky, but everyone is a hilarious caricature of what American people must look like to Europeans. The anti-German guy even has a cowboy hat that he flies around in, and this is only compounded by the fact that everyone, EVERYONE has a German accent. I don’t know why, but hearing someone pretend to be American and raging against Germans while clearly being German themselves was a highlight of the game for me. I didn’t want to skip the cutscenes, I wanted to drink in every moment that went into these dialogues. It wasn’t aggravating, it was elating, and I highly recommend checking them out by themselves even if you don’t play the game.

Having said that, I do think you should play Aces of the Luftwaffe: Squadron. This is a great example of a studio doing MORE when it comes to the Nintendo Switch. Rather than just porting an existing title they already made, HandyGames looked at one of their better games and said “how can I make it even cooler for new players?” They succeeded fantastically, and the result is a shooter that makes a mark for both single and multiple players. The game itself is fun, if difficult at times, and there’s a lot of replay baked in with different difficulty levels and different ships to try out and unlock. If you’re at all a fan of vertical shooters, and just NEED to keep shooting at Nazis, then here you go: the plane’s ready.