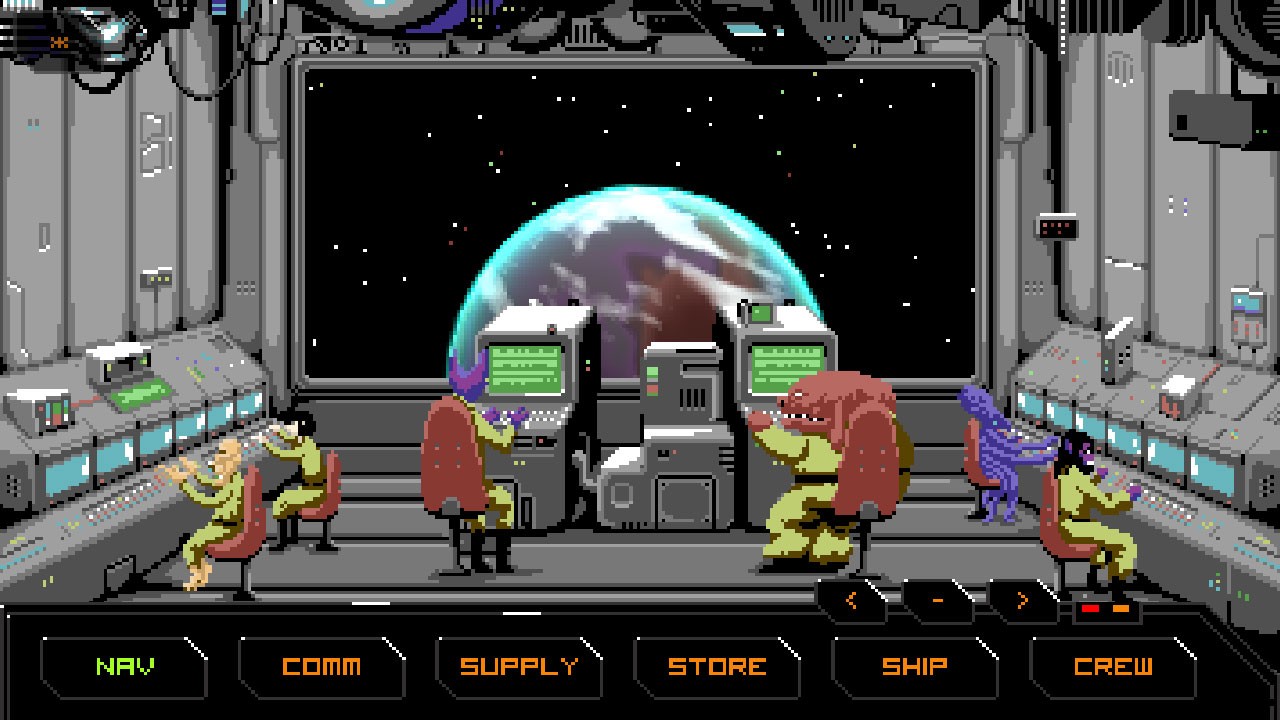 Space: the final frontier. These are the voyages of the starship [insert name here]. Its continuing mission: to deliver a package to Miridian V. To explore strange new worlds. To seek out new life and new civilizations. To avoid the dreaded Telunian Flu. To boldly go where no man has gone before! Sounds exciting doesn’t it? It sounds dangerous too and full of all sorts of hazards, quests and a time-sensitive package that needs delivering. Its also a mission that you can undertake yourself, as you take to the helm within Zotnip Games’ Hyperspace Delivery Service as it jumps to warp speed upon the Nintendo Switch.

If you’ve ever had aspirations to command a crew and captain a starship from the bridge, then this is a game that tasks you with just that; as well as making a delivery to Miridian V, which is your ultimate goal. As the Captain, you are tasked with naming your starship, your crew and their appearance. Once selected, you then dock at the spaceport at Rnarsem Phlan, where you pick up a package that needs to delivered to the other end of the galaxy within 400 days. However, this is no simple jump through hyperspace, as you must ensure your ship is fully stocked, your crew are at their optimum efficiency and that you are well equipped to take on any random events that the vast expanses of space may throw at you.

From the helm of your starship, you can select from a variety of menus that allows you to check on the status of your ship and its crew, view equipment logs, partake in trades and plot a course to your next destination. Because your ultimate destination is too far to make in a single jump, you need to navigate through a series of star system to reach the end goal. However, the galaxy holds many dangers, as well as random events that may bring diversions, side quests or battles in ensuring the package gets to its required destination. Presented in a very old-school way, a style that is very reminiscent of the PC-DOS style of gaming from the mid-to-late eighties, you’ll embark on a voyage that sees you exploiting trade-routes, meeting alien species and civilizations, cutting deals for inside info and intel on planets and systems, partake in space combat and beam down to locations in FPS scenarios reminiscent of the original Doom style of games. 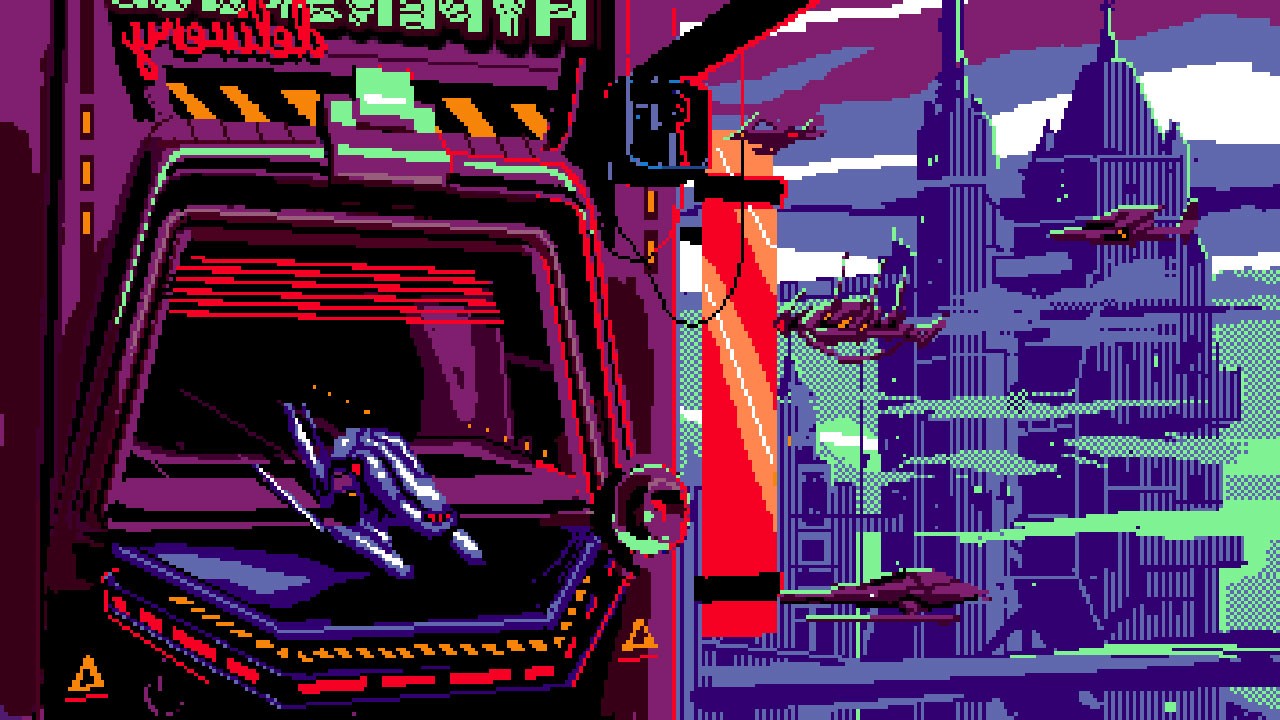 As you jump from system to system, anything can happen can any time, from space pirates forcing you out of hyperspace in combat, received communications or distress calls, meteor showers that need to be avoided and boarding parties that try to steal from the hold of your ship. As well as this, you also need to maintain the well-being of your crew and ensure your ship is fully fuelled, armed and ready for anything. When you reach specific planetary locations or space ports, you can restock on vital supplies, sell goods to make a profit, provide medical assistance to crew members and interact with alien species that may need a job doing, a lift to the next star system or offer vital intel on future destinations.

Although playing as captain of your ship and with so much to keep an eye on, the game never reaches a point of confusion in what needs to be done. In fact, the whole game runs at a really nice pace; creating a fantastic casual experience that you can drop out of and drop in to at any time. Whether you are trawling the menus, partaking in space combat or joining the ground party on FPS missions, the simplicity of the controls makes every task an easily grasped concept. Each jump made or event activated, uses up units of time. With a limit of only 400 days in which to deliver your package, you need to mindful of how long jumps and side quests take to complete. However, you also need to keep an eye on stock levels within your starship, with space ports and missions providing a good source of materials to stock with or sell to buy further resources.

It produces a fine balancing act, one that can be jeopardised at any time with the game’s random elements and encounters that it throws at you. Crew members can have accidents at their station or become ill, pirates can board your ship or blockades can prevent you from reaching certain destinations. With a fifteen to twenty hour campaign, there’s plenty of content here to keep you entertained over the long-term and even though every new game charts you along the same star systems, the game’s random elements always produces a varied and different game with every play through. 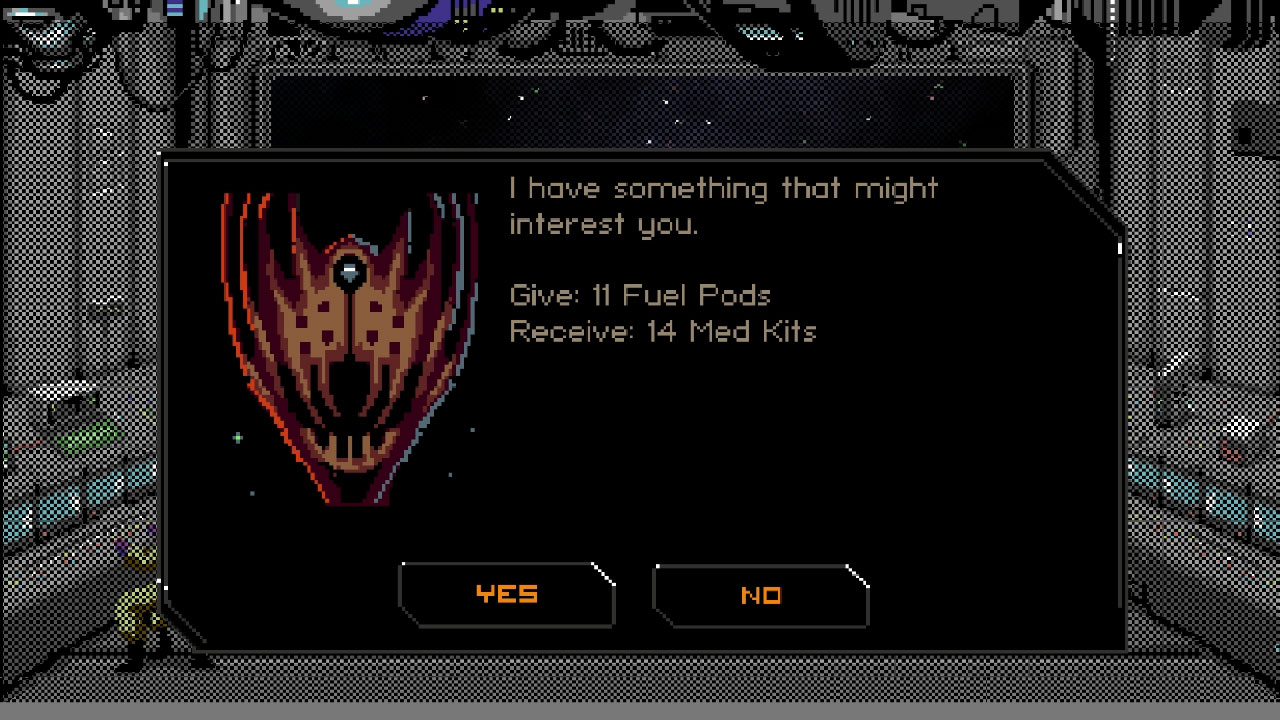 You can also adjust the game’s options in difficulty levels and even switch on a perma-death option to produce a more urgent feel to the game, as well as a sterner challenge. And a challenge it is too, with the game constantly throwing the unexpected at you as you journey across the solar system. It captures beautifully, the feel of captaining your own starship and its crew; making decisions that affects everything that you do and in some ways, produces a ‘make-your-own-adventure’ style of play. Whatever event you come across or decision you make, its outcome can never be guaranteed; sometimes rewarding you with vital supplies or monetary gains, other times you can find yourself within a trap, injured crew or lost supplies.

Everything is presented in a very cool and pleasing aesthetic, from the chip tune soundtracks to the bleeps and bloops of on-ship computers, to the starfields that blur past your view screen and the ground based combat through the corridors and rooms of alien installations and starships. The element of personalisation from naming your ship and picking your crew produces an investment into the well-being of your crew and your ship and the pixel presentations of planets, craft and star bases are beautiful to look at.

Overall, Hyperspace Delivery Service is every wannabe starship captain’s dream. It’s early windows and DOS presentations perfectly matches an old-school retro vibe; one that suits the subject matter of this game perfectly. Although not ‘rogue’ in any way, the constant random elements that the game throws at you, produces a different playthrough every time you embark on your mission and the variety of events and play styles that come across keeps things running along at a nice and varied pace. It’s also a game that sits really nicely on the Switch, with its casual style of play, constant autosaves and the ability to drop-in and drop-out at any time you like. If you’re a fan of sci-fi and, in particular, the ongoing voyages of the Starship Enterprise in Star Trek, then you’ll simply fall in love with everything that this game has to offer, as you find yourself boldly going where no man has gone before!

Become the captain of your own star ship and its crew, as you embark on a wonderful journey to where no man has gone before in Hyperspace Delivery Service.