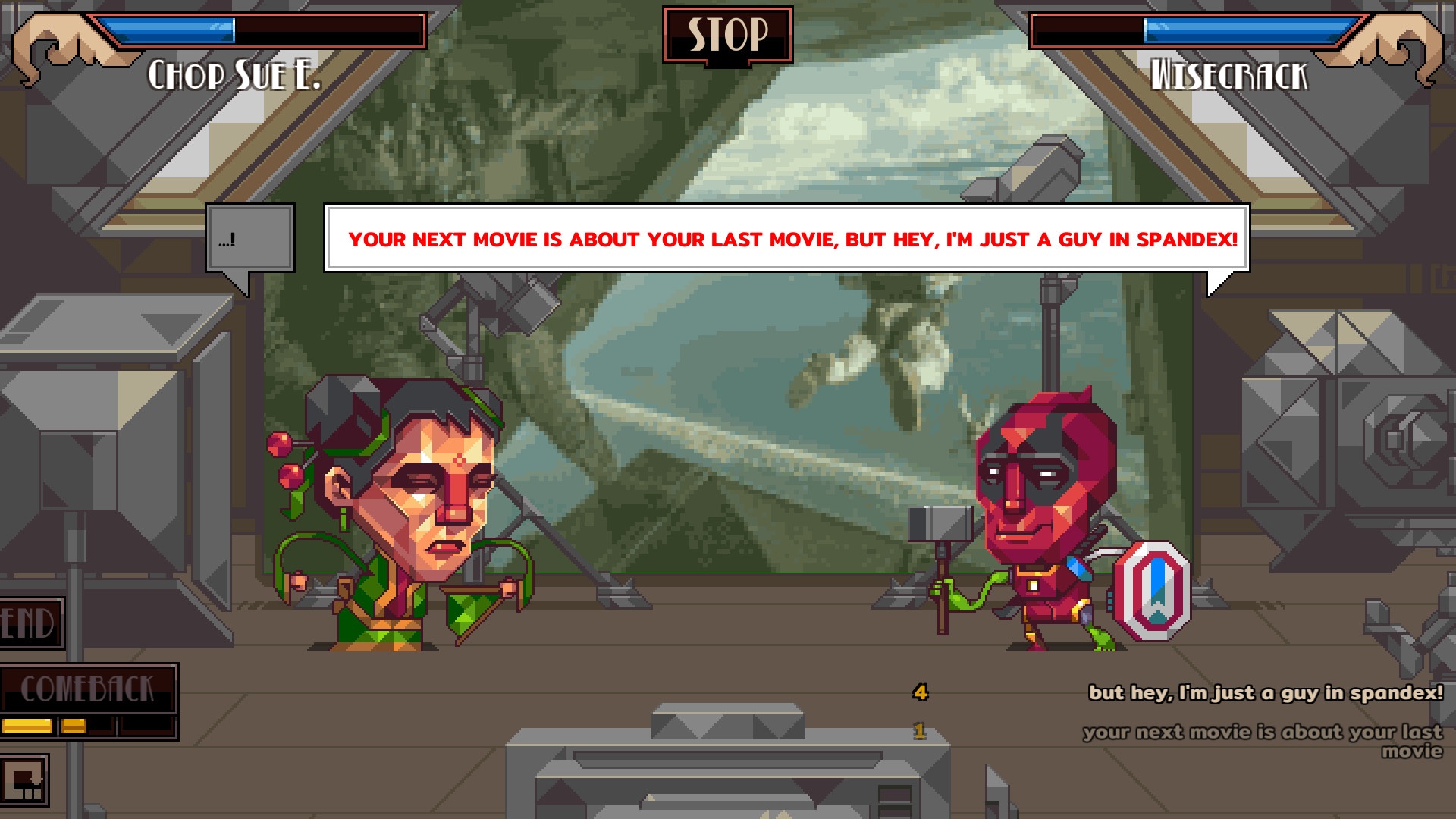 After 2016’s breakout indie insult simulator, Vile Monarch are back and this time they are going to Hollywood. Oh… Sir! The Hollywood Roast pits two snarky stars of the silver screen against each other in verbal duels. Anyone familiar with the original will find themselves in familiar territory, so to what extent is this a ‘replicant of yet another reboot’ and how much original material does it have to offer?

The basic gameplay is the same. After the opening exchanges of the intro, you enter a head-to-head exchange of insults, crafting each sullied sentence one word or phrase at a time. The options are presented in the middle of the screen and both players can access them. Each player also has two extra phrases up their sleeve that can be whipped out to add insult to insult. A basic knowledge of grammar is needed here to make sure your sentence actually works. Simple conjunctions like ‘and’ and ‘but’ can also be used to extend and/or double up the tirade.

Once both players have completed their insults, they hurl them at each other (verbally, not literally) and are awarded points based on the sense and severity of the sentence. The score is deducted from your opponent’s health bar, and the first player to reach zero loses. So far, so familiar, so how does this game differ from its predecessor? 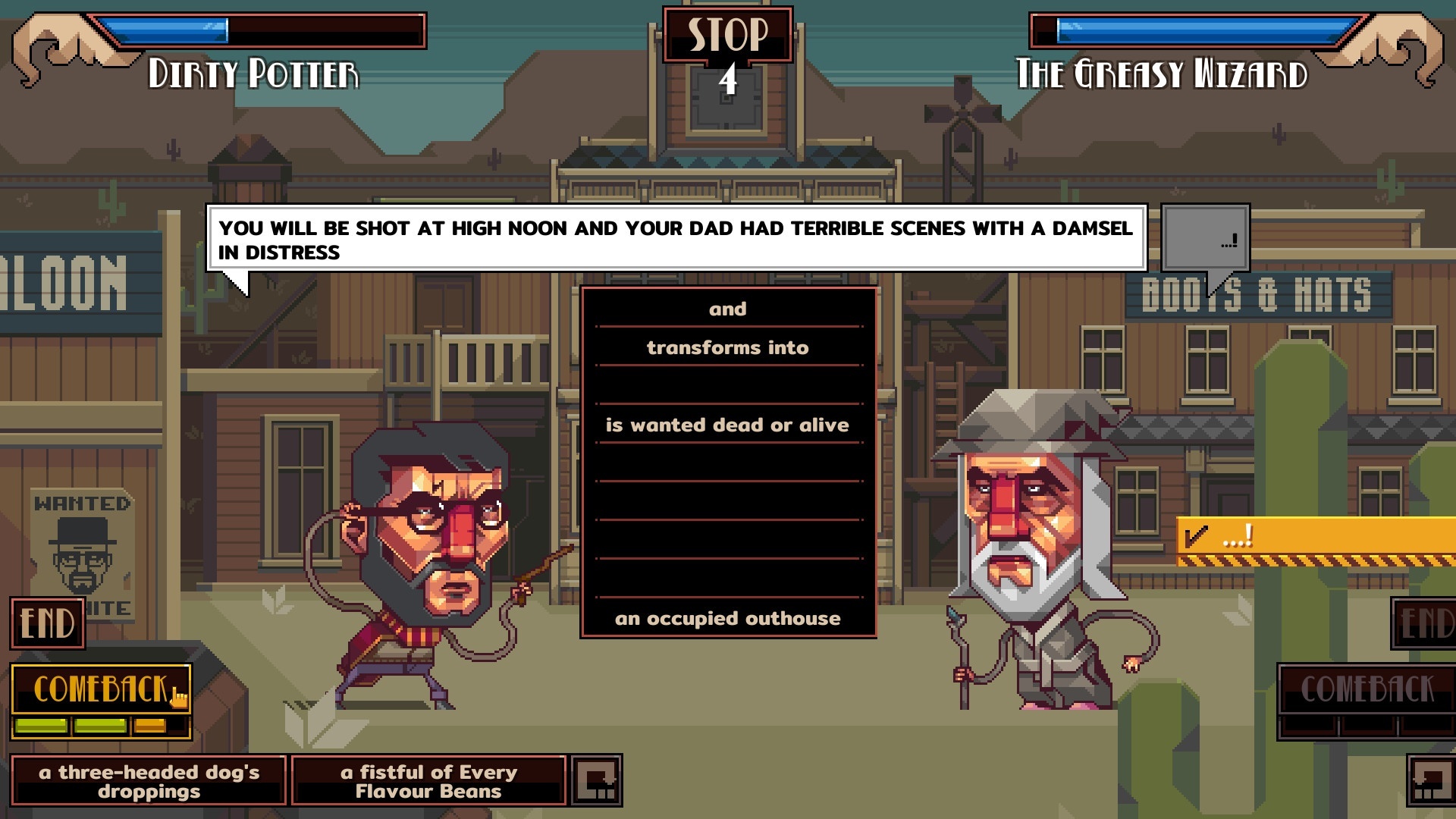 Visually, the game retains a familiar style with caricature avatars against eight-bit backdrops. However, in place of the original game’s generic characters and settings, this version presents plenty of cinema stereotypes and references. We are presented with an array of washed up, self-centred, and personally insecure Hollywood types ranging from miserly movie moguls to arrogant action heroes and washed up wizards to glamour grannies. Each character is distinctive in its own way and it is easy to identify the inspiration. The only one that doesn’t quite fit is ‘Dirty Potter’ – while he has the wand, glasses, and scar on the forehead, the middle-aged look complete with beard and gruff American accent seems out of place.

Also fitting in with the Hollywood theme, there are a lot of movie specific references targeting movies, looks, co-stars, finances, and many more. There are also lines relevant to each character and backdrop, citing movies they are known for and repurposing popular catchphrases. Each character has their own insecurities, which you can learn and exploit. The veteran actress, for example, takes particular umbrage at any comments on her looks, while the generic superhero reels at any suggestion of lack of originality. Insults using exploiting these weaknesses add a bonus to your score.

Extra points can also be gained from choosing the same subject on consecutive exchanges. Insulting someone’s mum may sound childish but if the option pops up again in the next round, you will get double points for using it again. This adds a basic element of strategy as you target the same topics or steal one to prevent your opponent from reusing it. 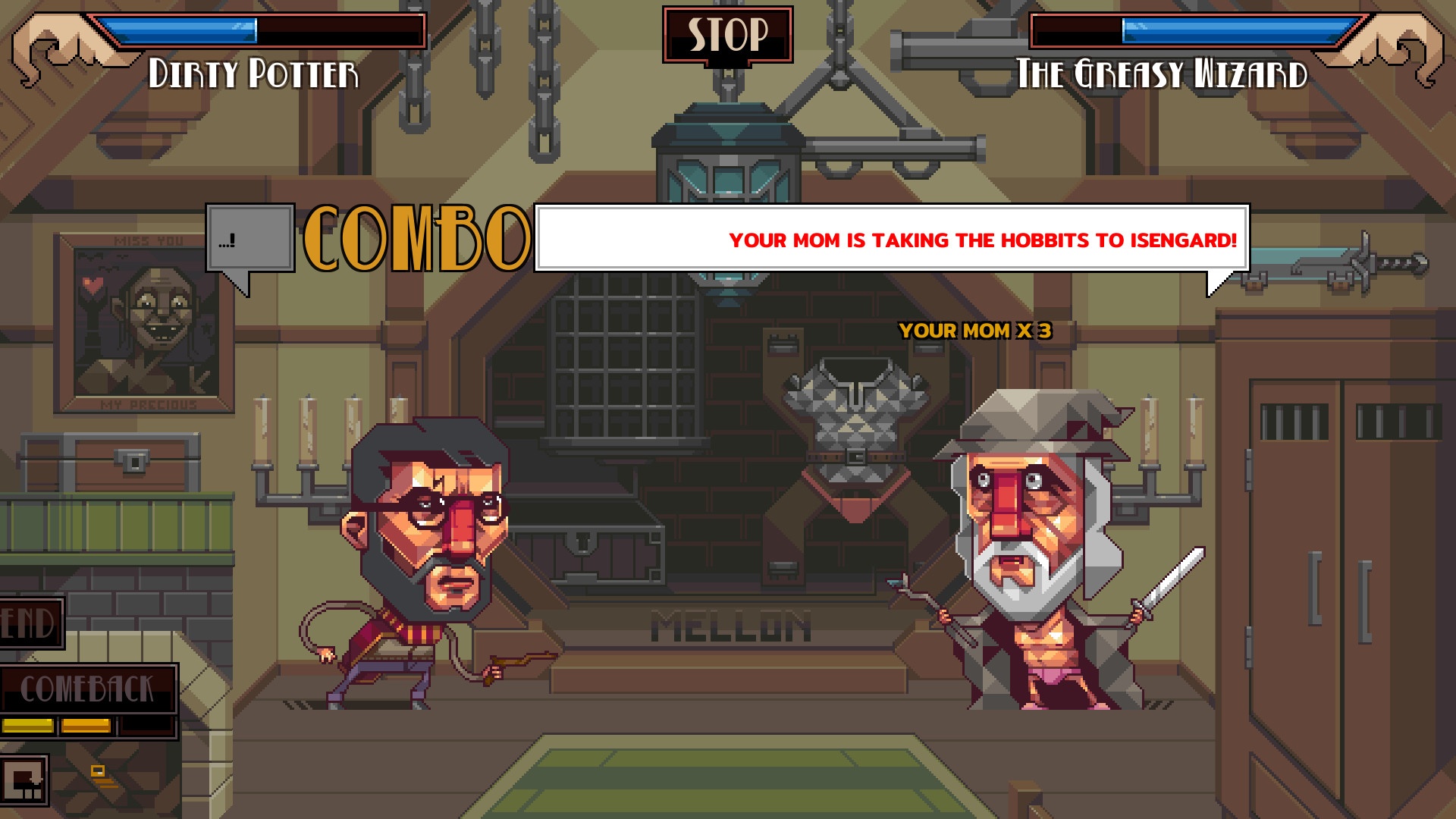 The insults themselves are often amusing and nearly always bizarre. The game advises that it is best to deliver a line that makes sense for more points (‘Your dog is a reboot of your last movie’ won’t garner many points, for example). However, as mentioned above targeting those insecurities and/or revisiting the same topic will often get you enough points to suitably roast your opponent as will using conjunctions to pile on the misery.

The game presents options to play in single player, local multiplayer, or online multiplayer modes. Working through the ‘career’ mode (guiding one character through several verbal jousts up to and including the movie mogul boss) allows you to unlock more characters and backdrops for multiplayer clashes. You can also earn ‘golden parrots’ for completing certain tasks within each roast. Beating your opponent on its own is always enough to advance but to unlock more you have to get those other parrots. Several of them are easy to get (by putting together an insult worth more than 35 points for example), but some of them can be tricky to obtain through no fault of the player. On some occasions, the player is challenged to earn double points from reusing the same topic, but it is not always guaranteed that the same topic will come through from one exchange to the next. You might also be tasked with using three comebacks only to find your comeback meter never fills up enough to do so. It can get quite frustrating when you miss out on an achievement because you simply didn’t get the chance to attempt it.

Despite these minor flaws, Oh… Sir! The Hollywood Roast is a fun game to play and is one that keeps drawing you back in (especially to go for those achievements that you were not given a chance to earn on previous playthroughs). The bank of phrases is larger than the original game leading to less repetition and the character/setting specific lines make for a more coherent gameplay experience (even if the characters themselves are not always coherent). If you enjoy casual indie games with a sense of humour, this little title will be worth your time and money.